The Girl Who Cried Wolf 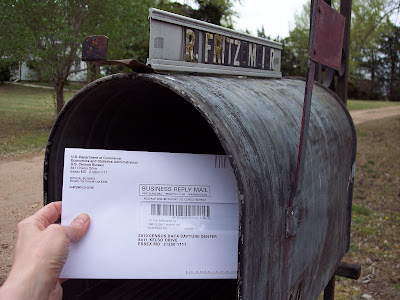 I can hardly believe it. I feel a little like the boy who cried wolf.

The 2010 U.S. Census arrived in my mailbox yesterday.

Granted, it was April 16, the deadline for returning the form to Uncle Sam. But I actually got it.

At the track meet on Thursday, I asked a friend whether she'd gotten her census form. Yes, she said, she got TWO! I told her she must have gotten mine.

I just found out my sister in Chicago got 6 forms. Yes, 6! Come on now! Chicago doesn't need any extra help with its count.

Ironically, our daughter and son-in-law in Omaha didn't get a census form either. It must be a conspiracy. They just didn't want to count Fritzemeiers.

But then, on Friday, there was my census form.

Since it was less than a week after I "talked" to the nice, automated census lady, I am left to ponder:
Like any true blue American, I tore open the census and started to do my patriotic duty. I was not supposed to count anyone who:
With only two people at home, it took less than the advertised 10 minutes to complete. I was amazed there were spots for 12 people!

If there were 12 people living in this house, I would not have been counted. I would be at the nearest mental treatment center - which, by the way, was not included in the list of people not to be counted.

And another thing to ponder: What do Jim Bob and Michelle Duggar do? I think they are at 19 Kids and Counting on their TLC television show. Once they were done with the 12 spots on the census, what did they do with the other 9 kids?!

Well, enough pondering. I am headed out to put the completed census form in my mailbox.

Because, unlike the federal government, I know all about making deadlines.
Posted by Kim at 8:00 AM

Email ThisBlogThis!Share to TwitterShare to FacebookShare to Pinterest
Labels: life