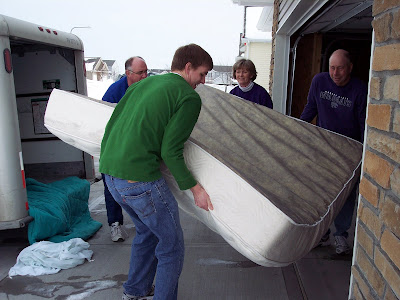 The Mom and Dad Moving Co. caught a break last week. A moving company with a real logo and a bonafide truck pulled up to Jill and Eric's house in Omaha last weekend for the first leg of their move from Big Red country back to the Sunflower State.

Back in February 2010, I seem to recall the two dads saying this was their swan song when it came to providing moving services. Thankfully, Eric's new job included a provision for moving expenses. That's a fringe benefit I can really appreciate. (Eric's parents did end up with a truckload of possessions the movers wouldn't move and will serve as a way station while Jill and Eric wait on the go-ahead to move into their new home in Topeka.) 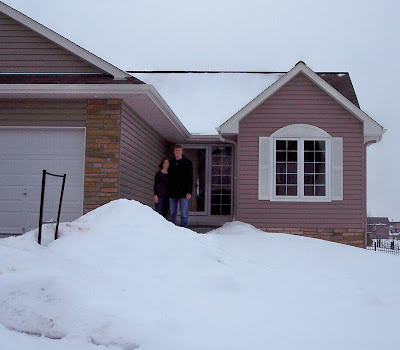 An aside: I just thought I'd use this photo so it might cool all of us off. On the day Jill and Eric moved into their Omaha house in February 2010, there was a lot of snow. Eric's dad Alan tried to find their back patio with a snow shovel. He gave up. Snow sounds good right about now.

However, last Saturday, as the thermometer teased the 100-degree mark and the humidity was off the charts, I was ever so thankful that there were three young guys sweating instead of me.

The moving company didn't get me out of the cleaning detail. But it was still cooler inside cleaning, even after the door had been propped open for six hours.

Jill and I felt sorry for the movers. However, we were both of the opinion that they could have saved themselves a few ounces of sweat by showing up at 8 o'clock instead of 10:10. We did offer plenty of ice water.

And I did feel somewhat guilty sitting there reading my book. I got more reading done while the packers packed on Friday and the movers moved on Saturday than I gotten done in a long time. (We even had time for the first round of maternity clothes shopping!)

One of the movers was a young guy named Juan. He looked like he was still in high school. As the morning turned into afternoon, Jill asked him if he was still in school.

Juan said he had dropped out of school because he had a daughter. But he was seriously considering going back.

I've always thought that any job can teach us life lessons like that. The summer between Brent's sophomore and junior years at college, he worked in Manhattan making t-shirts.

There was nothing wrong with the job. He collected a paycheck, though he ruined some clothes along the way with the ink. He and a fraternity brother worked in the un-airconditioned work zone all summer long.

And they both learned that they were glad to go back to school in the fall and ultimately work toward those bachelor's degrees. Still other internships helped Brent figure out he was on the right career path, and he' s now working towards his master's.

We all have those "a-ha" moments along the way. They are the signposts that point our way to the future.

So, I hope Juan really follows through and goes back to school ... not only for his own sake, but as an example for his young daughter.

There's certainly no shame in manual labor. And maybe Juan will work himself up and become the supervisor. But striving to be the best you can be is an important crossroads - no matter your age or station in life.
Posted by Kim at 7:00 AM