I was super excited about the Super Moon ... until I was super disappointed in my photos.

I'd seen gorgeous photos of the Statue of Liberty in the rosy blush of the rising moon. (Other photos are at this link.) A jet plane looked like it was cruising right onto the moon itself. A runner looked like he had the moon nipping at his heels like a faithful dog.
Here on the County Line, sunset Saturday night was obscured in clouds, so I thought we might not see the moon at all. It finally did appear, but then it played hide-and-seek in clouds.

My grandiose ideas to capture the moon and the combine resulted in little more than eyes full of chewed up wheat straw and chaff as I stood downwind to get the "perfect" photo.

However, when I consider that the moon was still 225,623 miles away, I guess I might as well be happy with my little beacons of light in a Kansas wheat field. (Much of the time, the moon orbits at 238,855 miles away from Earth. Is it any wonder that being 14 percent bigger and 30 percent brighter didn't get the job done on my little point and shoot camera?) 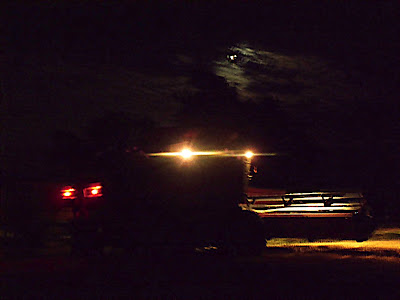 My efforts paled in comparison to professionals and amateur shutterbugs alike. As Randy often tells me: