Cut for a Cure


It’s not every day you see a pink corn header on a Case combine. But during this upcoming fall harvest season, that pink header will be Cutting for a Cure in Central Kansas. A few weeks ago, Clarence Patmon, who is a shop foreman at Pihl Repair and Farms near Falun, was servicing equipment in preparation for fall harvest. And he had an idea. He wanted to give farmers a chance to help fight cancer through donating part of their corn crop. But he wasn’t sure how to get it done. He approached one of his boss’ wives, Karla Pihl, who has done seven Susan G. Komen Walks for the Cure all across the country. And Cut for a Cure was born.

In Cut for a Cure, farmers will donate a strip of corn - the width of the header - to the cause. Clarence and Karla had other help, too. Besides farmers, Karla and Clarence have gotten help from all of the Pihl Repair and Farms family, staff and managers. They’ve gotten area support as well. Curtis Barnes of Anderson Body Shop in Lindsborg donated the paint and painting of the header. The mission hits close to home for him, since his mother-in-law Shirley Bloomquist is a cancer survivor, who hopes to ride along with Clarence Patmon during the pink header harvest.

Justin Kinderknecht, owner of JustIn-Sane Graphics, of Salina, donated the vinyl lettering spelling out Cut for the Cure on the front of the header. Straub International in Salina donated parts to refurbish the corn header.

When I talked to Karla on the phone last week, she said the project has gone from idea to pink combine header in just 3 weeks. Right now, five farmers between Lindsborg and Salina have committed to leaving strips of corn in their fields to be harvested by the pink combine header. Karla plans to follow up with other farm families where she’s left messages, and she fully expects more farmers to participate. This year, the grain will be taken to the Mid-Kansas Co-op elevator in Lindsborg.  The grain will be sold to help patients at the Tammy Walker Cancer Center, in Salina, and the Pink Fund at Lindsborg Community Hospital. The money will be used to help patients pay for expenses not covered by medical insurance, such as fuel for driving to medical appointments, meals, hotel stays and purchase of wigs. 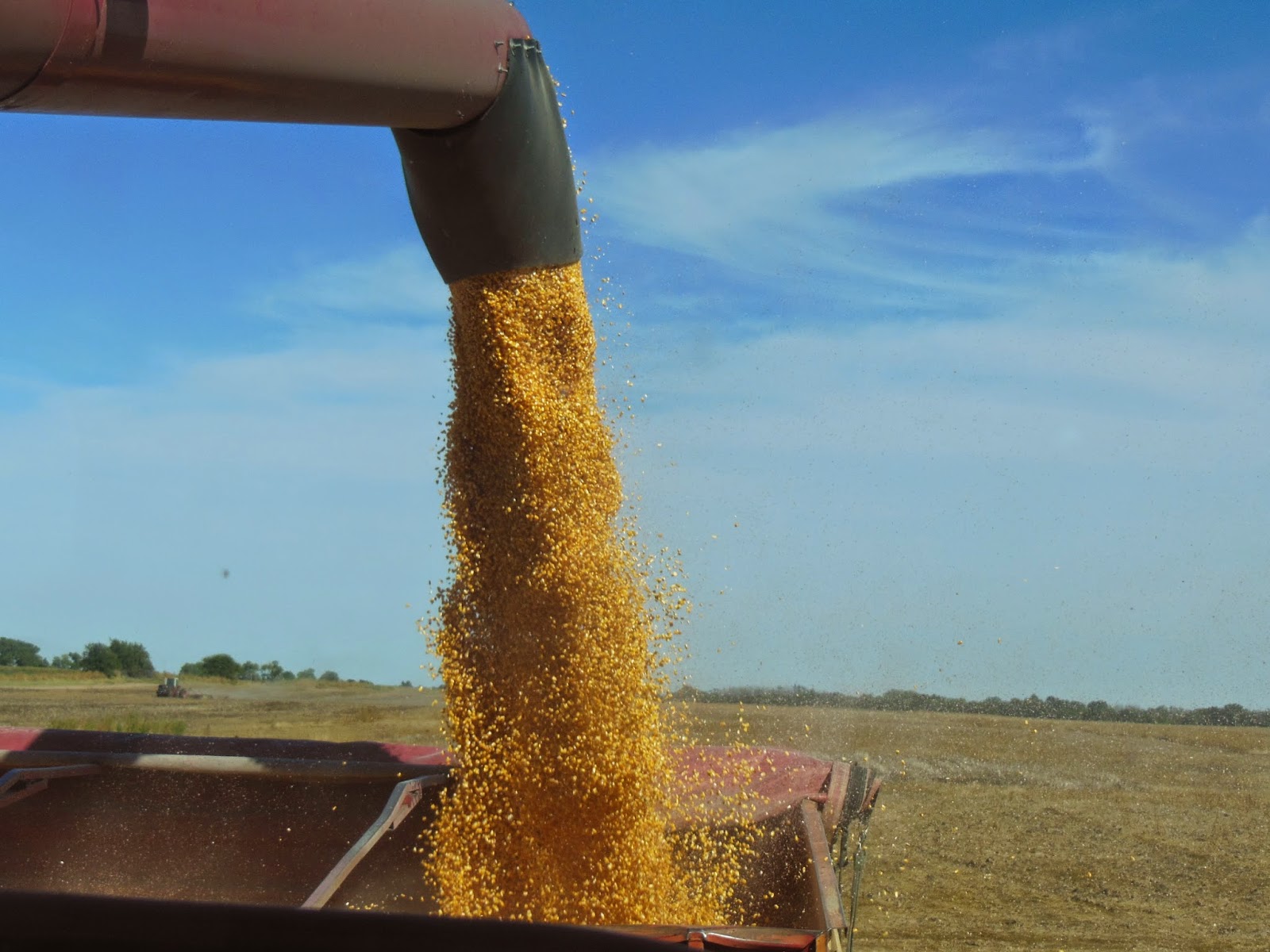 While she’s been working on breast cancer awareness through the Susan G. Komen Walks for several years, Karla is excited that this money will stay in Central Kansas to help area families. Ironically, she says, just as news of the Cut for the Cure was getting out in the area, her husband’s cousin received a chemotherapy treatment for cancer this week at the Tammy Walker Cancer Center. Karla’s sister-in-law, Sue Pihl, of Assaria, has also fought cancer and is part of Karla’s continued commitment to helping fight the disease.

This year, Cut for a Cure plans to have the pink header working in the McPherson and Saline County vicinity exclusively. But Karla believes the idea could grow in coming years – either with their own Cut for the Cure header or if other farmers and farm communities take on the challenge and build the program in their own areas.

In conjunction with the Cut for a Cure fundraiser, Karson Pihl, the 9-year-old son of Karla and her husband, Kendall,  has decided to collect full ears of corn to sell as squirrel food. The squirrel food will sell for $7 for a bag of eight to 12, or $15 with a squirrel corn feeder. Karson's grandfather, Don Pihl, is heading the feeder construction.

Clarence and the Pihls will participate in an annual Cancer fundraiser in Lindsborg next month. The Battle of the Buses is September 13 in downtown Lindsborg. Traditionally, a big mammogram bus and a pink fire truck have taken center stage during the fundraiser, which benefits the Pink Fund at the Lindsborg Community Hospital. This year, a big pink corn header will be there, too.

It just goes to show you how one little idea can grow in a place like Central Kansas.

NOTE:  Thanks to Tim Unruh of The Salina Journal for telling this story first. He also generously shared his photos when I asked. I read the story in the paper online and then followed up by calling Karla myself.
Posted by Kim at 7:50 AM