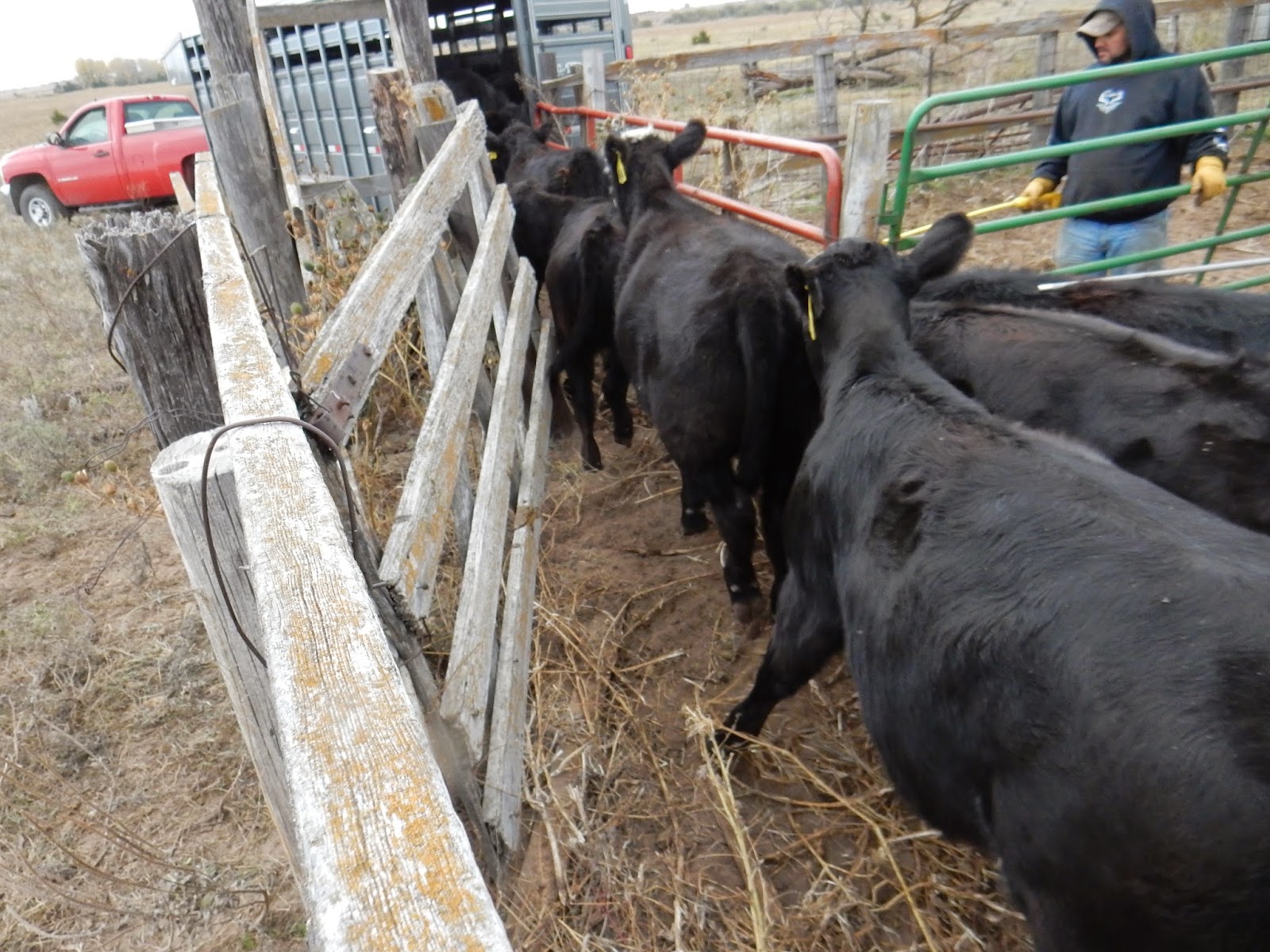 I'm not a fan of going to the doctor. I know it's supposed to be the male species that avoids medical intervention, but in our family, I am the one dragging my feet.

Still, the studies show that going to the doctor for routine physicals and preventative care keeps you healthier in the long run. It's true for adults and for our children. And it's also true for the bovine inhabitants of our farm.

After we gathered the calves from their summer homes on the Ninnescah and Rattlesnake pastures, it was time for their doctor's appointments. Hutchinson veterinarian David Harder and his assistant came to help us "work" the calves. The calves go down a lane and into a squeeze chute. 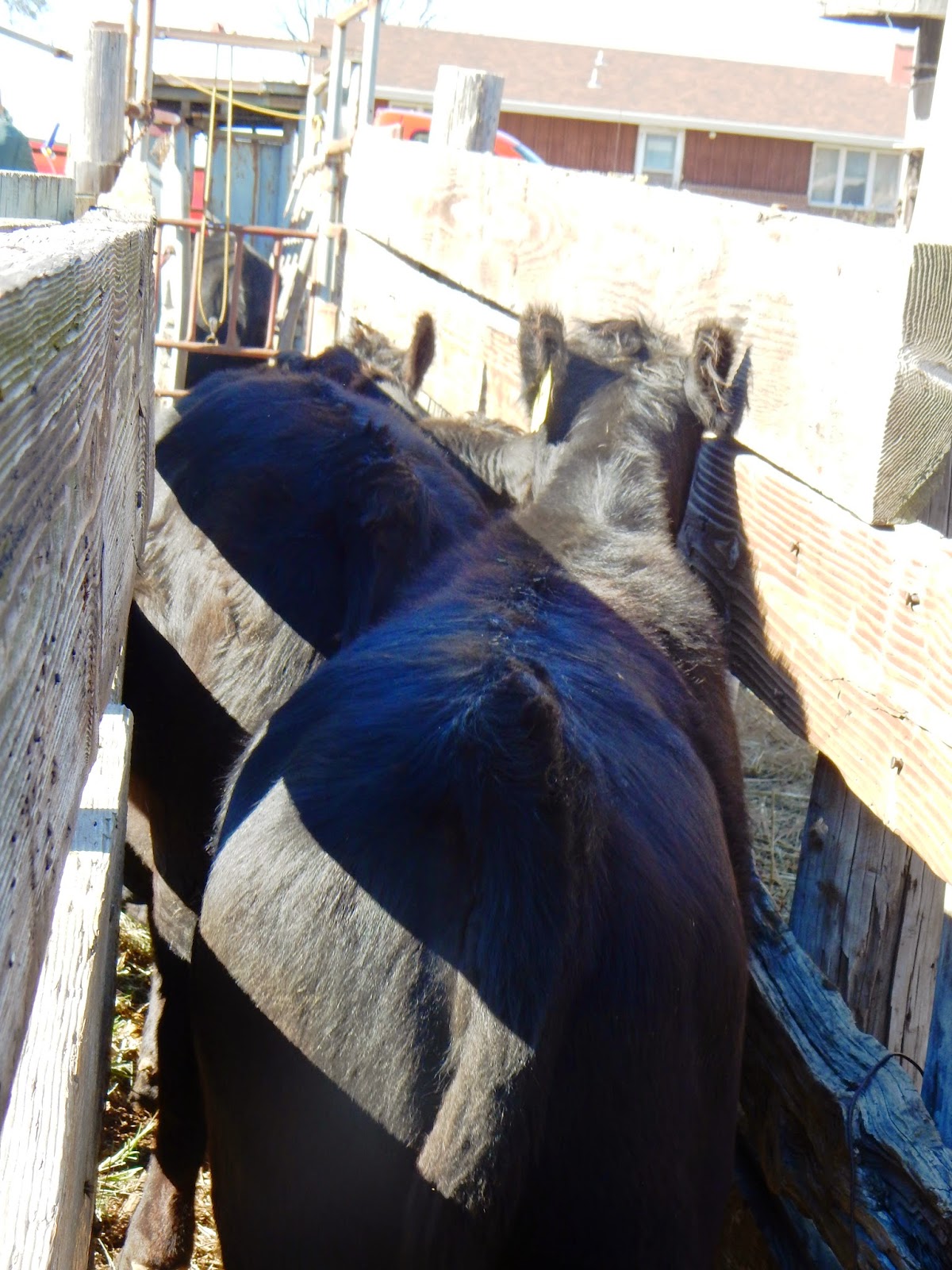 We use the chute to safely restrain the animal and also to keep the people involved safe. Dr. Harder lowered a panel in the chute to check and see whether the "patient" was a boy or girl. 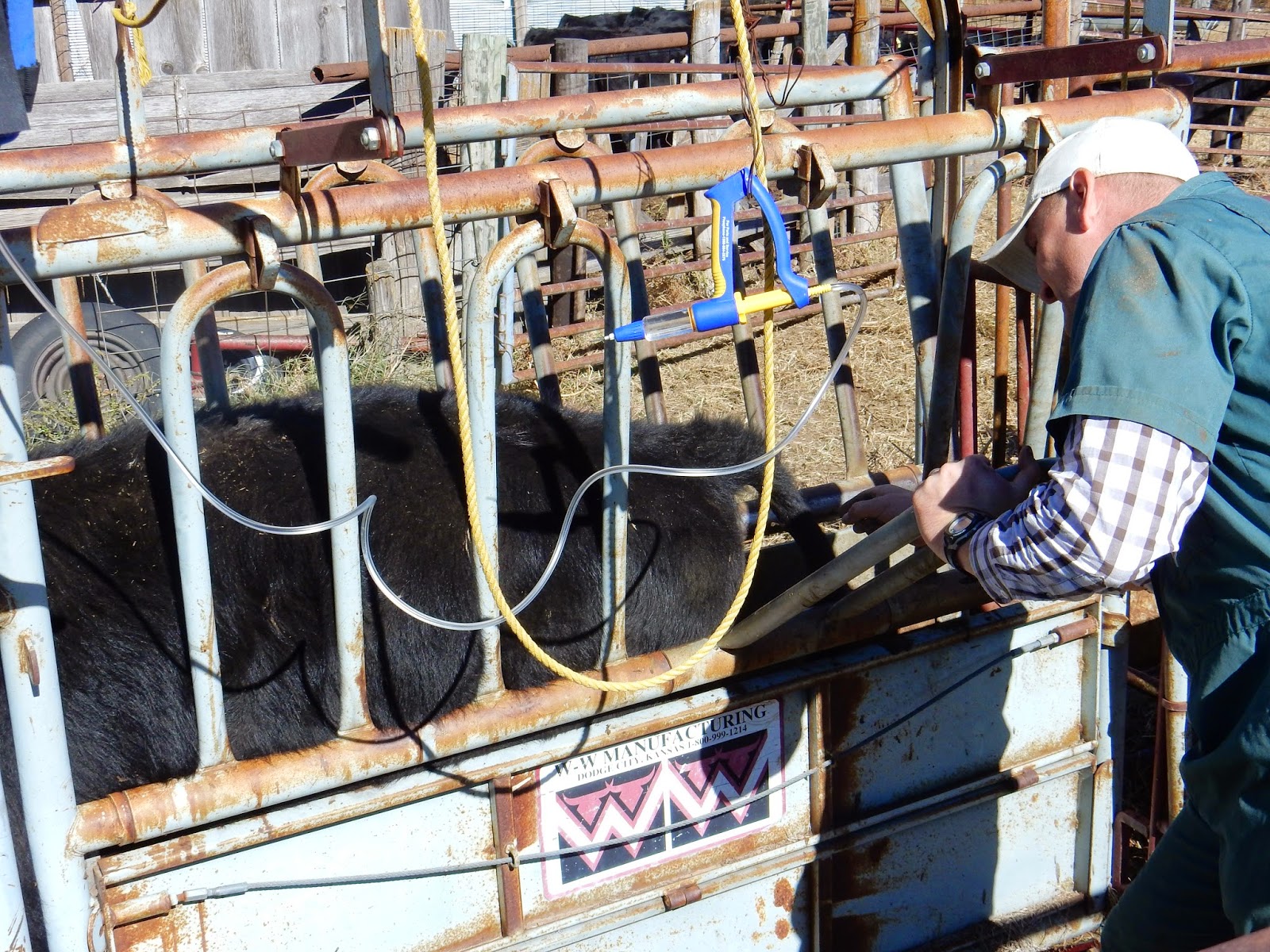 He had syringes in both hands, giving the calves shots to prevent blackleg and PBD (persistent bovine diarrhea). 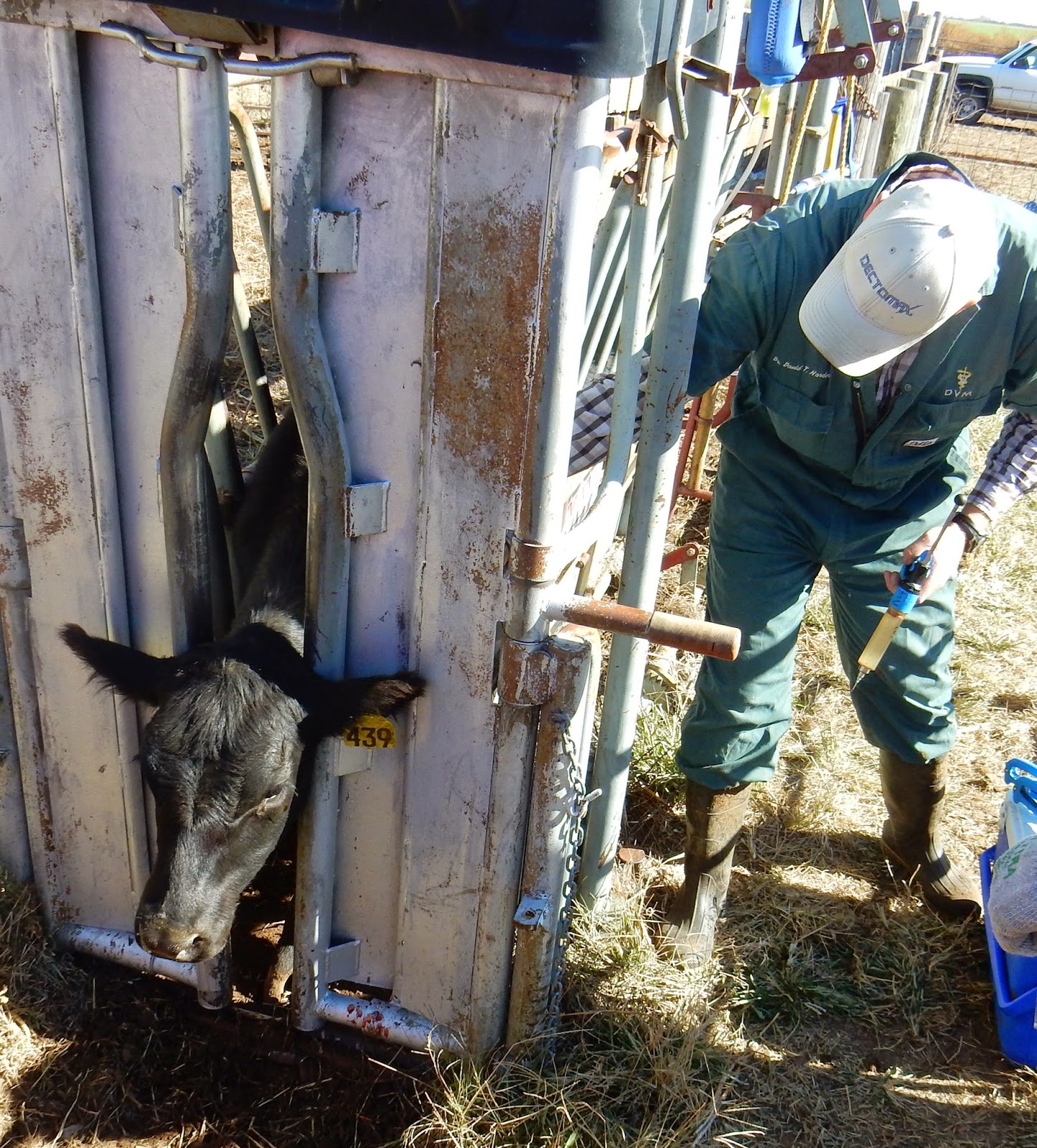 He also gave a shot to control parasites inside and outside the animal. That syringe hung from the chute on a gerry-rigged baling wire hanger. What would we do without baling wire on a farm? They kept the medications cool by storing them in a specially-fabricated cooler. Other supplies were in a caddy hung over the fence, so they were ready to grab quickly. 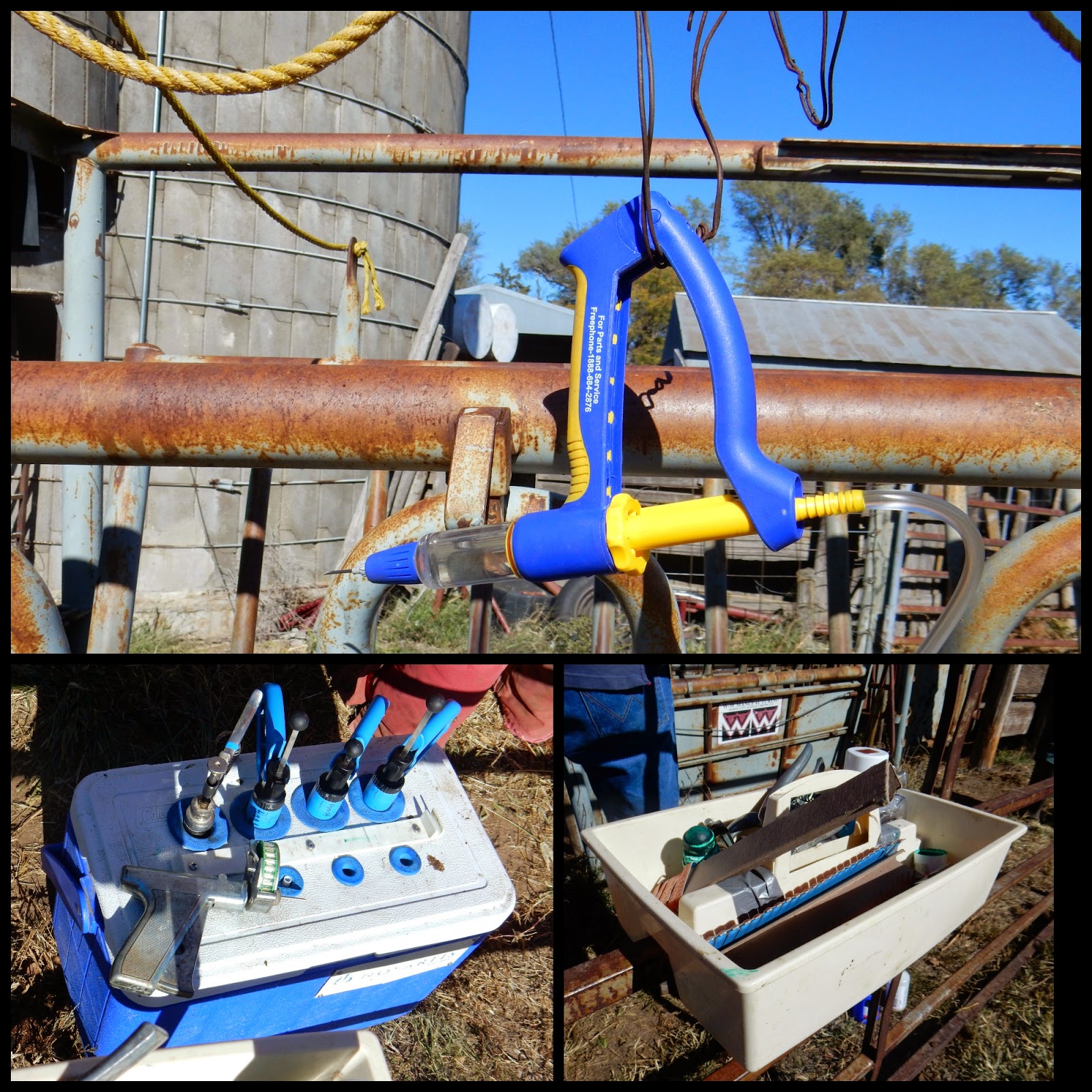 Some of the heifer (girl) calves will eventually become part of our cow-calf herd. Randy identified the heifers he wanted to retain for our herd, choosing the ones in good body condition and good confirmation. Dr. Harder gave those heifers a calfhood vaccination to prevent brucellosis, also known as "bangs." This disease causes abortion or premature calving. The vaccination must be performed by an accredited veterinarian, in compliance with state and national regulations. 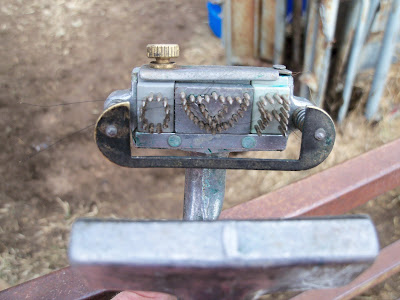 Dr. Harder used a device to "tattoo" the animal to show it had received the brucellosis vaccination. Then he used green ink to mark the tattoo. 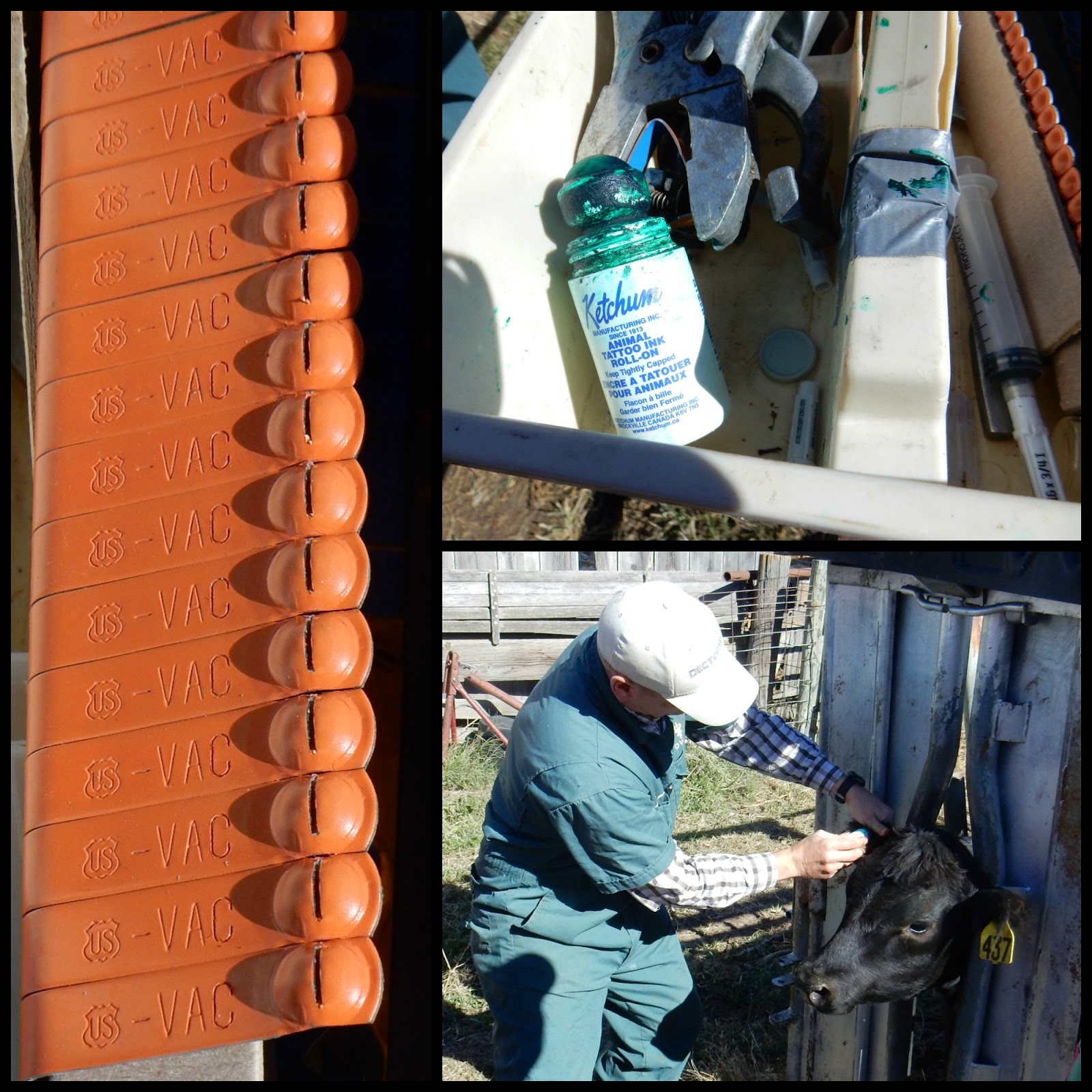 A few of the calves had lost their yellow identification ear tags, so Randy put in new ones. 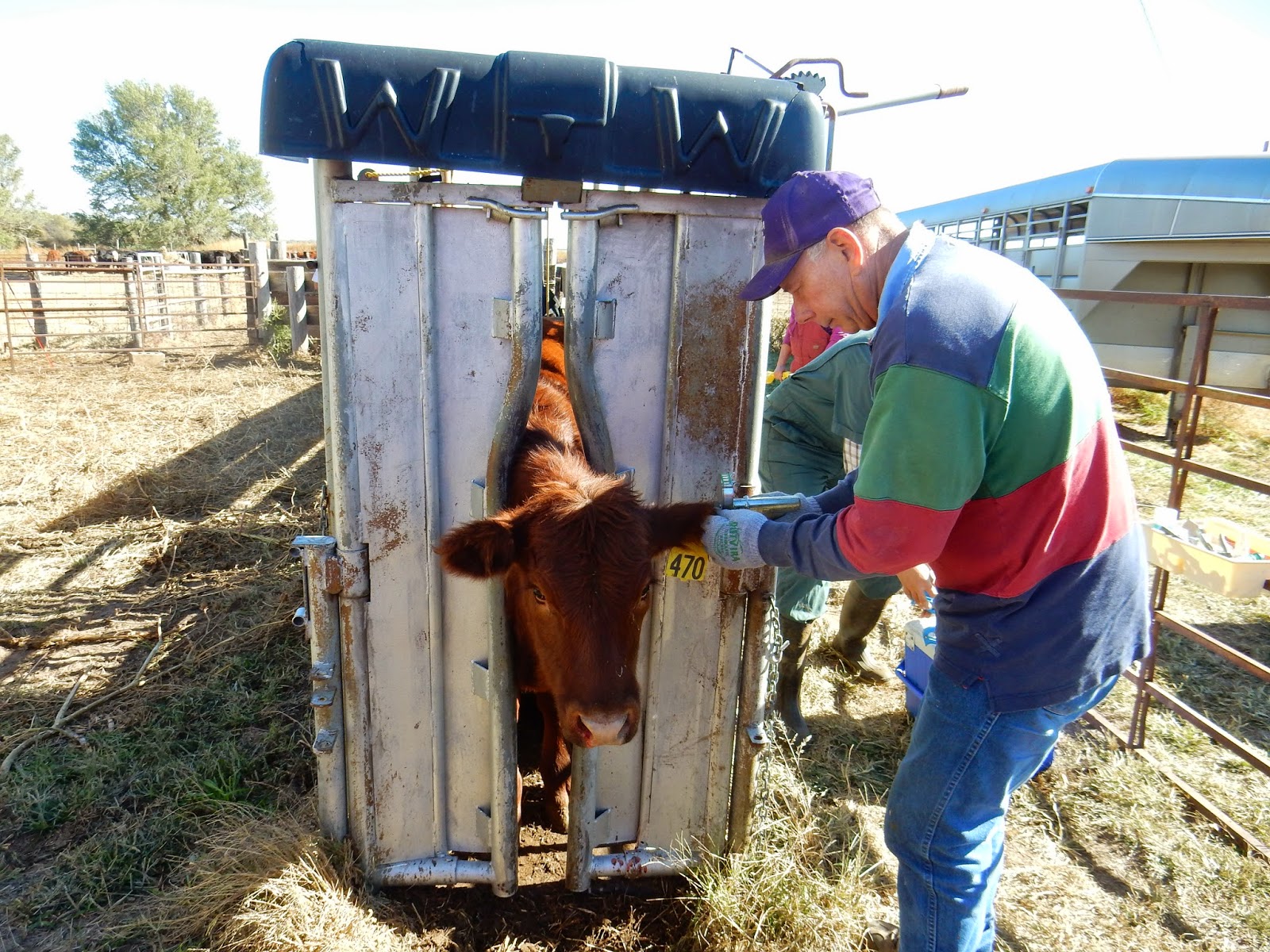 They also gave a growth implant to steers and to heifers we didn't plan to keep for breeding. 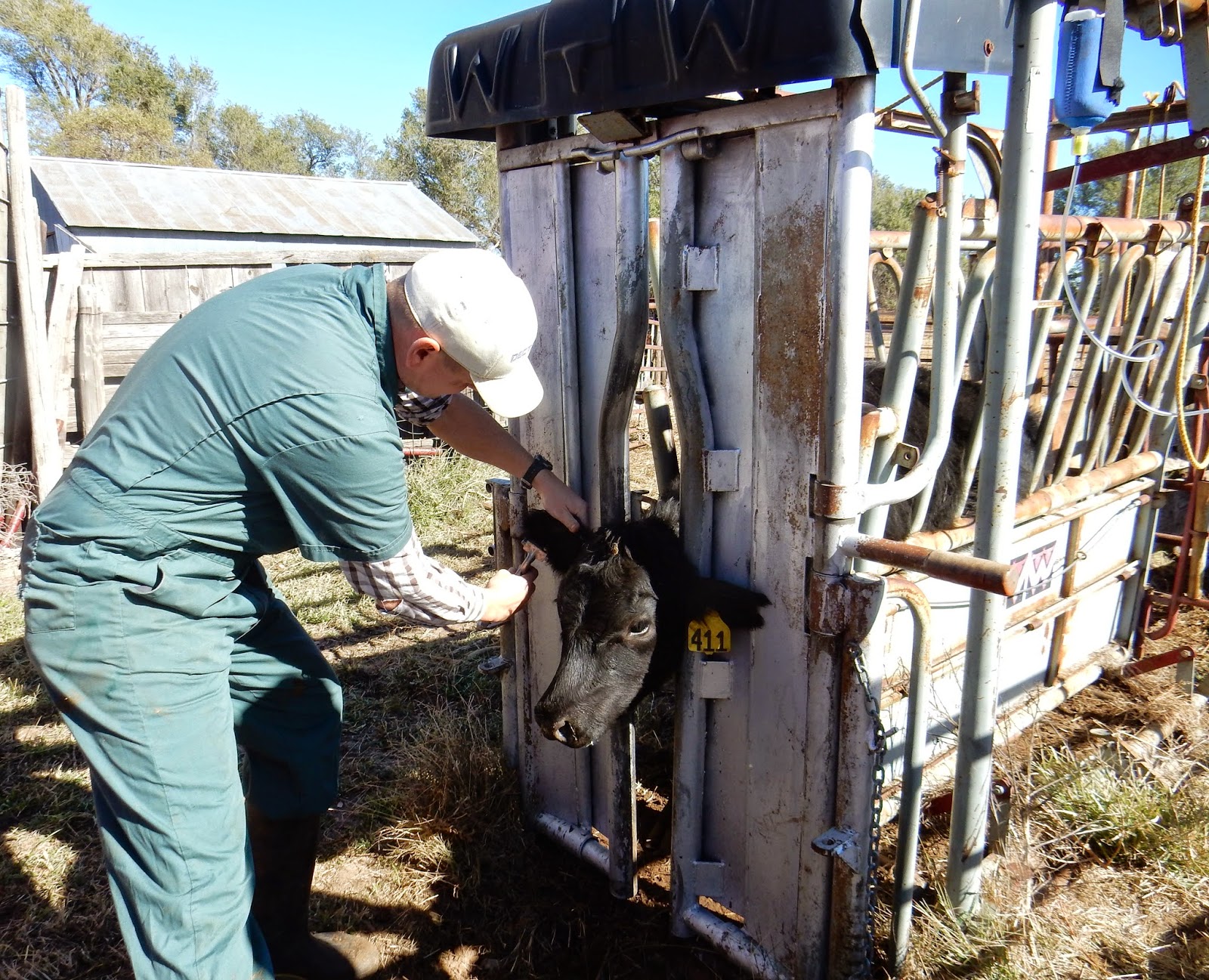 Like keeping a patient record for humans, the assistant recorded the "office" visit, making note of the calves we calfhood vaccinated. 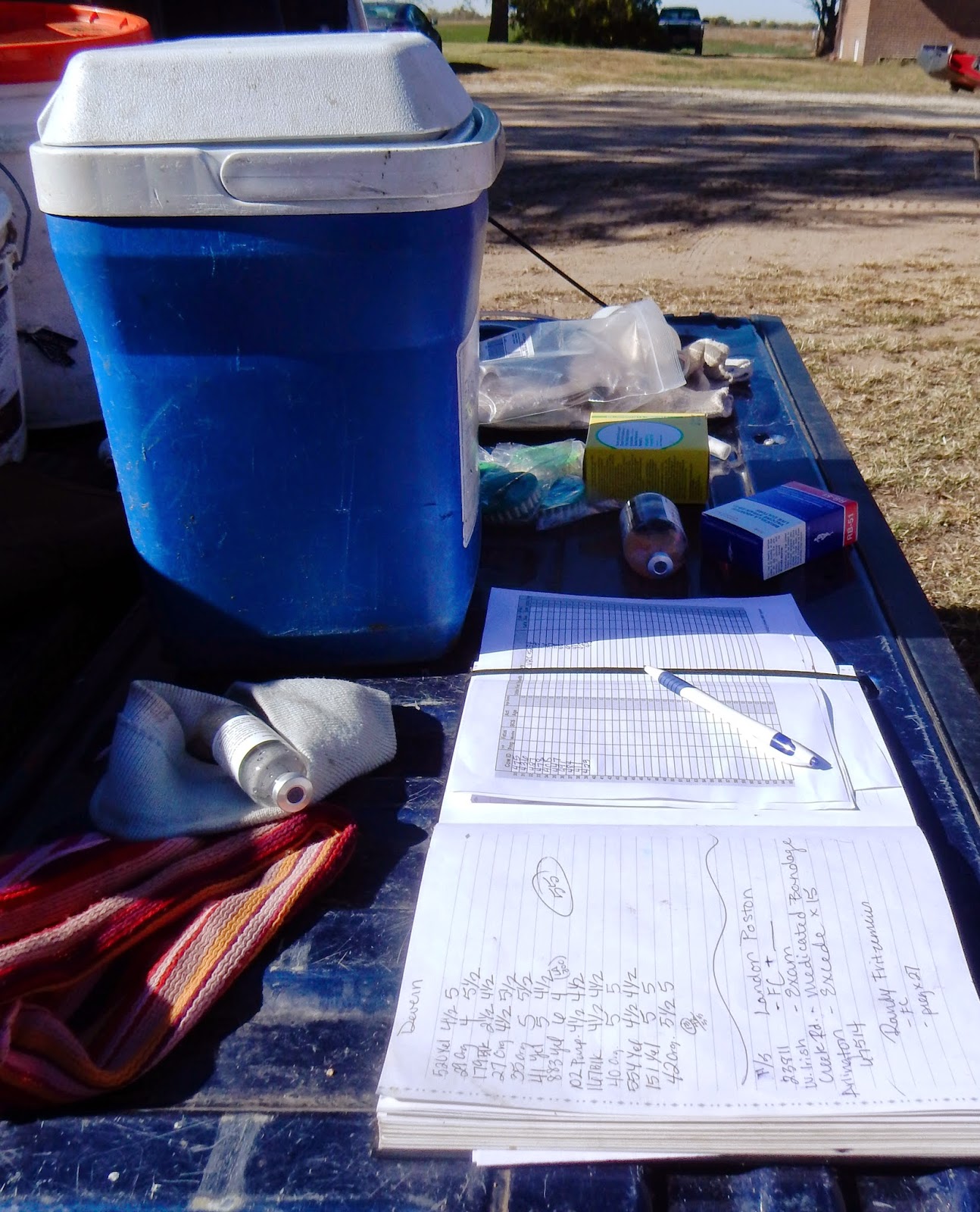 We keep the weaned calves in the corrals for a couple of weeks to get used to being separated from their moms. It also gets them acclimated to eating hay and silage. 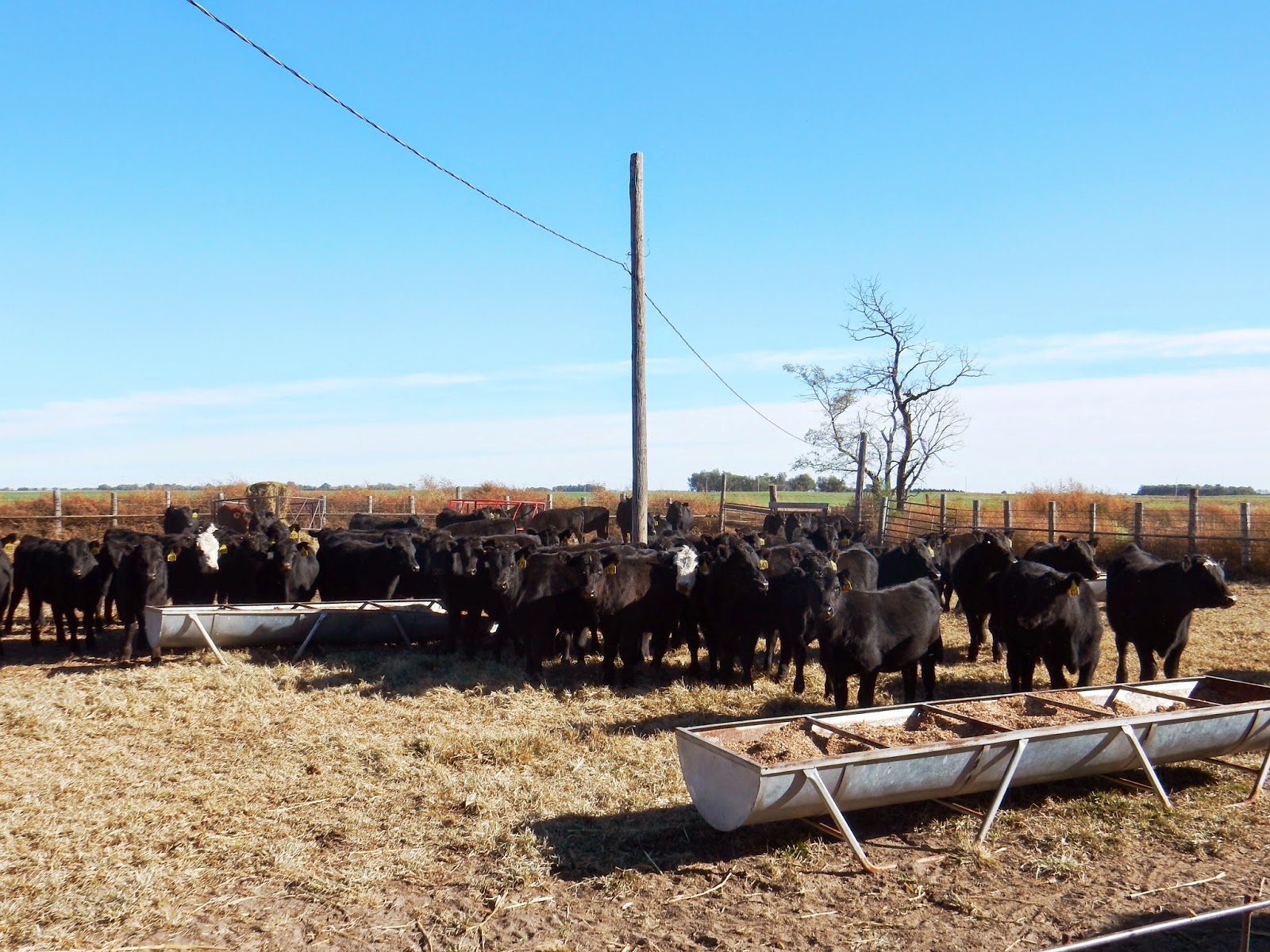 They are less likely to be "spooked" by deer or other animals when they are in the corrals, which reduces the chance of them breaking through a fence.

We will feed the calves through the winter. In March, we'll sell the steers and any heifers we don't retain for our own herd.
Posted by Kim at 7:54 AM