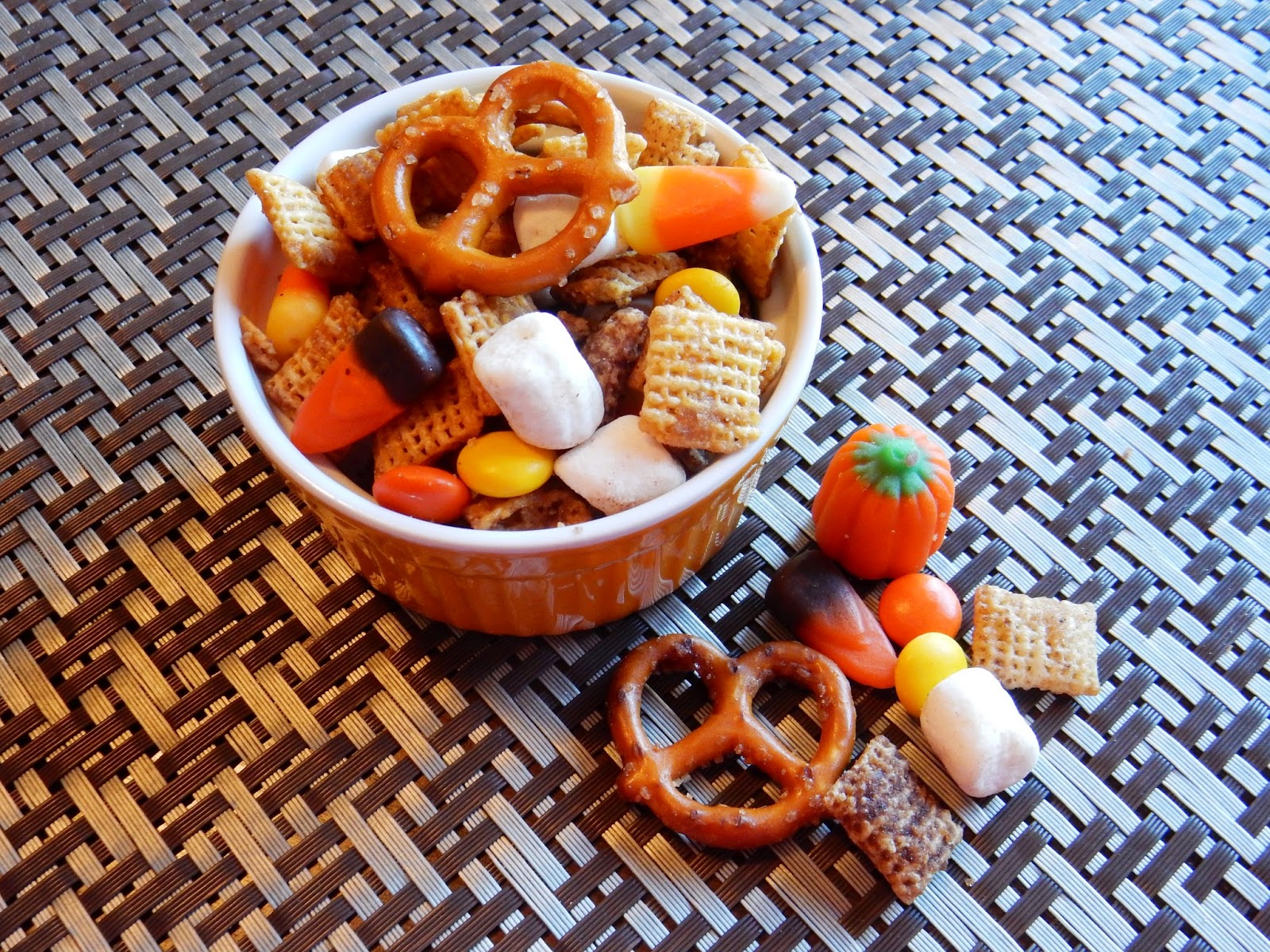 This snack mix is Preschool Approved. It was made by a preschooler (with help from a Mommy) and it was consumed by preschoolers at a Halloween party. 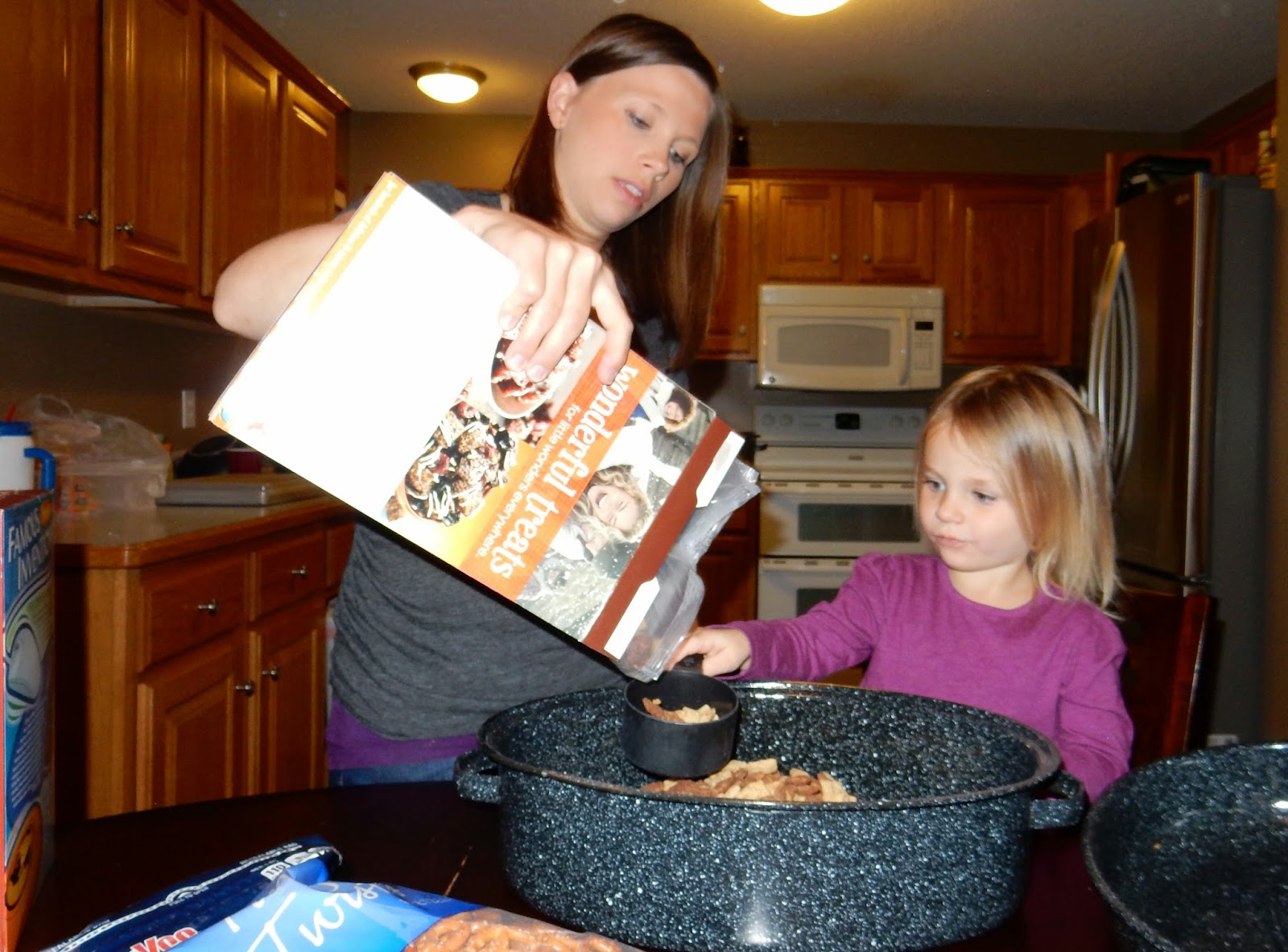 Jill doubled the recipe, so Kinley had plenty of opportunity for counting the cups of cereal and pretzels added. (I remember using cooking as a subtle math lesson when my kids were little. It's fun to see it continue to the next generation. By the way, subtle math is the kind that appeals to me personally!)

While it received the preschool stamp of approval, it is an equal opportunity snack mix. Big people like it, too. I packaged some to sell at our United Methodist Women bazaar earlier this week. I served some alongside the nuts to accompany my refreshments at PEO. And I also packaged some in a pretty tin for a PEO fundraiser.

It's a tasty alternative to traditional snack mix. It's a sweet mix, but it has the added element of cinnamon in the coating. And pretzels give it a little of that salty-sweet taste combo that we all seem to love.

While the colors in the candy corn and the Reece's Pieces are perfect for autumn, this mix could also be adapted for other occasions by using different candies. Add M & Ms in your favorite team colors for a tailgate. At Christmas time and Easter, some manufacturers produce candy corn in seasonal colors, and you could also substitute holiday M & Ms.

But, as is, it would be a fun mix to put in little cups to decorate your Thanksgiving table. Or put it into treat bags and send it home as a favor with your holiday guests. Enjoy! 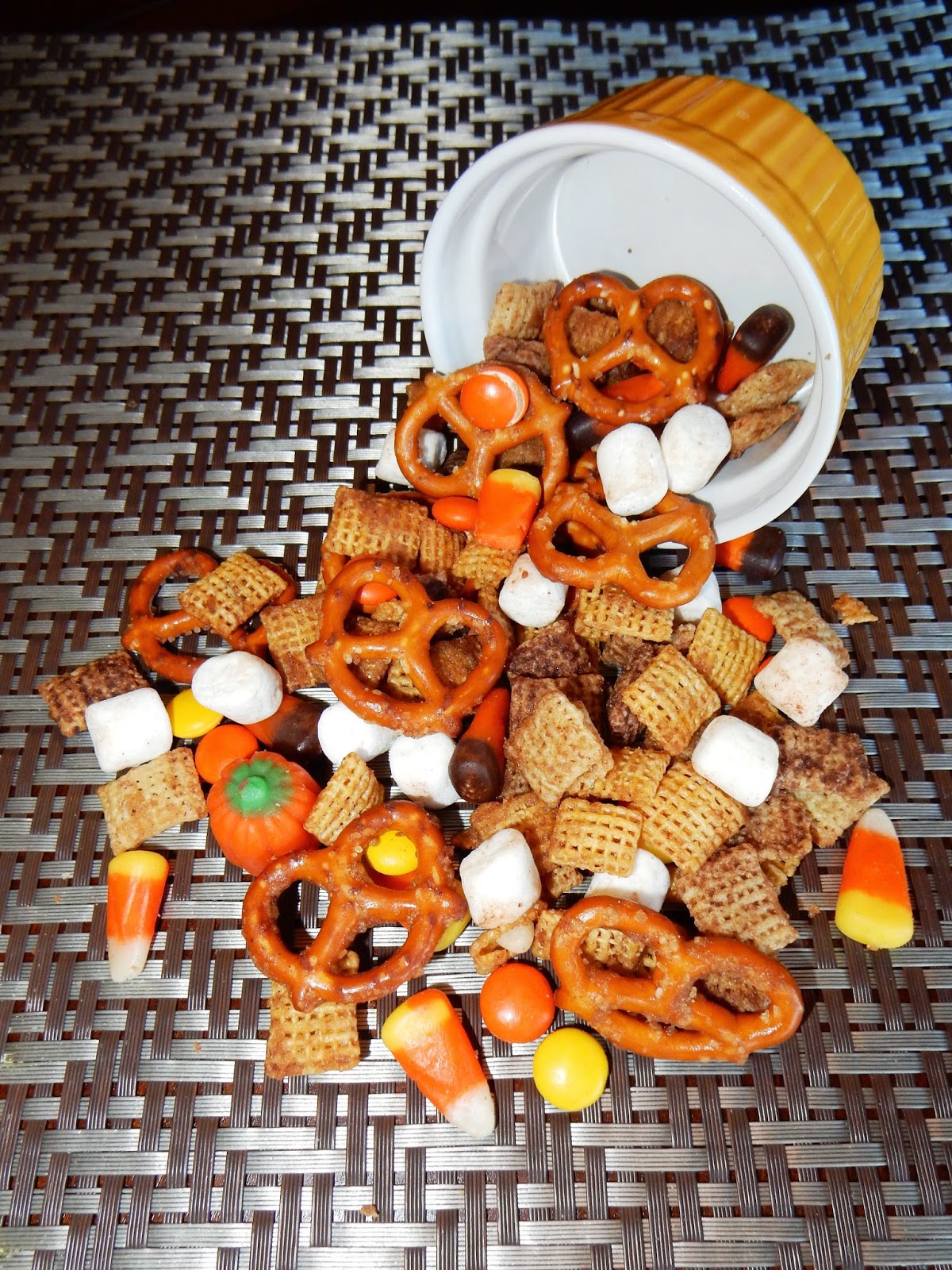 Directions:
Preheat the oven to 275 degrees, Line a jelly-roll pan with parchment paper or a silpat and set aside.

After removing from the oven, allow to cool completely. Then, stir together with the Reese’s, candy corn and marshmallows. Serve in a large bowl for a party or package into small bags to give out to friends.

Notes:  The original recipe called for plain Chex or Crispix cereal. Jill used the flavored cereals, so I did that, too. I used a large roaster pan, which I sprayed with cooking spray, and tripled the recipe so I could use it for the church bazaar and for a PEO fundraising auction. I did bake it for longer, since there was more cereal. If you are doubling or tripling the ingredients, bake for 45 minutes, stirring after each 15 minutes. Turn it out on waxed paper to cool.
Posted by Kim at 8:04 AM