In a Soldier's Own Words 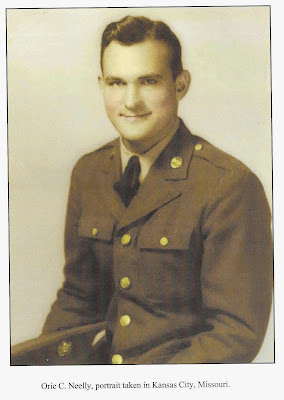 The Army summed up Oric Neelly's service during World War II in fewer than 100 words:

Radio Operator, High Speed. Served for 36 months in European Theatre of Operations: Africa, Italy, France and Germany, as Radio Operator with 1st Armored Signal Battalion. Received orders from Tank Commander and transmitted them to other tanks in the platoon. For 18 months, worked in Radio Control section of the 7th Army receiving and transmitting itinerary communications in Morse Code. Receives and sends Morse Code at the rate of 20 words per minute. Was also operator in Army and Navy Teletype Communications, which was set up to insure the safe reception and transmission of confidential and secret messages. 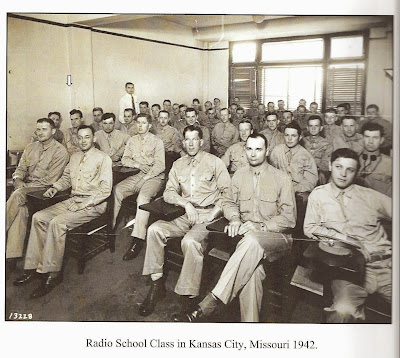 Several years ago, Oric's daughter, Brenda, asked her Dad to record some of his memories of World War II. He decided he'd rather write them in his own hand. She transcribed them and compiled them into a hardcover book, "Memoirs of World War II" by Oric C. Neelly.

When Oric died this past June, my brother, Kent, and I sang at the funeral. One of the songs we chose was "America, the Beautiful," in honor of Oric's service to our nation. On this Veteran's Day, I'm sharing just a snippet of his story from the book, which I was privileged to receive from Brenda. 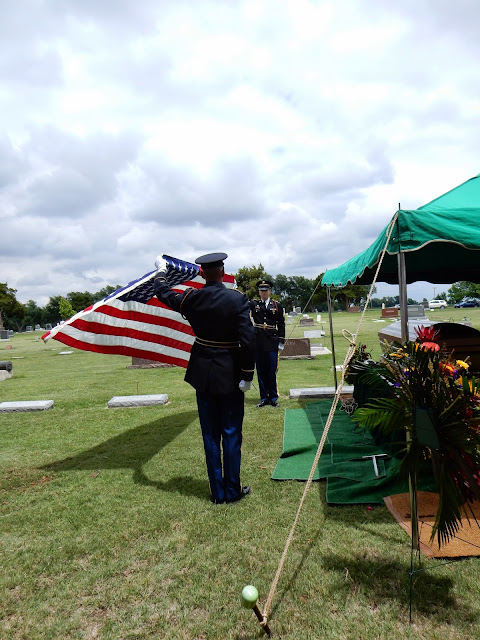 The words of Oric C. Neelly are below:

We boarded ship at Norfolk, Virginia, on or about the 20th of October, 1942. We were at sea for about 18 days. We were dodging submarines or maybe just waiting for D-Day. D-Day being the day the invasion was to start. ...

(I'll insert here: This is not the D-Day we think of. As best I can tell, this would have been part of Operation Torch, the British-American invasion of French North Africa during the North African Campaign of World War II, which started on November 8, 1942).

Back to Oric: There were, I suppose, around six or seven thousand people on board. We were packed in pretty good, bunks stacked on top of one another. ...

The invasion took place on the 8th of November, 1942. The ship pulled in closer to shore and started unloading tank lighters, tanks, half-tracks and all the other equipment. Of course, the battleships and everything else were firing into shore. We were out on deck watching. ... 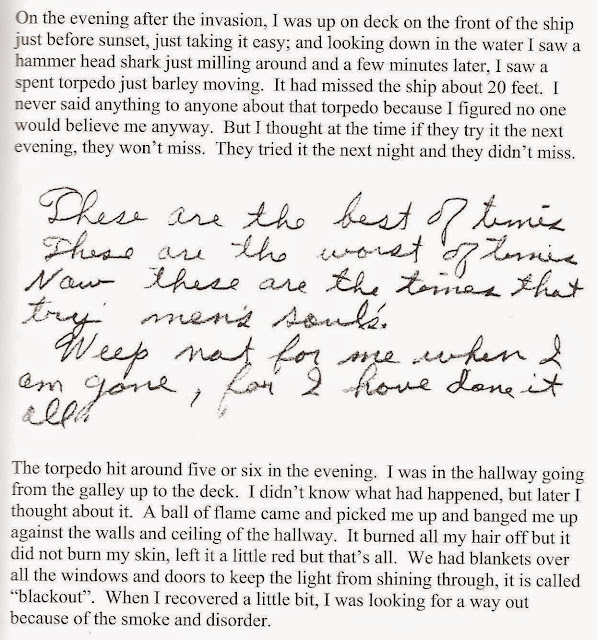 The ship was listing from side to side ... Being from dry Kansas, I didn't know how to swim. I thought this may be a problem. Anyway, I took off all my clothes and shoes, being just in my shorts and dog tags. I kept my billfold, which was a good thing because after I got into the water, it was a pretty good paddle. I went down a wood and rope ladder that was hanging down the side of the ship away from the fire, but the fire was on both sides of the ship. I got as far away from it as I could and pushed off into the water. My life jacket slipped up my back and stopped at the back of my head, but it kept me above water. Then I started dog-paddling away from the ship. ...

The waves in the ocean were high, not breaking over, but almost. ... I just paddled away from the ship. I never noticed the cold much, but I think it was. I was in the water for about 45 minutes, just getting away from the fire and the ship. There was a Frenchman in a small fishing boat that came along and picked me up and took me in to shore. That was at Fedala, eight miles north of Casablanca.

There were only a few on that little boat. I don't know what made that Frenchman pick me up. There were at least two or three thousand guys in the water at the time. ... The Frenchman took us to the dock and let us off. I regret to this day I didn't get that guy's name, but I didn't. When we got off the little boat, I didn't have any clothes on or shoes. My fair, eyebrows and mustache were all white, burned from the fire, so I must have looked pretty bad. ...

Now that I am ashore, I don't know where to go or what to do without any clothes or shoes. Someone told me to go to First-Aid and told me where it was. My sea legs were so bad I could hardly walk, but I took off. When I came to it, it was just a small house on the side of the road. I went in and there were guys laying everywhere, moaning and groaning really loud and blood everywhere. I looked in the next room. Two guys were throwing dead people out the window. ... I said to myself, "I am not hurt this bad, I am getting out of here." ...

After that, I wandered into a camp of GI's. I told them I was off that ship that was burning out at sea. It burned all night. They took me in and gave me some chow and a blanket. One of the guys was gone, so they gave me his cot to sleep on. I was fixed for the night and safe on shore, which was a good feeling. ...

Now this was just the start of the war. I was over there 2 1/2 years. I can't remember some of it too well, so that's why I'll just tell you the highlights now and again.

I want to insert some sayings and words of wisdom that I have picked up going through life, hoping you will find them interesting or amusing, whatever: 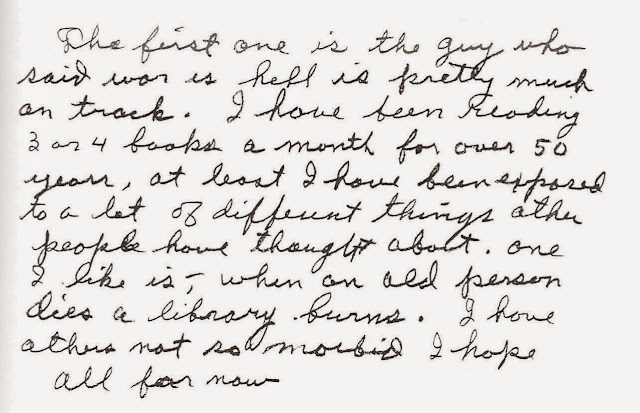 ***
The book recounts other memories of Oric's service in the Army. For me, it is more powerful than a history book because I knew the author.

An honor guard from Fort Riley played "Taps" at Oric's funeral in June. 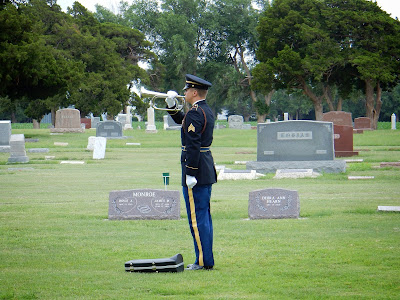 And, Oric's words, written in his own hand, seem particularly appropriate on this Veteran's Day. 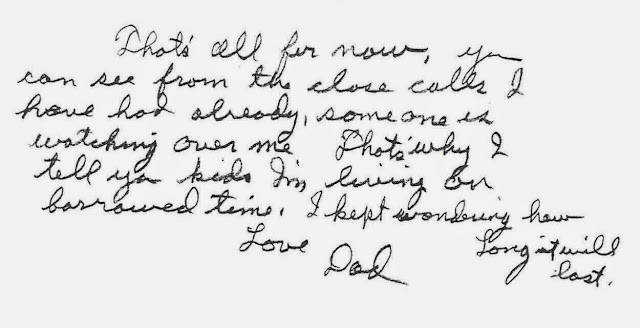 This just a small portion of the book, but on this Veteran's Day, I thank my Uncle Oric and all the other brave men and women who have served our country. 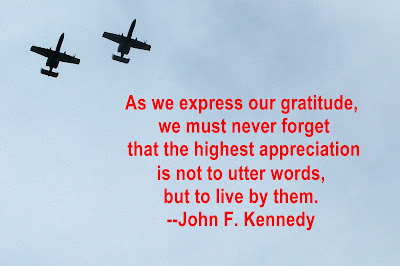 Thanks also to Brenda for making sure one veteran's story was told and preserved. It is quite a gift! (More thoughts from Oric's service are here: Who Has Seen the Wind?)