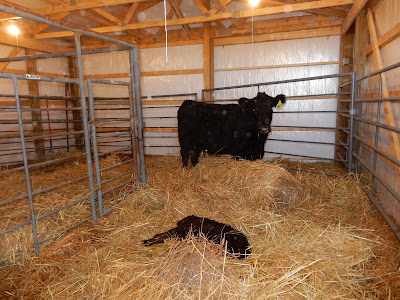 Everyone loves a happy ending.

We go to romantic comedies, knowing that the boy and girl eventually will find true love after a series of comical mishaps. We root for the hero during action movies. We hold our breath as we turn pages of an engrossing book, anticipating an ending that ties up all the loose ends.

But sometimes, no matter our best efforts, the ending isn't one you'd choose. People die too young. A potential job falls through. An accident happens and changes life forever.

And, sometimes, a baby calf dies.

Such was the case with the seventh calf of our Class of 2017.  Heifer No. 581 gave birth in a mud puddle. The mama didn't take advantage of a generous amount of straw spread out in the corrals. 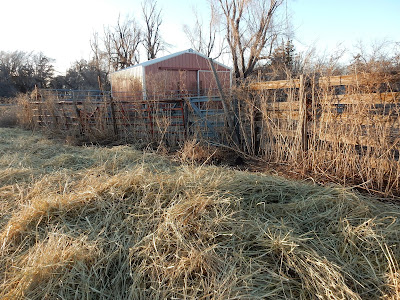 The calf couldn't have been there all that long, probably less than an hour. But, by the time, Randy was back out in the lots, he found a shivering black calf. He and Ricky hauled it into the calving shed and tried to warm it up. Then, they left it alone with the mama for awhile, hoping she'd get it up and nursing. 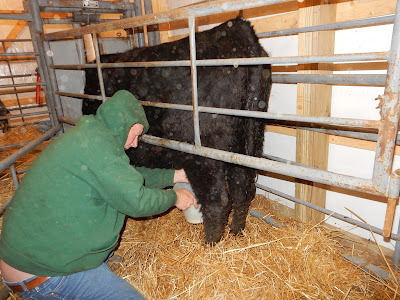 But, after checking it again, Randy decided to milk out the mama. Baby calves can't nurse if they don't stand up, and this little calf wasn't strong enough. 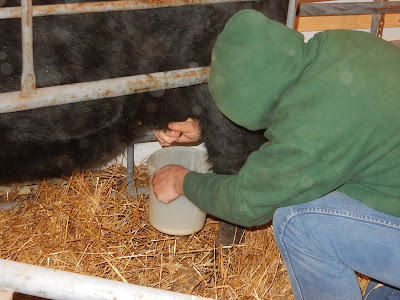 Just like with humans, a mama's first milk is full of important colostrum for its offspring. We got the heifer in the head gate and Randy milked her. 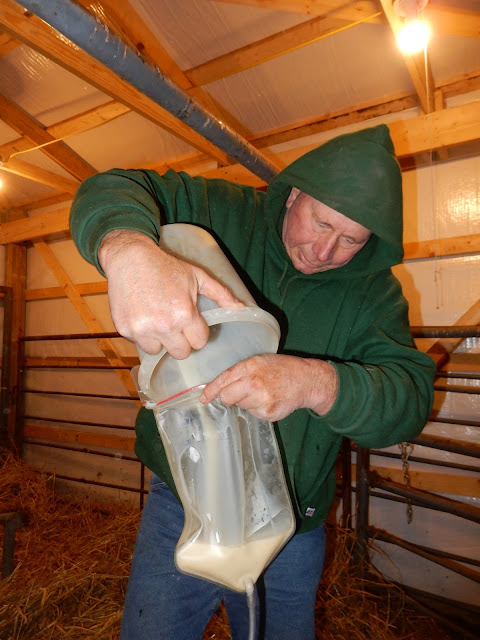 We use an esophageal feeder to feed the calf. 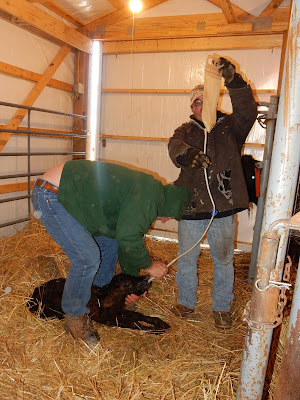 It uses a tube and gravity to get the milk into the calf's stomach. 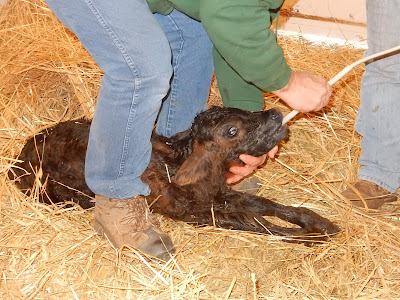 Some gentle rubs from a farmer were part of the after-feeding ritual. 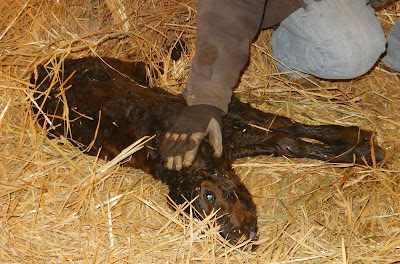 But, a few hours later, the calf died. No one ever likes losing calves. We do our very best to be good stewards of the animals in our care. But, despite our best efforts, Old Man Winter can be a hard opponent to battle. Death is a fact of life. It's hard on the emotions and the pocketbook. (New calves would sell for about $200 in the sale barn this year.) And it's not a fun thing to share on a blog about a farm. But it is truth.

We celebrate when Cinderella's foot slips effortlessly into the glass slipper and she gets her prince. We cheer loudly when the underdog triumphs over the bigger, stronger opponent. And we mourn when things don't have a fairytale ending.
But the journey continues. We have a total of 113 heifers and cows to calve out. Here's hoping for more happy endings.
Posted by Kim at 7:52 AM