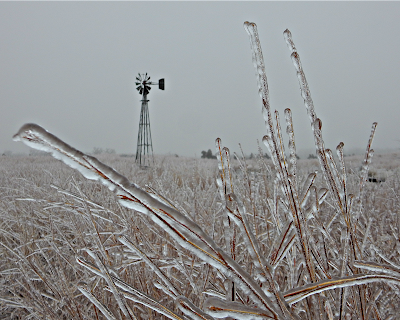 When I was in grade school, we took a vacation to Colorado. While there, our parents treated us to an evening at the Ice Capades.
For weeks afterwards, we girls twirled and swirled throughout our days. The living room became an ice rink. The hallway was transformed into a small venue, and we used the mirror as our imaginary camera, smiling broadly for our imagined adoring crowd. Socks on the marble entryway was the closest thing we had to fulfilling our skating fantasies, its slick surface a conveyance for our imaginary Ice Capades sequined costumes and glittery headgear. We thought we were so graceful as we dipped and swayed in our fictional shows. 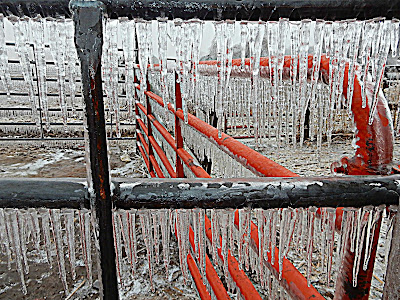 We had our own version of the Ice Capades this week in Kansas. But now that I am old and wise, I know that I don't have a graceful bone in my body. My goal for the past couple of days was to remain upright. There was no twirling, unless it was a little dance for balance when my feet slipped on the icy ground. 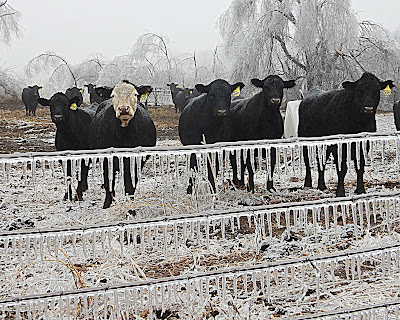 The guys didn't have the option of whether they were going out in the icy mess. The cows needed to eat, so there was no "snow day" in the work schedule - and no "ice day" either. I decided to go along for the ride. 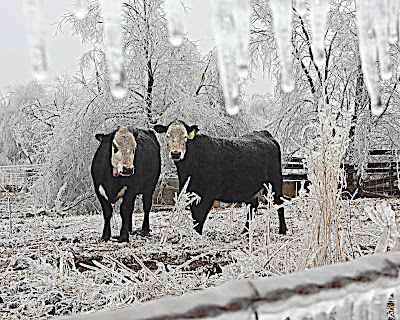 These two soon-to-be mamas wondered what I was doing as I crouched down for an icy camera shot through the fence. 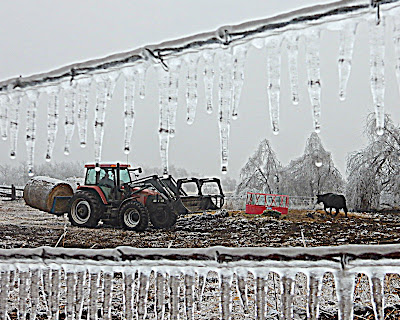 They were interested in me until the tractor came. 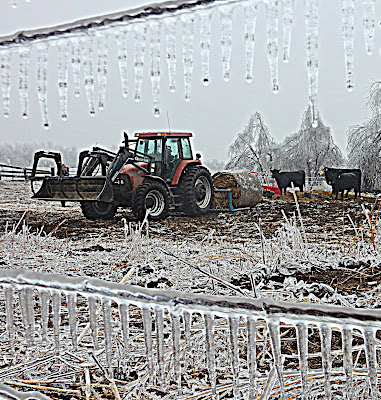 I used the icy barbed wire fence as a photo frame as the guys fed bales of hay. 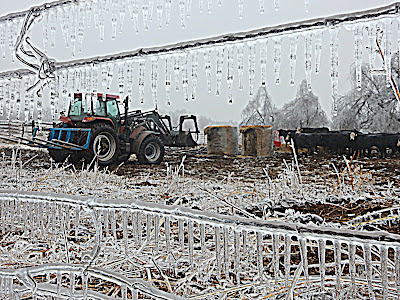 Then we went to the pasture, where Randy undid the net wrap from the hale bales ... 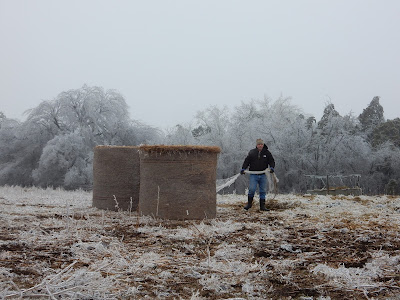 ... while the cows patiently waited for breakfast ... 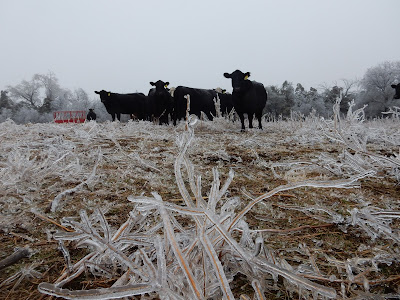 ... before Ricky deposited the hay into the bale feeders. 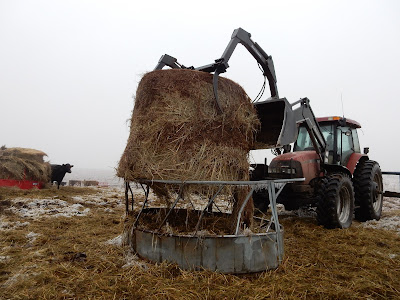 I  was surprised when a few icicles survived the tractor dumping the hay into the round bale feeder. 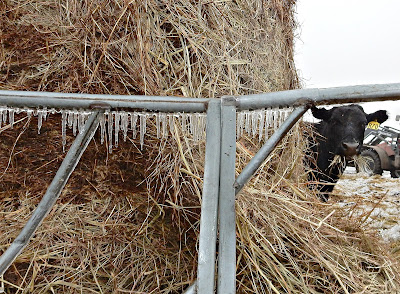 The cows didn't seem to care that they were having "iced hay" for breakfast. 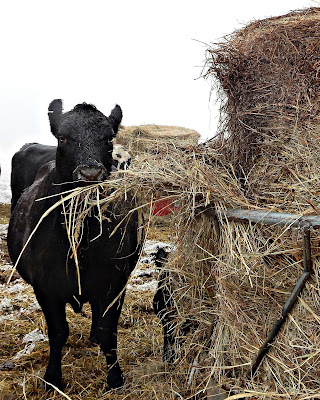 We checked on the bulls in another pasture to make sure ice-laden trees hadn't fallen on the fence, giving them an escape route. All was well. 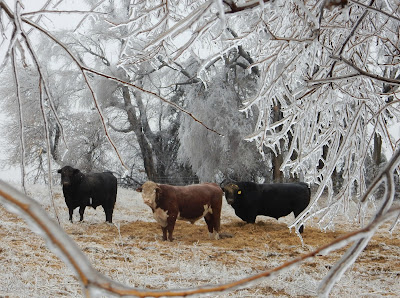 The solar panel that usually fills the water tank looked more like an ice sculpture than a functional piece of equipment, so we also checked the water level in the tank. 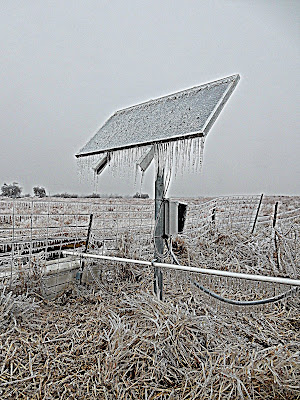 As the guys fed at another location, I wandered around and clicked the camera shutter. 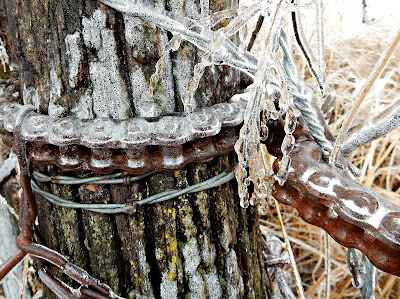 I liked the contrast of the teardrop ice on the weeds and the rustic wooden fence post and rusty chain. 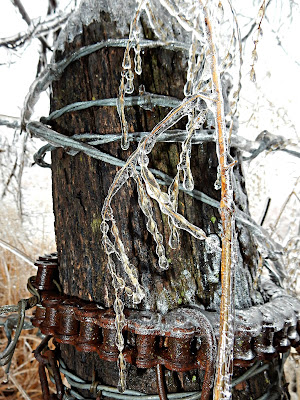 Even though the ice made the roads and corrals sloppy and slick, the moisture was cause for celebration. Our part of the state was on the drought map. By the time the rain, freezing rain and ice was done, we had accumulated 2.60" of rain in the gauge. 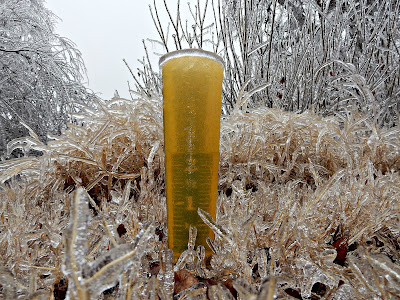 The moisture will be a boon to the winter wheat crop ... 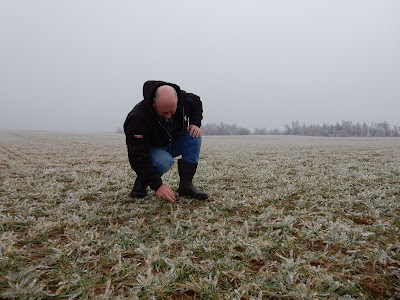 ... even though it looked like a slushy machine had exploded all over the fields. 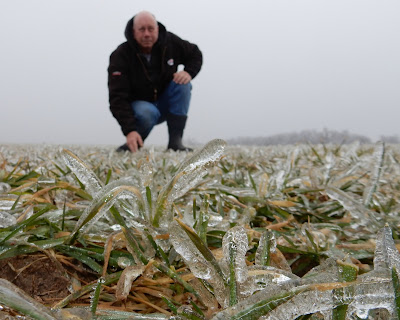 Along with the beauty, there was plenty of destruction. 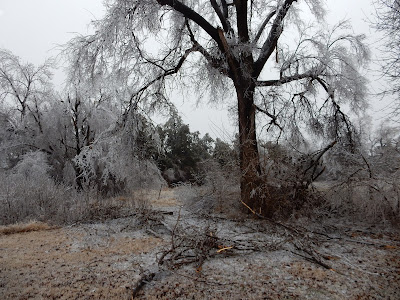 Our old trees look like they've gone through another war. For us, it wasn't as bad as the December 2007 ice storm, when we were without electricity for 12 days. We were without power only for a few hours. I know there are many others (including my parents and brother) who are still waiting for the power to be restored, so we are very thankful that we didn't even have to hook up the generator. 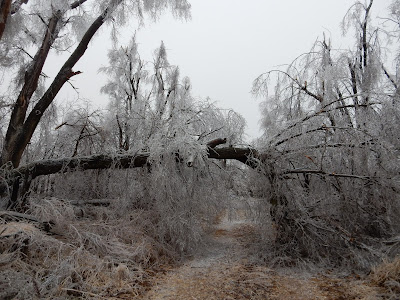 But there is still a lot of cleanup to do at home and to clear the way to get to the cattle at several locations. 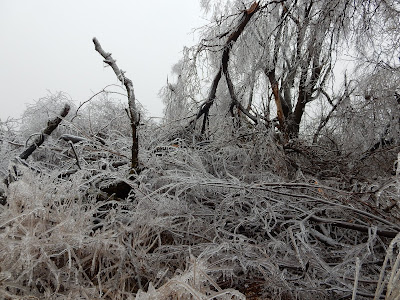 As we listened to limbs cracking and ice hitting the roof, Randy was afraid that the branch holding our swing would fall. 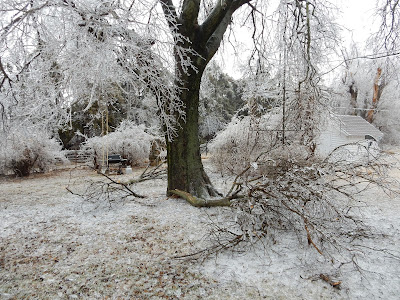 While several other limbs from that tree fell to the ground, the swing is still there. It will be ready for Kinley and Brooke the next time they're at the farm! 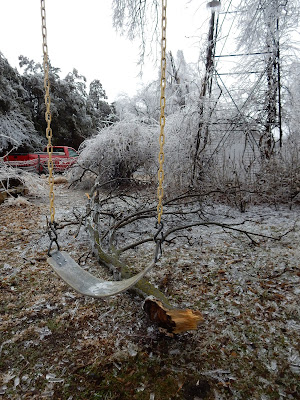 More beauty shots from the ice storm in the next blog (I took 179 photos yesterday morning and some the day before, too. I promise I'm not showing all of them.)
Posted by Kim at 9:07 AM