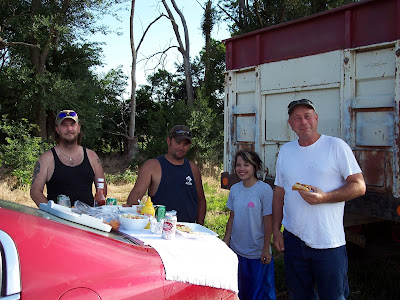 Harvest Crew 2010: Eric, Jake, Monica and Randy
Who needs a pizza delivery guy when you have me? Well, come to think of it, a delivery person bringing hot, fresh Elroy's Pizza from town might be a nice change of pace.

But, alas, Elroy's doesn't deliver, so it's up to me to get meals to the field. So far, the harvest crew has come to me for the noon meal. I deliver the evening meal to the field. 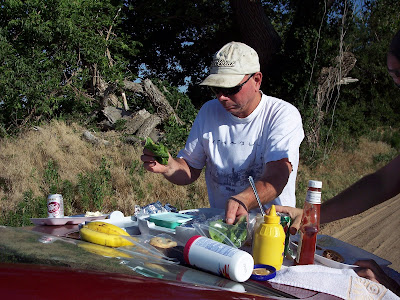 When we move "up north" - as we call one location - I'll probably deliver both the noon and evening meals.

It's definitely less complicated than it used to be when the kids were little. While I was dirtying every pot and pan in the kitchen, they also needed attention. But it was a great adventure for my two "helpers." 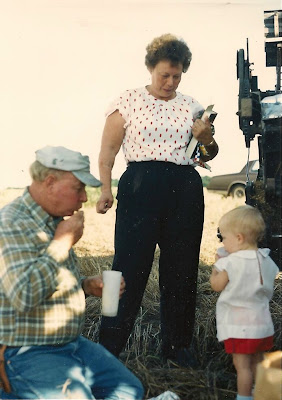 I think Jill would have been 1 1/2 at the harvest pictured here.

Back then, I would bring an old blanket, which we'd spread out on the freshly cut wheat stubble. Jill would usually find a lap to sit on, though. These days, I don't take a blanket to spread out. I usually just use some old towels as a makeshift tablecloth on the car trunk. 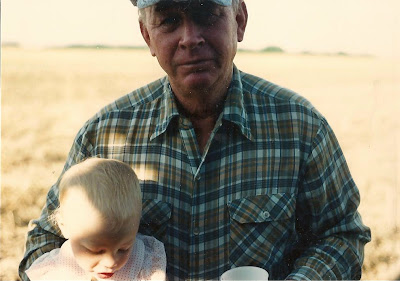 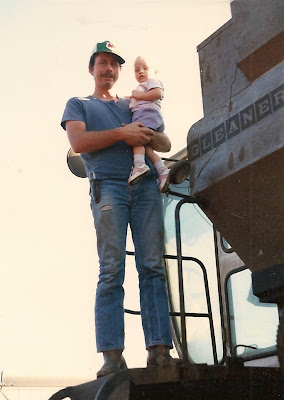 Rides with Daddy were often included as the after-dinner entertainment.

Brent was a just a little over a month old at his first harvest. Thankfully, he slept through a lot of meals that year, though I did hire a teenager to help me with meal preparation and childcare. 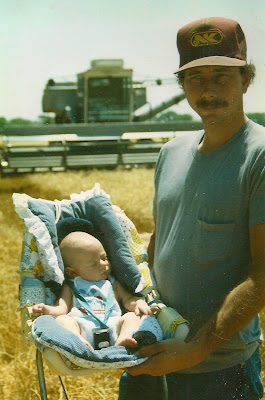 Yesterday, I found a couple of old clippings from my days writing the "At Home with Kim" column for The Hutchinson News.

In June 1990, when Jill would have been 4 and Brent had just turned 2, I wrote: "In fiction, dinner for eight conjures up images of a cozy little dinner party, the men in black tie and the women in slinky evening gowns. In my world, the only black the men are wearing is an ample smear of oil from cantankerous combines and trucks. And the only thing clinging to the women is scratchy cheat, sweaty shirts and itchy wheat dust.

"It's harvest time, and dinner for eight is a time to throw a little fuel into the body's engine between swaths cut from golden carpets of grain or slow trips to Zenith in trucks "air-conditioned" the old-fashioned way.

"For me, it's a race against time to get a well-balanced, tasty meal on the table before noon, all the while tap-dancing around Brent's own Gleaner cutting imaginary wheat on my kitchen floor."

I wrote: "Jill and Brent think picnics are loads of fun, especially if they get rides on the combine with Daddy or Grandpa Melvin for dessert. On rides to the elevator with Grandma Marie, they have the important job of getting the ticket.

"They get pop for supper every night, which never happens in 'real life.' And they get to have 'guest-es', as Brent calls them, for dinner every single day."

It's always a challenge to remember all the utensils needed when packing up a meal for the field. On one harvest meal run when the kids were little, I forgot the Dutch apple pie that was the intended dessert. It's not that the harvest crew was going to go hungry. But it was still frustrating for this Type A "caterer."

Even though it's not food, one accessory is almost as mandatory: Wet towels help the harvesters wipe away the wheat dust and grime before the meal.

I had already planned my noon meal for today by the time I found the 1992 column. Ironically, the recipe included in the 18-year-old newspaper clipping is what's on the menu today. BBQ Meatballs is obviously a tried-and-true harvest main dish. But it's one I use all year.

These freeze well. In fact, the ones we are having today are ones I pulled from the freezer. I'll pair them with a potato casserole, green salad and fresh banana muffins. Enjoy!

Spray baking dish with cooking spray. Mix all together ingredients and form meatballs. (I usually use an ice cream scoop to make uniform balls.) Place in single layer in baking dish and cover with sauce below or use your favorite barbecue sauce. Bake, uncovered, at 350 degrees for 1 hour.

I usually use Curly's Barbecue Sauce these days. But if you want to make your own, here's the recipe:

Mix all together and pour over meatballs.

***
This other recipe is one my mother-in-law, Marie, used when she had to take the noon meal to the field. She had a pan that fit into a Styrofoam caddy. I seriously considered bringing that container home when we cleaned out her kitchen. But after years of using it for harvest transport, it was grungy, at best. I have my own thermal containers and coolers that are looking a little worse for wear these days. But they still do the job.

When the kids were little, I did the meals, and Marie drove the truck. But I usually used this recipe for one meal since it combined the meat and veggies into one dish. She called it "Baked Steak Meal in One." I renamed it "Harvest Helper."

Cut steaks into strips 1/8-inch wide (meat cuts easier if partially frozen). Dredge meat in flour and brown in hot shortening. Combine vegetables, browned meat and lemon juice. Put in 2 1/2-quart casserole. Cover with beef broth. Cover casserole and bake at 275 degrees for 4 hours. Or bake at 350 degrees for 1 1/2 hours, stirring once or twice during baking.
Posted by Kim at 7:45 AM