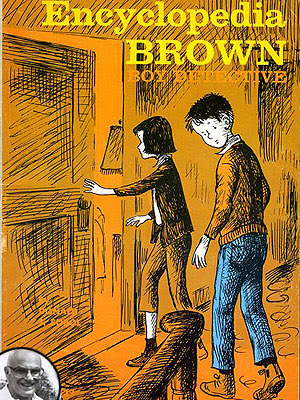 Encyclopedia and I go way back. I often drifted toward the "S"s in the children's department of the Pratt Public Library, looking to see if there was a new installment of Encyclopedia Brown by Donald J. Sobol to add to my considerable stack of books.

Amateur sleuth Encyclopedia Brown and his friends solved mysteries. They were written in short-story form, giving the reader lots of clues to try to deduce the situation, right along with Encyclopedia and his friends. And, if you were clever enough, you just might figure out the ending before having to turn to the back of the book to find the solution.

Donald J. Sobol died last week at the age of 87.  Starting out his professional career writing for the New York Sun, Sobol eventually worked his way up to reporter, and then worked at the New York Daily News for two years.

Though Sobol began writing mysteries in the 1950s, the first Encyclopedia Brown: Boy Detective book wasn’t published until 1963, after it was repeatedly turned down by publishers. Once published, however, the book became so popular Sobol soon followed with more stories about 10-year-old Leroy "Encyclopedia" Brown and his sidekick Sally Kimball. The stories were translated into 12 different languages.

"Thanks to Donald, generations of children have learned to read and solve mysteries alongside Encyclopedia Brown, one of the most iconic characters in children's literature."

I'm still a fan of mystery and thriller books. And I wonder how much of the love of that genre is related to my early days, curled up with yet another Encyclopedia Brown mystery.
I looked up Encyclopedia Brown on Amazon and found more than 1,000 entries. Some of the latest were $5.99 books for the Kindle. Encyclopedia looks a little different than he did back in the 1960s, doesn't he? 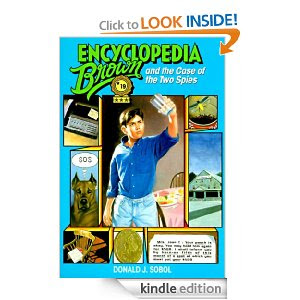 But he still seems to be popular, as 2013 will mark the 50th anniversary of the “Encyclopedia Brown” series, and a new book, Encyclopedia Brown and the Case of the Soccer Scheme, will be published in October.

Sobol wrote more than 80 books, including 28 in the Encyclopedia Brown series, writing daily until a month before he died. And that is inspiring, too.