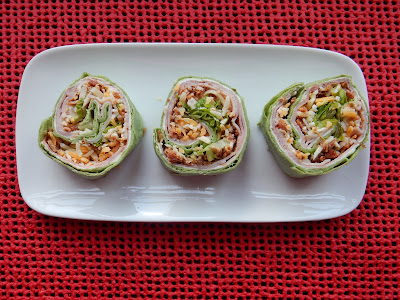 Flexibility is a good thing. It comes in handy on a farm, when plans change because of weather ... or machinery breakdowns ... or personnel.

It's also valuable in a recipe. I first made these Turkey Club Pinwheels for the national Master Farm Homemaker Convention in Hutchinson. We Kansas ladies provided a light supper and snacks in the hospitality room the first night. I was supposed to bring sandwiches, but I thought the occasion called for some pizzazz along with good taste. I'm sure people would have eaten plain old ham sandwiches, but we were trying to make a good impression, right? 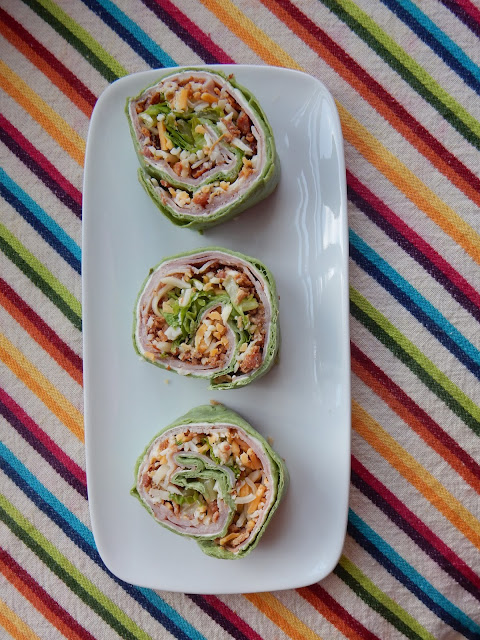 Turkey Club Pinwheels to the rescue. They didn't last long in the hospitality room. Then, during wheat planting, they made a repeat appearance in the guys' thermal lunch bags. This time, I served them in the form of a wrap, instead of cutting them into lady-like slices.

Either way, they were a hit. They could also be a tasty addition to a football tailgate or a Royals' baseball viewing party. Need a change up in your sandwich menu? Send in these Turkey Club Pinwheels. 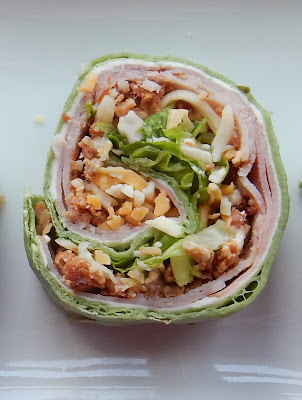 Mix together cream cheese, yogurt and ranch dressing powder. Spread 1/4 of the mixture over each of the four tortillas. Place thinly-slivered deli ham over the cream cheese mixture, then top that with a layer of deli turkey. Sprinkle with cheese and bacon. Top with shredded romaine lettuce.

Roll up, folding sides in as you go. Wrap in plastic wrap and refrigerate for 1 hour. Cut each tortilla into 6 slices. If desired, add a toothpick topped with a grape tomato. Makes 24 pinwheels. Or you may also serve as wraps. (Makes 4.)


***
Today, I am linked to the Weekend Potluck. Check out all the other yummy recipes there. It is hosted by: