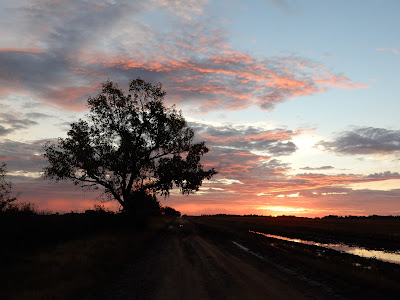 A glimpse of the morning sky had me grabbing my camera and taking off down the road for photos. The first stop was my sunrise tree, where the tapestry of sky almost made me ignore how much water is still in the fields. Almost. But there's still some water in the road, and the neighbor's mudhole reflected  a sliver of the morning sky. 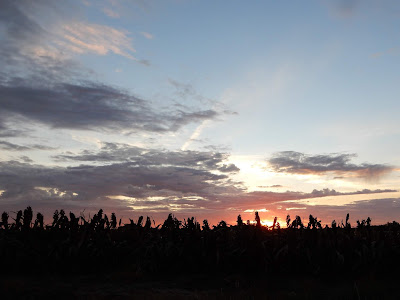 As the sun creased the horizon, I hurried down the road to take some photos of the milo field we still need to cut. Those photos weren't all that memorable. I didn't like them with the flash any better. 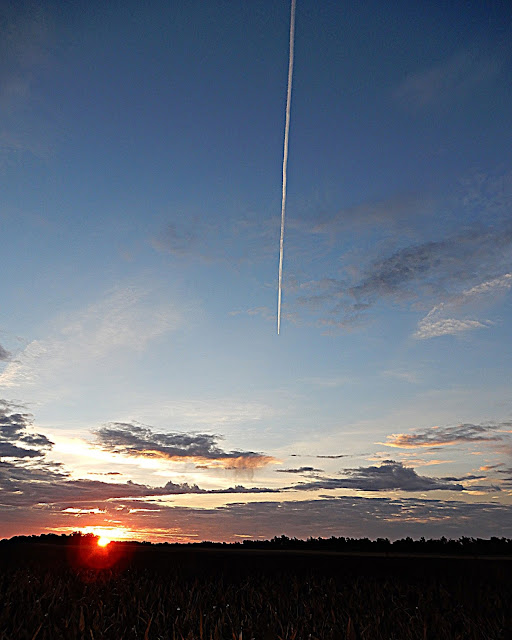 But then I noticed a single jet stream creasing the sky like a bullet. Though you can't tell from the photo, the rising sun glinted off the underbelly of the jet plane. And I thought about the Plains' reputation as a flyover country. I wondered if those passengers were looking at the patchwork of water-logged fields below, watching the sunrise from their perch in the heavens, or whether they had their heads buried in a book or an in-flight movie or were still snoozing.

But then I thought about all they were missing. I admit it. The last few weeks have been challenging. Thirteen inches of rain brought farming to a halt for three weeks during the busy time of fall harvest and wheat planting. Like the deep ruts that were left behind by flood waters coursing over dirt roads and through culverts and making rivets in fields, the rain gouged our hearts and minds with worry about getting everything done.

Then, last week, after only two days of trying to plant wheat again, we got another inch of rain, bringing our grand total to 14 inches. Randy got back onto the field again Monday to try and beat the October 31 deadline for planting wheat.

On a crisp fall morning, I tried to recognize how much I should be thankful for. 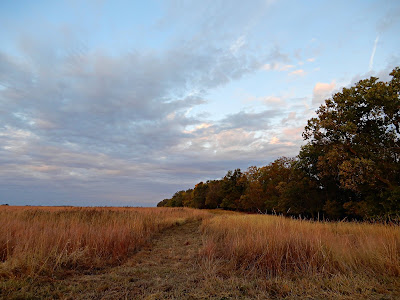 The other side of the sunrise brought morning's first light to a neighbor's mowed hunting trail. 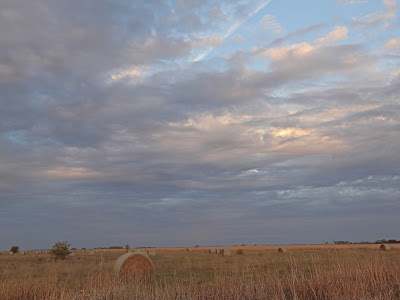 It kissed the tops of hay bales in a CRP field just north of our house. 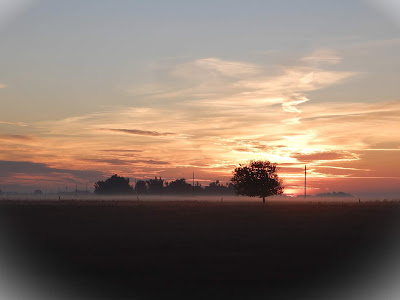 A week ago, I left just as the sun was rising to go to a meeting in Hutchinson. There was a thin layer of fog hanging in the air on this windless start to the day. I couldn't resist stopping to click a few photos. And, yes, I still made it on time to the meeting. 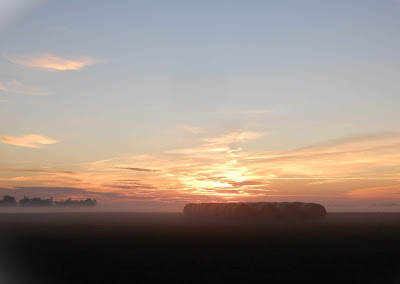 I have to admit that I've been in a fog of doubt the past few weeks. And, I'd be lying if I said those worries are gone. God doesn't like worrying, but I don't think He's a big fan of lying either.

But just like morning light penetrates fog, I know I have much to be thankful for. I look at the photos of destruction from Hurricane Michael and Hurricane Wilma. I still have a house. I still have power. I am still able to buy fuel or food without waiting in lines caused by a weather-induced shortage. I read Facebook updates from the wife of a young farmer who was critically injured while he was planting wheat last week, and I am thankful that we are just experiencing the aches of pains of our age, rather than mending from a terrible accident. 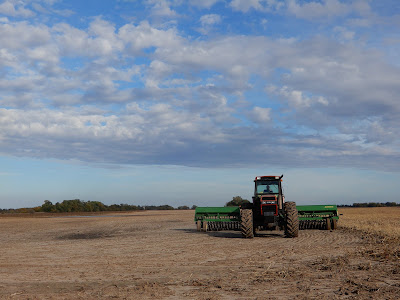 Am I happy that we'll be spending more money on certified seed wheat to replant seed wheat? No. But I can be happy that we're again able to be in the field planting ... even if Randy has to drive around some mudholes to get it done. 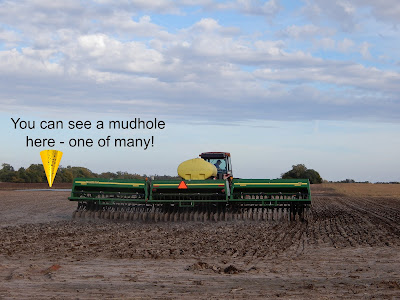 And there is certainly enough beauty to appreciate. 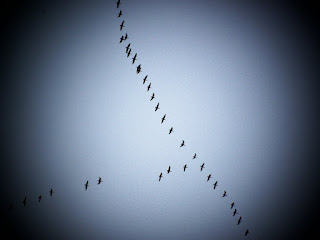 During my morning walk, the geese call to each other and look like black pepper flakes floating on a soup bowl of bright blue. 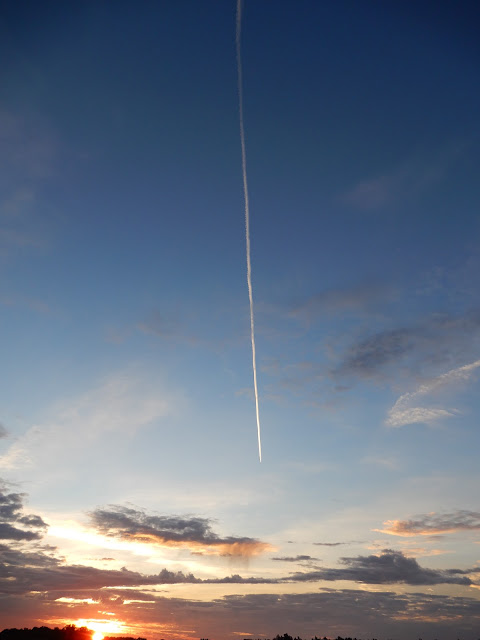 That jet stream looks like a row of silver embroidery thread piercing through blue fabric. 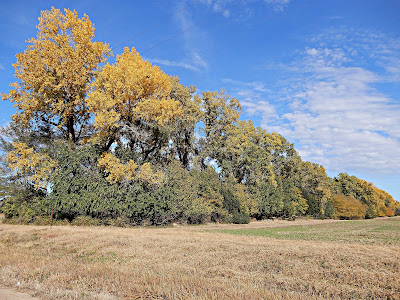 And the shelterbelt to the north (the one that hides a secret fairyland ... and skunks) is dressed in its fall best.
All I have to do is open my eyes ... and my heart .. to hope. Maybe the worry can fall away like those autumn leaves. Well, I can pray that happens.
NOTE: We may not be able to plant 415 acres to wheat that were part of Randy's wheat plan for 2019. More on that in an upcoming blog post. We'll see how that all goes ...  since there are raindrops on the weatherman's map yet again. 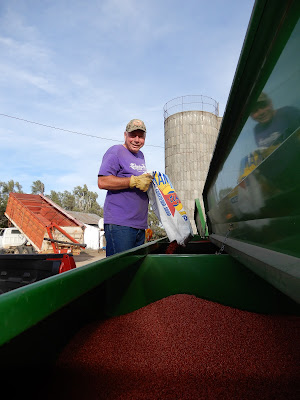 Today is Randy's birthday. A blueberry pie is in his future!
Posted by Kim at 7:51 AM