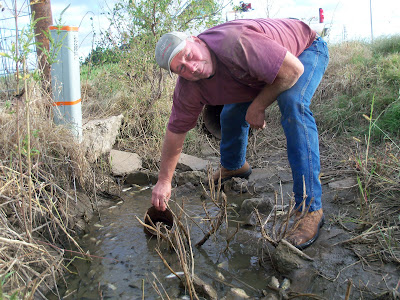 When I grow up, I want to be a little boy.
Joseph Heller

They may be balding. Their hair may be more "salt" than "pepper" these days. But somewhere beneath the hurting hips and slower step, there's a little boy just aching to get out.

Last week, Randy had an equipment breakdown, and I was several miles away at the grocery store. After he'd made his way to the road, he settled in to wait for me.

When I picked him up, he could hardly wait to get the door open to let me know he'd found an unexpected treasure. There were goldfish swimming in the ditch.

He assumes they made their way from the Rattlesnake Creek, just a half mile away or so. He thinks rains swept them away from the creek and into the ditch, where they congregated at the end of a driveway.

Earlier in the week at breakfast in town, he'd heard that the children who live in the nearby farmhouse had a budding business. The little entrepreneurs were selling the runaway fish to local fishermen. He's not sure what price they were fetching, but even with their salesmanship skills, there were still several fish left in the ditch.

A bigger goldfish with its flash of orange caught his eye.

But I was in the car and I was fresh out of any equipment deemed suitable for fishing.

Later in the day, however, we had to make a return trip to retrieve a pick up. And Randy went back prepared with an old coffee can and a 5-gallon bucket of fresh water. He was goin' fishing. 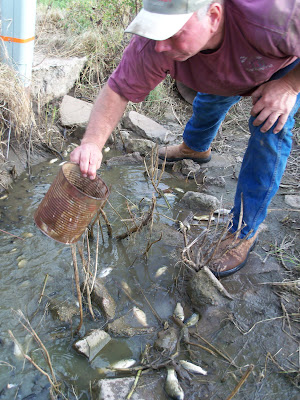 This expedition was a bit different than our adventure along the Ninnescah River earlier this summer. But he was no less excited.

With no rain for a couple of weeks, several of the fish had already succumbed to the lack of water. And most were just little fingerlings.

But then there were these beauties: 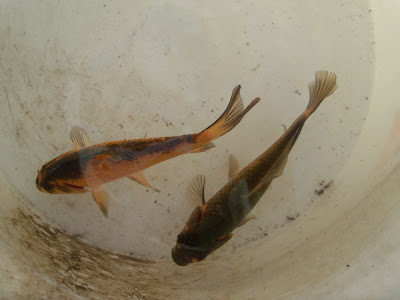 Randy could hardly wait to get them back to the farmstead to show Trevor, Jake's little boy who's a first grader. This real little boy was suitably excited about the great surprise from the "big little boy." 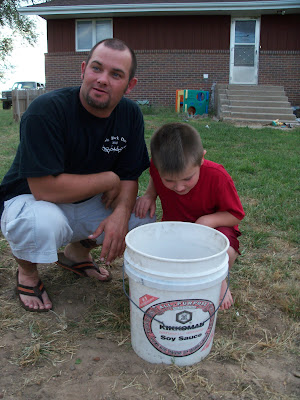 It reminded me of the goldfish that came to live at our house during a long-ago Kansas State Fair. Jill and her friend, Holly, had done their pretzel making demonstration at the 4-H building. The little brothers - Brent and Bradley - were along for the day.

To celebrate the girls' purple ribbon, our families went to the Midway, where the kids competed in a game of chance. And the prize? Goldfish.

Both families carefully carted home the wonderful treasures in plastic bags. I believe there was a detour and an investment in a small plastic aquarium and fish food before we set off for home. I don't remember how much money was spent on the game before all the kids were rewarded with their prizes. It probably would have been cheaper to buy fish at WalMart to begin with. But that wouldn't have been nearly as much fun now, would it?

The fish lived longer than the kids' interest in the fish lasted. I think Bradley's fish won the prize for ultimate longevity.

Even though our kids are grown and gone, I still am lucky enough to live with someone who can see the world with childlike wonder.

And that's a good thing.

If I needed any further confirmation of his lighthearted look at the world, the K-State game left no doubt. A family behind us had face paint, and the mom overheard Randy remarking to me about the kids' war paint.

She fixed him up with his own rather unique placement of Purple Pride.

In every real man, a child is hidden who wants to play.
Friedrich Nietzsche
And here is Exhibit A. 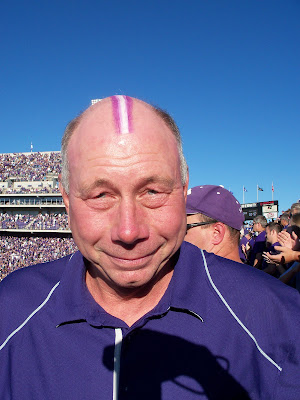