Outstanding in His Field

Once upon a time, I remember giving my dad a birthday card that said: To a Dad who's outstanding in his field.

You opened it up and there was a farmer standing in his field.

I don't know if any little city girl thought it was the perfect card for her dad, but for my farmer Dad? It was the hands-down choice.

It's probably not nearly as clever as I thought it was back in grade school, but I thought of it every time we went to the field to take a photo of the sudan crop this summer.

My farmer was out standing in his field (and, in my personal opinion, he's pretty outstanding in other ways, too.)

It's been a fun photographic experiment. 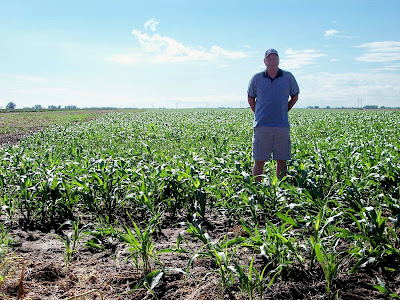 This photo was taken August 15. We had gotten 1.10 inches of rain that morning. 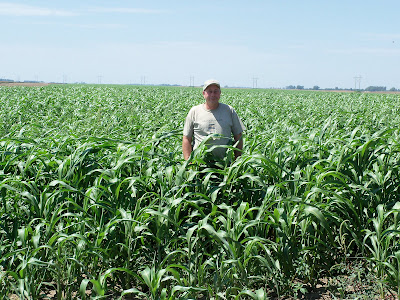 This photo was taken August 23. Look at the growth in a week and a day! 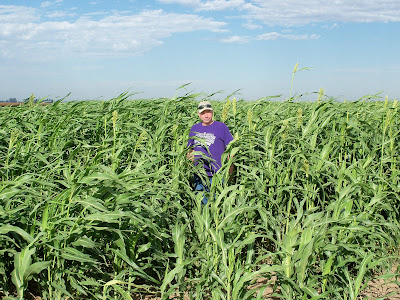 Then on September 7, two weeks and a day later, we took this just before Randy started swathing the 2010 sudan crop. At that point, some of it was taller than him.

Randy planted 85 acres to sudan, double cropping after the wheat harvest. The photographic experiment illustrates why he plants sudan: It's a fast-growing crop, which we use to feed during the winter to our cattle.

It's a relatively inexpensive crop to plant, a cost of about $21 an acre ($7 an acre for seed, $5 an acre for fertilizer and $9 an acre for herbicide). Randy estimates it costs an additional $15 per acre for fuel and machinery wear. That doesn't count labor. 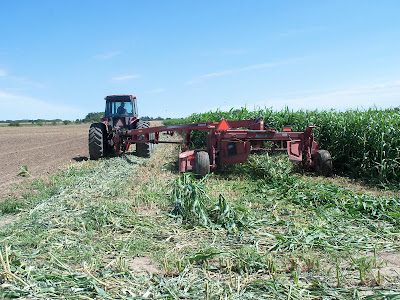 We use the same pull-type swather to cut sudan that we use for harvesting our alfalfa hay, though it has to be set differently for this taller, thicker crop. 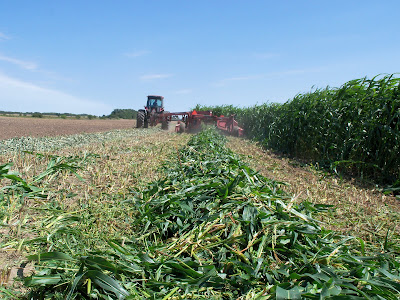 It chops it off near the ground and leaves it in windrows. Sudan doesn't have grain in the head, one of the differences from the silage that we harvested September 8. So it doesn't have as much protein or carbohydrate as the silage. Randy prefers to use it for mature cows rather than feeder cattle. Cows don't have as high a nutrient requirement as feeder cattle.

So why plant and harvest yet another, different feed for our cattle? For one, we don't have room in the silo to store enough silage to feed our cattle all winter.

During a four-month hay feeding season, a 1,200-pound cow will consume approximately 30 pounds of hay each day. This means that each cow will require between three and four round bales weighing at least 1,100 pounds. 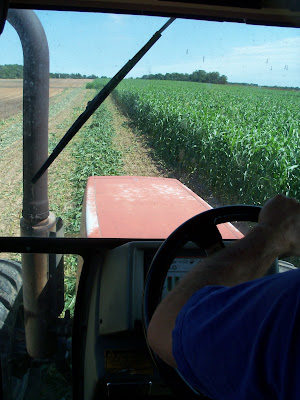 Sudan doesn't get quite as tall as the silage: You can see how its height compares to the height of the tractor cab. 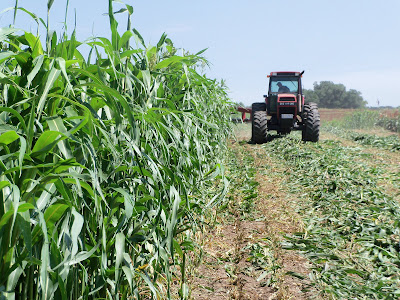 Sudan isn't quite as sweet-tasting as silage, which has a higher sugar content. And how does Randy know that, you might ask? Yes, he has tasted it. I vaguely remember tasting silage as a kid, too, when my Dad would cut into the stalk and we'd suck on it.

Randy plants a brown midrib variety of sudan, which is more palatable to cattle because it's a little sweeter. 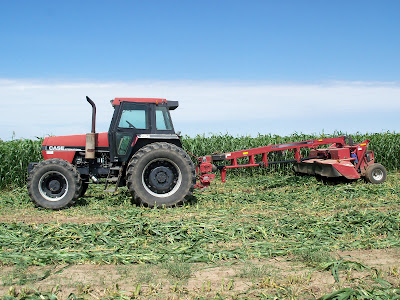 Yes, there are equipment breakdowns in swathing, too. Here he had to "unplug" the sudan from the swather. 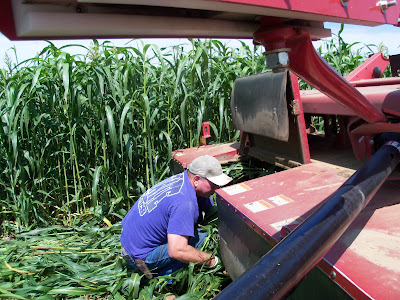 So what are the risks to planting sudan (in addition to breakdowns on the swather, of course!)? Sudan doesn't grow well if you don't get rain. We have been blessed this summer with timely rains. If sudan is raised in drought conditions, however, it may be too high in nitrates. If that occurs, we would have had to wait until after a freeze before it could be swathed or grazed to avoid nitrate poisoning in cattle.

Because it's so thick, it takes quite a bit of time to "cure" or to be dry enough to bale. That creates another potential risk. If there's a heavy rain on swathed sudan before it's baled, it can begin to rot, lessening the quality of the sudan. 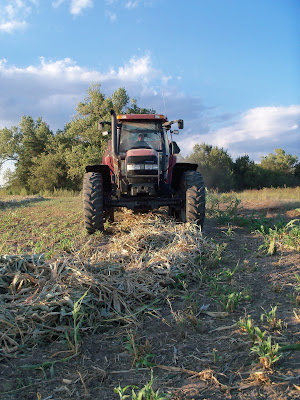 Randy swathed the sudan on September 7. It was finally dry enough to bale on September 17 and 18. Miraculously, we didn't have any rain on the sudan while it was drying, unlike all the alfalfa hay we had down this summer. I think we got rain on almost all of it. Again, we use the same baler to bale the sudan as we used to bale the alfalfa. In fact, during the same time he was baling sudan, he baled the summer's 4th cutting of alfalfa. 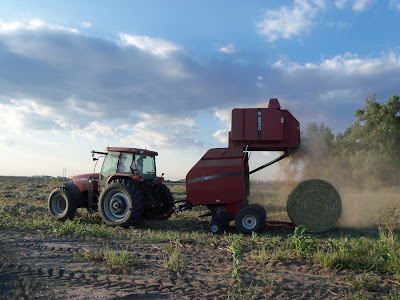 Randy uses an electronic tester on a completed bale to make sure it's dry enough. 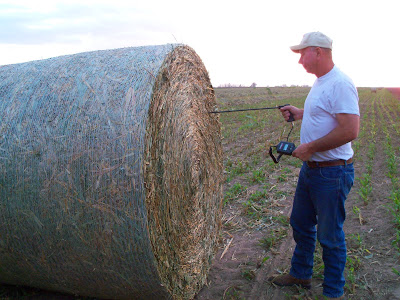 The probe gets into the center of the bale and determines the moisture. 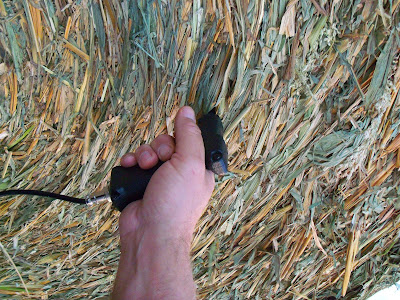 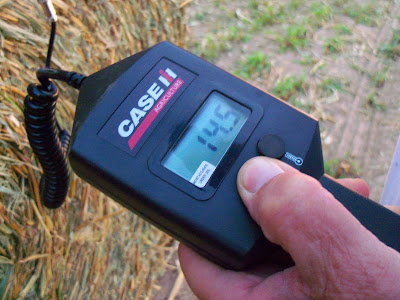 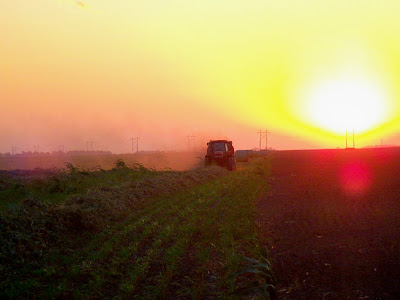 Randy baled as sundown approached. Sometimes as the dew comes on at sundown, it becomes too wet to continue to bale. 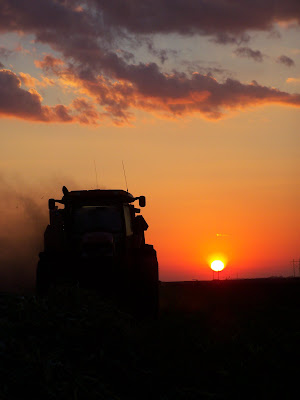 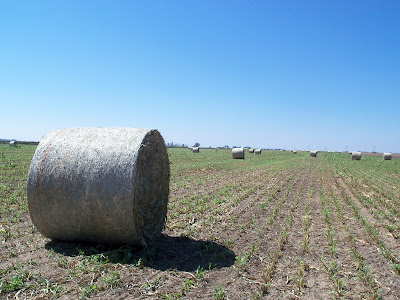 Randy uses an additional layer of net wrap on the outside of the sudan bales to protect it from the elements and to keep the bale together. Sometimes the sudan gets held over for another year before it's fed to cattle. It is harder to find a market to sell sudan, as compared to alfalfa.

Besides swathing and baling our own crop, Randy also did a little custom harvesting for a couple of different neighbors. He charges $15 an acre for swathing and $10 a bale to bale and netwrap each bale. 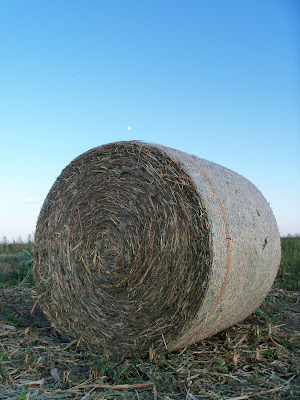 You can see the moon in the background, just over the bale. Harvest moon, I guess!

The sudan may grow back some. We'll be able to fence off the field and let cattle graze as another fall and winter "dining" option.

So there you have it: Sudan harvest on The County Line!
Posted by Kim at 7:00 AM