The Dance of Life

(This was taken with the panorama mode on my new camera. I still have some work to do in figuring out how to use this feature. But, for the most part, it captured a beautiful rainbow in this photo taken September 8, 2010.)

On this day, God wants you to know
that this world was made for you.
Enjoy it, explore it, experience it.
Don't hold back. It is God's gift to you.
Don't be a wallflower in the dance of life.
I have a couple of Facebook friends - a mother and son (thanks Jane & Mike) - who occasionally post Messages from God as their status.

And even though these messages are winding their way through cyberspace to hundreds of people, it often feels they are directly aimed at me.

Yesterday I was busy, busy, busy. I spent much of the day sequestered in the basement working on the Stafford Main Street newsletter, my KFRM Central Kansas reports, my blog and other assorted projects. I made several trips to the field to help move vehicles and take meals.

I crossed several things off the to-do list, but the list is never ending. It seems to multiple as quickly as dandelions after a brisk Kansas wind.

I walked outside, but it was more about getting it done than enjoying the view. I was trudging along, kicking up the dust from a gravel road and depositing it in my socks. With my brain moving 90 miles an hour and my feet steadily pounding away at 4 miles an hour or so, I walked with purpose.

But I should have. I know there are people who want to walk, but their bodies don't let them.

There are people who would love to witness the vivid colors of seasons in Kansas, but their eyes can't see them, due either to a physical ailment or a weary heart.

Sometimes beauty happens where you least expect it. Sometimes we have to look a little harder to find it. When we were in San Francisco back in 2007, we toured the prison at Alcatraz Island.

There was nothing beautiful about the buildings, which had served as a federal prison for years and were covered with graffiti. But while there, I took one of my all-time favorite photos. 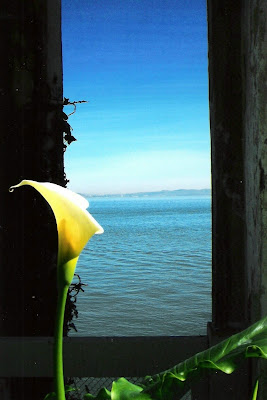 In the midst of all the ugliness, there was a calla lily, framing a view of the ocean.

At the K-State football game last week, I was struck by another irony. It was a typical college football game day atmosphere, full of laughter, music, families and fun. 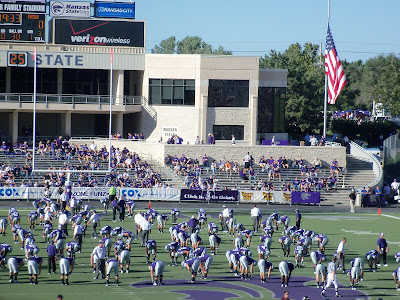 But on the north end of the stadium, the huge American flag hung at half-mast. It was September 11th. There was a moment of silence to remember those who lost their lives on 9-11 and the troops who have fought the war on terrorism since then. A group of young recruits took their oaths to serve their country in front of a stadium filled with 50,000-plus people.

There was another goosebump moment when the team ran onto the field, following linebacker Brian Hertzog, who had the privilege of carrying the American flag that day. 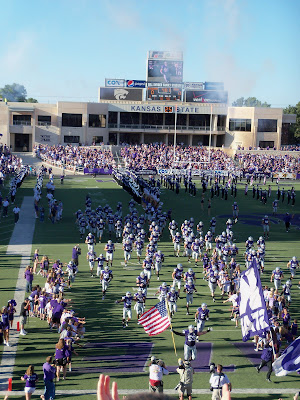 With the huge Stars and Stripes gently rippling in the background, we listened to the same Ceremony of Allegiance that we hear every game day.

But on September 11th, the words seemed to have more weight:

"We the People of the United States, in Order to form a more perfect Union, establish Justice, insure domestic Tranquility, provide for the common defense, promote the general Welfare, and secure the Blessings of Liberty to ourselves and our Posterity, do ordain and establish this Constitution for the United States of America." 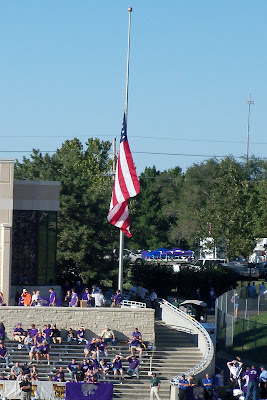 Instead of singing "The Star-Spangled Banner" by rote, the familiar tune struck a new chord.

The opportunity for appreciating all we have comes each and every day. Sometimes, the appreciation is buried under a voluminous to-do list, a weary body, a tired spirit.

But then there's the Message:
God wants you to know
This world was made for you.
Enjoy it, explore it, experience it.
Don't hold back. It is God's gift to you.
Don't be a wallflower in the dance of life.
***
Dear Lord,

Today, instead of being a wallflower, help me to be a sunflower, helping to shine Your light in this world. 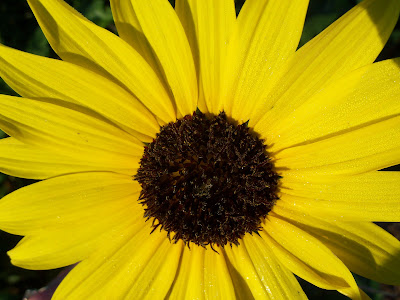 Help me to never forget the joy in the dance of life and to give thanks in everything. 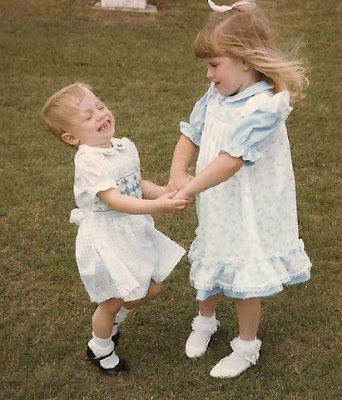 Email ThisBlogThis!Share to TwitterShare to FacebookShare to Pinterest
Labels: life, Message from God