A Salute to Labor

I believe in the dignity of labor, whether with head or hand;
that the world owes no man a living
but that it owes every man an opportunity to make a living.
John D. Rockefeller 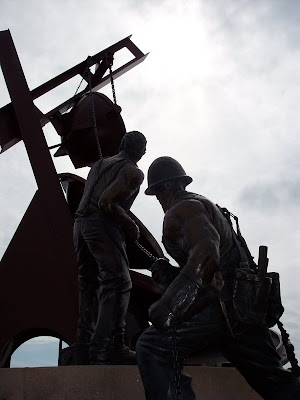 In 2003, Omaha artist Matthew Placzek was commissioned to create Labor, the second largest labor monument in the country. It's located on Omaha's riverfront near the Lewis and Clark National Historic Trail Center and the Bob Kerrey Pedestrian Bridge. 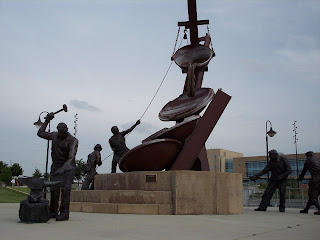 Placzek used 250 tons of cement and 39,000 pounds of steel in the sculpture, which reaches 30 feet in height. That qualifies as labor, don't you think?

It depicts five 8-foot-tall workers toiling at a variety of tasks. Eight Omaha union locals and 26 companies and individuals donated more than $1 million in contributions and yes, labor, to bring it into being along the river. 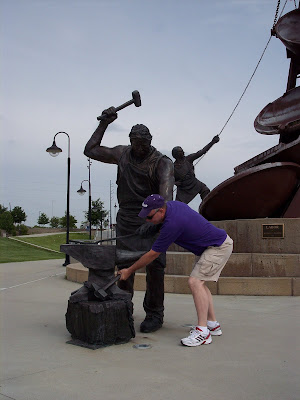 You probably won't be able to tell which ones are the statues and which one is Randy, since they all feature sculpted sinews muscles and bulging veins and commanding brute strength. 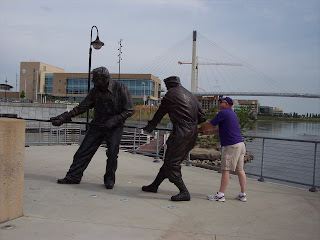 I took the photos when we visited Omaha this past May, but I thought this Labor Day was the perfect opportunity to share them.

For most Americans, Labor Day is a time to fire up the barbecue for the symbolic end to the grilling season. (As a beef producer, I hope your menu includes some hamburgers or steak today!)

It's the chance to go to the lake for another adventure before winterizing the boat or closing the cabin for the year.

It's a vacation day ... a day to sleep late, eat what you want and spend time with family and friends.

Kind of ironic, isn't it? Labor Day doesn't have much to do with actual labor.

Here on the County Line, it's just another Labor Day. Yes, we are working today. I'm about to go out to help move cattle, then the guys will be putting on anhydrous and swathing sudan. I'll be taking lunch to the field and probably supper, too.

But before you feel too sorry for us, I have to admit that our holiday was on Saturday for K-State's 2010 college football season opener. We met the newest member of the family, Braden, the son of my nephew, Blake, and his wife, Tamara. 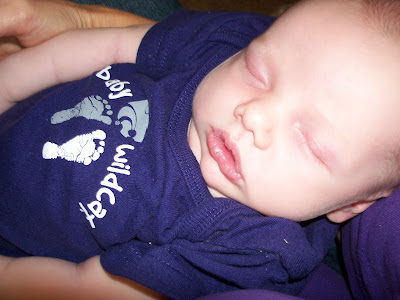 We ate brunch and spent time with the family. And, of course, we cheered on our beloved Wildcats (more on that later). They got a victory for 2-week-old Braden's first K-State game. 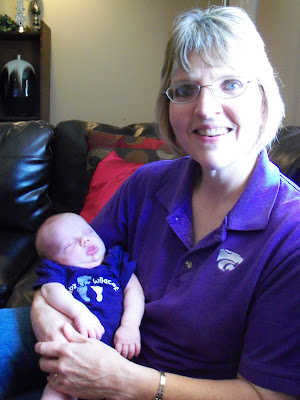 So, while I liked the John D. Rockefeller quote at the top of this post, I also had to include this one:

Of course, we choose purple.