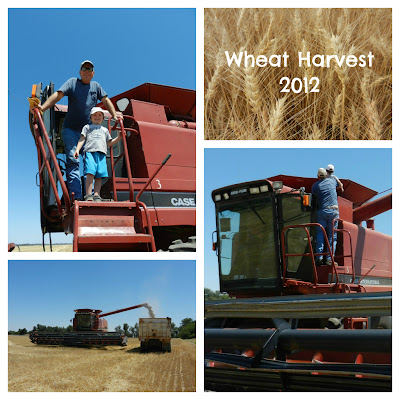 There are no seven wonders of the world in the eyes of a child.
There are seven million.
~Walt Streightiff


Maybe what the world needs is 4-year-old vision. What would life be like if we approached it with the fascination and wonder of a child?

Randy picked up an extra rider for a little bit on Monday afternoon. Adam, age 4, came to the farm to ride a combine. I'm not sure who had more fun -- Adam or Randy.

"We are going to have a great time," Adam declared, big as you please as he joined Randy in the combine cab. 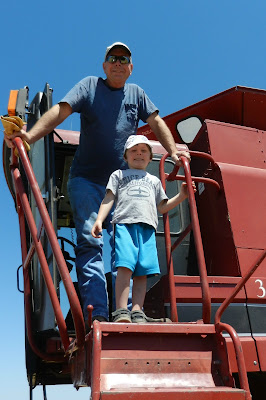 Adam lives in Hutchinson with his parents and his baby brother, Asher, who had to watch from the sidelines as Adam rode shotgun with Randy. 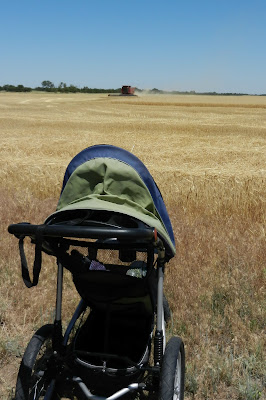 His mom, Katie, said that Adam has been asking lots of questions about combines, so she and husband, Jared, who both grew up in Stafford, decided to see if they could get him an up-close-and-personal look at Harvest 2012. We were happy to oblige.

Here on The County Line, we strive to keep the helpers happy. So I fixed both boys a snack in brown paper bags labeled with their names. Combine driving makes you hungry for M & M Cookies, washed down with a bottle of water. 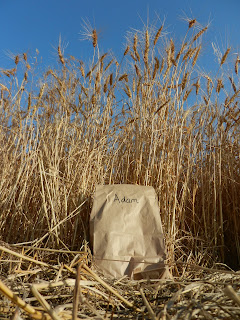 Adam learned about the header ...
about the grain collecting in the bin behind the cab ...
about unloading the wheat into the truck ...
about all the gadgets in the combine cab ...
And lots more.

His mom says that Adam informed them that, "Wheat is in the bread that makes my peanut butter and jellies!" (That just happens to be his favorite food.)

Randy was quoted in an article in The Hutchinson News this past weekend about fewer young people returning to their rural roots to farm. Adam definitely has the farming bug at the moment. We'll see where he is in 18 years or so.


The world is as many times new as there are children in our lives.
~Robert Brault
Posted by Kim at 6:45 AM