The Circle of Life

As one crop nears harvest on the County Line, another begins. Does anybody else hear "The Circle of Life" from The Lion King soaring in their brain? It's probably just me.

Randy just called and said someone had test cut a wheat field north of Stafford. Evidently, it was too wet to cut, since just a small strip was gone. But, ready or not, harvest is coming. The guys got the combine and the truck out of the shed yesterday. I got some cookies made, packaged in twos and in the freezer over the weekend. They are handy to grab to put in lunches during the busy harvest time. 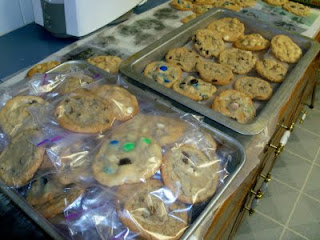 The weekend also brought some hail to our area. We had pea-sized hail at the house on Saturday evening, so as the sun began its descent toward the horizon, Randy and I made a crop condition tour in what real photographers would call "the golden hour." The golden hue was also a product of last week's southerly winds that continued to push the 2012 wheat crop toward harvest some three weeks ahead of schedule.Those winds are set to make their return today after a couple of pleasant, more seasonal days. 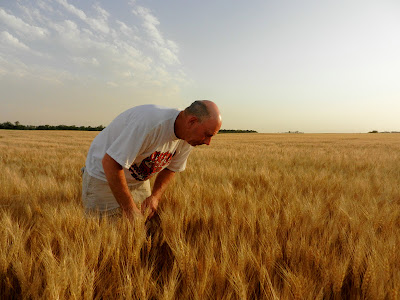 The weekend hail damage varied from field to field. Here, Randy found a few wheat stalks broken over. However, south of the farm headquarters, Randy estimates a 25 percent loss in one field. Friends south of Zenith and north of Stafford had even more damage from hailstones the size of golf balls. 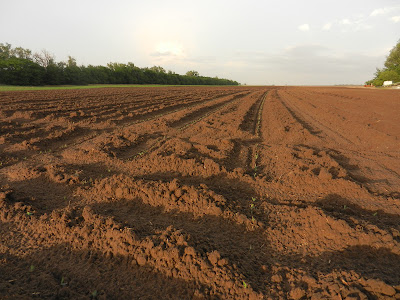 The forage sorghum (silage) plants that were just emerging appeared to weather the hailstorm relatively unscathed. The plants seem to march down the rows like tiny green soldiers, still standing strong despite being pelted with small hailstones. 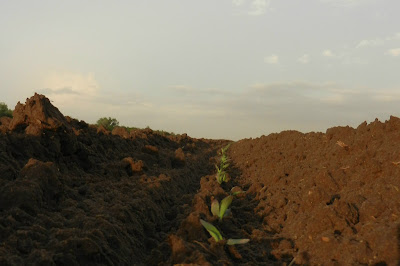 The quarter to half inch of rain we got along with the hail will help give a growth boost to the silage crop, which we'll harvest for additional winter feed for our cow/calf pairs and feeder calves.

It's hard to believe that these little plants will tower above Randy's head later this summer - if we get the rain to make it grow. (Considering last year's drought, that's a big "if.")
Silage harvest is our version of the movie, Jaws. Read about it while I contemplate all the ways I'm not ready for wheat harvest 2012. Maybe instead of The Circle of Life theme song, I'm hearing that suspenseful music that the shark is about to attack ...
Posted by Kim at 7:29 AM