There's a song in the musical, The Music Man, called "Ya Got Trouble."

Ya got trouble,
Right here in River City!
With a capital "T"
And that rhymes with "P"

In the musical, the "P" stands for "pool." A shyster band instrument salesman is attempting to line his pockets when he tells mothers that the boys of River City are frittering away their time in the billards hall instead of striking up a band. That's not what any self-respecting mother wants to hear, so, of course, they line up to purchase instruments from the con man.

(My brother was The Music Man in Pratt High School's version of the musical years ago. I was only a little bit jealous that he got to star in one of the world's favorite musicals, when I don't even remember the name of my junior-class play. I do remember my famous line, "Oh woe is me! Oh lack-a-day!" Yeah, that's kind of how I feel about The Music Man vs. the I-can't-remember-the-play-for-the-life-of-me play.)

ANYWAY, as I stood at the corner south of our house on Saturday, the sound track of my mind played that song, even if I couldn't remember all the words until I pulled it up on YouTube.

The truck was nearly blocking the east-west road, with its tail-end perched in the weedy ditch.  It was dead, no matter how much ether Randy sprayed into it while I turned the key and pumped the gas and prayed that it wouldn't blow up.

I volunteered to stay with the truck while he went to grab some tools. Randy looked at me and said, "I think they'll see it." 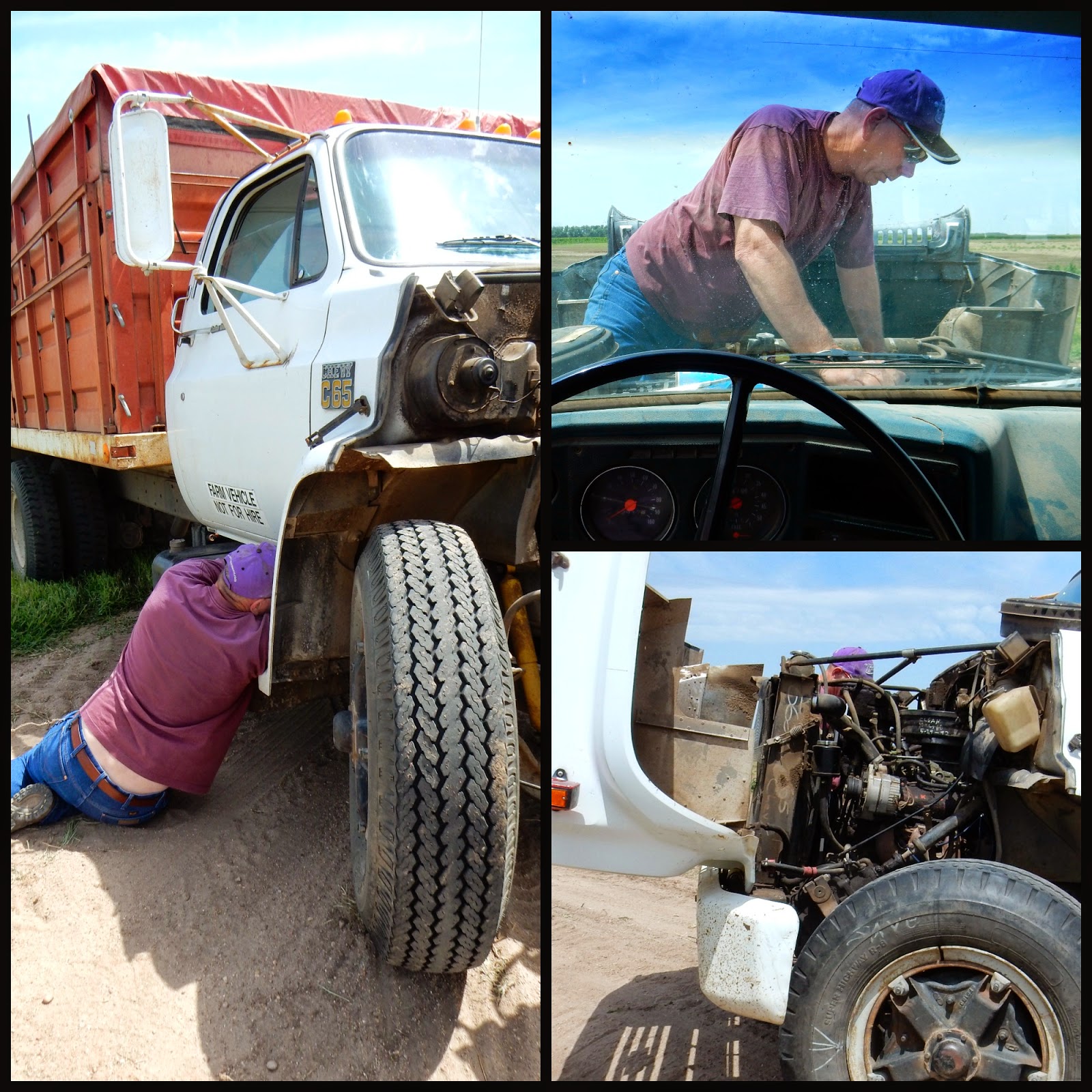 "T" definitely has stood for "trouble" during Wheat Harvest 2014. But I substituted "problems" for the "pool" for my letter "P" in my personal soundtrack version of the song by Meredith Wilson. No matter what Randy tried, he couldn't get the truck started. And while there's not a lot of traffic on our road, we did need to get it out of the way. We tried using the pickup at first, but the ground was too soft for it to get traction. The combine successfully pulled the truck back into the field. It's still sitting in the field with a load of wheat on it. Thankfully, it's wheat from ground we own, not some we share with a landlord. 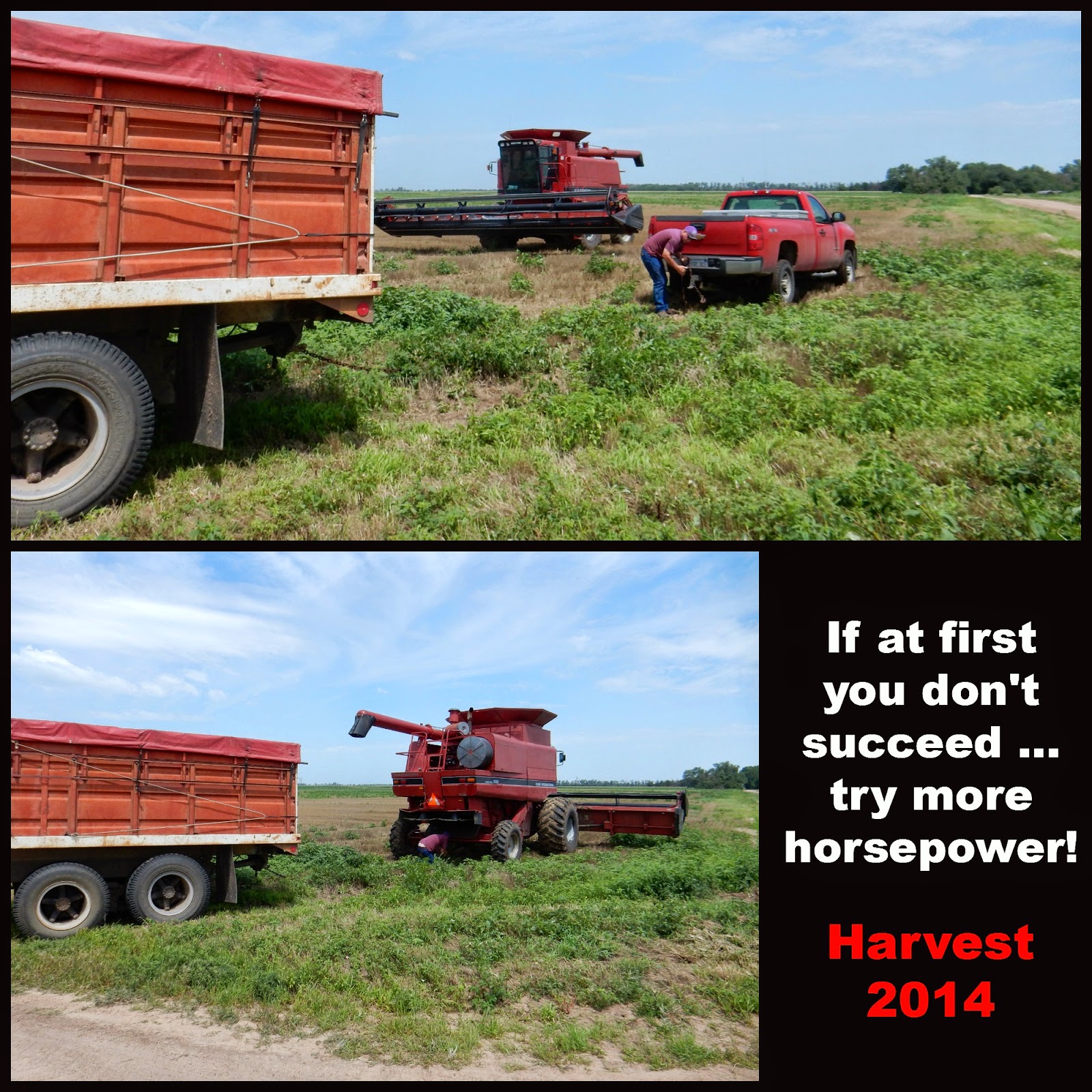 The truck problems were just the latest in a hit parade of headaches for Harvest 2014.

Yesterday, as Randy was trying to finish up in a field that had been too muddy on Saturday, the combine's air conditioner went out. He toughed it out, but ended up sweltering in a closed cab on the 100-degree afternoon. He got half of it cut, but the rest was still too muddy. 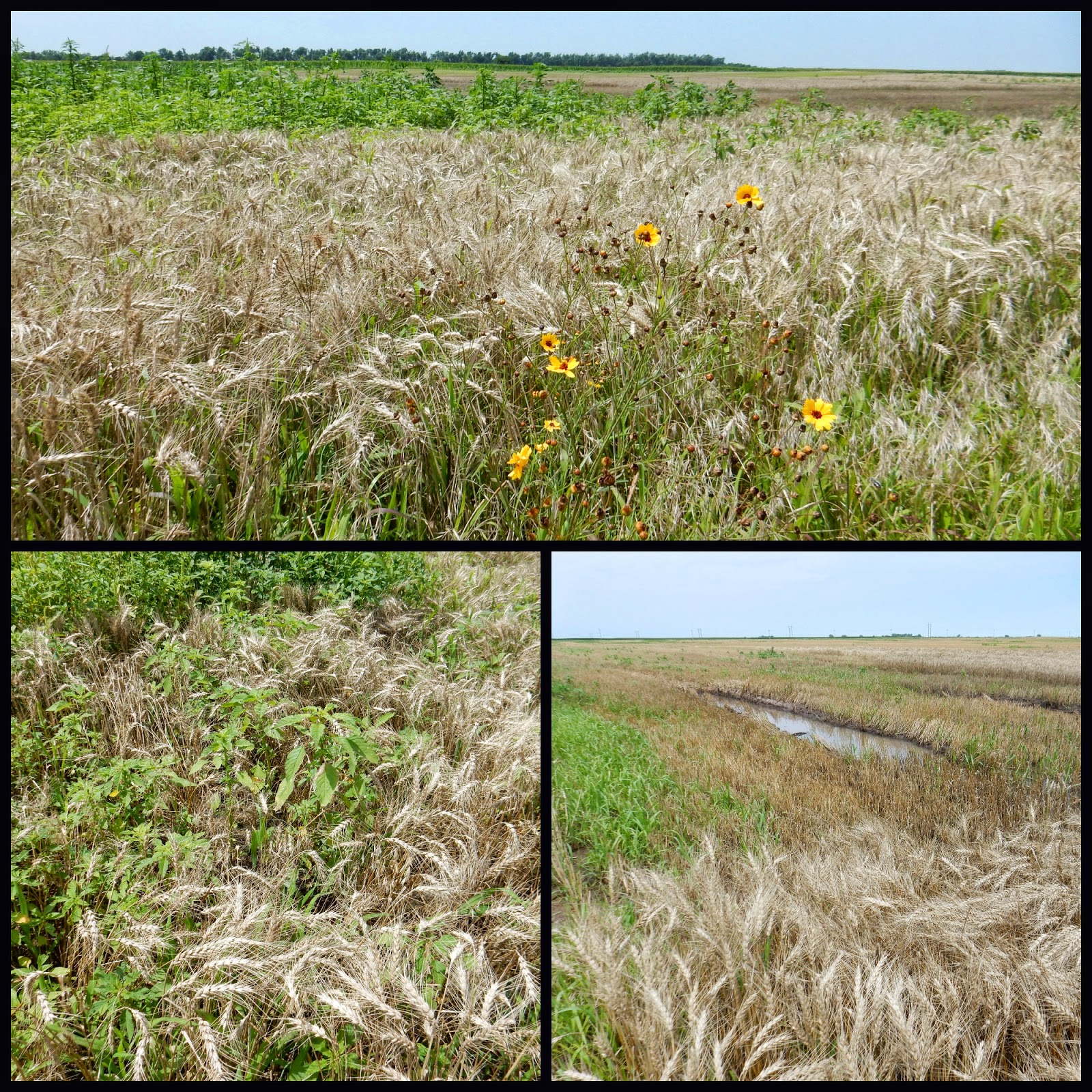 Water and weeds have been two challenges for this year's crop. Ironically, we didn't get enough rain during the growing season. However, once harvest started, we kept getting rains that kept us out of the field for more than a week.

Because the wheat was so sparse, the rain also gave a boost to weeds. We weren't the only ones who ended up leaving some wheat behind in weeds, especially by the edges of the fields. (We did spray a few fields for weeds. However, that's an additional expense for a less-than-bumper crop. And you have to wait a week after spraying to harvest.)

Last year, we had the best harvest we'd ever had, despite planting into dust and several late freezes. For harvest 2013, our overall yield average was 52.7 bushels per acre. Our highest yielding field was 76 bushels per acre, and our lowest was 32 bushels per acre on ground that is primarily used for hunting by the landlord. 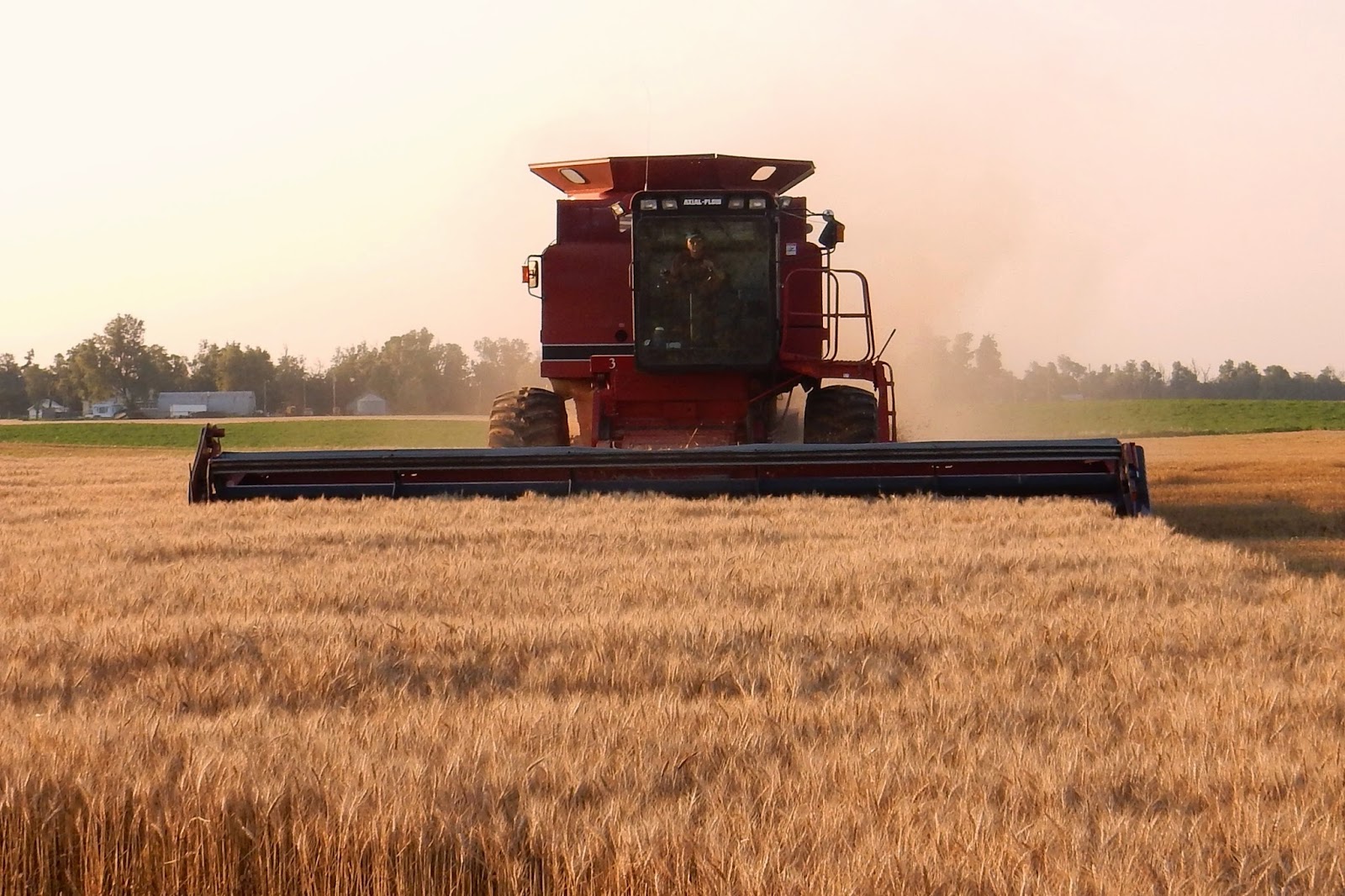 We started harvest on June 17. For all intents and purposes, we got done on July 7, nearly three weeks after we pulled the combine into the first field. That may be the longest marathon for wheat harvest in our 33 years of farming together.

A farmer is an eternal optimist, though that may be hard to remember when the truck is blocking the road or the combine is blowing only hot air into the cab. When it's time to plant wheat in September, Randy will pull into each field, hoping and praying for the best. And we'll see what Wheat Harvest 2015 will bring.
And the guys are on to swathing and baling hay. With farming, there's always the next thing.
Posted by Kim at 8:02 AM