When I was in fifth grade, my parents took the whole family on a Christmas break trip to California. It was quite an adventure for a little Kansas girl. Now, when I think about it as a parent, I marvel that Mom and Dad put four kids in a car - one a toddler - and drove us halfway across the country for this big adventure.

We visited Mickey Mouse. We dipped our toes in the Pacific Ocean for the first time. We experienced Sea World and the San Diego Zoo. We drove across the border into Mexico, where we were not permitted to eat or drink anything and almost starved to death. (OK, that's what my 11-year-old brain thought since we didn't get to eat lunch until mid-afternoon. This Midwestern farm girl grew up eating at 12 noon on the dot!)

And we went to the Tournament of Roses parade, where I took roll after roll of photos of the flower-bedazzled floats. The thing is: They were all in black and white. Through the years, it became the family joke. (In my parents' defense, it cost a lot more money to develop color film back then, and it's not exactly like I was fast becoming Annie Leibovitz or anything.)

So, when I was snapping away yesterday afternoon in the wheat field, I told Randy that we were going to have a reenactment of the Rose Parade. However, this time, I was shooting in color. Yes, I shot 102 photos from about 6:30 to 9 o'clock last night. Randy is grateful for the advent of digital photography. 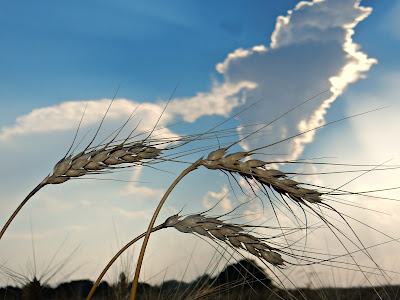 But, in my defense, it was just so pretty. As I delivered meals to the harvest field, thunderheads were illuminated by the sun in the western sky. Ripe wheat provided a foreground. (Randy thought I could PhotoShop Jesus in the cross-shaped cloud, and it would look just like heaven. But, alas, again no Annie Leibovitz around here and no PhotoShop either.) 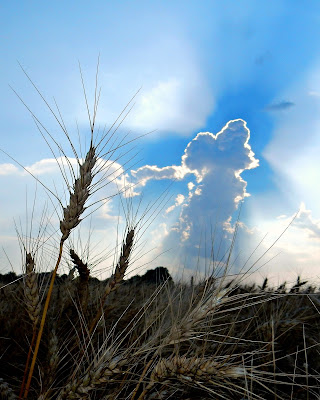 I rode the combine with Randy after the guys finished supper.
The sunset was no less spectacular than the views from the supper hour.
Like an old Western movie, Jake drove off into the sunset. 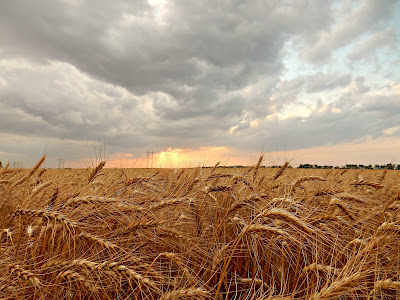 And I watched and waited as the sun set over a Kansas wheat field. 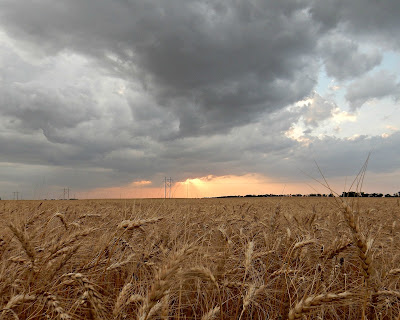 No Hollywood movie type could have arranged a more beautiful way to usher out the day.
At one point, it seemed the sun was balanced on the highline wire. 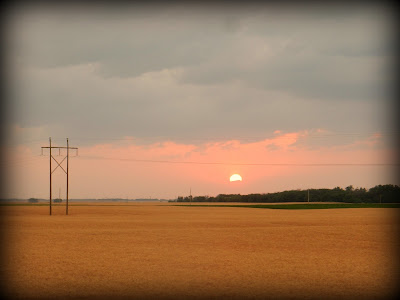 It was a great day: The guys were able to start cutting early. There were no breakdowns. (Knock on wood and turn around three times.) And I got some pretty stunning, non-black-and-white photos of this beautiful place we call home. Who needs a trip to Disneyland or the Rose Parade?
Posted by Kim at 8:02 AM