Aggie at the Auction 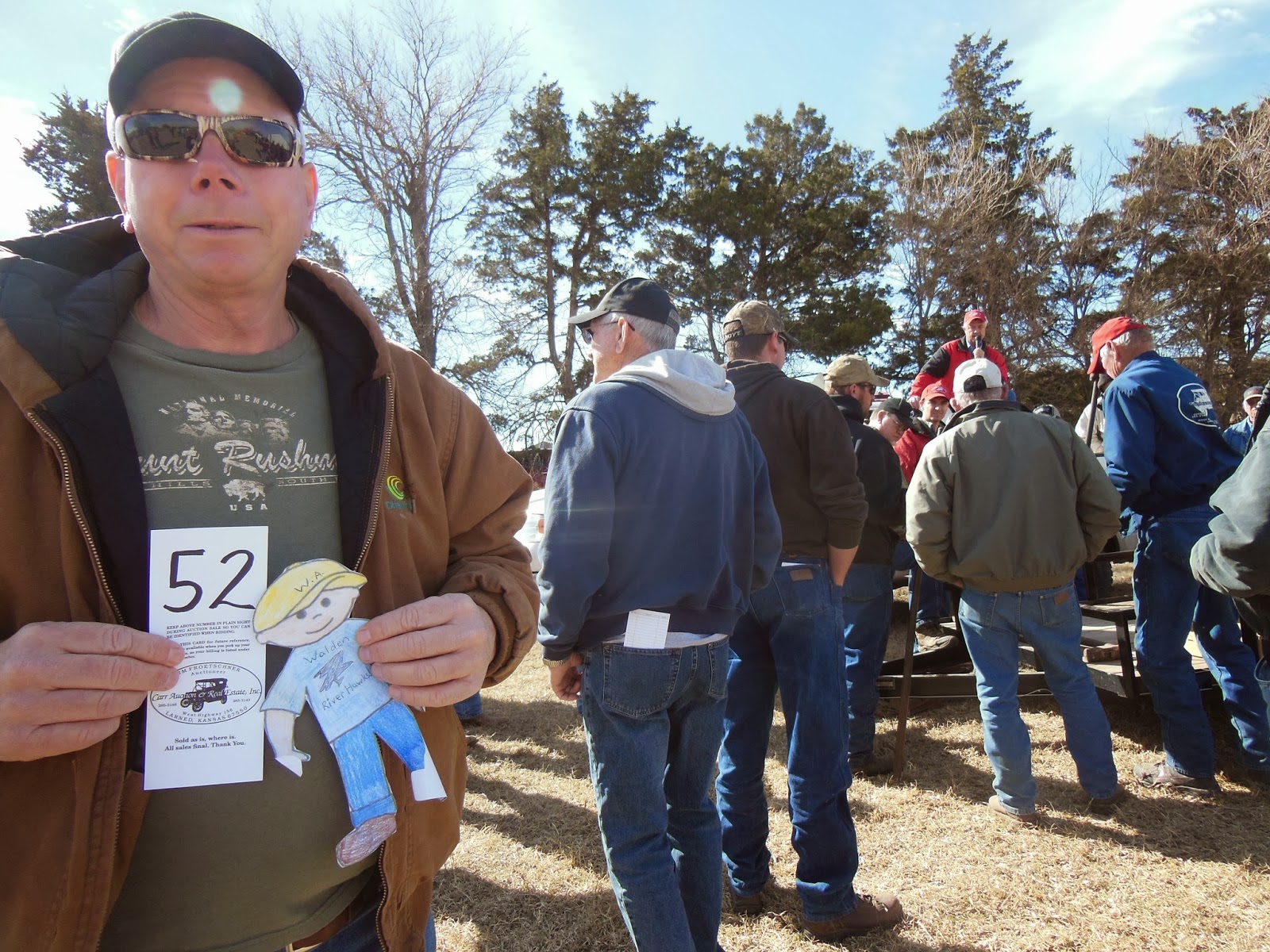 Since Aggie enjoyed himself so much at the cattle auction, we decided he should go along when a neighbor's family had a farm sale this week. Our neighbor died last year, and his girls have rented out the farm ground to another neighbor. So, they don't have a need for the equipment he used on their farm.

When we got to the auction, Aggie and Randy got an auction number, 52. That is the number Randy used to make his bids.

The auctioneers usually start with the "small stuff," which is typically put on trailers. Randy wasn't interested in any of those items. But a farm sale is also a good time to visit with your neighbors, so we did some of that while the auctioneers sold tools, fencing gear and other smaller items. Aggie checked it out, but he wasn't interested either. 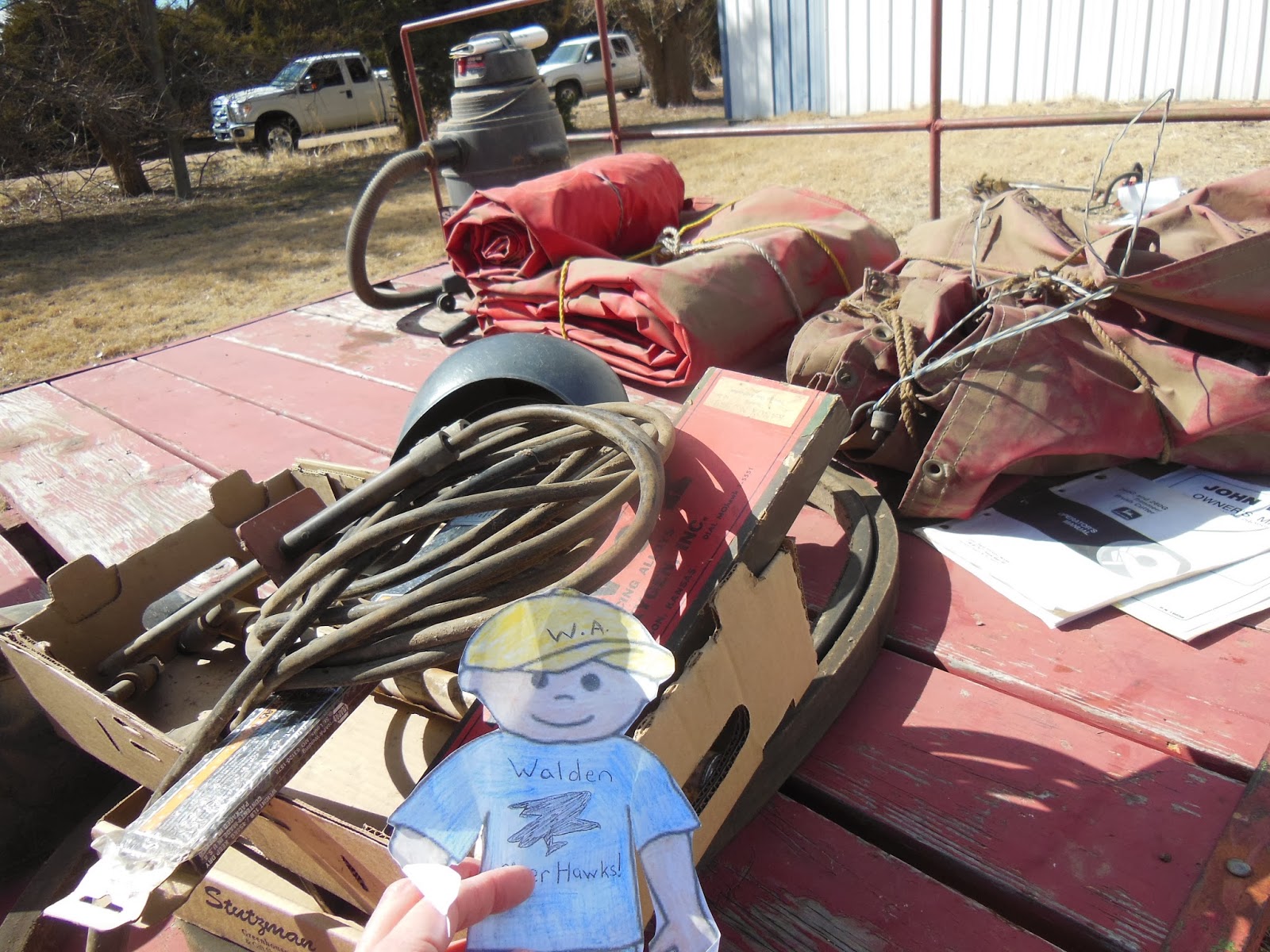 The auctioneer rides in the bed of a pickup truck. The bidders gather around the trailers or the equipment that's being sold. 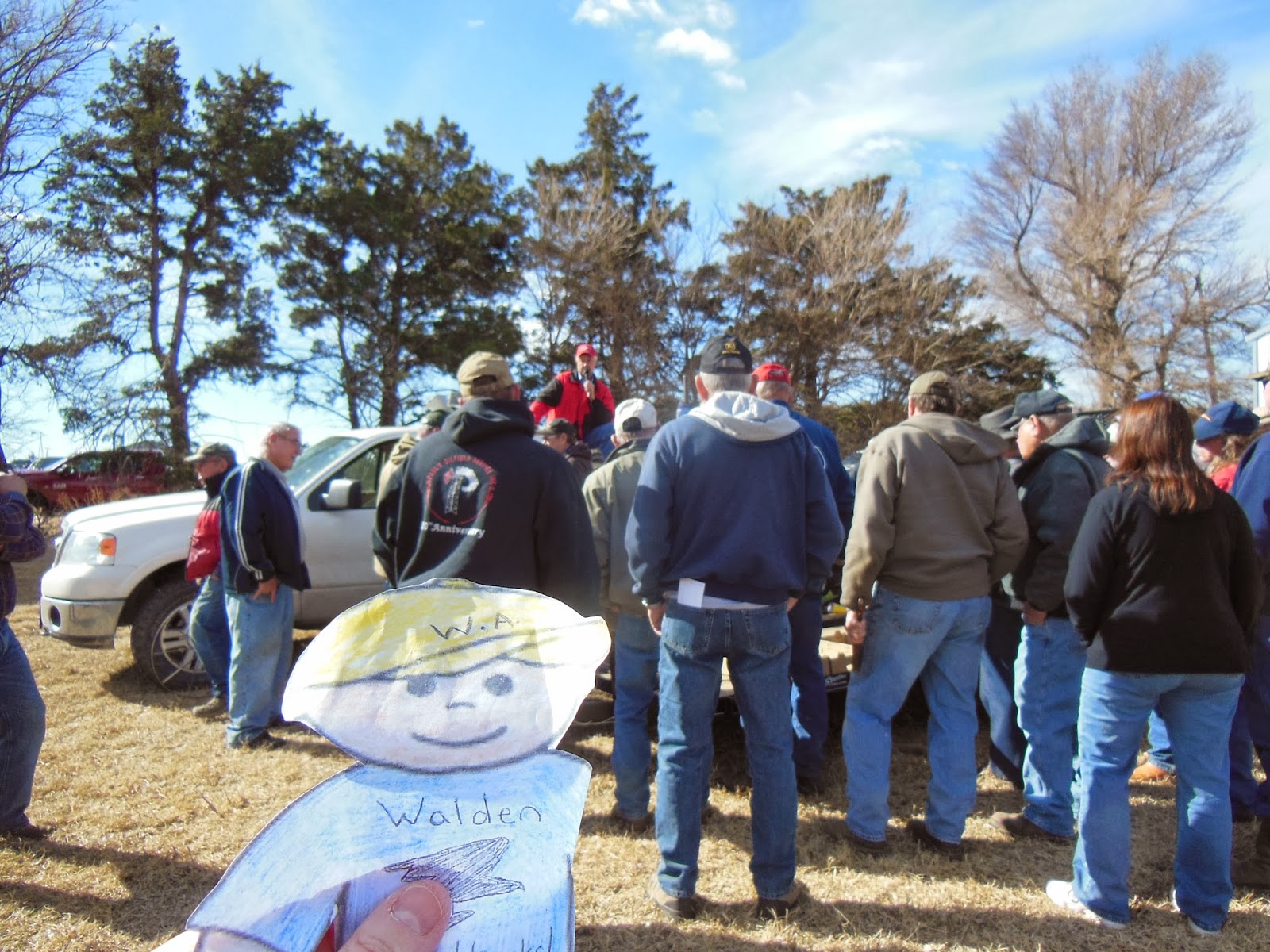 The auctioneer uses a microphone and does his auctioneering chant to try and get people to pay the most money possible for each item. 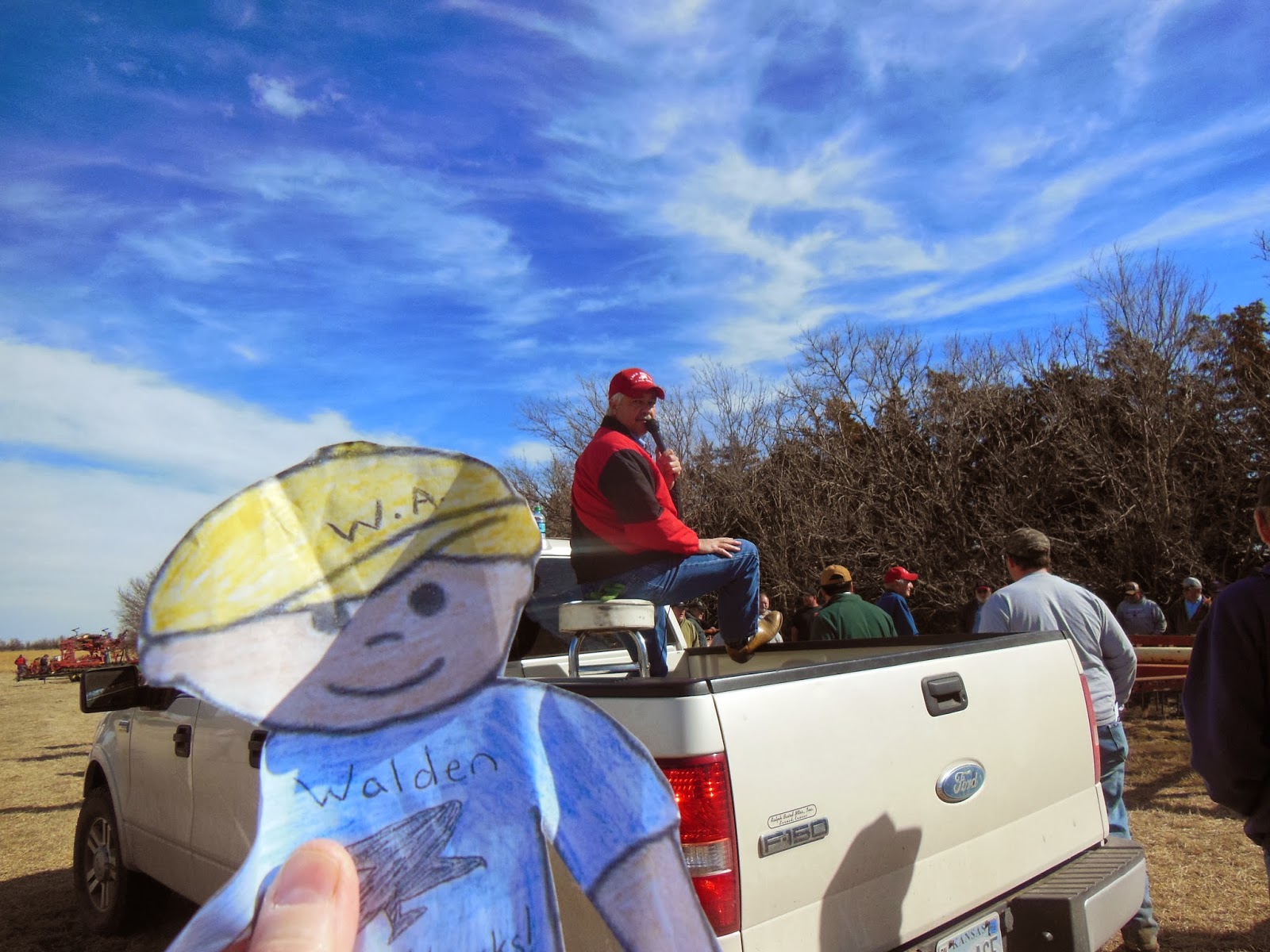 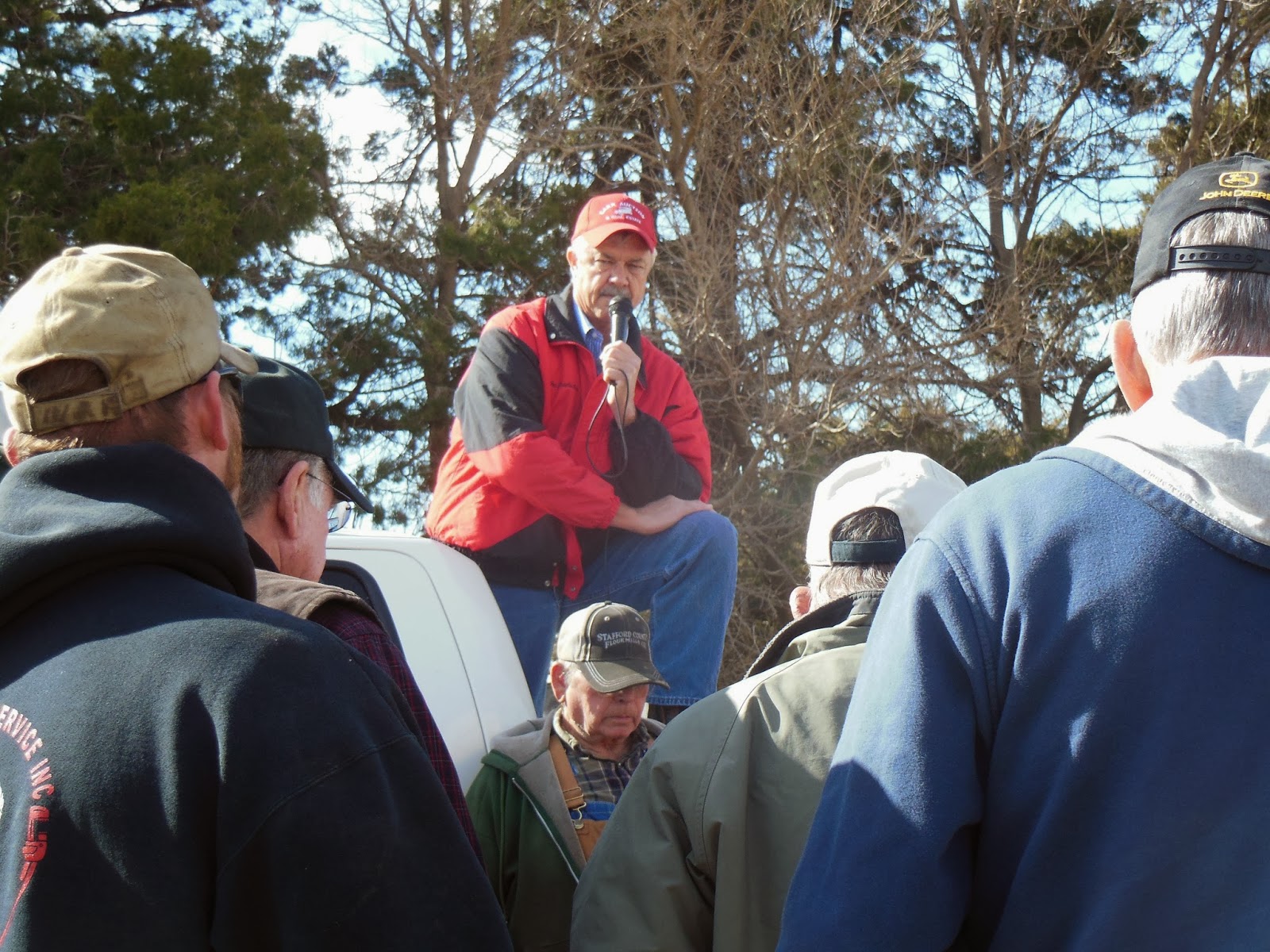 While they were still selling the items on the trailers, Aggie and I went with Randy to check out two pieces of equipment.

Randy wanted to bid on this chisel. If Aggie looked closely, he could see the points, the part that goes into the soil. A farmer would hook it up to a tractor and pull the chisel to break up and loosen the soil. The points also disrupt the roots of weeds in the field and kill the weeds. 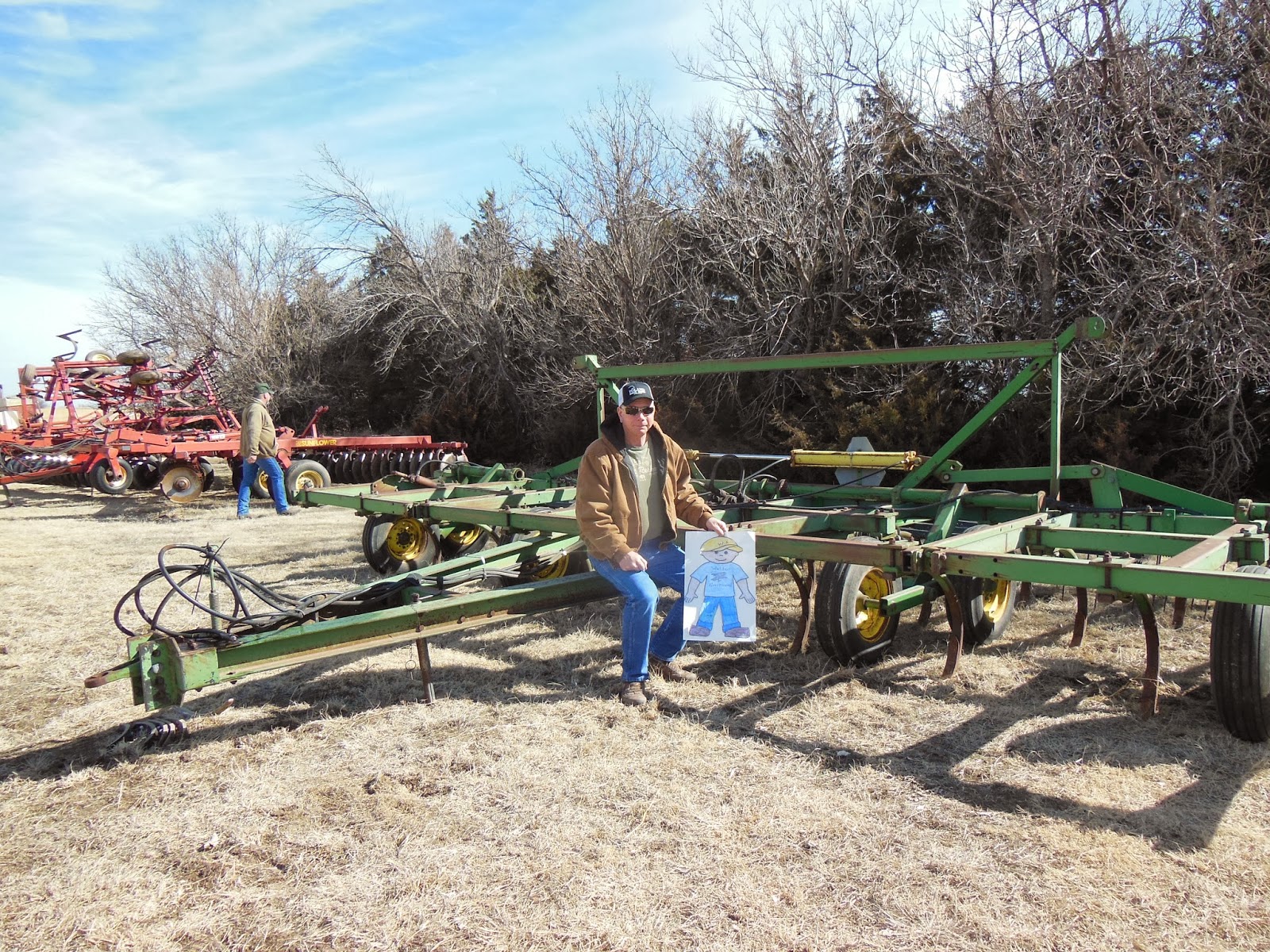 Randy also wanted to bid on a fallow master, which is used as a conservation tool. It doesn't dig as deeply as a chisel, and it leaves some residue on top of the soil which helps prevent wind erosion and conserves moisture in the field. Still, the sweeps will cut off the weeds. 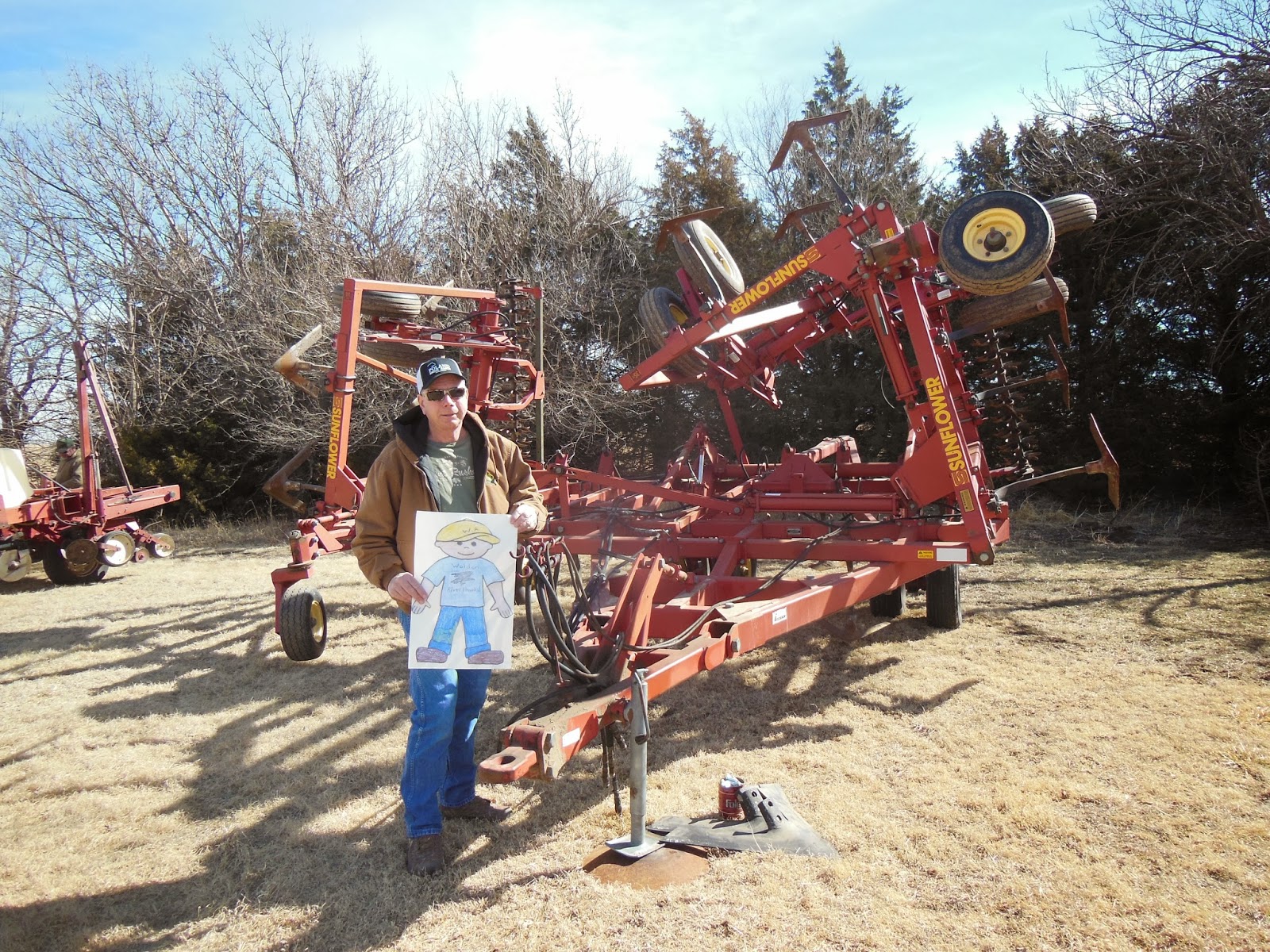 Below, Aggie checked out the pluckers, the round teeth-like wheels that pull up the weeds and also help level the ground. 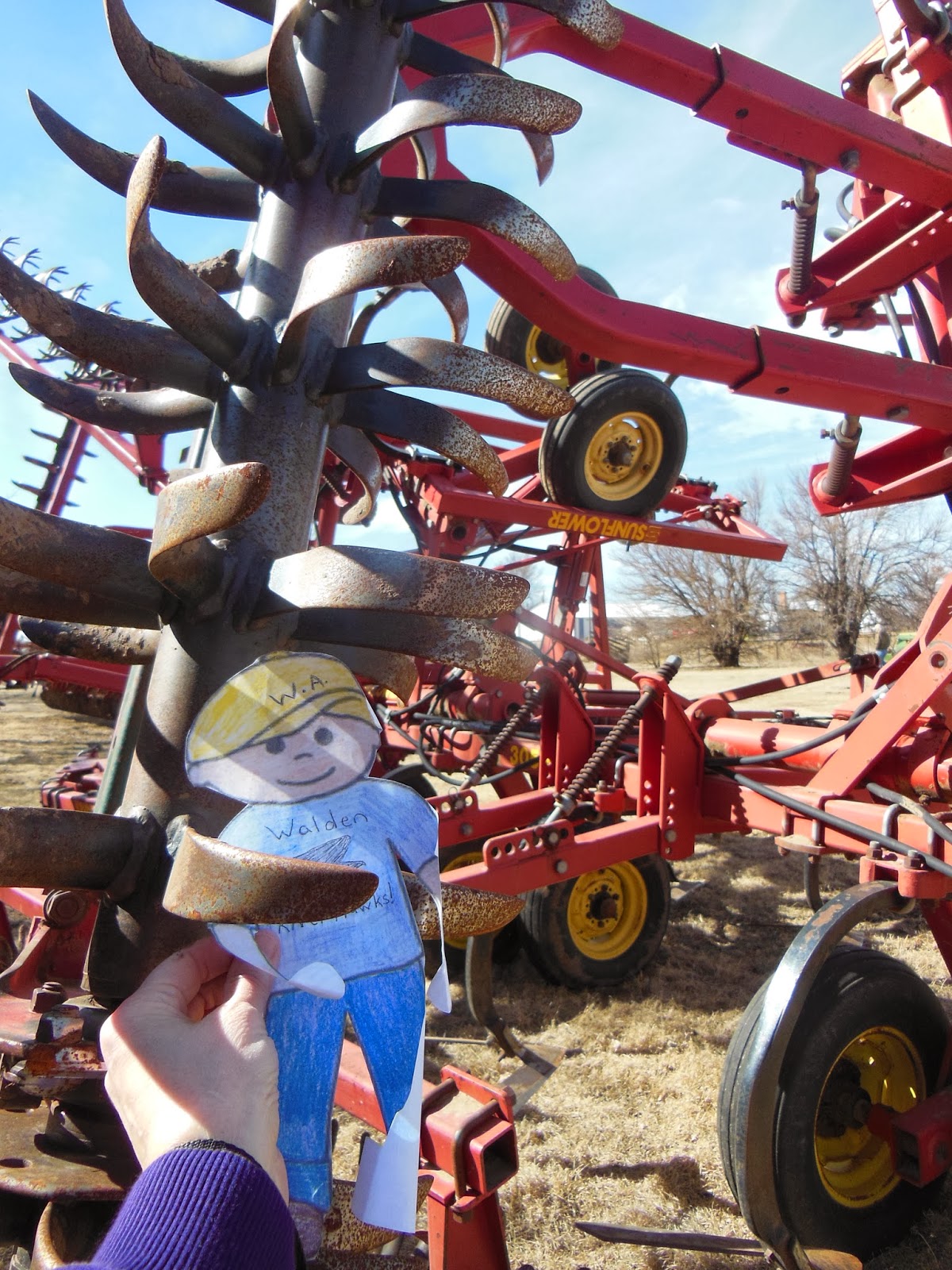 Randy quit bidding on the chisel because it went for more money than he wanted to spend. However, he got the fallow master for $22,000. That sounded like a lot of money to Aggie. It did to me, too. But a new fallow master would cost around $50,000. We purchase a few things new here on our farm, but much of the equipment we use on our farm is used, mainly because it's so much less money. 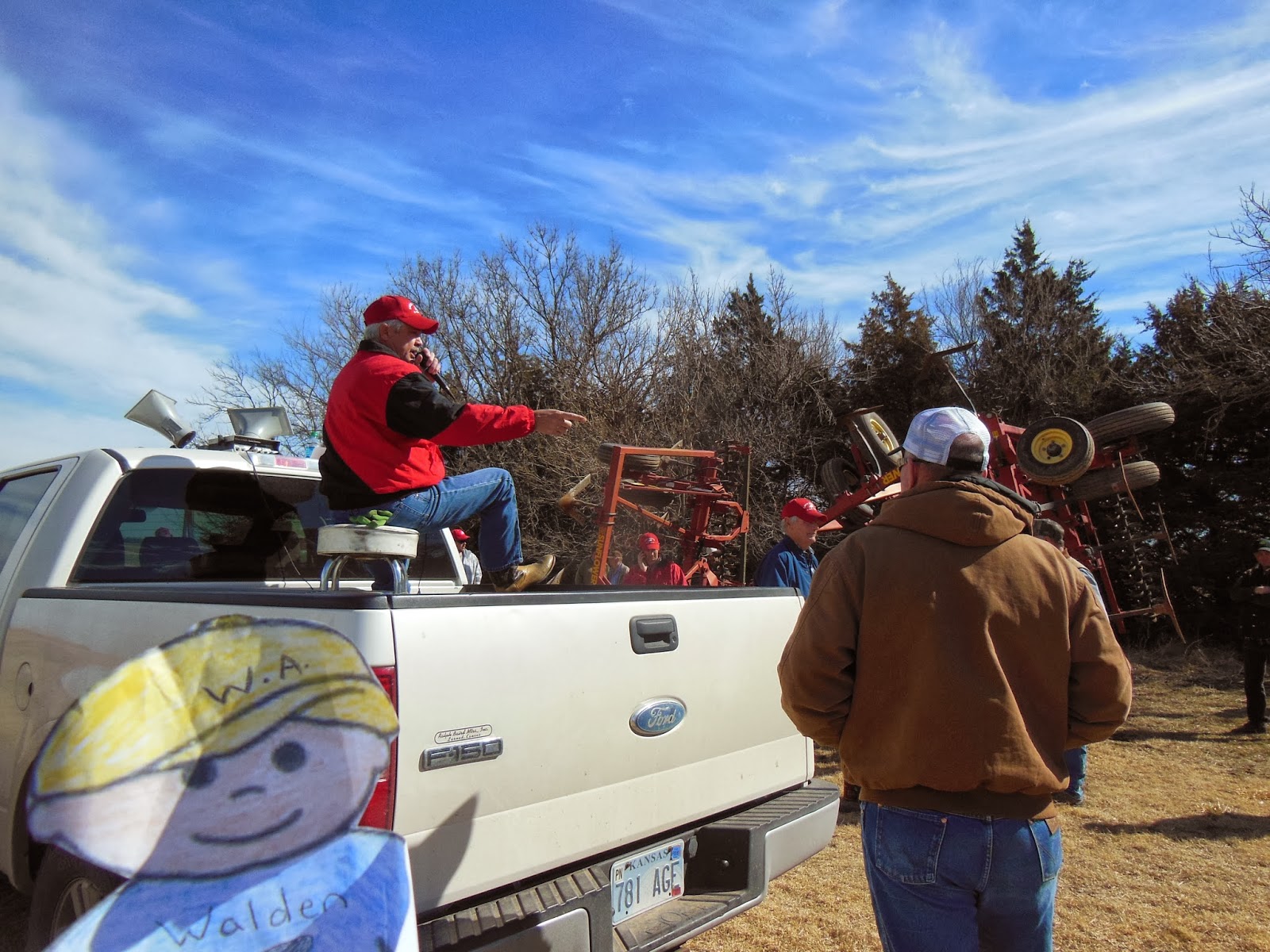 After the sale, Randy went to the auctioneer's portable office in a trailer. He told the auction clerk that his sale number was No. 52. She knew how much he had bid for the fallow master based on his auction number. So, he wrote the check and we were free to take it home. 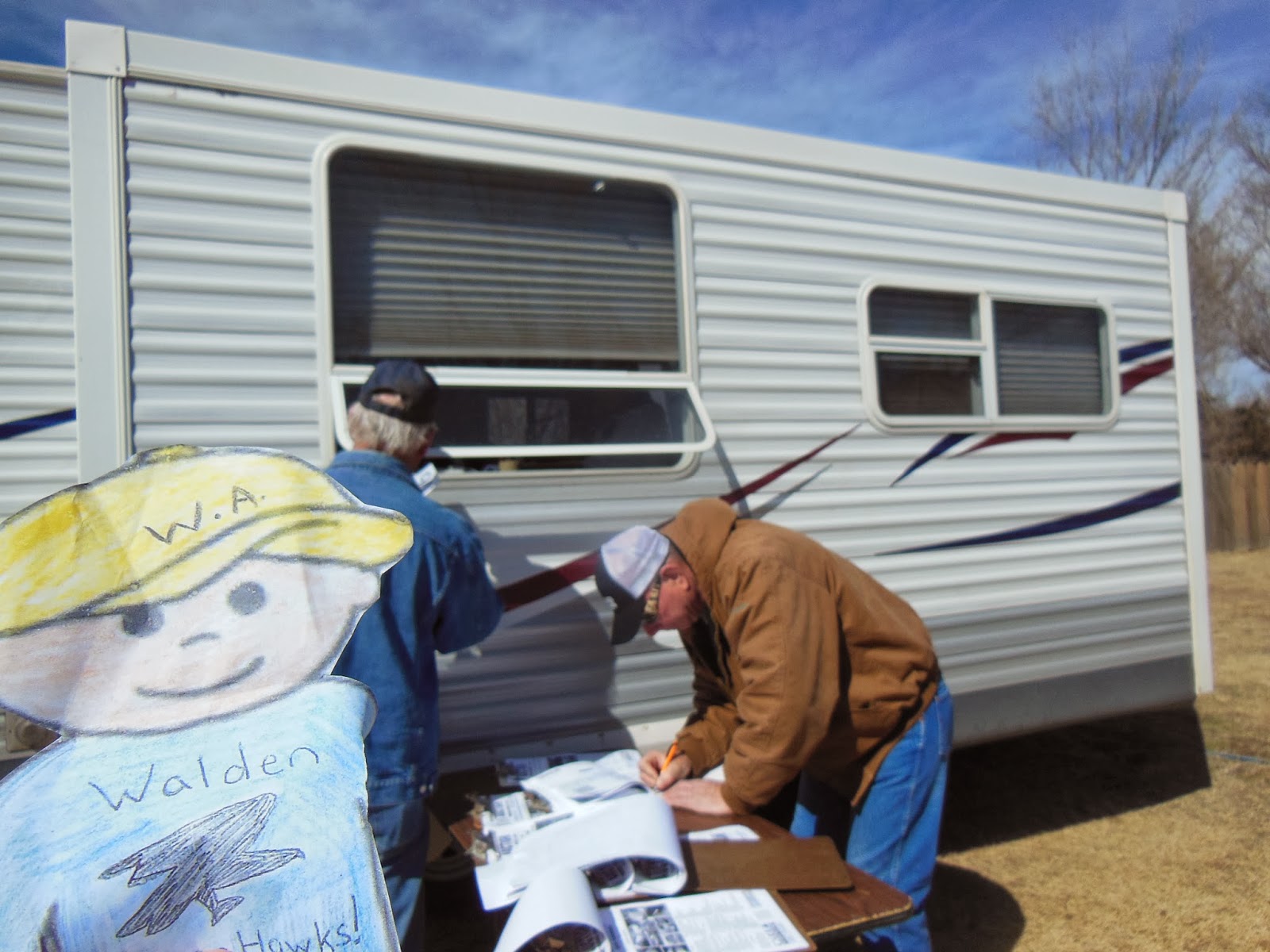 Aggie and I didn't bid on anything, but we enjoyed watching and visiting!


***
In case you've missed the introduction to Flat Aggie
Our buddy, Flat Aggie, is from Miss Holbrook's fourth grade classroom at Walden Academy in Willows, California. Flat Aggie is a project of my southeast Kansas blog friend, Nicole, and her Tales of a Kansas Farm Mom blog. Flat Aggie goes to farms all across the country to learn about agriculture. Aggie then reports back to the class with a letter (or blog posts) from the farm. Randy and I have been taking Aggie with us when we check cattle and do other things on the farm. We have enjoyed hosting him and helping him learn about life on a South Central Kansas farm.
Posted by Kim at 6:00 AM