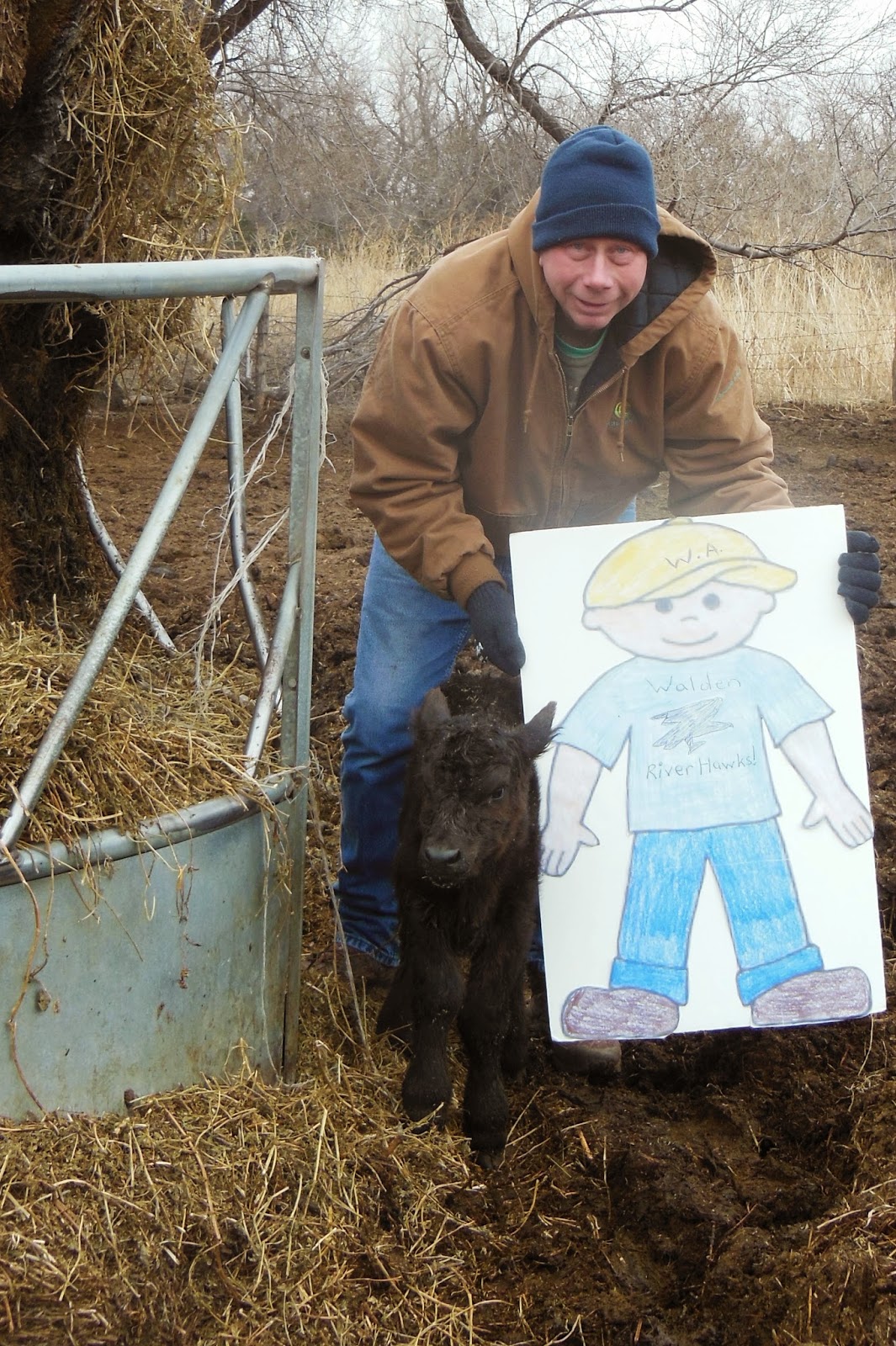 When we first welcomed Flat Aggie to our South Central Kansas farm, I asked a question about how truthful to be with Aggie and a classroom of fourth graders from Walden Academy in Willows, Calif.

Aggie arrived amidst sub-zero wind chills, and we promptly lost two calves, despite our best efforts. I want to clarify: I never intended to lie to the students and tell them that the calf we had worked so hard to save had survived. I just thought about not telling the story at all.

But, on the advice of both blog readers and Facebook followers, I decided to share the story in its entirety. Yes, we had a few calves die in bad weather, even though we worked really hard to help them and their mothers. (We had seven calves die this winter, two from birth defects and the others due to extreme cold. This was more than most years.)

As most people pointed out, many fourth graders may have already experienced the death of a pet or even a grandparent. Sometimes, we lose people and creatures that are important to us. In this case, these animals aren't our pets, but we are entrusted to care for them to the best of our ability. We don't like to have animals suffer or die. But death is a part of the life cycle. Fourth graders are old enough to know that.

For farmers and ranchers, there's an added consideration. The loss of a baby calf is also the loss of some income. When we sold feeder calves at the Pratt Livestock sale barn, new baby calves were selling for as much as $400. That is an unusually high price. So, besides it being emotionally hard to lose a creature in our care, it's also a loss to our farm income.

But I also don't want Aggie to leave Kansas without telling the fourth graders there were many more success stories than sad stories as we approach the end of our calving season. 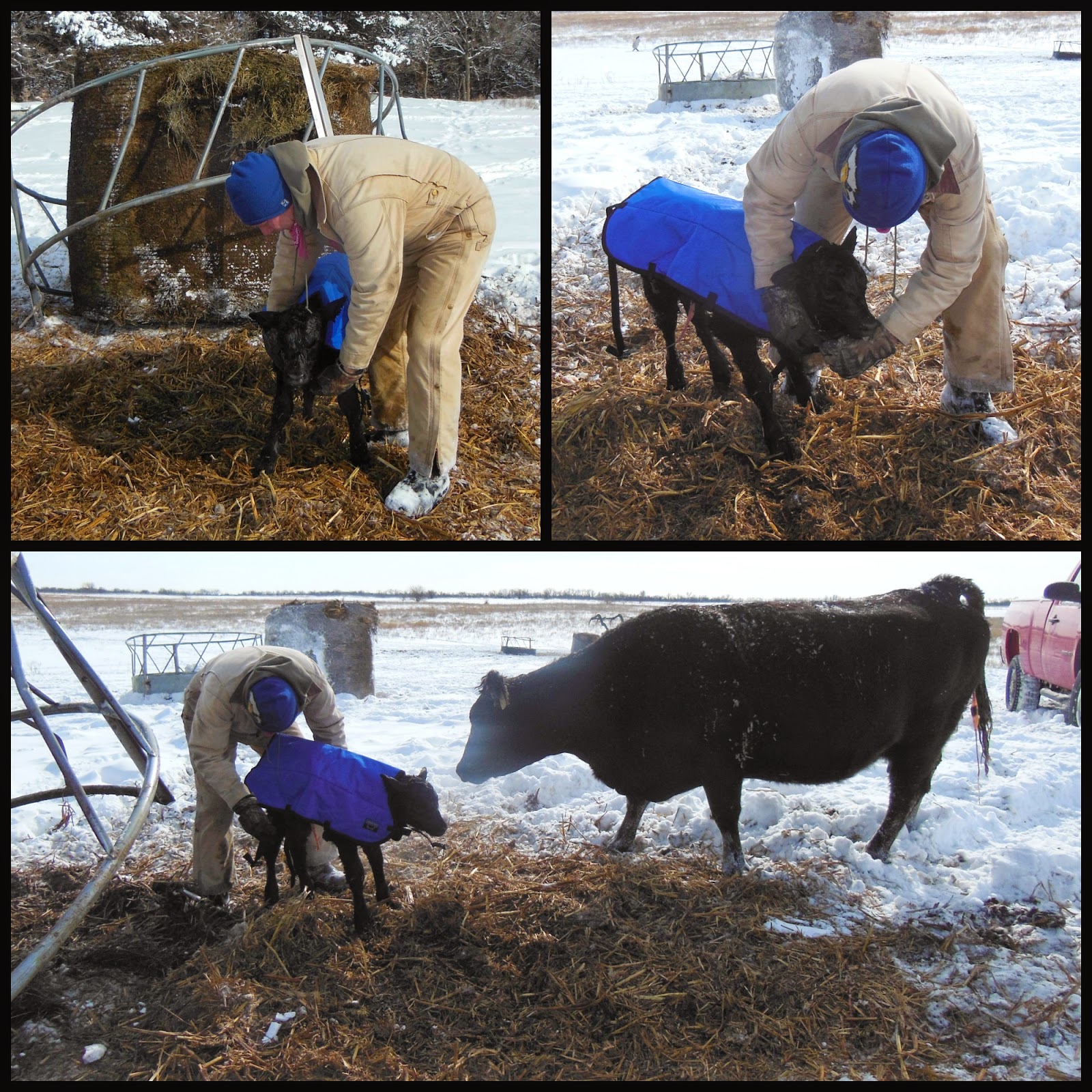 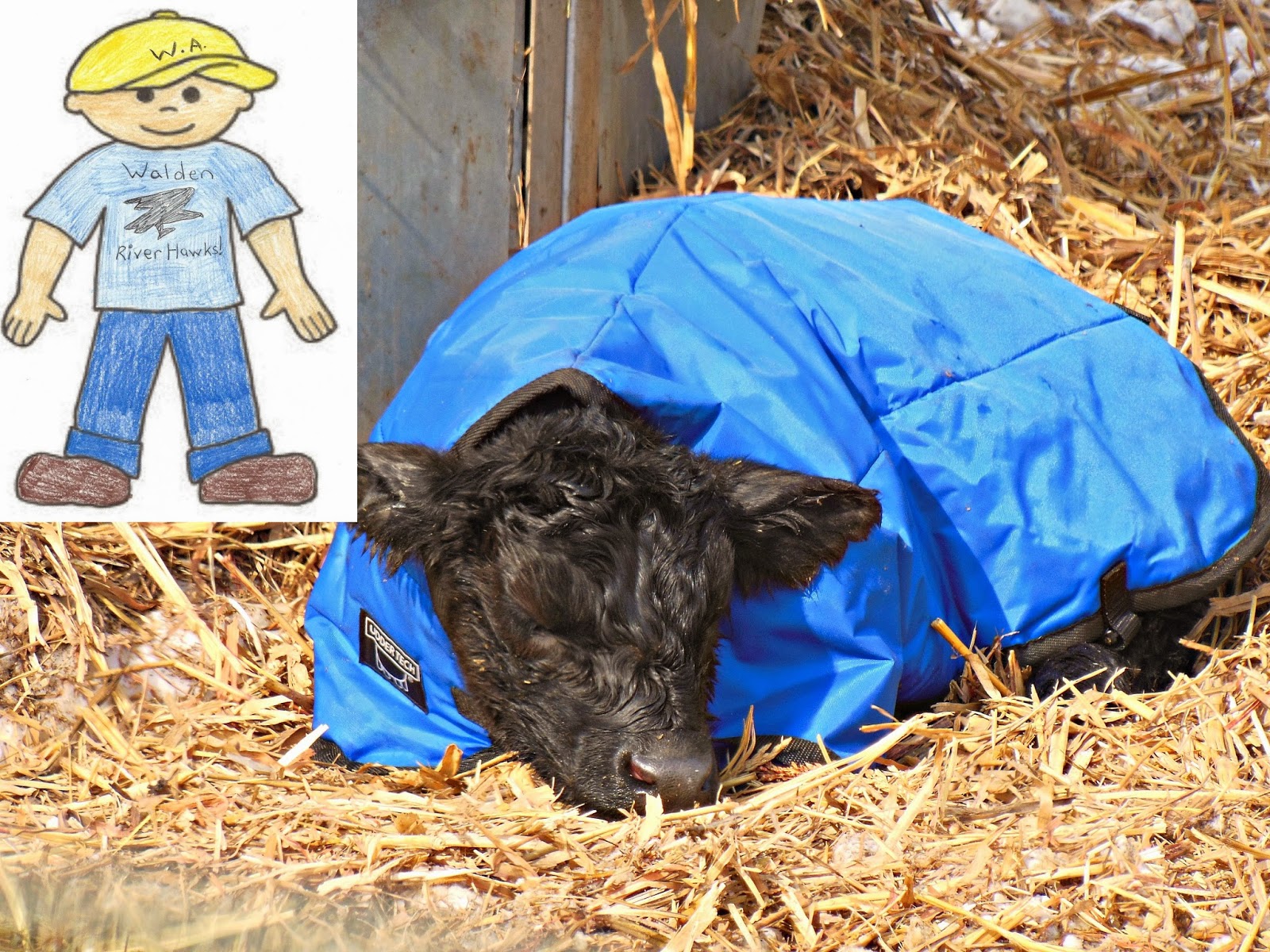 Sometimes, the jackets - plus some straw - helped the babies warm up and thrive.

Aggie also got another experience when he helped put an ear tag in a baby calf's ear. The calf was born to a heifer, a first-time Mama.  Randy puts the ear tag in so that we can match the baby calf to the heifer. 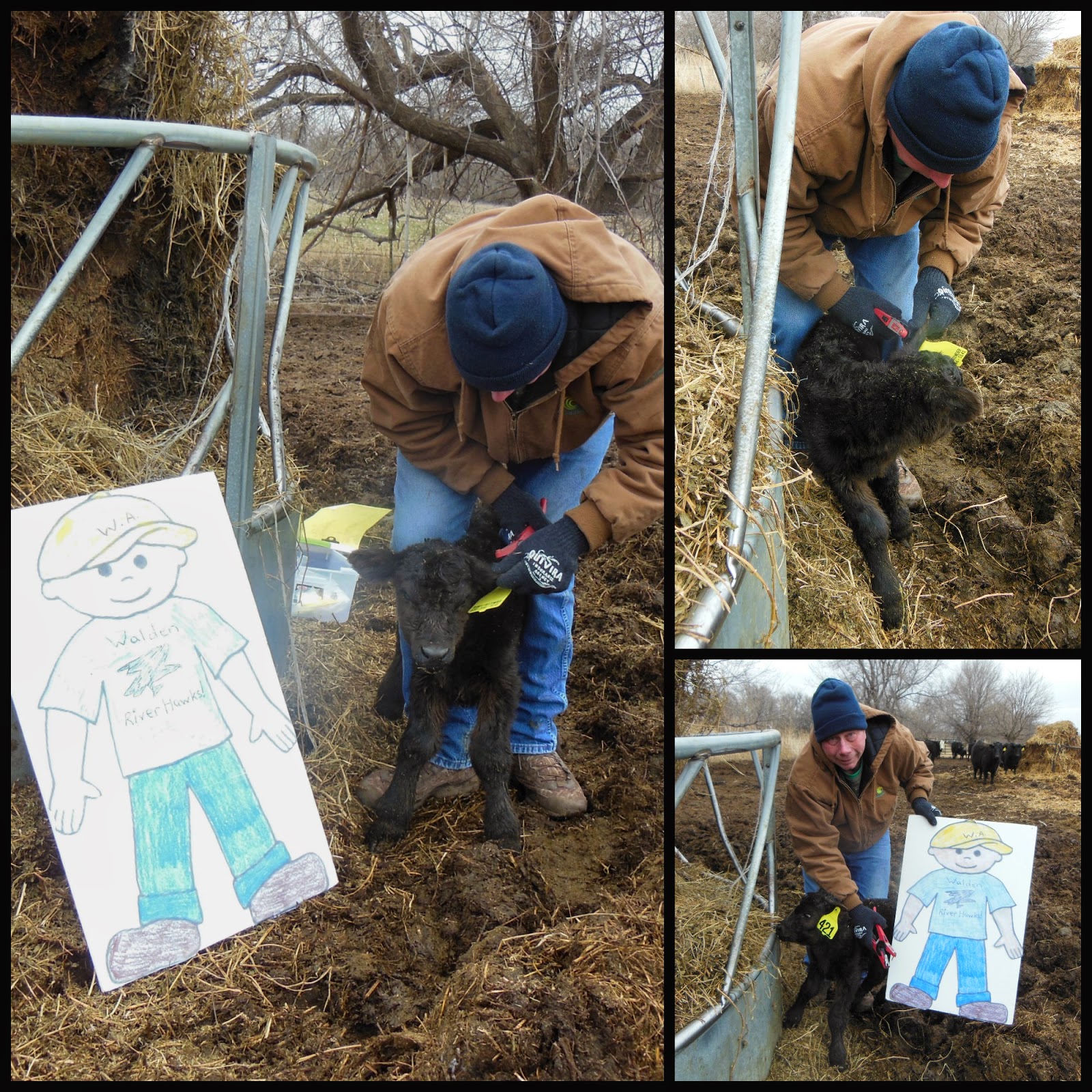 The ear tagger is kind of like a giant ear piercer. Probably some of the fourth grade girls already have pierced ears. Aggie watched as Randy gave that particular calf the 421 tag number. The "4" tells us that the calf was born in 2014 (the last digit of the year). That's how we number our calves. Last year's calves have numbers beginning with "3" and next year's calves will have numbers starting with "5." The "21" meant it was the 21st calf born to a heifer this year.

After the baby got its tag, the mama checked it out and realized it was just fine, despite some interference from those humans who came to the cattle corral. 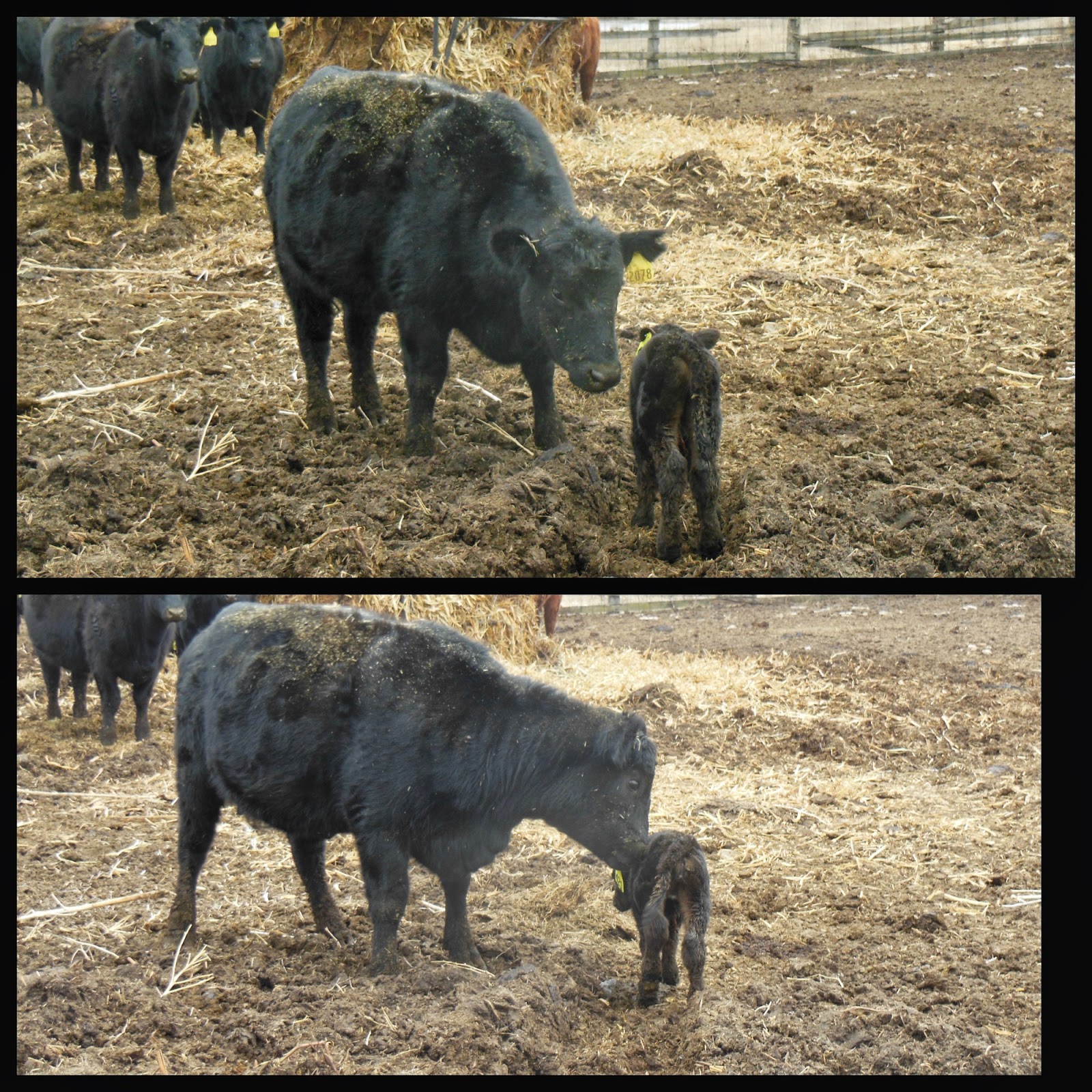 Aggie also helped Randy and I as we checked cattle in pastures and corrals. One cold day, he found a baby calf taking a nap in the grasses at the pasture, which sheltered the calf from the cold. 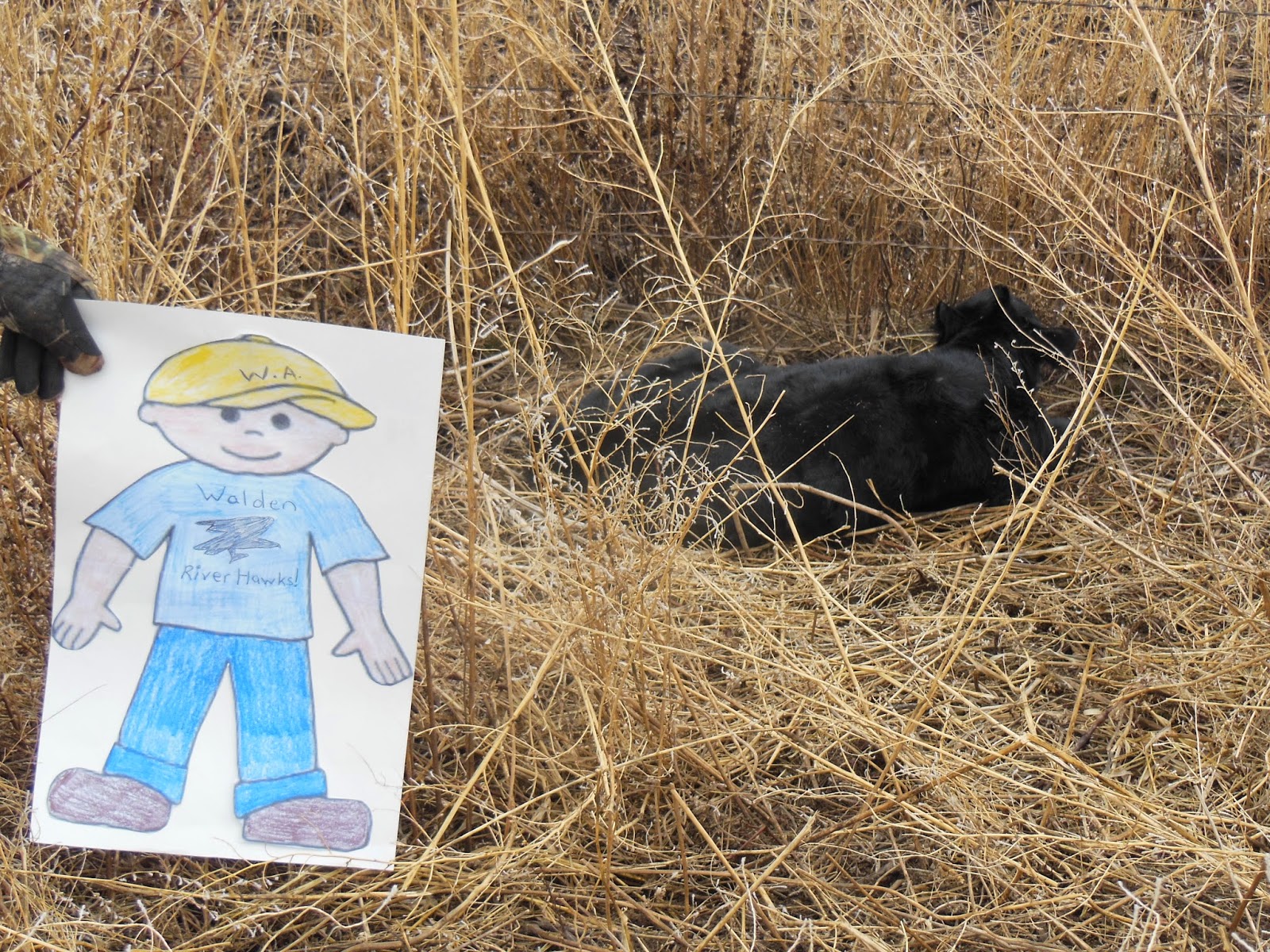 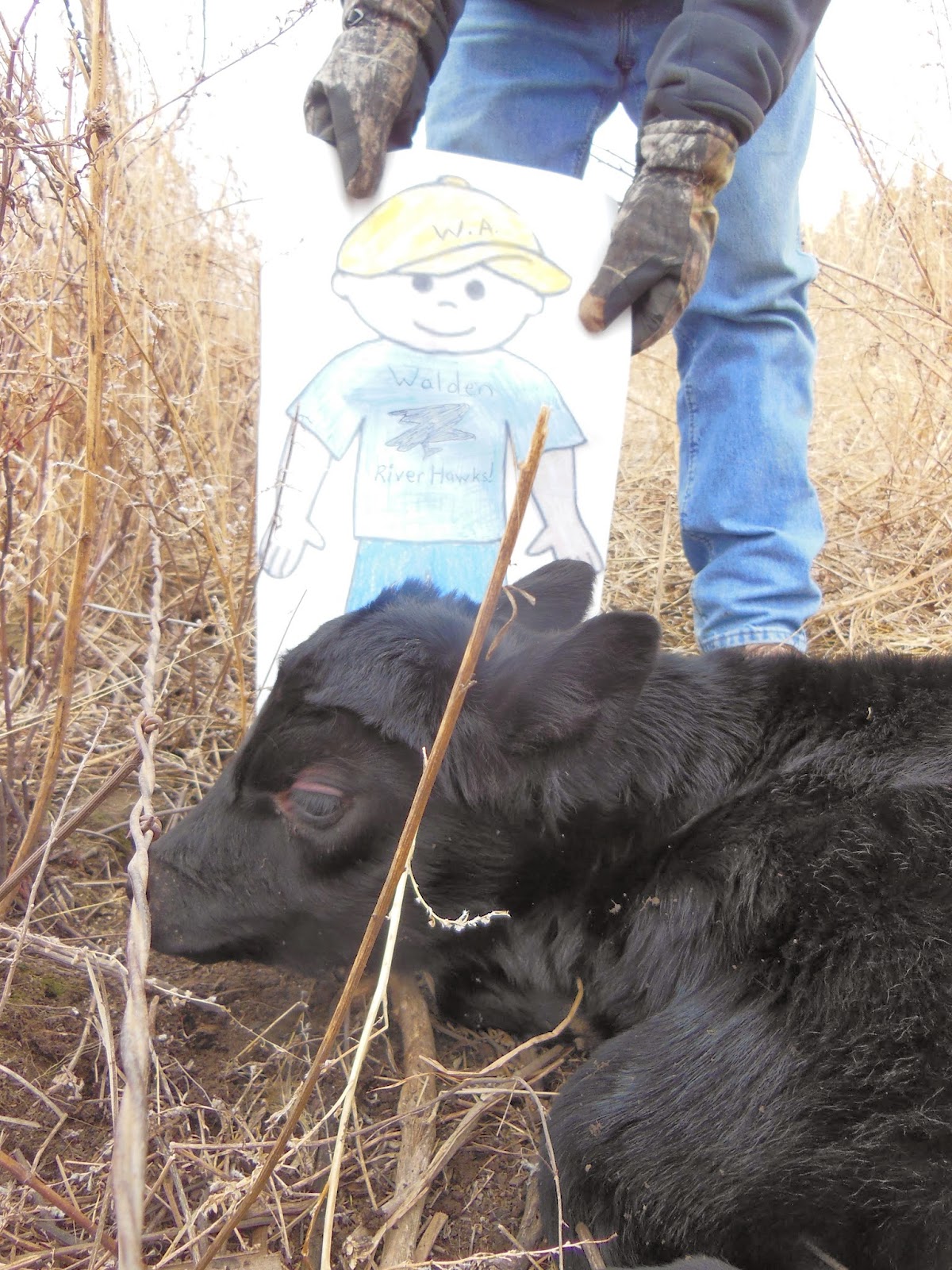 We hope Aggie liked seeing the cute babies just as much as we do. 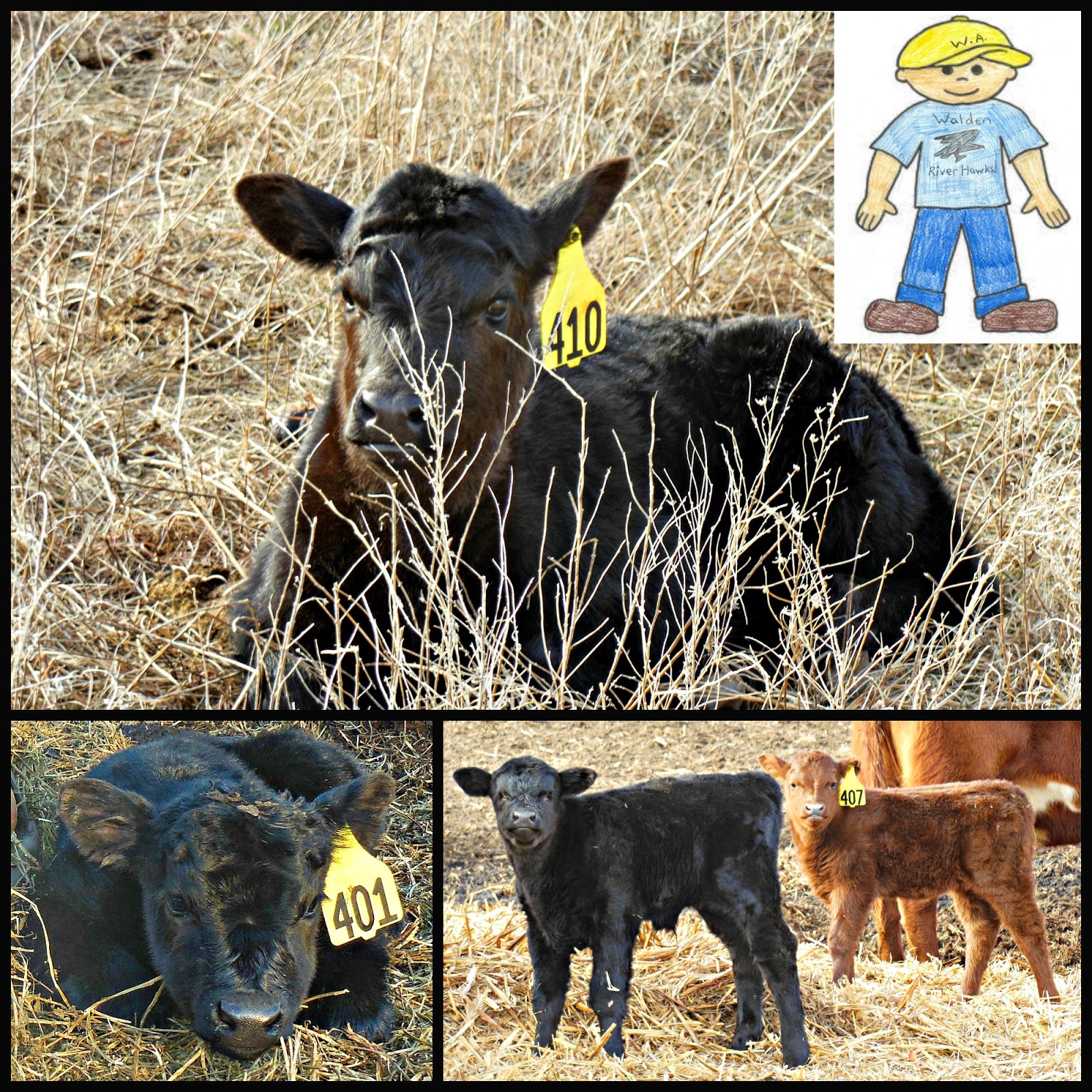