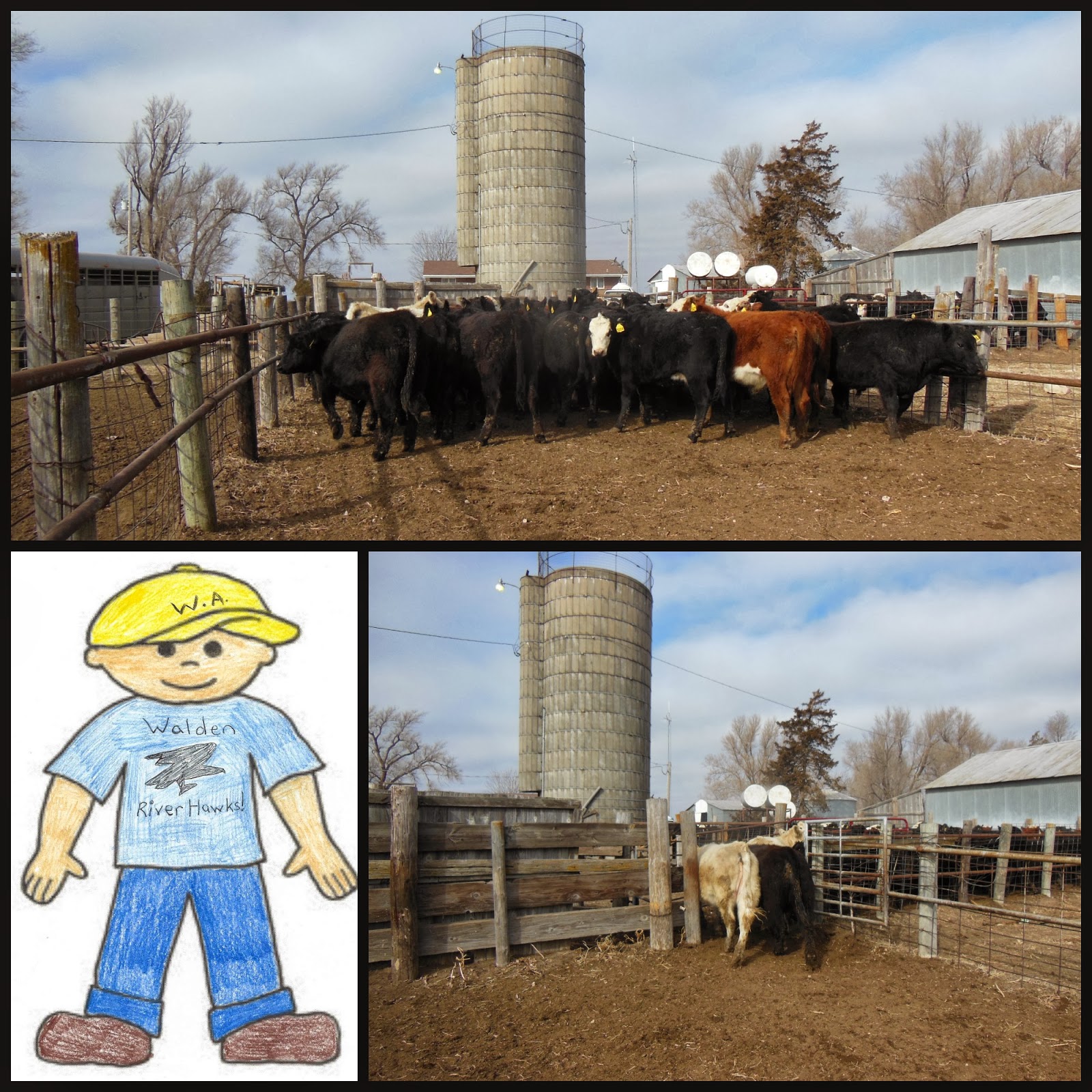 When guests come to the farm during a busy time, there's no time for chitchat. Back when I was a child, I remember when my Aunt Merlene and Uncle Dick sometimes would come for wheat harvest. They'd pull into Grandma and Grandpa Neelly's drive with their station wagon packed tight with my six cousins. But we couldn't just sit around on Grandma's turquoise-flowered couch. We were busy, so at least part of them went to the harvest field, too.

Flat Aggie has been visiting us for several weeks now. Since we've been busy with cattle, we've had to put him to work. But, with all that's been going on, I'm a little behind when it comes to blog posts.

Two weeks ago, Aggie helped us gather the feeder cattle. These are cattle that were born last winter here on the County Line, so they are about a year old. Last summer, they were in a pasture with their mothers. Then, this fall, we weaned them from their mamas.

Weaning means that they no longer get milk from their moms. Instead, we feed them grain, silage and alfalfa hay.
It's hard to take photos of rounding up cattle. That's especially true when four go crashing through a fence and don't go where they are supposed to go. So, I didn't get any photos of that part.

But, after we got all the feeder cattle gathered, we put them in a pen to sort them. We needed to sort the heifers - the girl calves - from the steers - the boy calves. Randy planned to keep 25 heifers and will put them with bulls later in April so that they will get pregnant and have their own baby calves next winter. 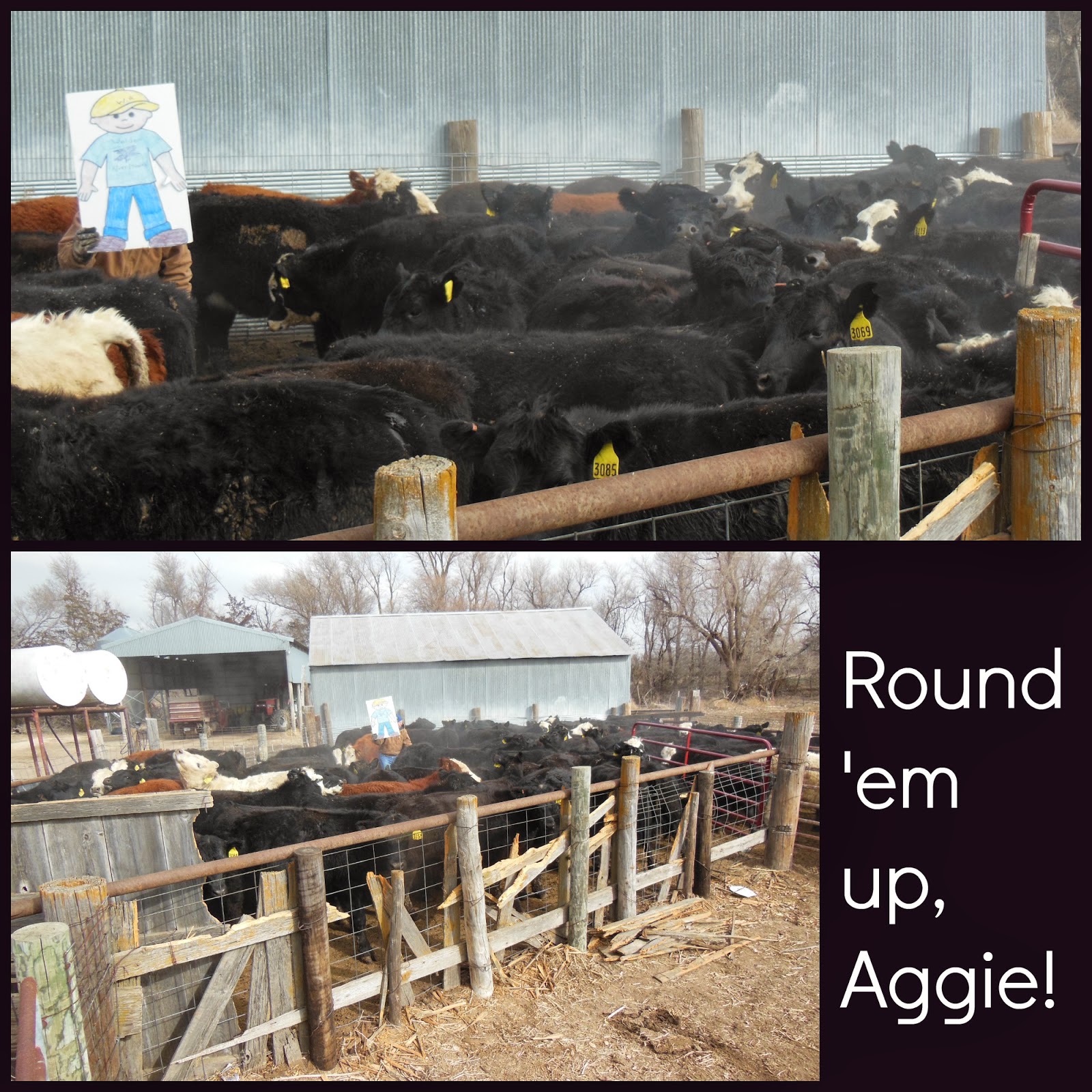 Last fall, we had a veterinarian come and give vaccinations to the calves. As they went through the chute, Randy decided whether they were heifers that he'd potentially want to add to our own herd. If he did, the doctor gave it a brucellosis vaccination, plus a tattoo and a red eartag on the left ear to show it had received it. This vaccination is important for the health of both mamas and their babies.
So, as Randy and I were sorting, we were looking for the red tags in cattle that were milling around. The calves all have their winter coats, so it's not too easy to find the little red tags at a glance. Again, it's not a good time to take photos, so I don't have any of that process. Sorry Aggie, but we wouldn't want you to get hurt!

We ended up with 50 heifers and 48 steers. Randy and I sorted, while Jake ran the gate in case a calf got by us that we wanted to keep.

We let the steers out into the bigger corral and then sorted the heifers. Since Randy just wanted to keep 25 to breed for our herd, he picked out the ones which had been treated with the bruccellosis vaccine. Then, among those, he chose the ones that he thought had the best characteristics that we want to carry on in our herd. He looked for heifers with a straight back, good muscling, a larger frame size, good feet, a smaller head and a feminine look. 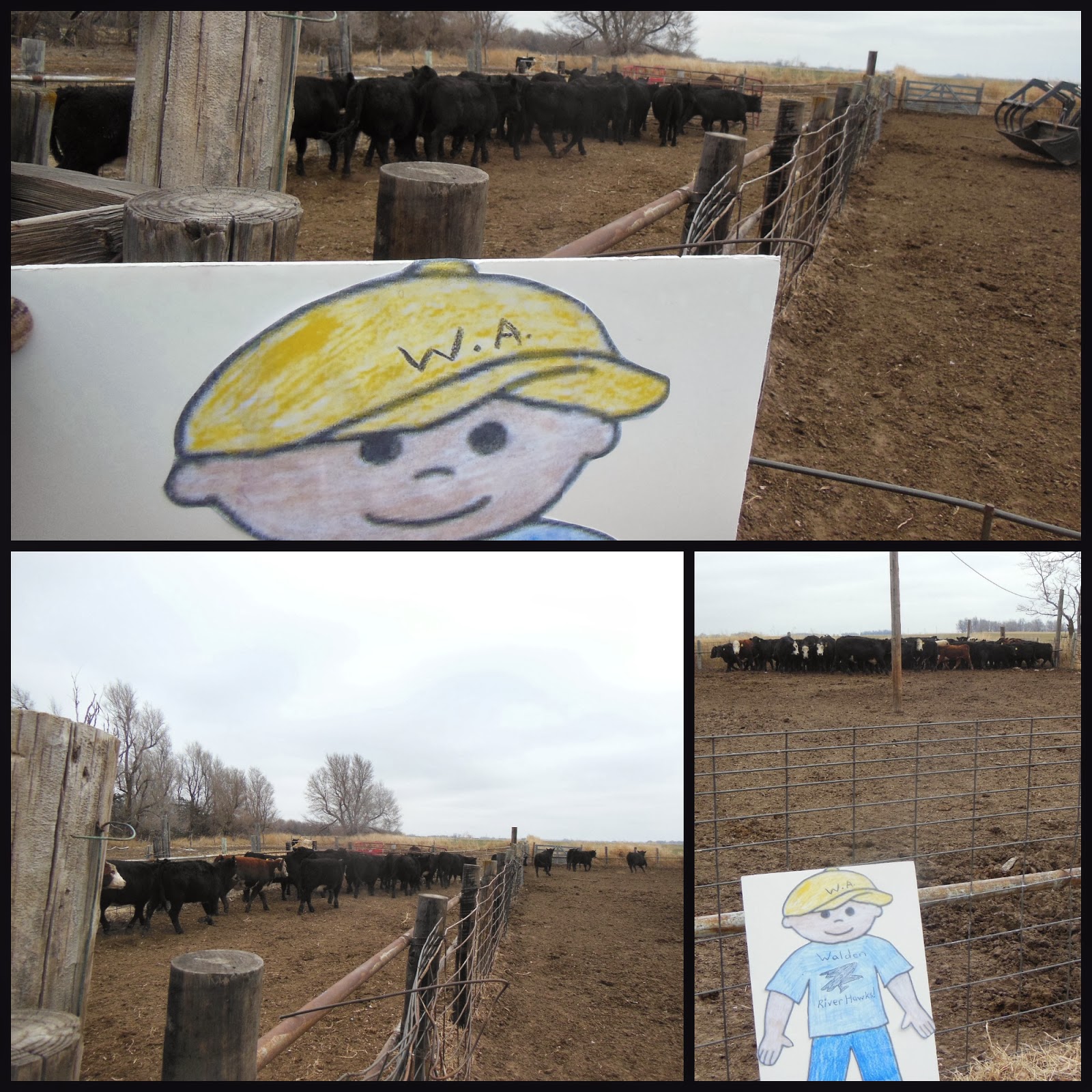 We put the heifers and the steers that were going to the cattle sale in a separate pen. Then Aggie helped us open the gates, and we let the remaining 25 heifers back into the pasture. When we take cattle to summer pastures, they will go, too.

The next day, the semi truck arrived to haul the cattle to the sale barn. 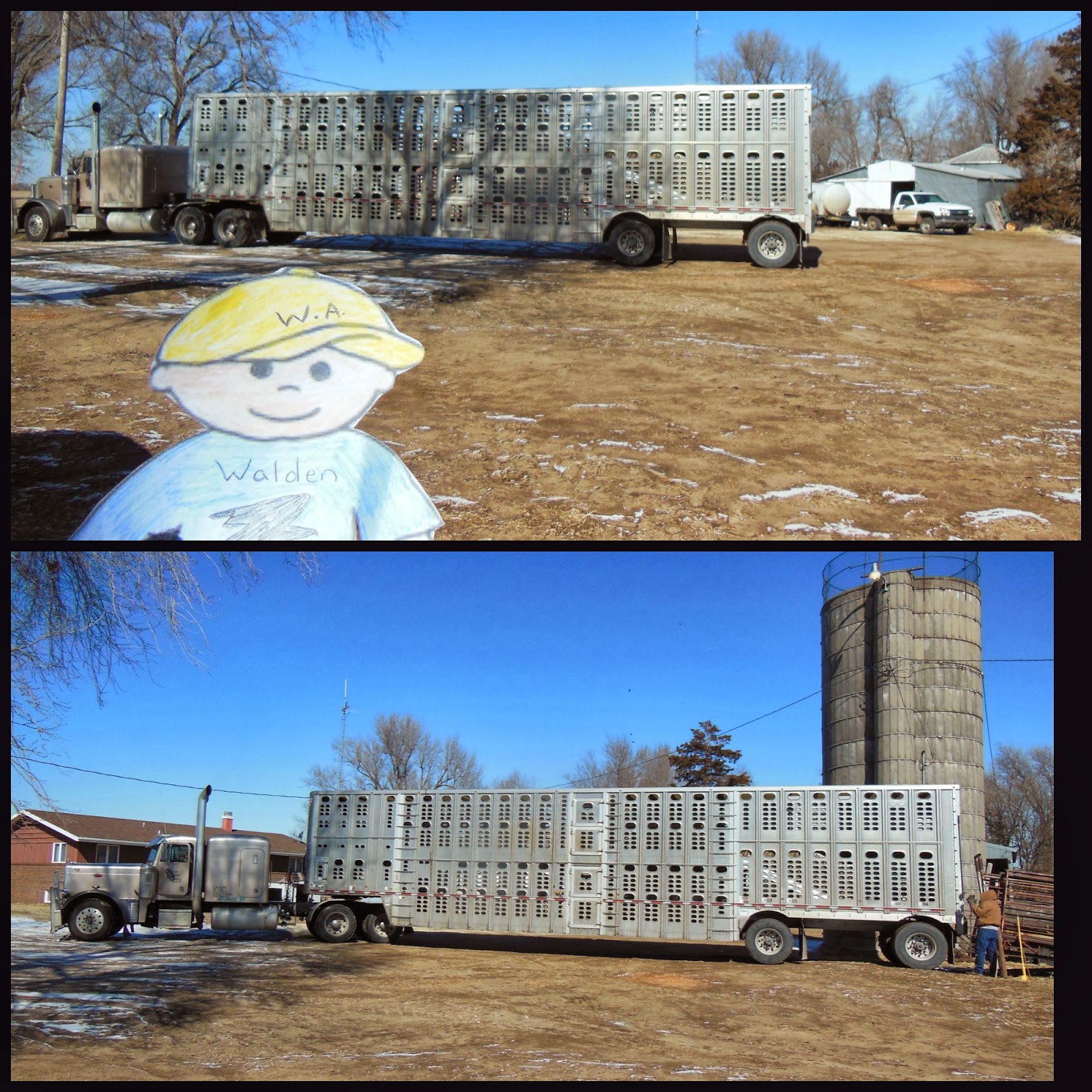 We have two small cattle trailers, but it would require a bunch of trips to haul 98 calves to the sale barn. So we hire Darrel Harner Trucking to bring a semi. Aggie had to look over the big truck. 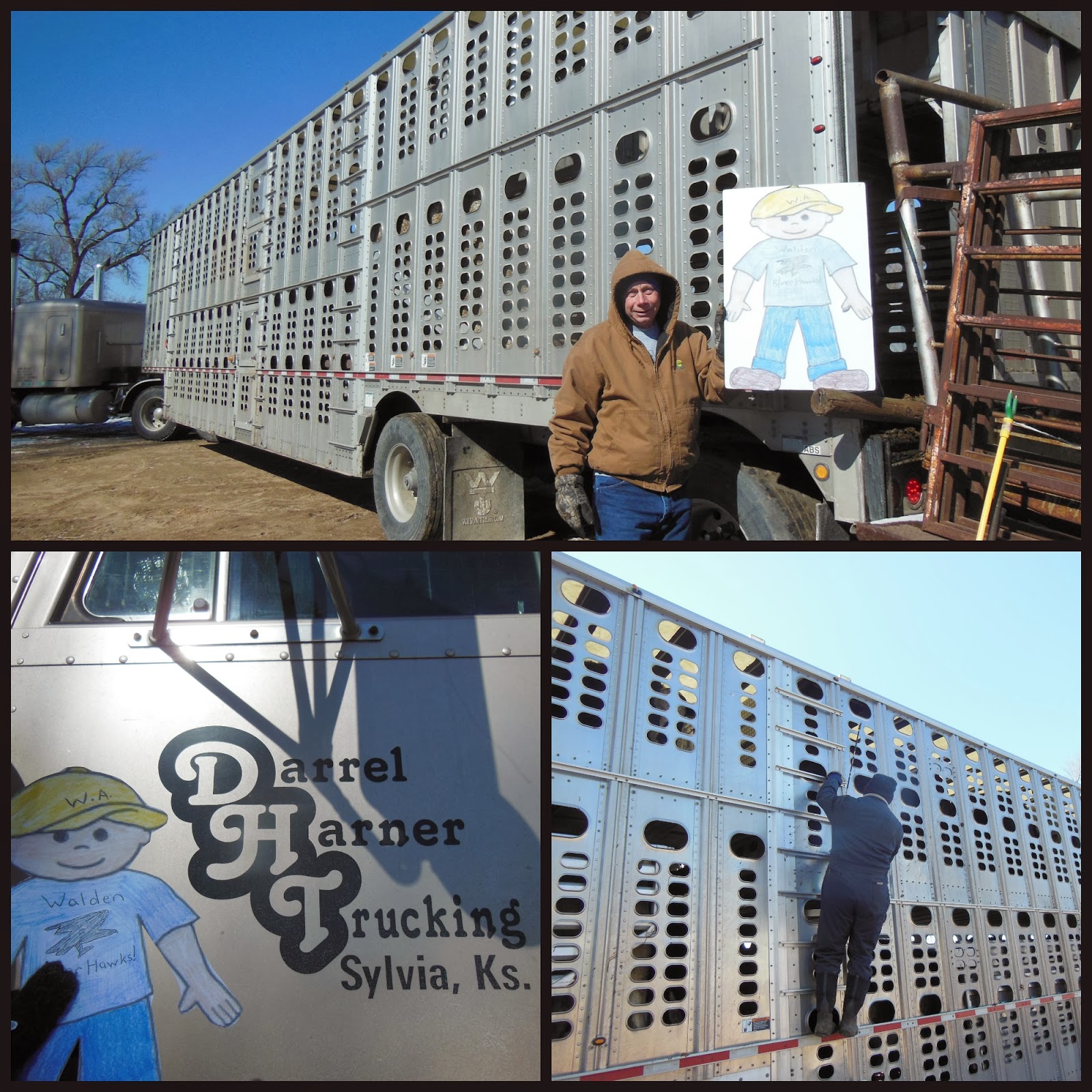 We again put the cattle in a pen, then we moved them into a smaller pen ... 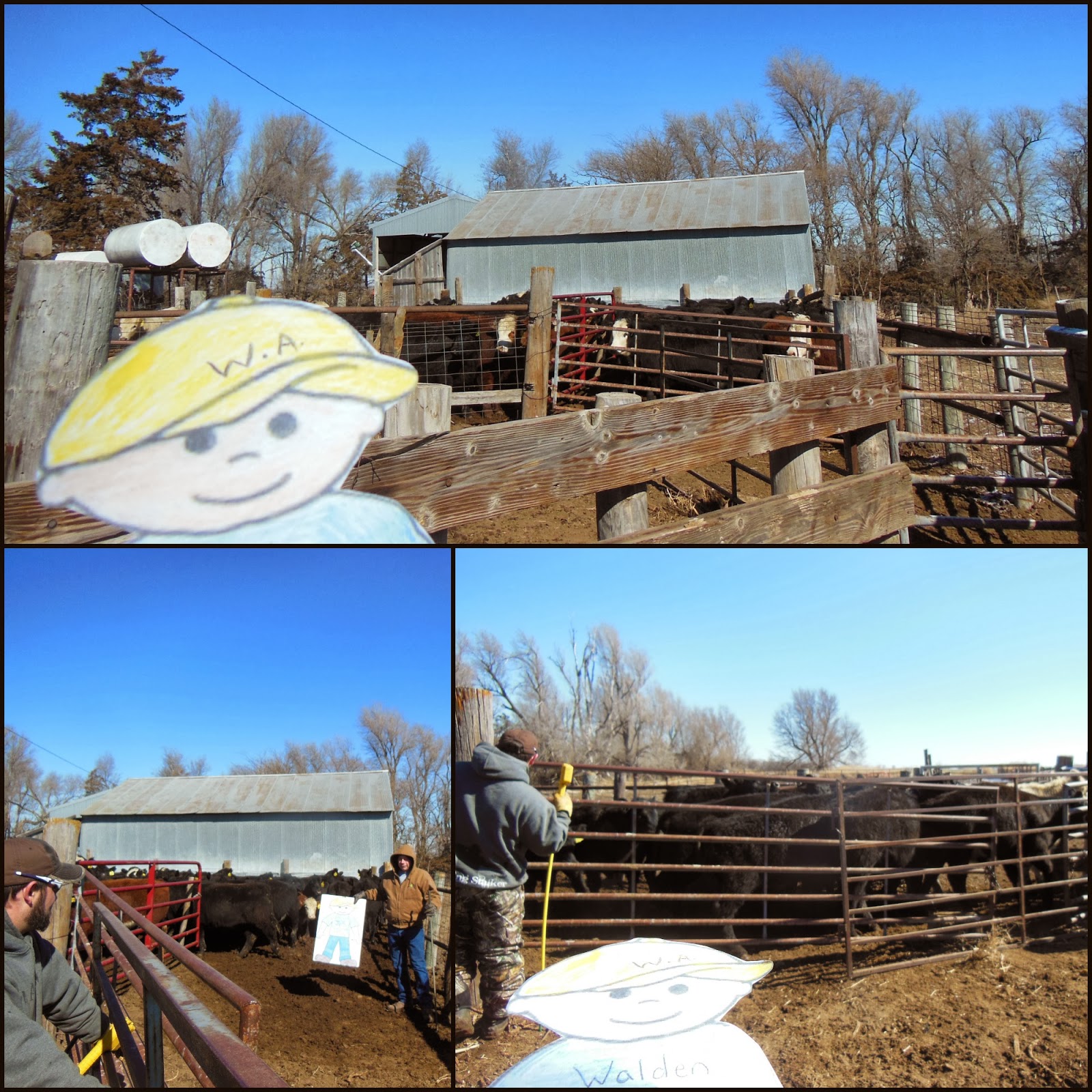 and then they go single file up a loading chute and into the semi. The semi is divided into different compartments, which can hold anywhere from six head to 25 head of cattle. Darrel would tell us how many he wanted at a time, and we'd send that many into the truck. Each semi can haul about 50,000 pounds. 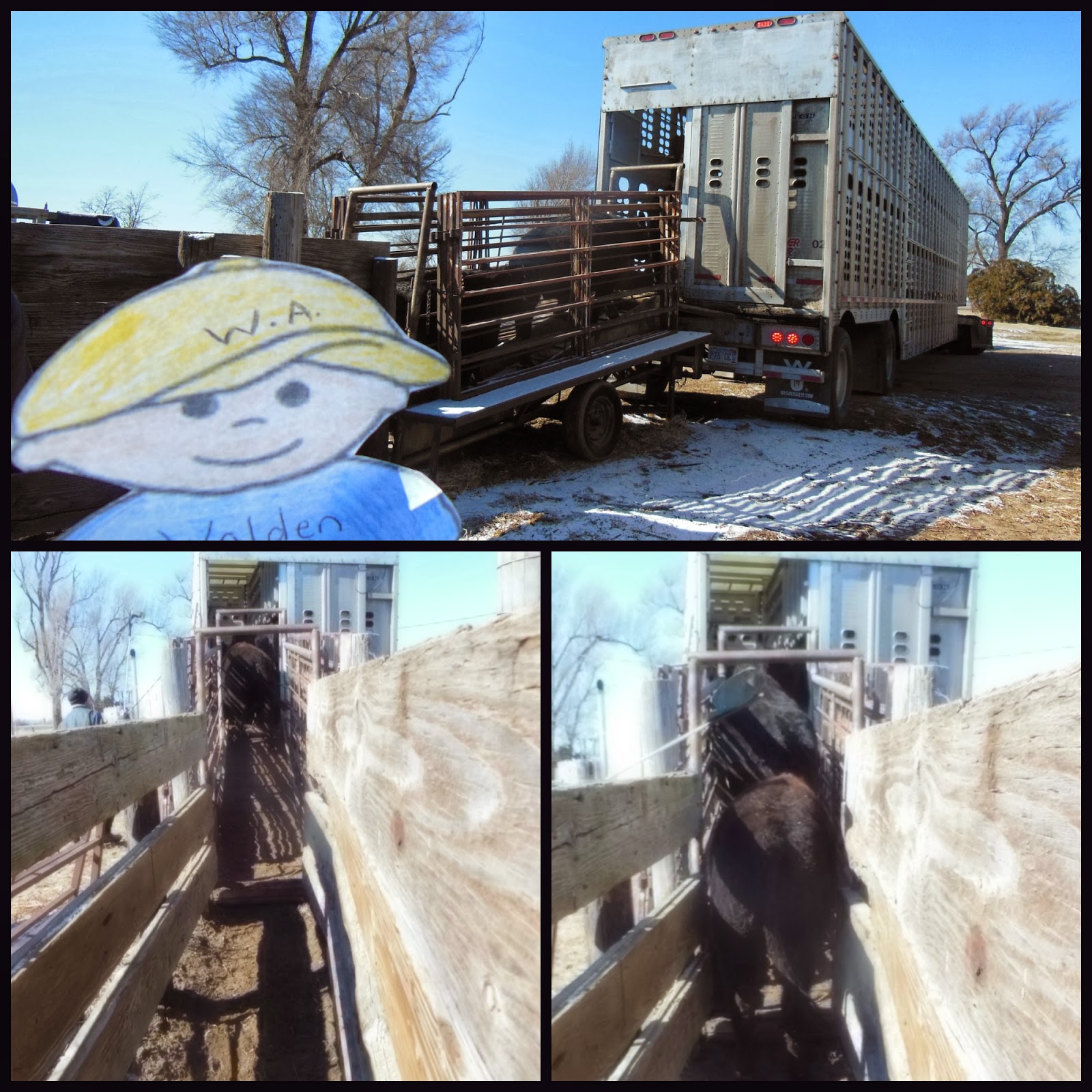 After they were all loaded, Aggie and I watched as the semi pulled out of the driveway and headed to the sale barn in Pratt. 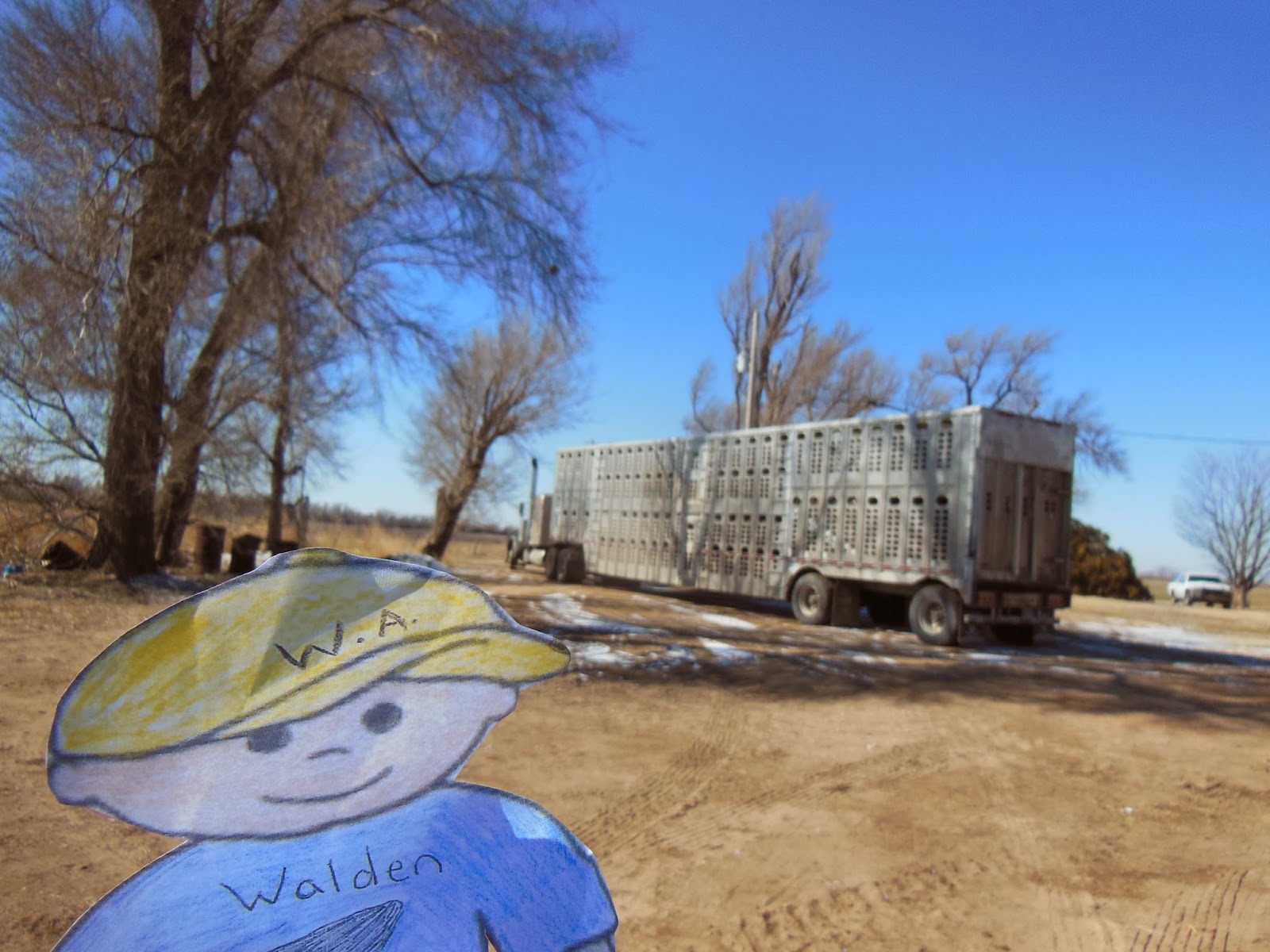 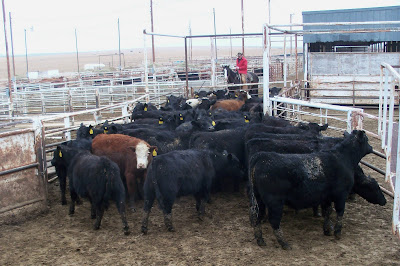 Tomorrow, Flat Aggie and I will tell about our adventures during the cattle sale.
Posted by Kim at 7:28 AM