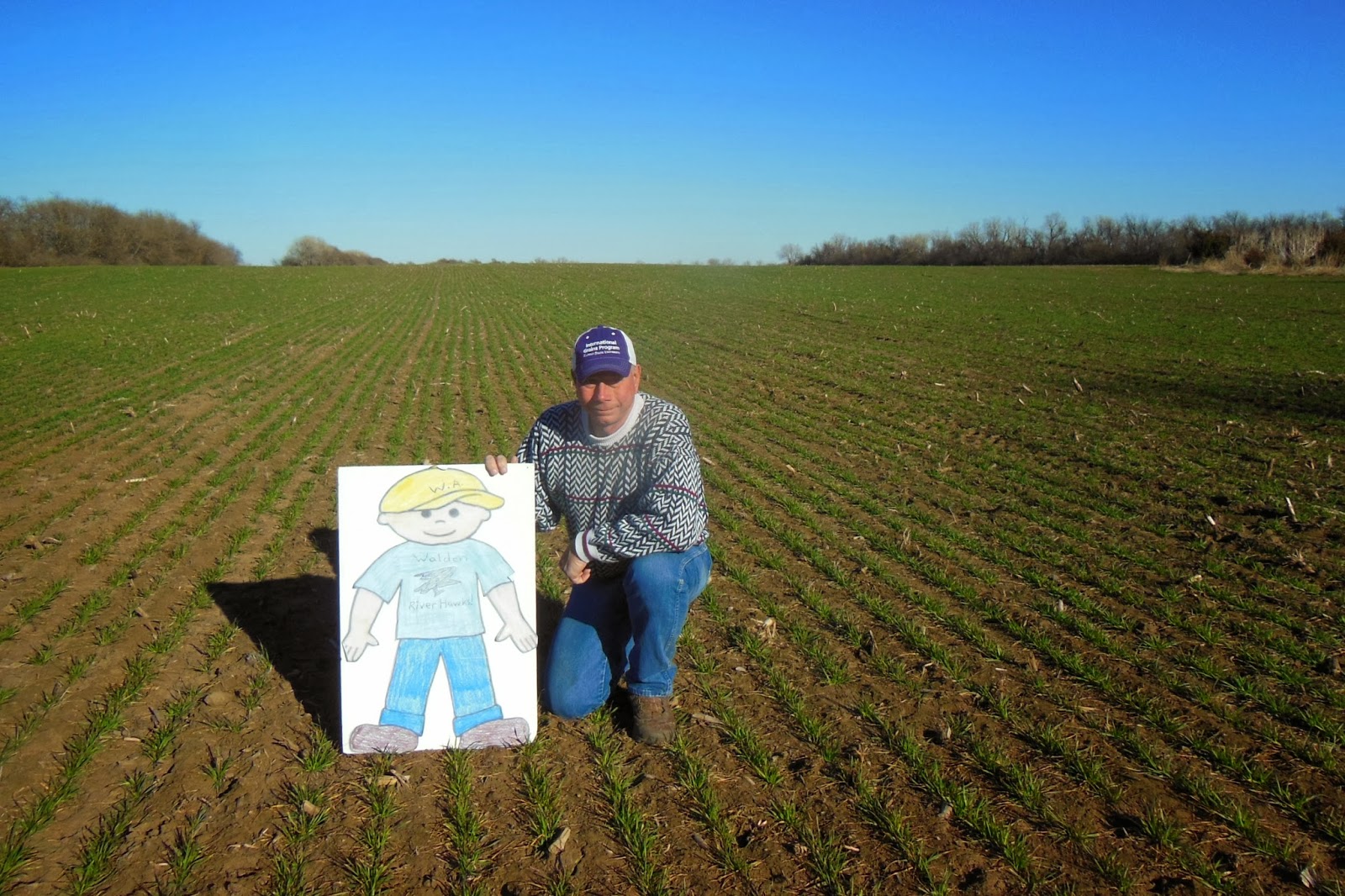 Wheat is the major crop here on our farm in South Central Kansas. So, you'd think that Aggie would have had lots to do to help us with this important crop.

It's not only important to us, but it's important to Kansas agriculture. On average, Kansas is the largest wheat producing state, with nearly 1/5 of the nation's wheat grown here. All the wheat grown in Kansas in a single year would fit in a train stretching from western Kansas to the Atlantic Ocean. 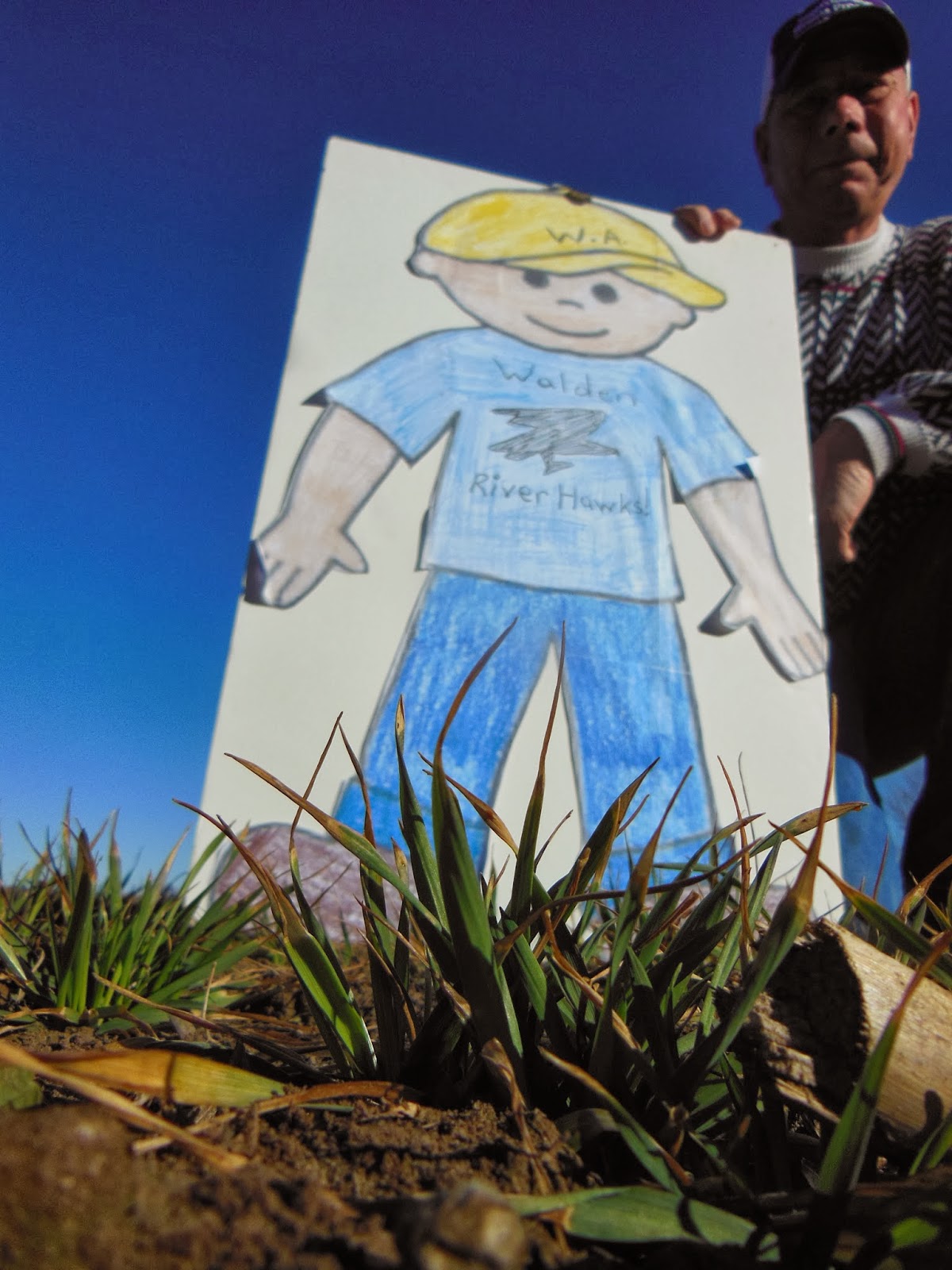 However, at this time of year, about the only thing to do with wheat is to watch it grow. Since Aggie arrived when we were experiencing sub-zero wind chills, the wheat was still in the dormant stage. But, as the weather warms a bit, the wheat is starting to green up and grow.

We planted a little more than 1,400 acres to wheat last fall during a time frame from September 23 to October 9.
Here in Central Kansas, we plant what is called hard red winter wheat. It's planted in the fall and then goes dormant during the cold months of winter before coming out of its "hibernation" and growing again in the spring. It is then usually harvested in June.

Here's what the wheat looks like as it emerges in the fields. 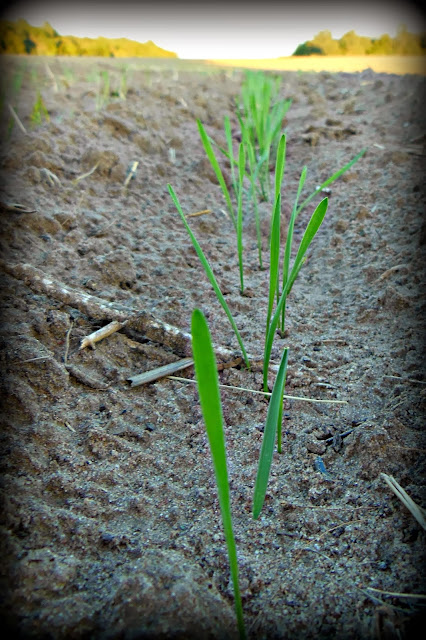 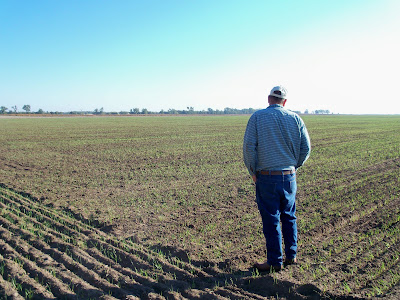 This month, the co-op sprayed our wheat field with nitrogen fertilizer. (I missed the actual spraying because I was at school during that time, so this is a photo from 2010. I didn't show Aggie in person, but we still thought it was important to show you Walden Academy students! 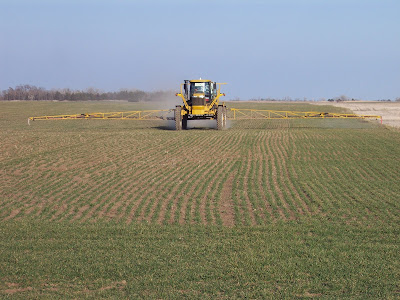 Snow during the winter months doesn't hurt the wheat at all. In fact, the moisture helps it. 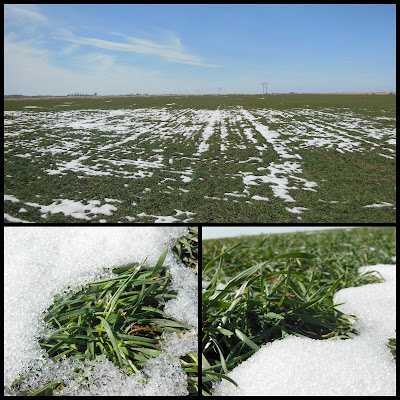 However, last spring, we had several late season ice and snow storms in April and even in May. A freeze on wheat can impact the yield, or the amount of wheat we raise. At the time, I said it looked like a slushy machine had exploded on our wheat fields. Thankfully and miraculously, it didn't ultimately affect the size or quality of the crop.
As the weather gets warmer, the wheat plant begins growing and gets taller. 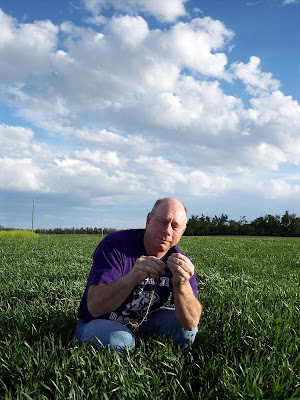 A little later, the wheat head emerges from the plant. 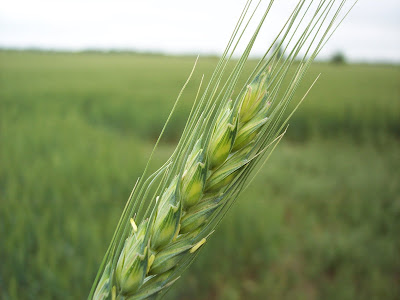 We usually harvest in mid to late June and sometimes into early July. We can begin harvest when the wheat fields turn golden in color and the wheat kernels dry out. 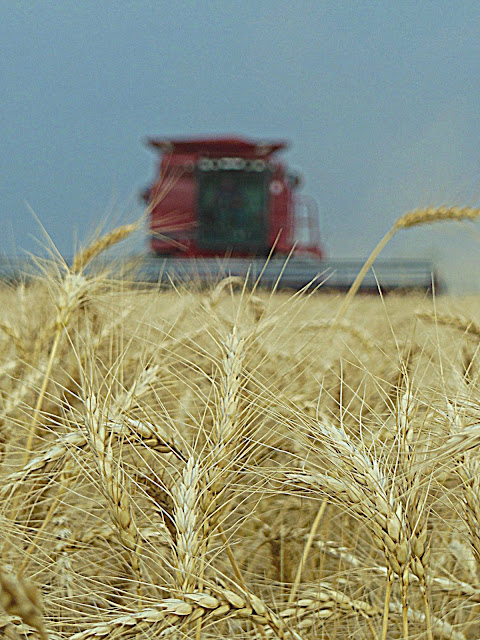 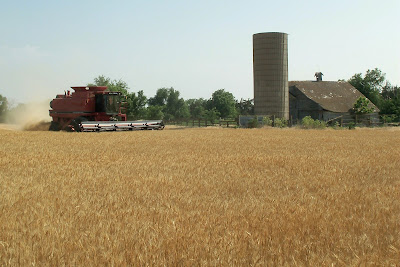 The combine separates the wheat kernels from the straw. We then use the combine auger to put it into the trucks. 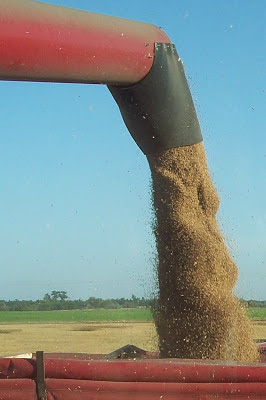 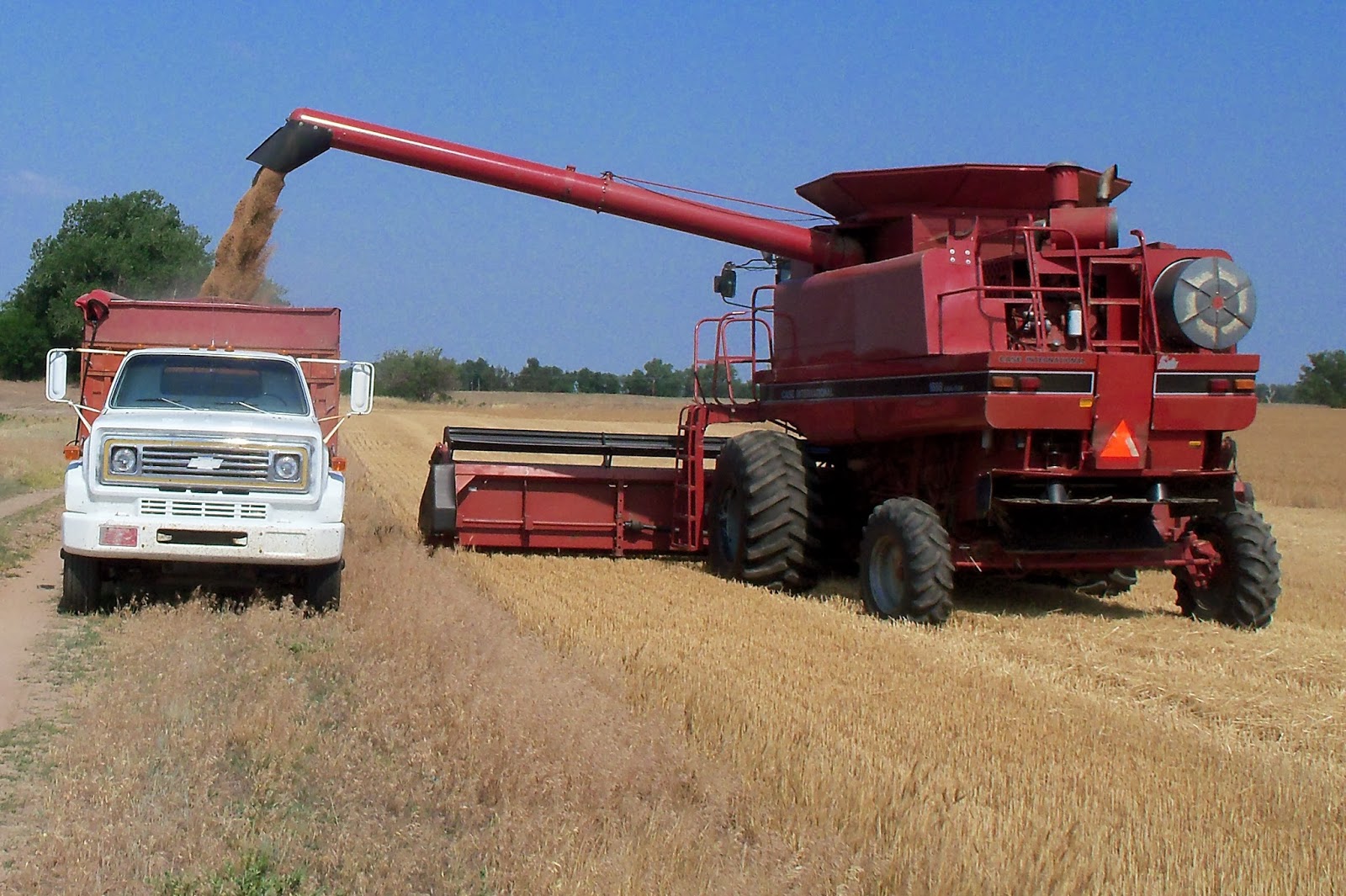 Once the truck is full, we haul the grain to a co-op elevator. When we arrive at the co-op, we pull on the scales so both we and the co-op know how much grain we have delivered. They use a probe to get a sample of the wheat to test it for moisture and test weight, a mark of quality. (You can see the probe on the orange arm hovering over the truck in the photo below.) 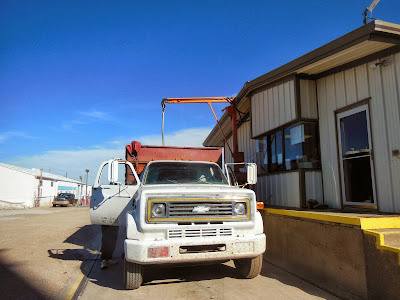 Then we dump the grain out of the truck with a hydraulic bed lift. 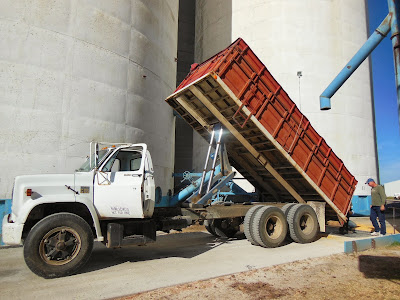 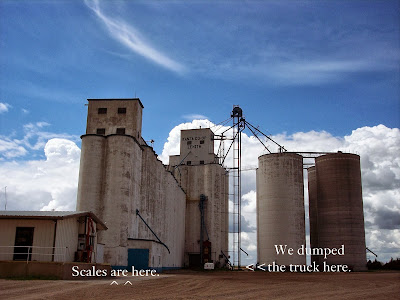 Here's a close-up of the wheat kernels and a copy of the postcards that Aggie and I packed and sent to my fourth grade friends. 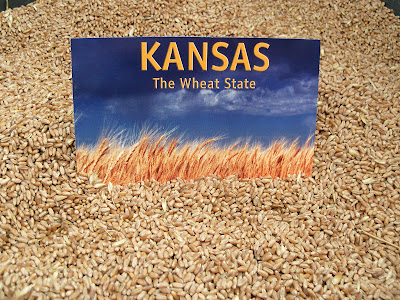 A farmer doesn't have an 8 to 5 job. During wheat harvest, we often cut long after the sun has set. 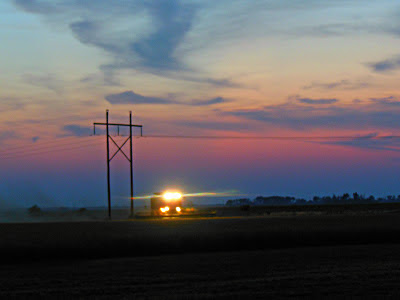 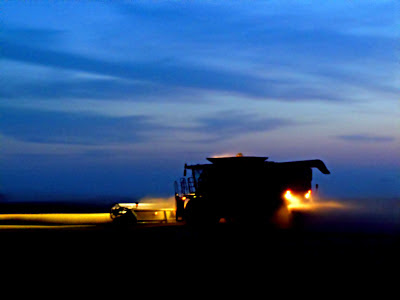 Want to keep up with the Flat Aggies who are visiting farms and ranches across the U.S.? Like Flat Aggie on Facebook. Thanks again to Nicole of Tales of a Kansas Farm Mom who arranges these visits.


***
In case you've missed the introduction to Flat Aggie
Our buddy, Flat Aggie, is from Miss Holbrook's fourth grade classroom at Walden Academy in Willows, California. Flat Aggie is a project of my southeast Kansas blog friend, Nicole, and her Tales of a Kansas Farm Mom blog. Flat Aggie goes to farms all across the country to learn about agriculture. Aggie then reports back to the class with a letter (or blog posts) from the farm. Randy and I have been taking Aggie with us when we check cattle and do other things on the farm. We have enjoyed hosting him and helping him learn about life on a South Central Kansas farm.


***
Today, I'm linked to Tales of a Kansas Farm Mom's Country Fair Blog Party. Click on the link to read other blog posts from the country.
Posted by Kim at 6:58 AM