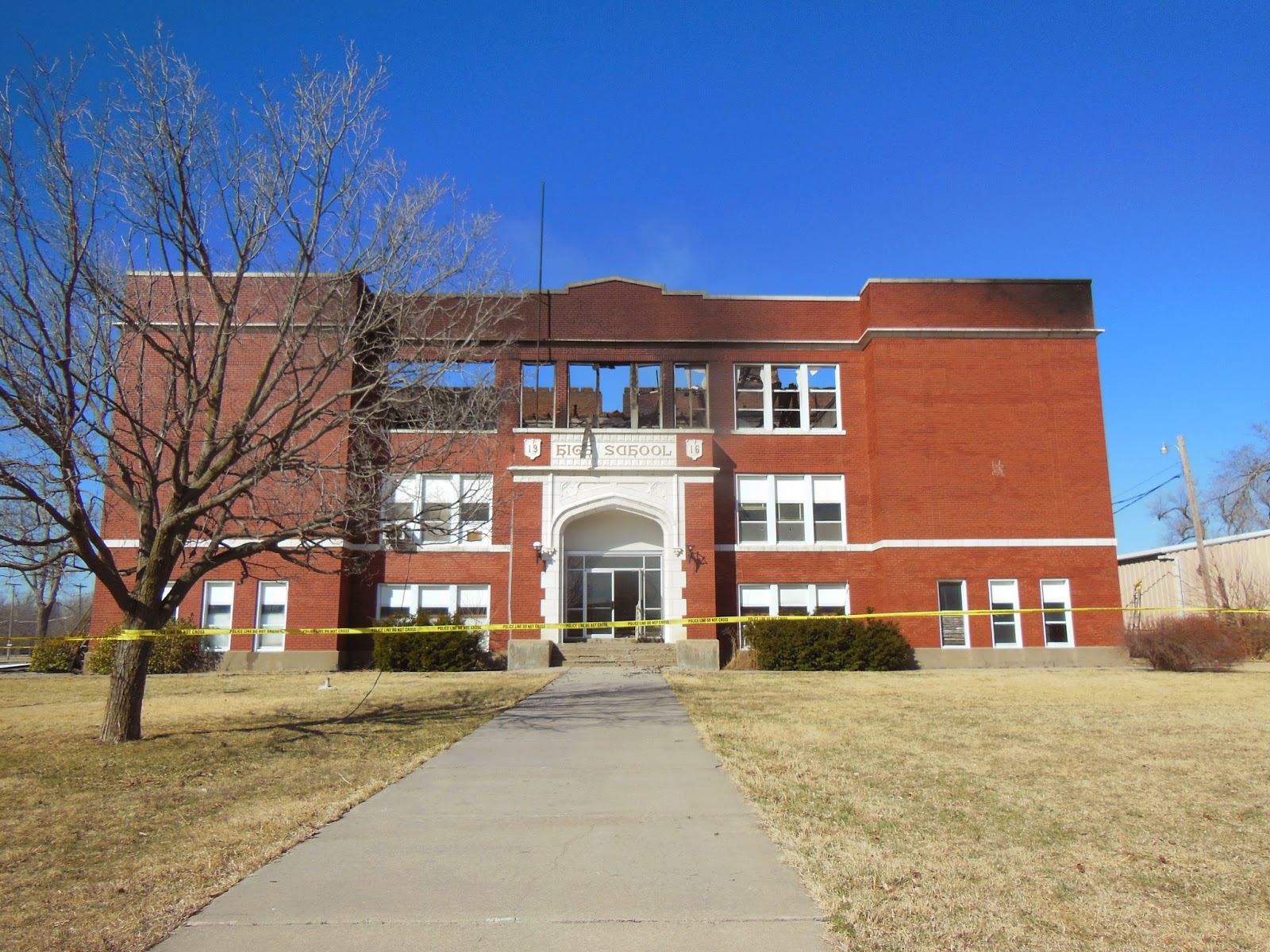 Like the smell of smoke from the still smoldering ruins, the memories cling as tenaciously to our minds as smoke does to cloth. 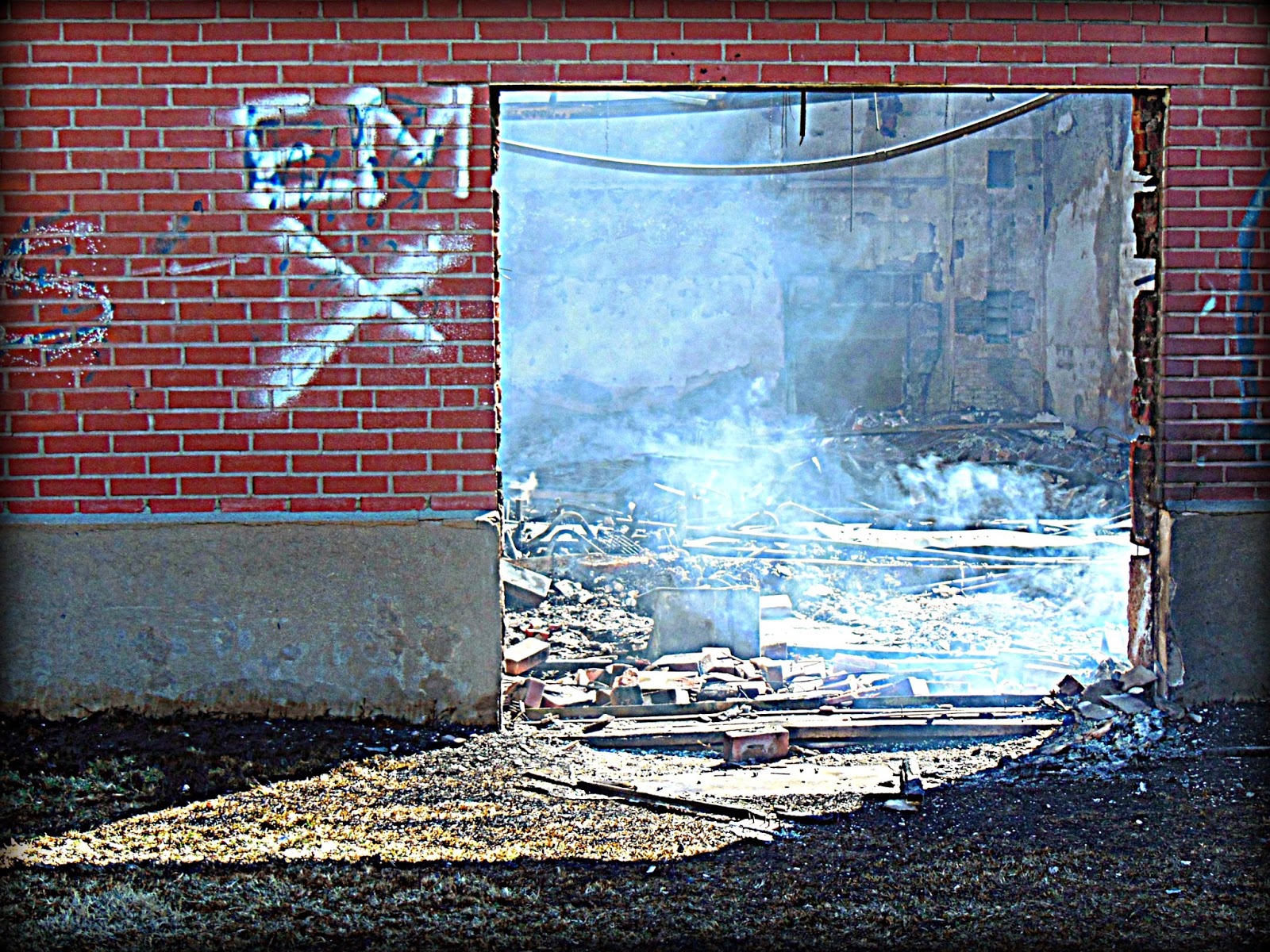 On March 15, the old Stafford High School was destroyed by flames. We had been out of town and didn't know anything about it until Sunday morning, March 16.

The school sat just catty-cornered from the Stafford United Methodist Church. As I stood at the door and greeted people for the Sunday church service March 16, I kept glancing over at the front of the school, the upper floors blackened by soot and wood pieces hanging out of broken windows. When we saw flecks of white in the air, we weren't sure whether they were snow or ash.

After church, we explored, staying behind the yellow crime scene tape. As I looked at the 1916 date on the east doors, I thought about the history there. 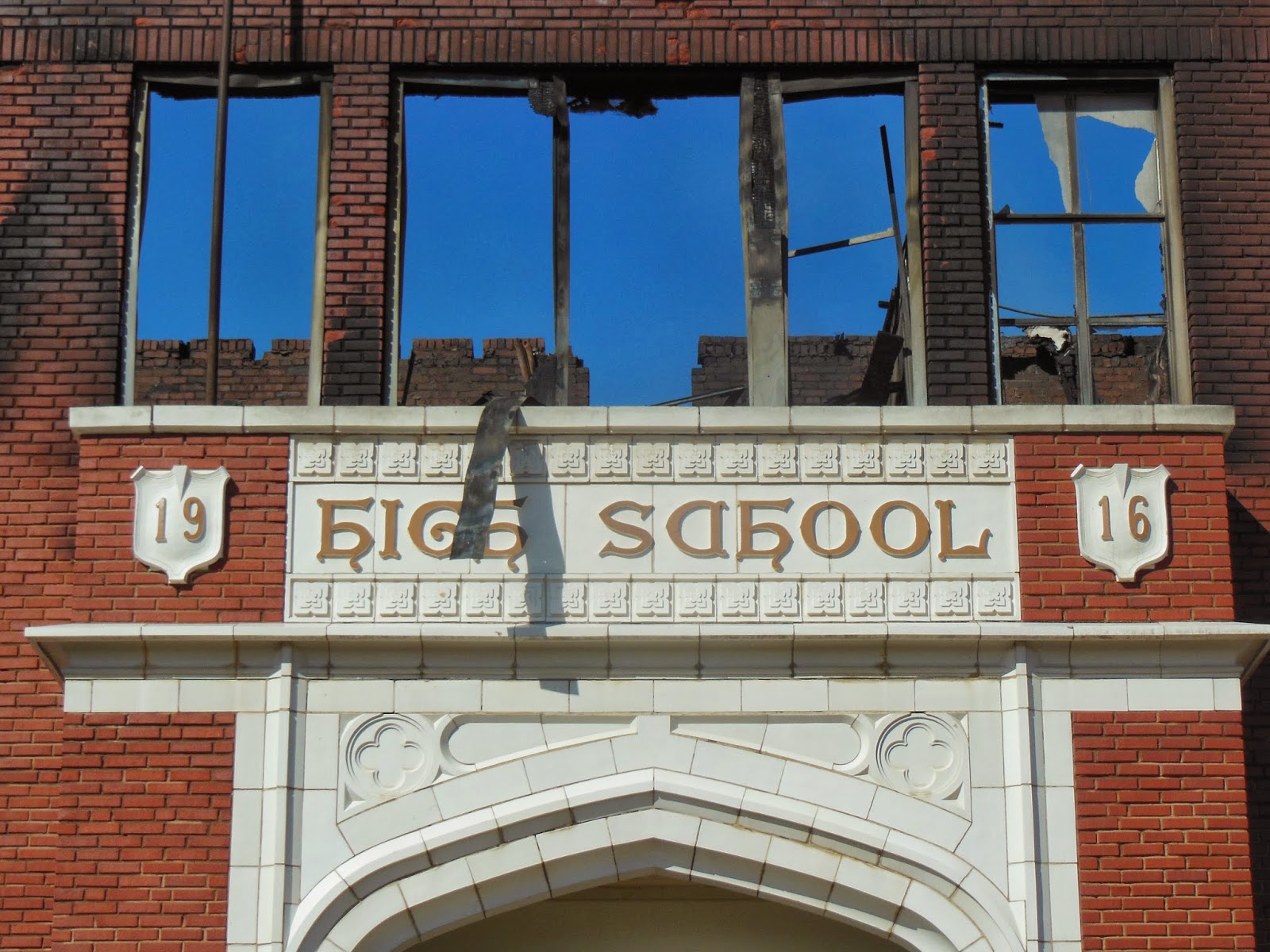 But I was remembering another Sunday morning in December 1998. We had crossed the street after church that day, too. I had been taking photos outside the church, trying for that year's version of our annual photo Christmas card.


But I wanted to mark another event. That Sunday, while Jill and Randy were dressed up, I took some photos of them in front of the school. A move to the new school just down the street to the east on Broadway was planned for February 1999. I wanted some photos of the two members of our family who had walked the halls of the grand old building as students. Randy graduated from Stafford High in 1974. Jill was a 7th grade student at the time, and the middle school attended classes there. (Brent didn't make the photos because he was a 5th grader and was still in the elementary school building.) 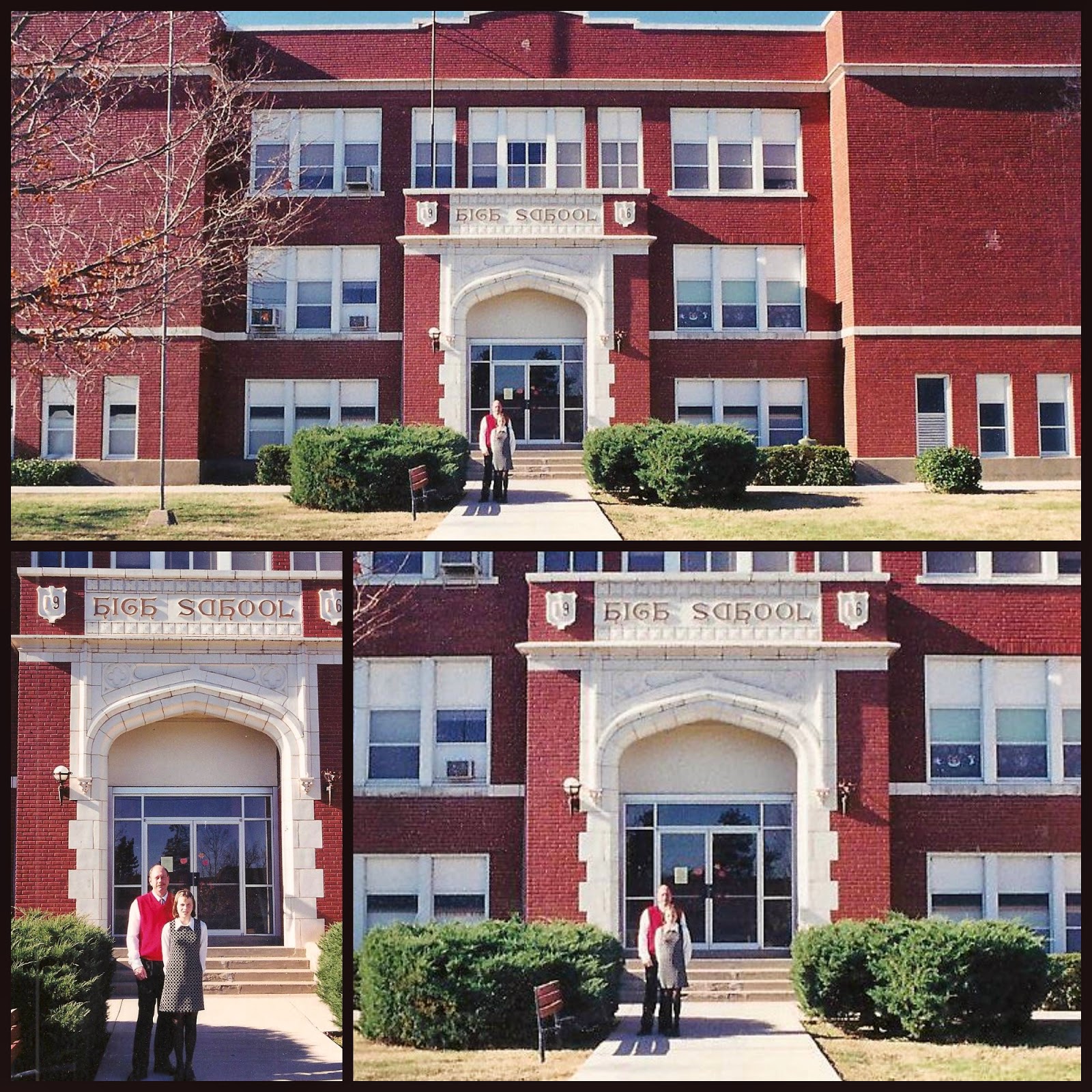 It was a minor miracle that I found the photos in my less-than-organized tubs of photos. 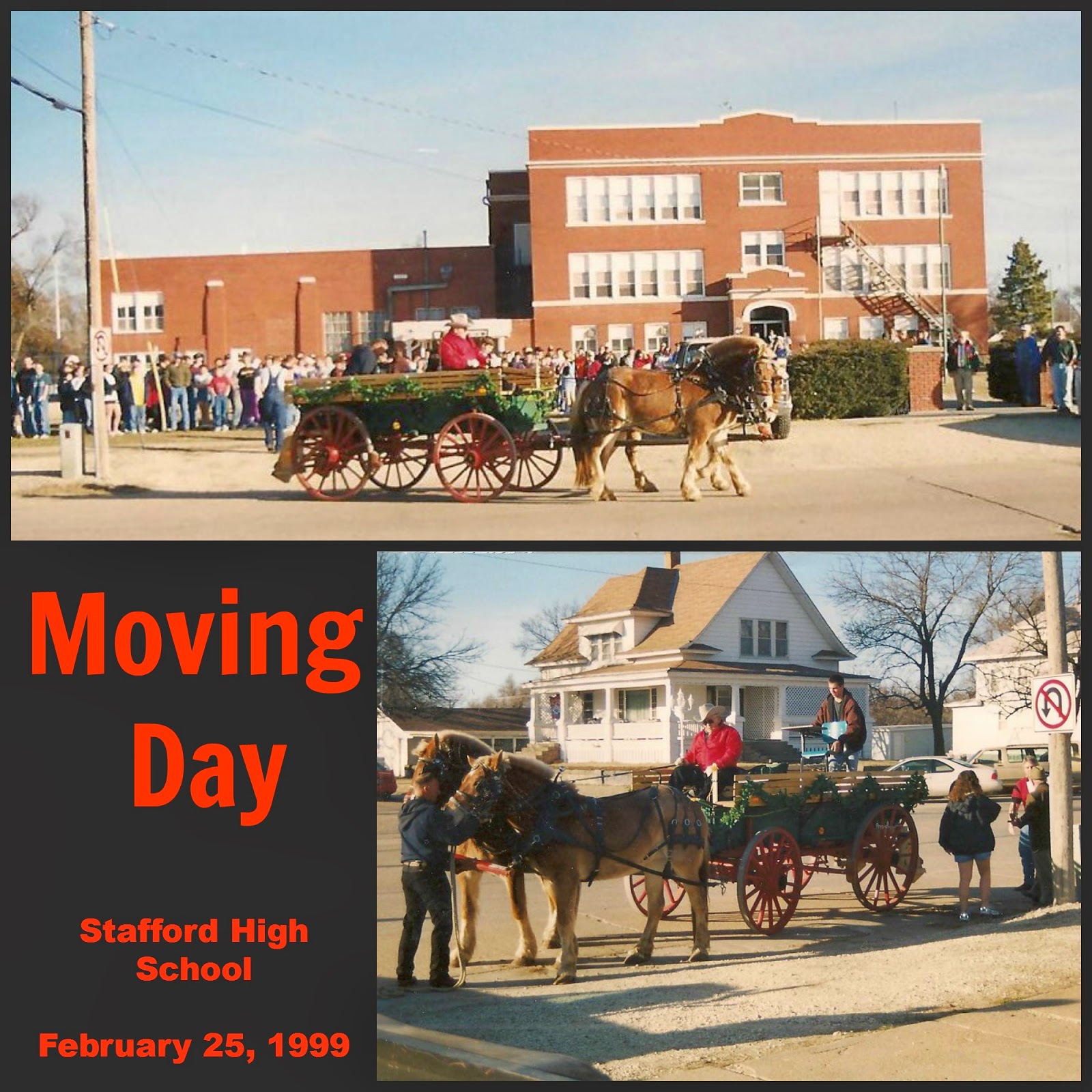 And then there were the photos of moving day, February 25, 1999. Bernard Bartlett carried mementos from the old school to the new one by a horse-drawn buggy.

Earlier, teams of students formed a version of a bucket brigade to transfer supplies from the top floors to the ground floor. They sat in the auditorium and listened to some history. Some of the students then carried desks and trophies to the waiting buggy. 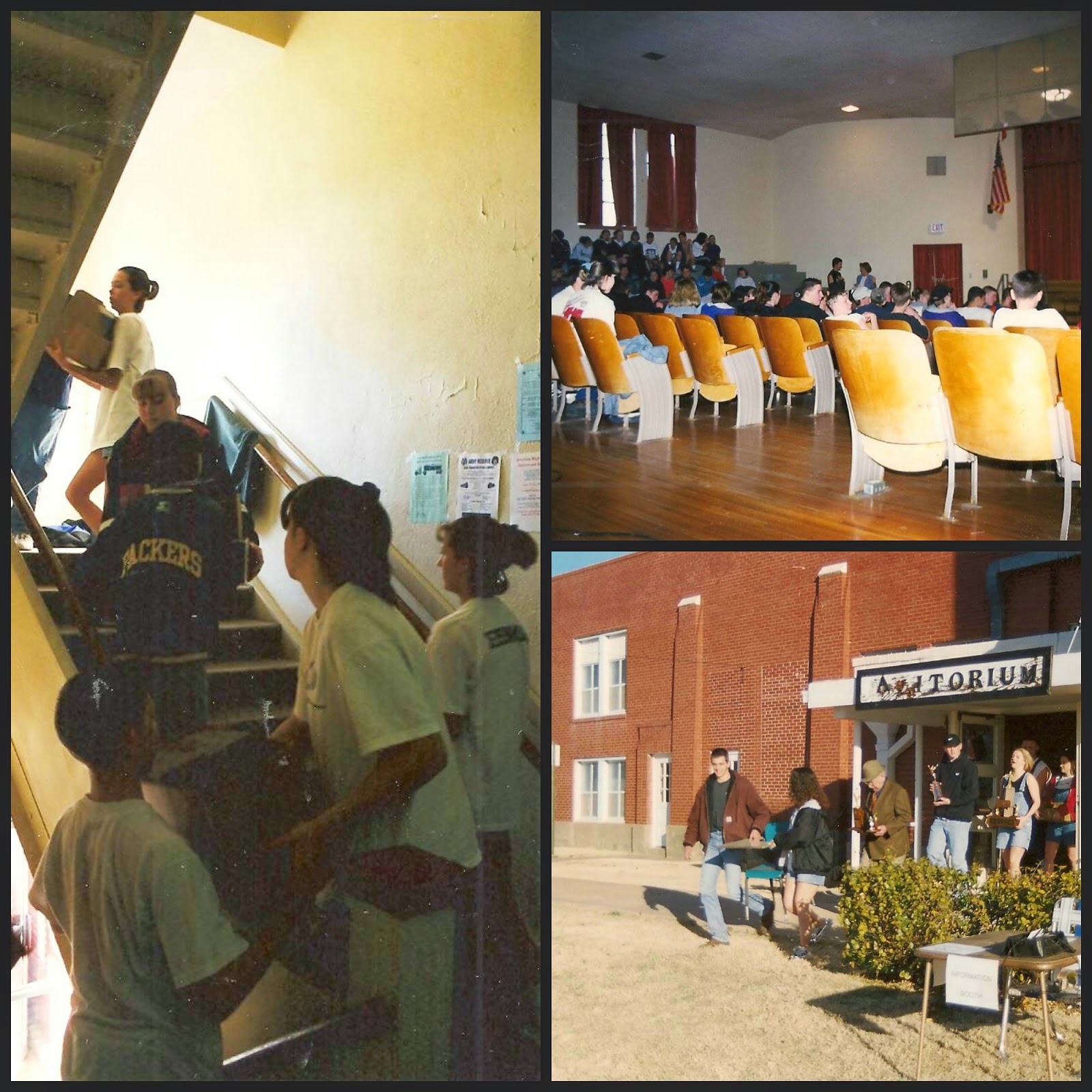 Just as it had for many other families, the school was the centerpiece of the community. Randy's maternal grandmother Laura Russell (Ritts) graduated from there. So did both his paternal grandparents, Clarence Fritzemeier and Ava Hornbaker (Fritzemeier).

His Dad, Melvin Fritzemeier, graduated from SHS in 1948, and his Mom, Marie Ritts, got her diploma two years later. As I dug through tubs looking for old photos, I found a 1948 Staffordonian, the yearbook from Melvin's senior year. 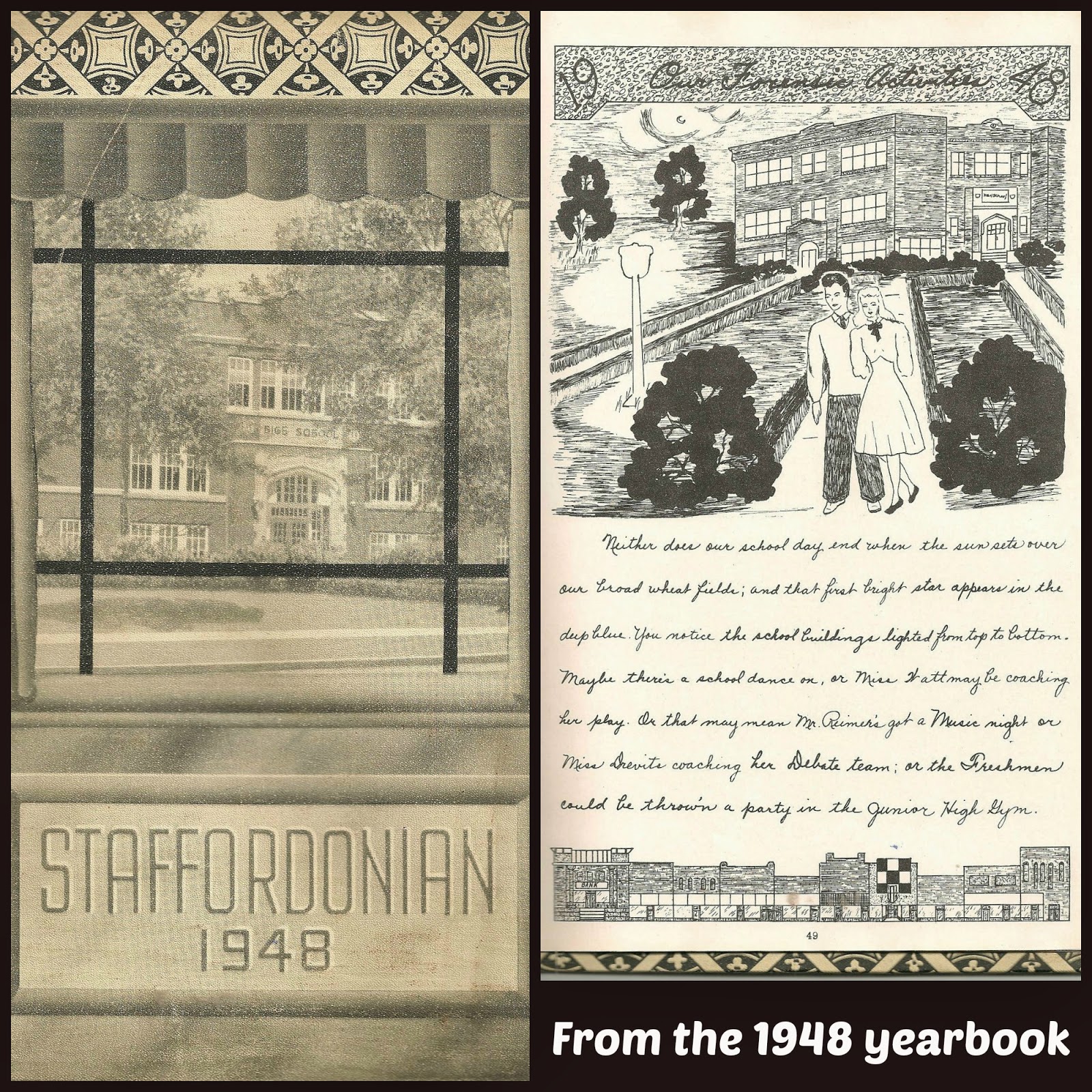 The front of the yearbook showed the school through a window. Inside, someone had drawn a sketch of the school. (I think the artist may have been Lawrence Tretbar. Click on the photo to see it larger.)

Randy graduated there in 1974; his brother, Lyle, in 1976, and sister, Kathy, in 1984. Their graduation ceremonies were all in the old auditorium, where the memories were piled as deeply as the debris. 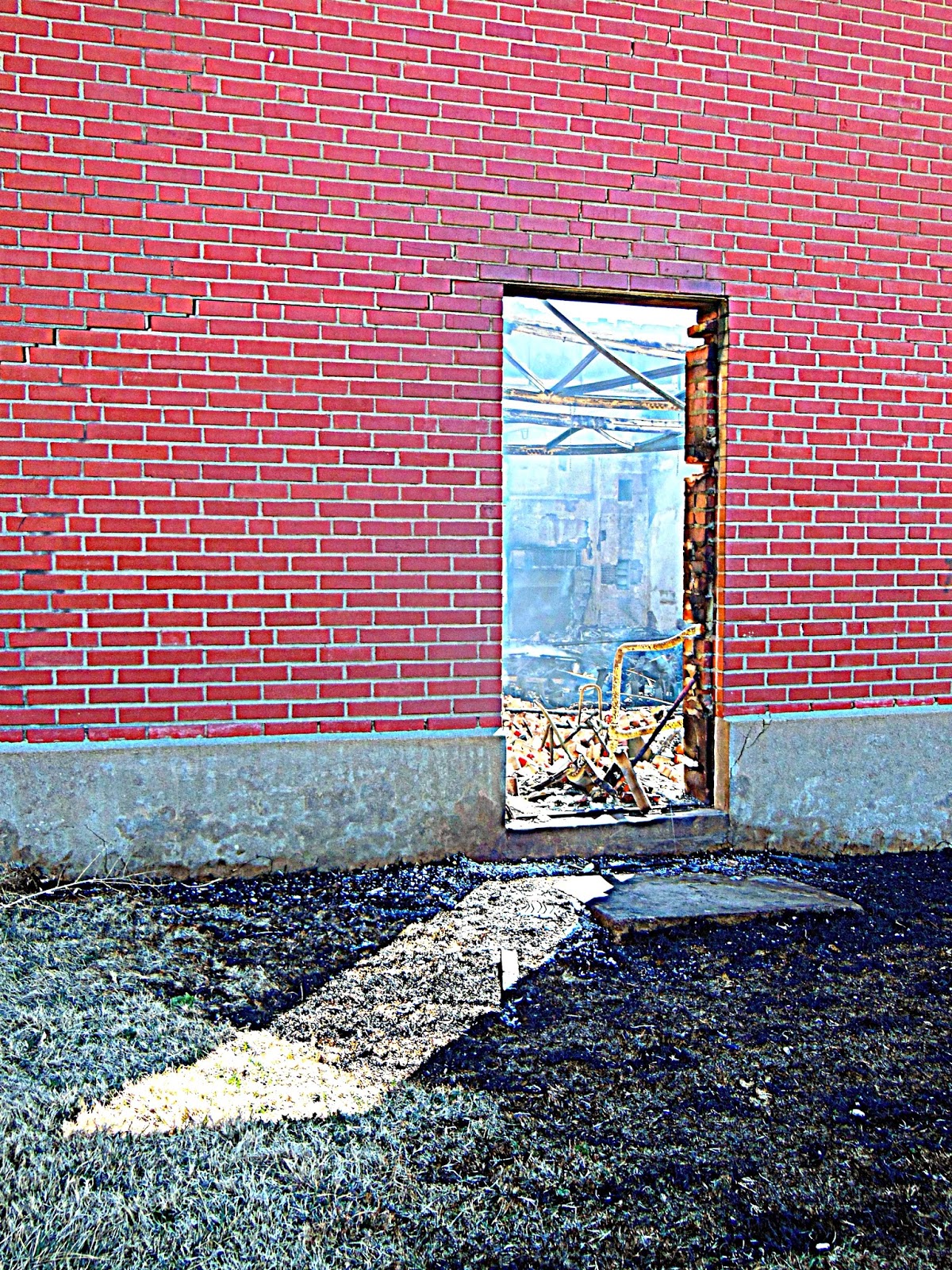 I took a photo of Jill on Moving Day 1999. The torch of education was passing from the old three-story building to the brand new addition a few blocks east. 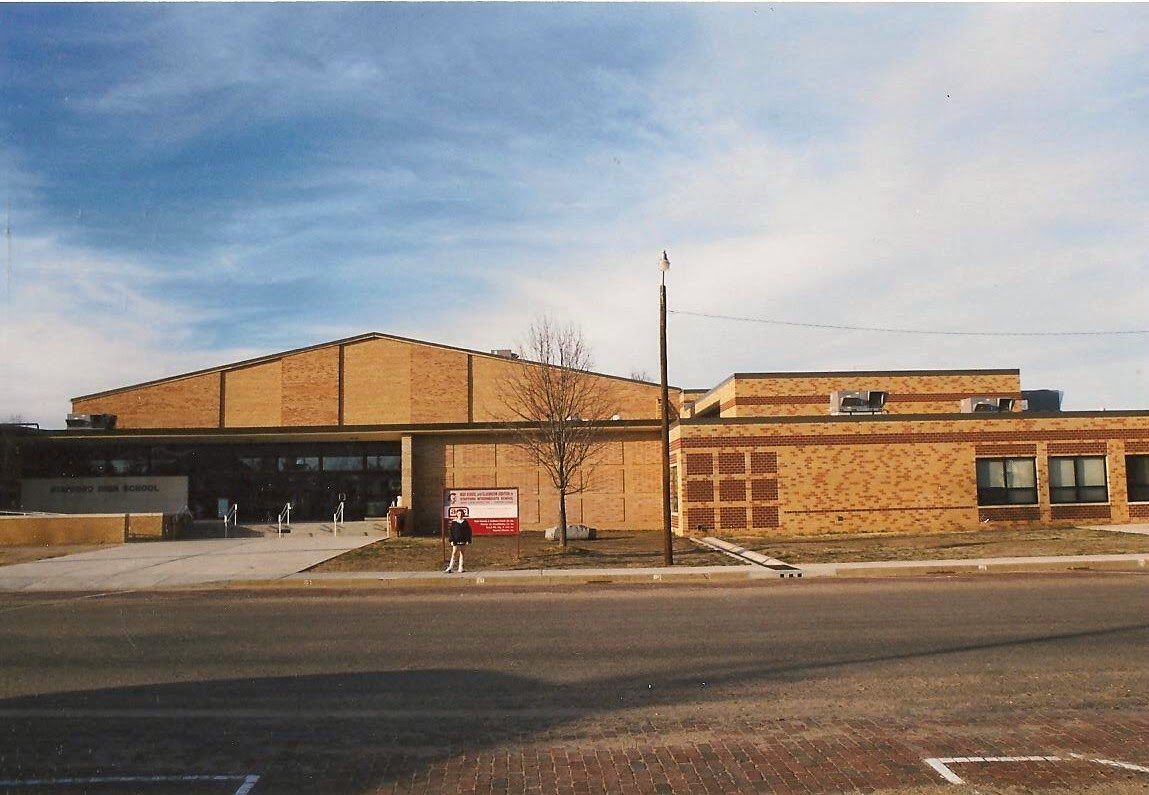 It's there where Jill's graduation ceremonies happened in 2004 and Brent's two years later in 2006.

But last Sunday, I was remembering the old school. It's where I went to work part-time in the middle/high school office when Brent was a first grader. It was a teeny-tiny office I shared with Judy Clough. It's where I first accompanied for the high school choir under the direction of Presley Herndon. On several May days, I was one of four pianists who played Pomp and Circumstance on two pianos in the auditorium for SHS graduation. 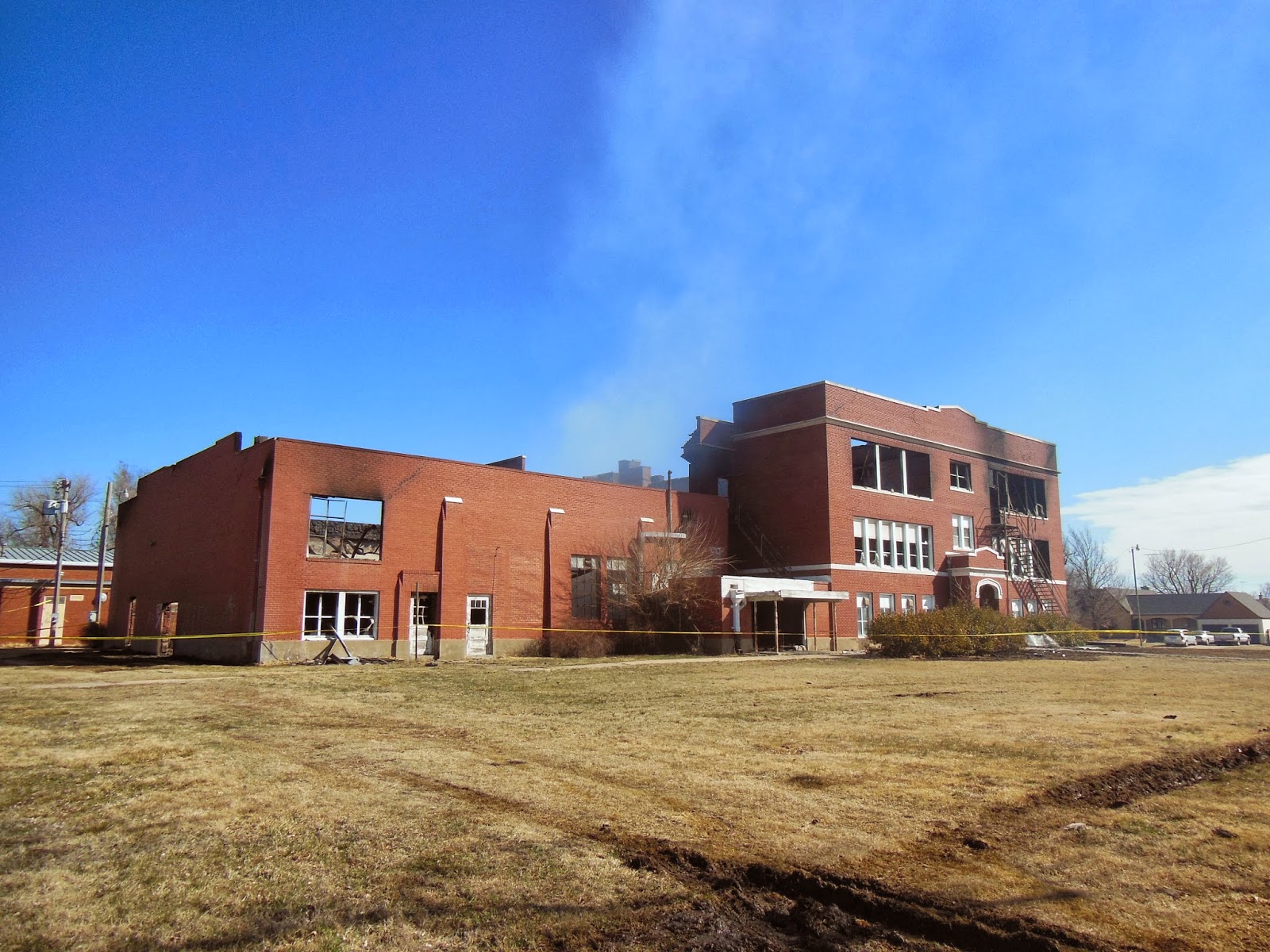 It's where Jill debuted as Woodstock in "You're A Good Man, Charlie Brown" in 1996. It was a high school play, but as a fifth grader, she got to play the part of the little yellow bird. (My attempt to find a photo is unsuccessful so far.) She remembers staying up past her bedtime to go to play practice. She says that if Dad took her to town for practice, she got to get a pop. (I guess Mom wasn't so easy.)
Then, as a seventh grader, she joined the cast of "Grease."  It, like Charlie Brown, was under the direction of Pam Turner. Jill and several of the middle school kids, were added to the large cast. Grandma Marie made her a poodle skirt. 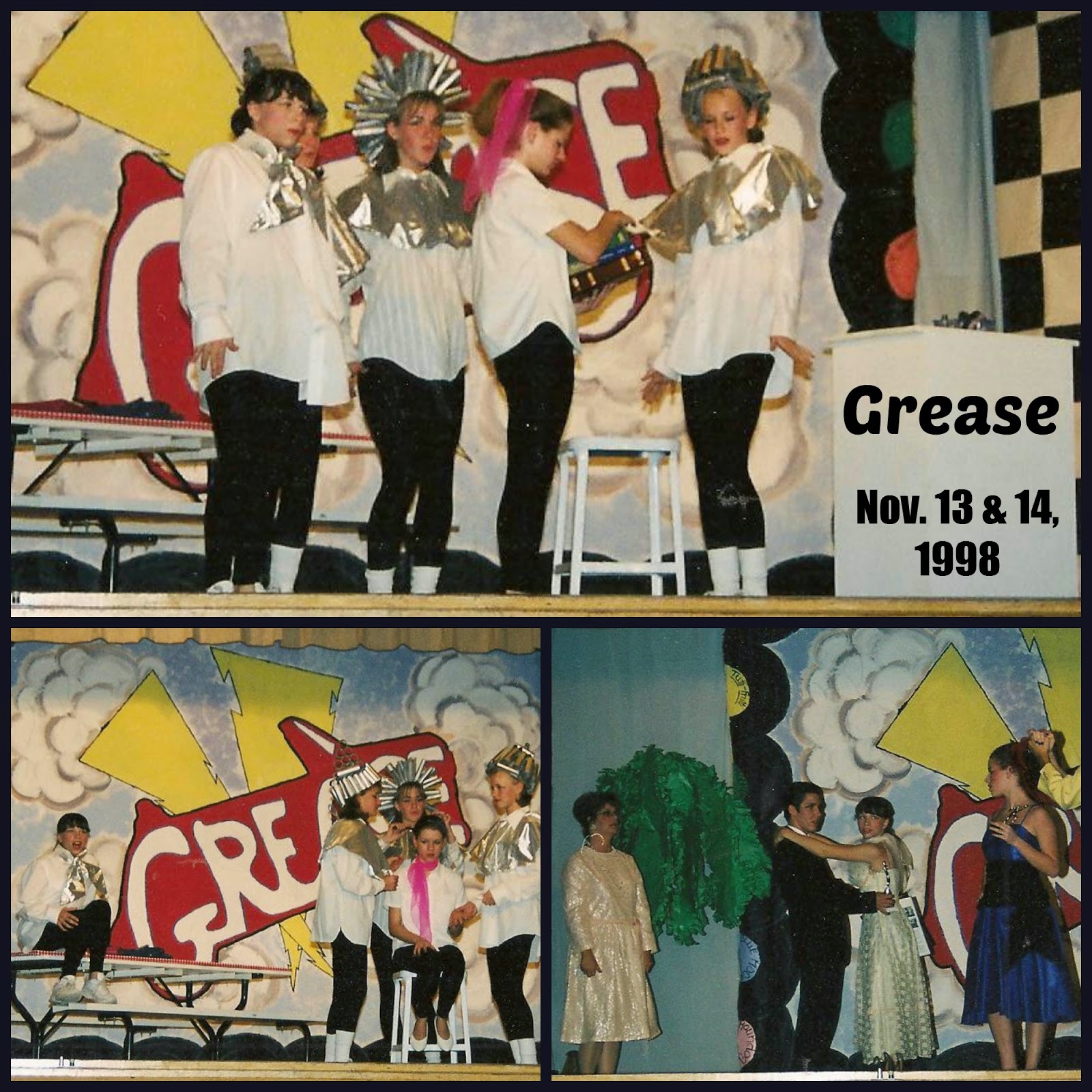 Jill sang a solo as Teen Angel (bottom left in the collage above). It would have been the last play in the old auditorium, produced November 13-14, 1998. 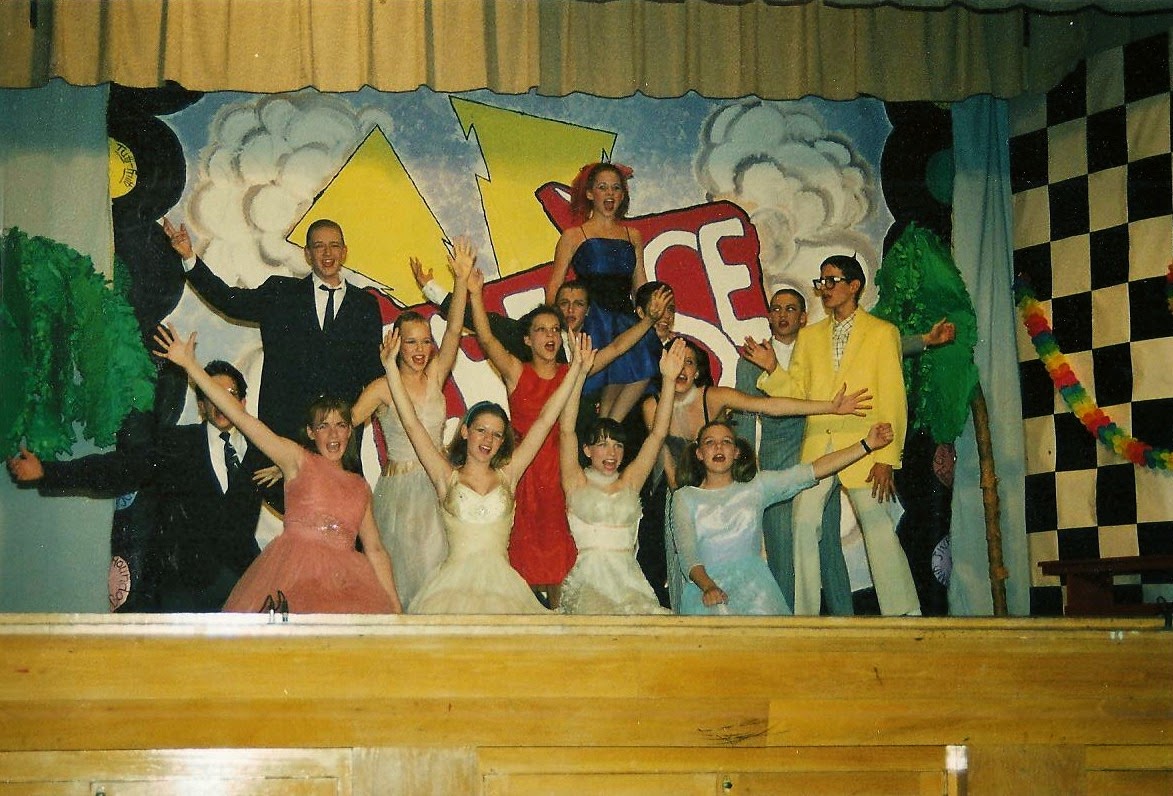 It's been a week of reminiscing as crews have torn down the walls of the old school. With three days of working baby calves, I didn't witness it in person. 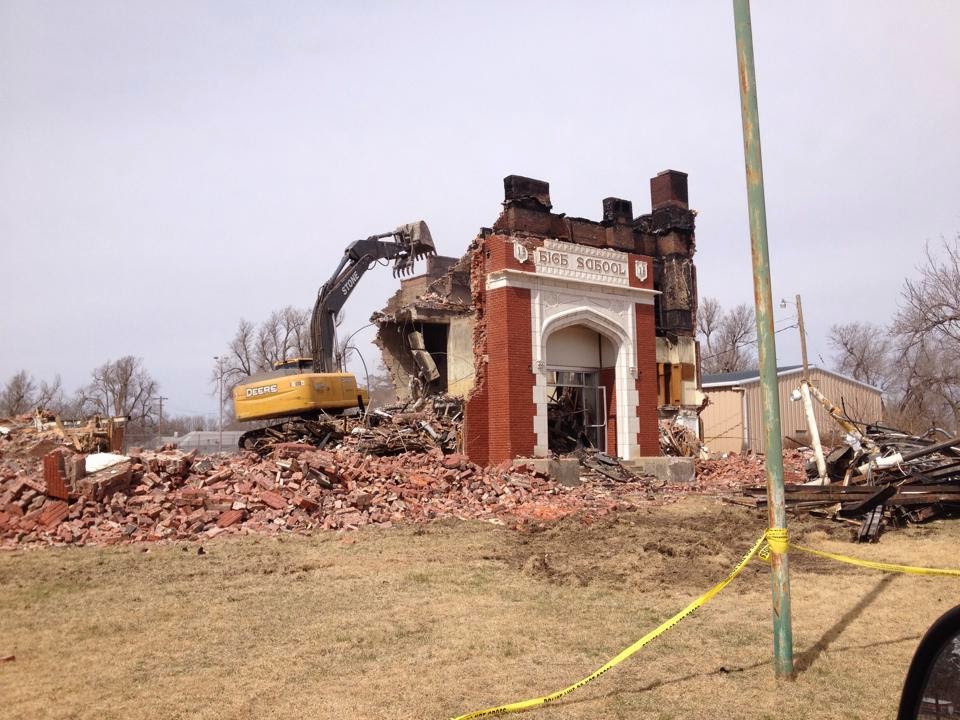 But the school's demise was center stage on Facebook news feeds for Stafford residents and SHS graduates. 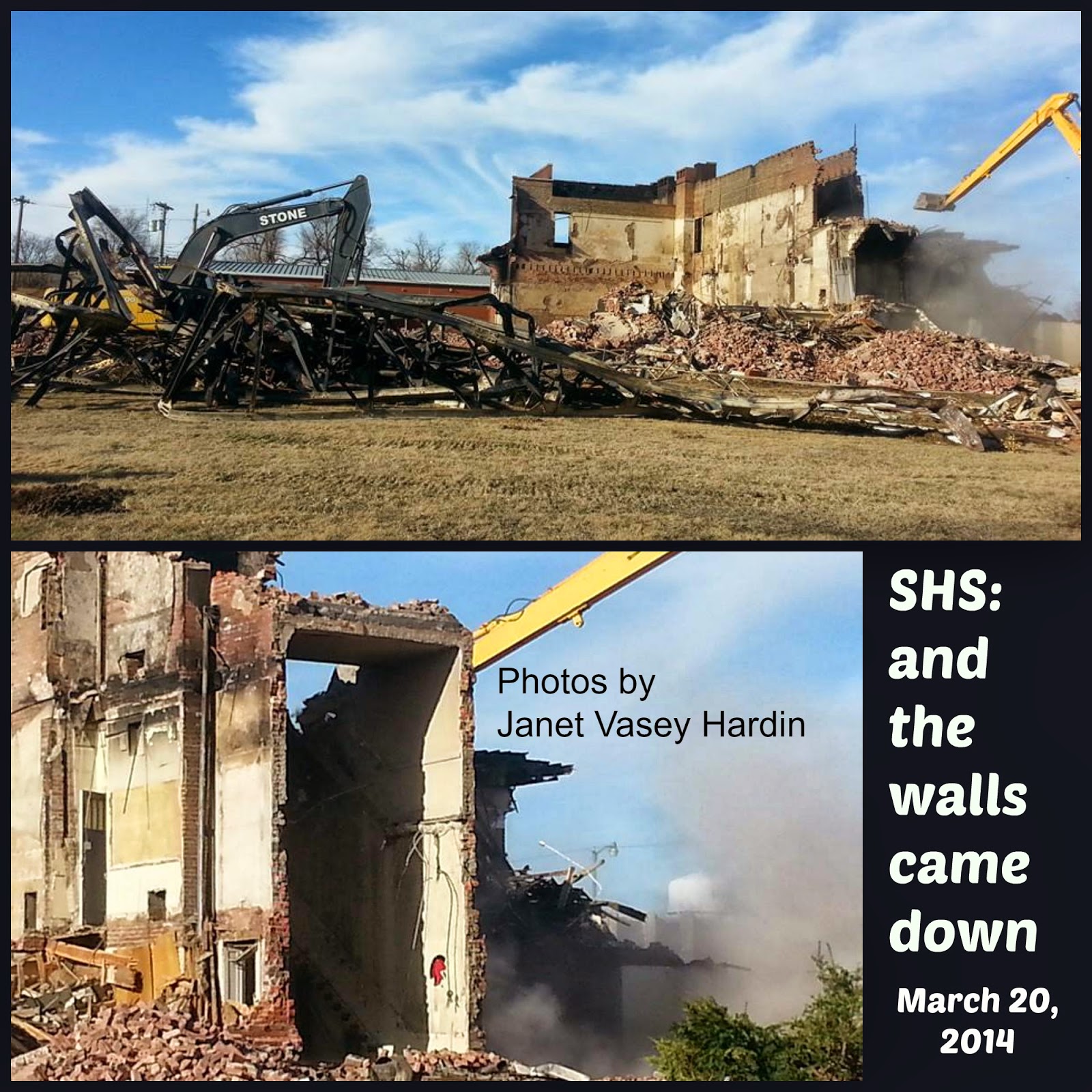 
Just one week later, the majestic east entrance is all that's left of the three-story building. The corner of Broadway and Park will never be the same. 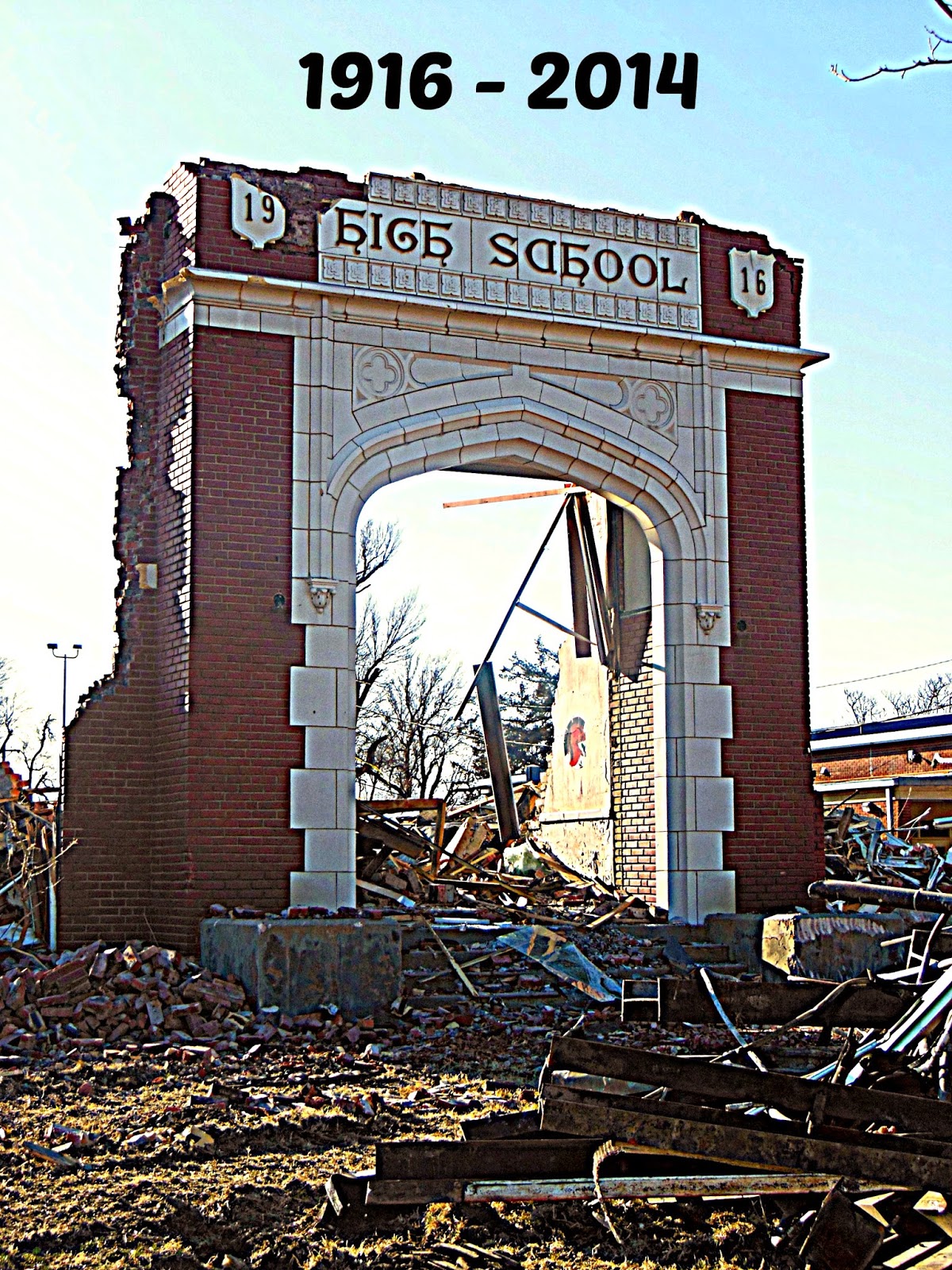 But the memories? The good thing is that they don't just drift into the atmosphere like smoke. They are alive and well.
Posted by Kim at 7:20 AM