You know the music in "Jaws" when the gigantic shark is about to sink his teeth into the boat? Duh-duh-duh-duh, DUH-DUH-DUH-DUH ...

That's kind of how I felt in the field on Wednesday morning.

The field looked peaceful and calm, but I could hear something munching. 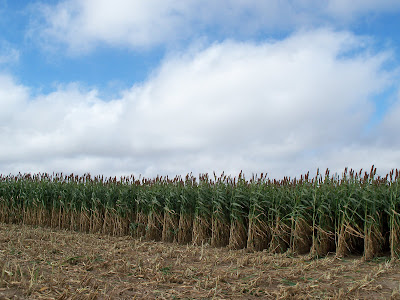 At first, I could only hear it. I couldn't see it. 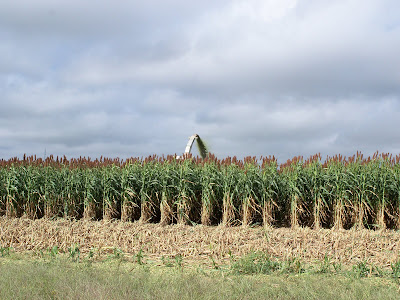 But then it started coming closer ... 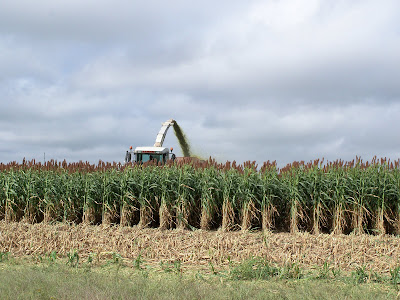 and closer ... until I could fully see the machine doing the munching.

It wasn't a shark doing the chomping. It was a Jaguar (a Jaguar silage cutter, that is). 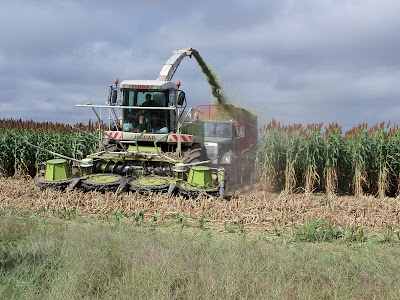 Harvesting silage is a different kind of harvest around here.

For one thing, it was all over and done with in about 4 hours. That's my kind of harvest. There's not the two weeks of wheat harvest angst with uncooperative weather and interminable breakdowns. And the temperature was a pleasant 75 degrees or so, as opposed to the 100-degree days of wheat harvest.

We hired Sallabedra Harvesting to bring their silage cutter and trucks to cut 27 acres of silage.

They each provided a truck to haul the cut silage from the field to the silo. And the wives provided a harvest meal for the four- to six-man crew.

On Wednesday, the Salladedra Harvest crew started cutting at about 7:30. By 11:30, they had moved to the neighbor's field to start filling his silo.

When you put everything in perspective, I don't think Randy waxes nostalgically for the "good ol' days" when they did it themselves. Maybe he'll "wax" just a little when the bill comes. But ... probably not.

We grow silage (also known as forage sorghum) for cattle feed. This particular variety is dual purpose: It has both grain and forage (or roughage), both of which are important to the cattle's diets. It provides TDN. Don't worry: I didn't know either. It stands for total digestible nutrients.

Randy planted the silage in May. By August 16, when this photo was taken, it was well above Randy's 6-foot, 1-inch head. 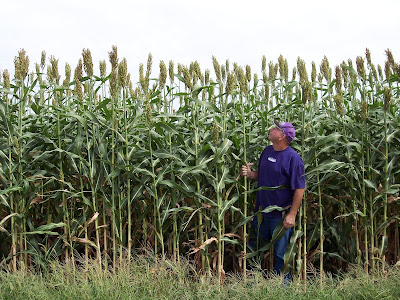 He planted the silage on acreage fairly close to the silo. That way, it doesn't have to be trucked as far when it's cut. 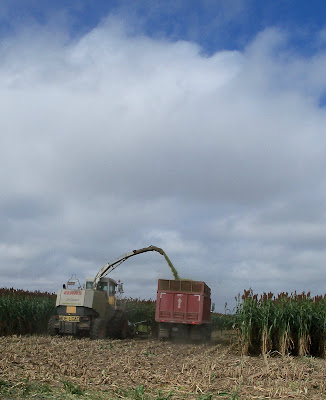 The Sallabedra crew brought three trucks. The trucks are filled "on the go," with the cutter unloading as both the cutter and the truck drive through the field. 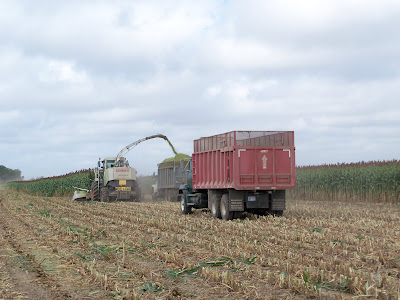 Here you can see the second truck ready to move into position when the first truck is full. 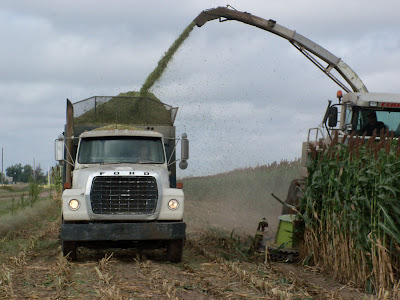 The drivers took the trucks to the silo and dumped each load. 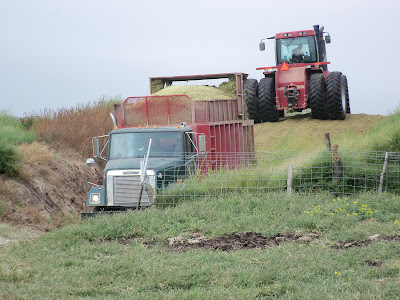 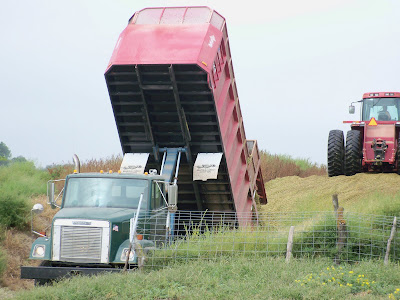 On Tuesday, Randy worked on cleaning old silage out of the silo. On Wednesday morning, Randy drove the loader tractor and pushed silage up into the pit. Jake drove the 4-wheel-drive tractor to pack it down. 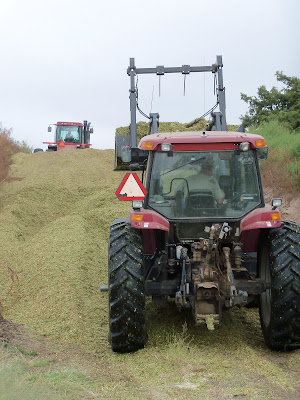 I'm kind of a worrywart. I don't like the slipping and sliding and cockeyed angles required to push and pack the silo. Who needs to ride amusement rides at the state fair when you can hitch a ride on a precariously perched tractor? 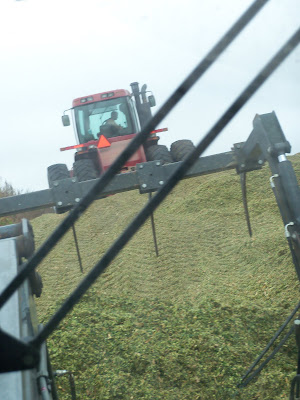 However, later in the morning, they were relieved of their silo duties. The harvesting crew really wanted to get our silage and our neighbor's done before any rains arrived via Tropical Storm Hermine. So they brought in their big tractor and blade to finish the job. 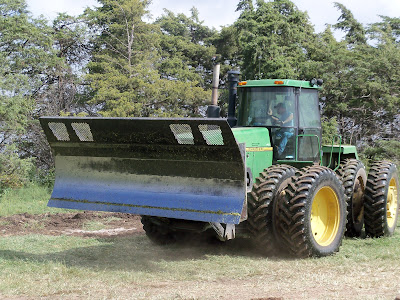 Our 500-ton storage capacity in the silo ran out before the whole field was cut. The harvesting crew moved to our neighbor's fields. Once they filled his silo with his silage crop, the crew came back to our field. They chopped the rest of our silage and added it to his larger silo, and he'll pay us for the additional tonnage. 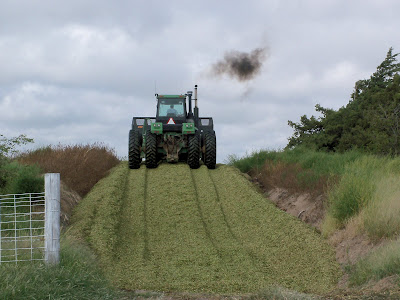 Randy estimates the silage averaged around 25 tons an acre. Kevin, the harvest crew owner, said it was good silage. (Are farmers like mothers? When someone gives them a compliment about their crop is it like a mom basking in a favorable comment about their wonderful offspring? I think so.) 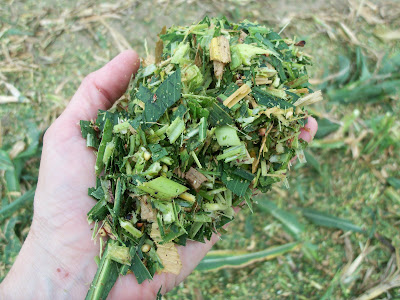 We will feed the silage this winter. They'll fence off the silo so the cattle don't gorge on a self-serve buffet. They'll use the loader tractor to scoop silage onto the feed truck.

They'll use the truck to fill feed bunks at different corrals and pastures. Most of our bunks are metal feed bunks, but the photo below shows some old wooden feed bunks located by the silo. 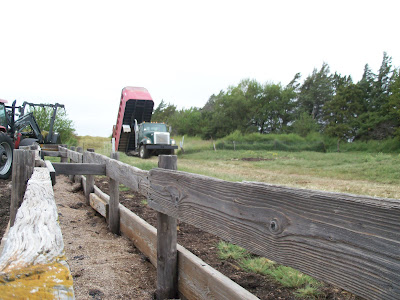 The mama cows will get the silage as is.

For the feeder cows, Randy & Jake will add about 3 to 4 pounds of vitamin- and mineral-enriched grain per head, since they need the additional energy to grow to get ready for market.

And there you have it: Silage harvest on the County Line.