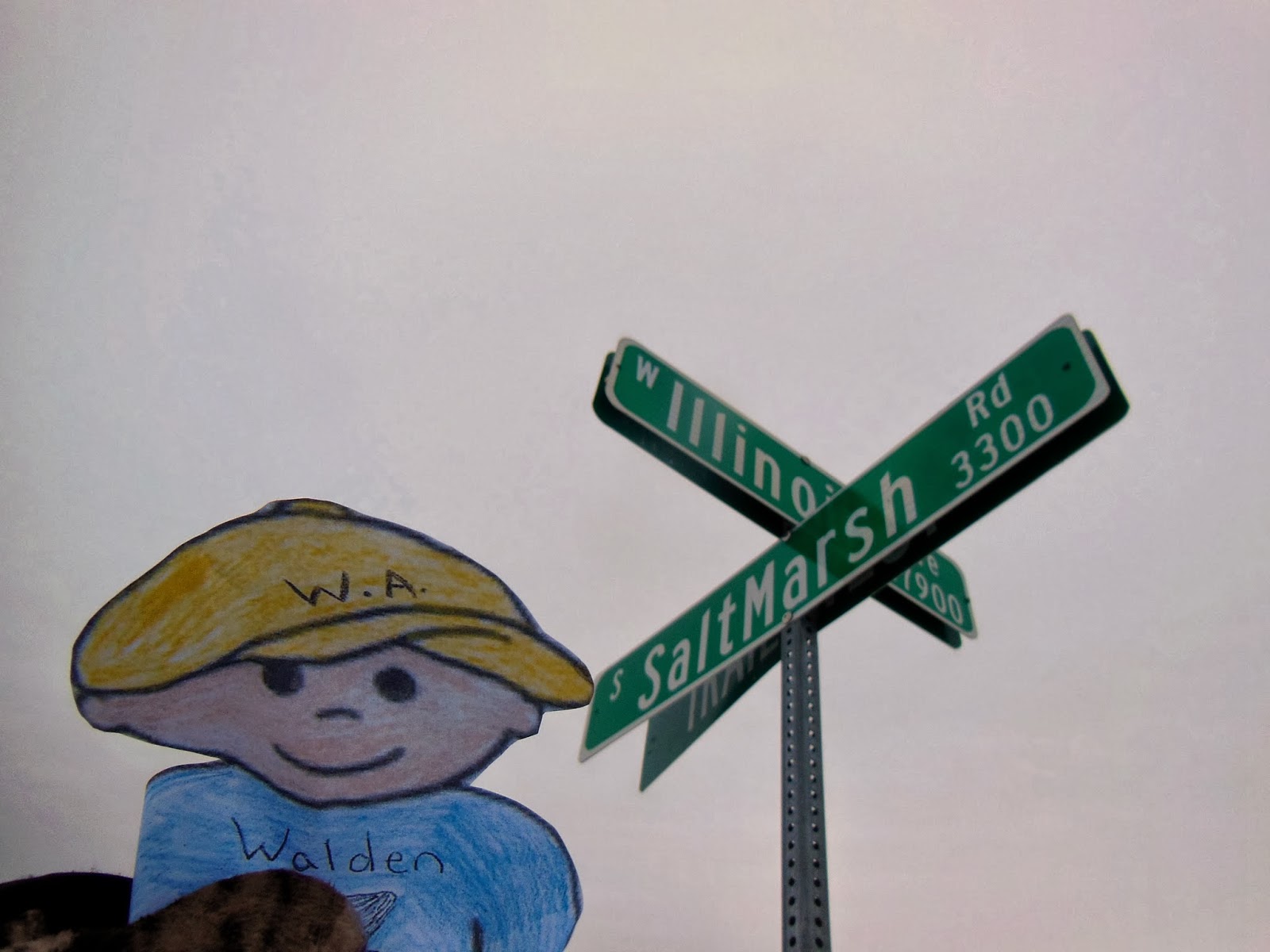 As a kid, you're taught to always tell the truth. When you get older, you realize that truth sometimes needs to be tempered. Any husband can tell you that it's not necessarily wise to respond with absolute truth when a wife says, "Does this dress make me look fat?"

I have my own dilemma about truth.  For the past several days, we've been hosting a visitor named Flat Aggie. He's from Miss Holbrook's fourth grade class at a charter school, Walden Academy, in Willows, California.

He came to learn about life on our Kansas farm. Flat Aggie is a project of my southeast Kansas blog friend, Nicole, and her Tales of a Kansas Farm Mom blog. 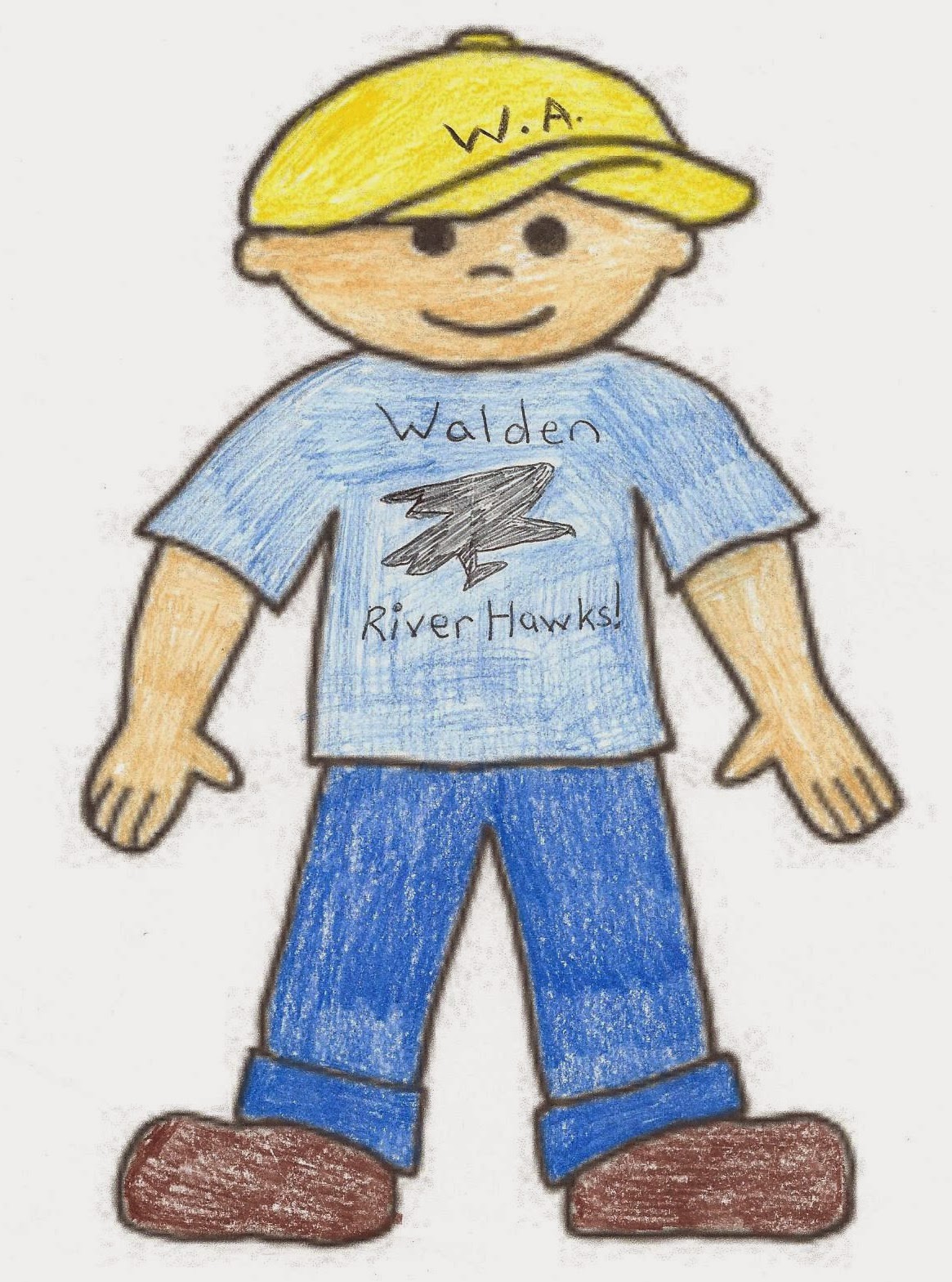 Have you heard of Flat Stanley? It's a children's book by Jeff Brown about Stanley Lambchop, who is an ordinary boy until the night his bulletin board fell off the wall and flattened him. All of a sudden, Stanley can slide under doors, mail himself across the country in an envelope, and fly like a kite. Flat Stanley has his own website for all the adventures he's taken since he was created 50 years ago. (We actually had a Flat Dennis come visit us at harvest three years ago.)

Similarly, Flat Aggie goes to farms all across the country to learn about agriculture. Aggie then reports back to the class with a letter from the farm. Randy and I have been taking Aggie with us when we check cattle and do other things on the farm, so he's getting to experience life here in South Central Kansas.

But I now have to figure out how to handle a rather delicate issue. On Sunday, Flat Aggie went with us on repeated trips to the pasture south of our house as we attempted to care for a new baby calf in sub-zero wind chills.

The mama, R34, was out alone in the pasture during our welfare check around 1 PM Sunday. That's often a sign of a mama who is about to have a baby. 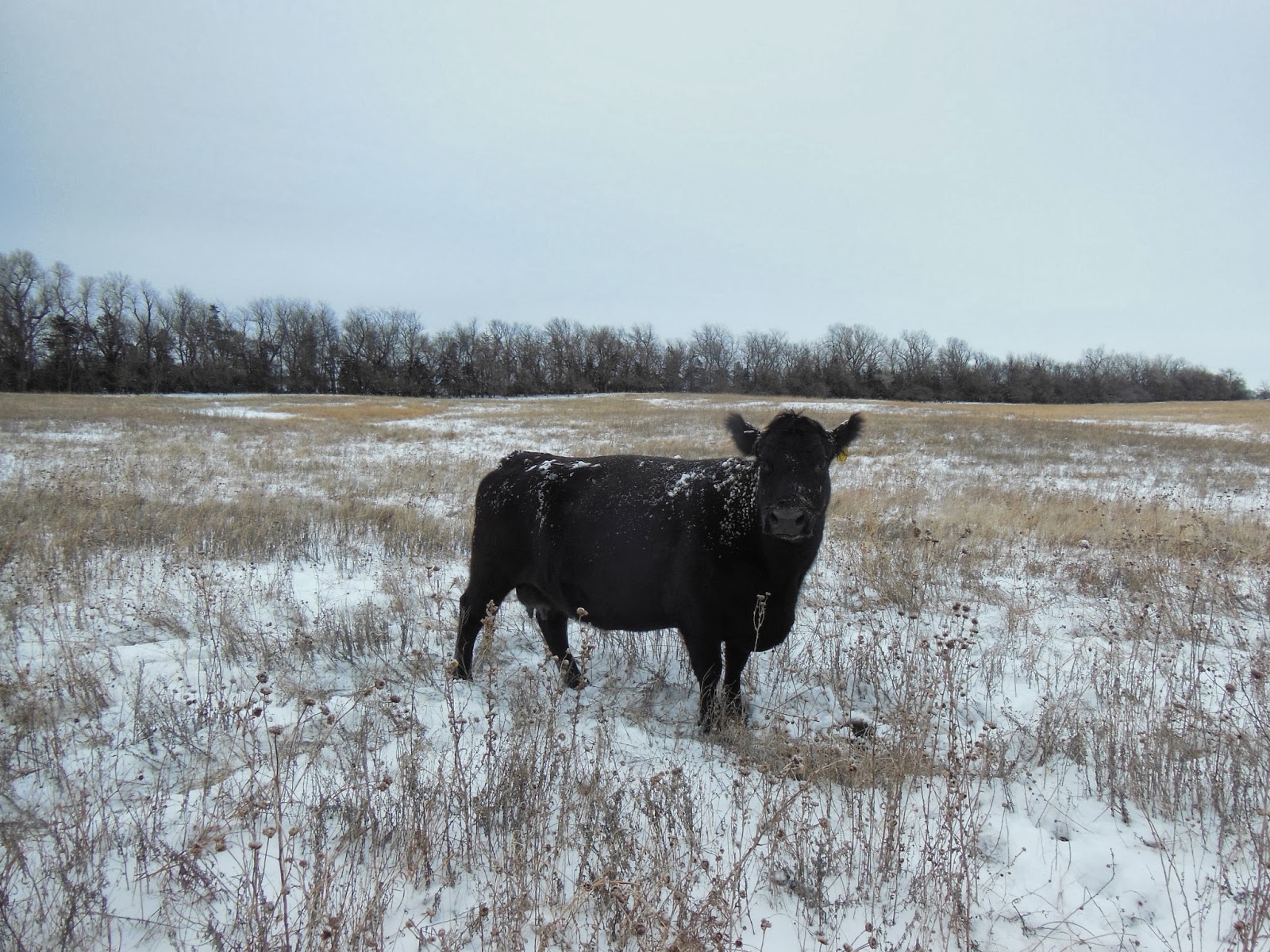 Randy tried to use the pickup to herd her back toward some straw and a windbreak, but she was not interested.

Randy, Aggie and I had just seen several babies nestled into hay by the feed bunks. But, after repeated attempts, we gave up with trying to get her to go somewhere she didn't want to and decided to check back in an hour. 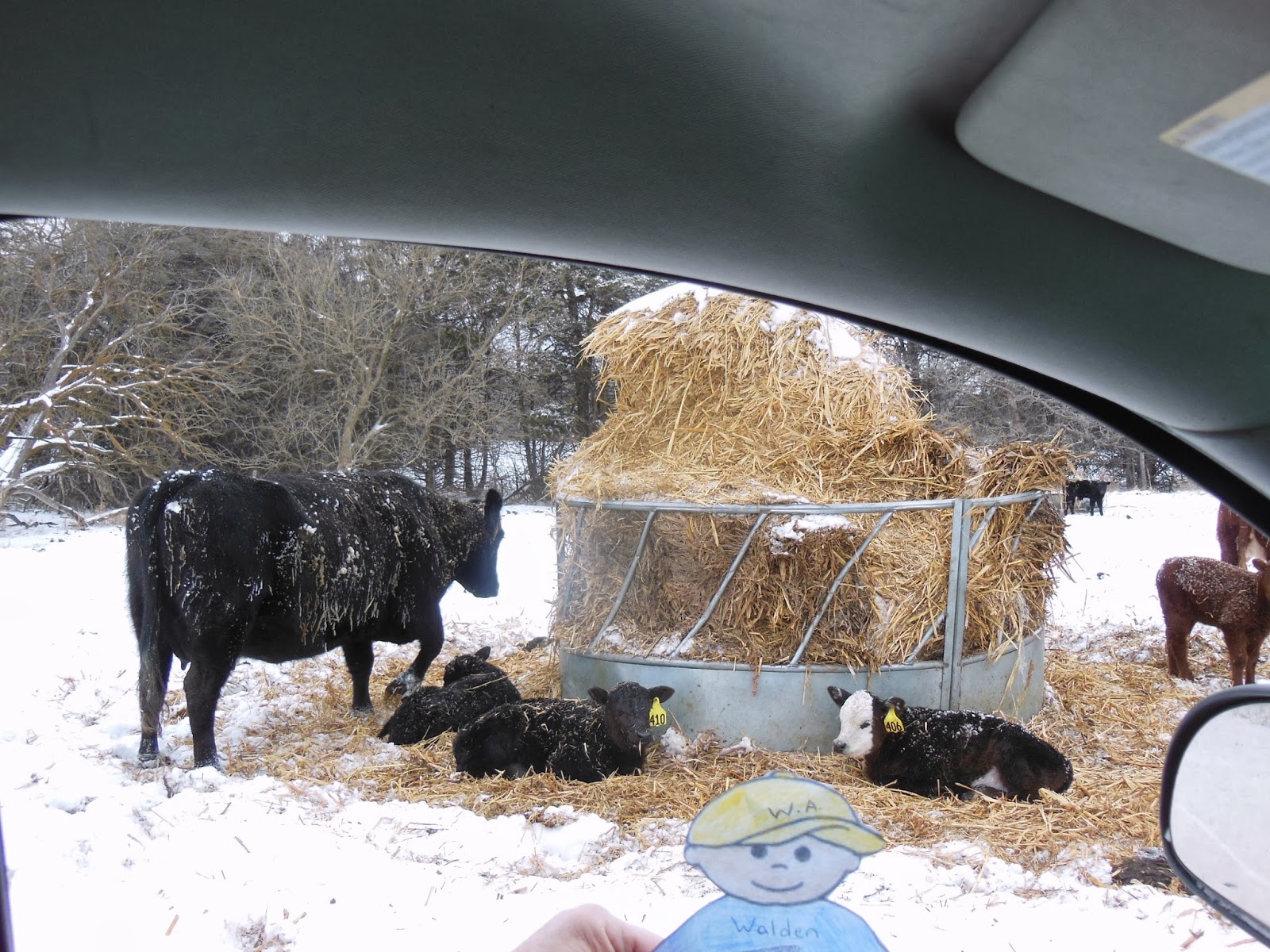 When we checked again, the calf had been born and got up on its wobbly legs. 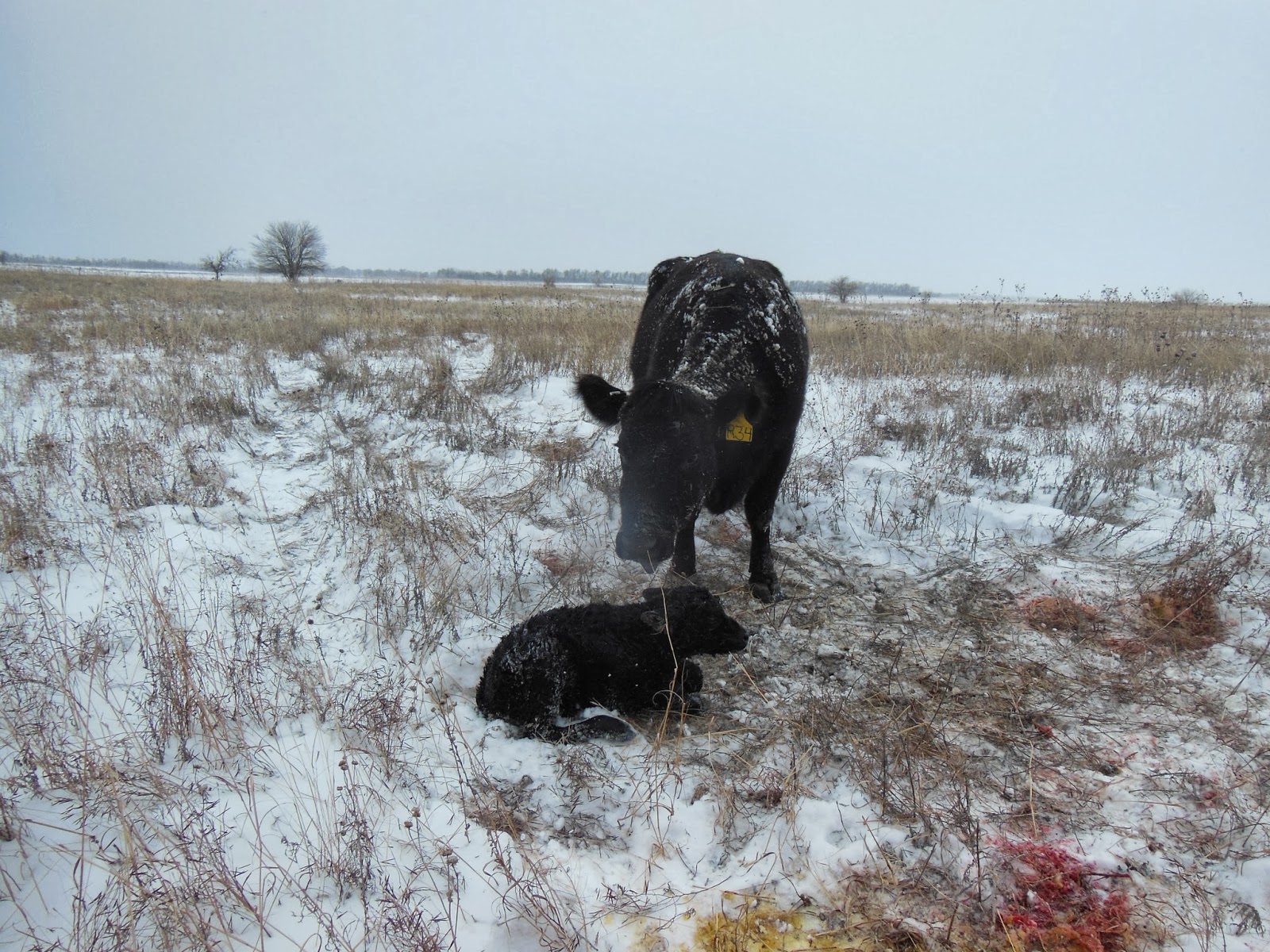 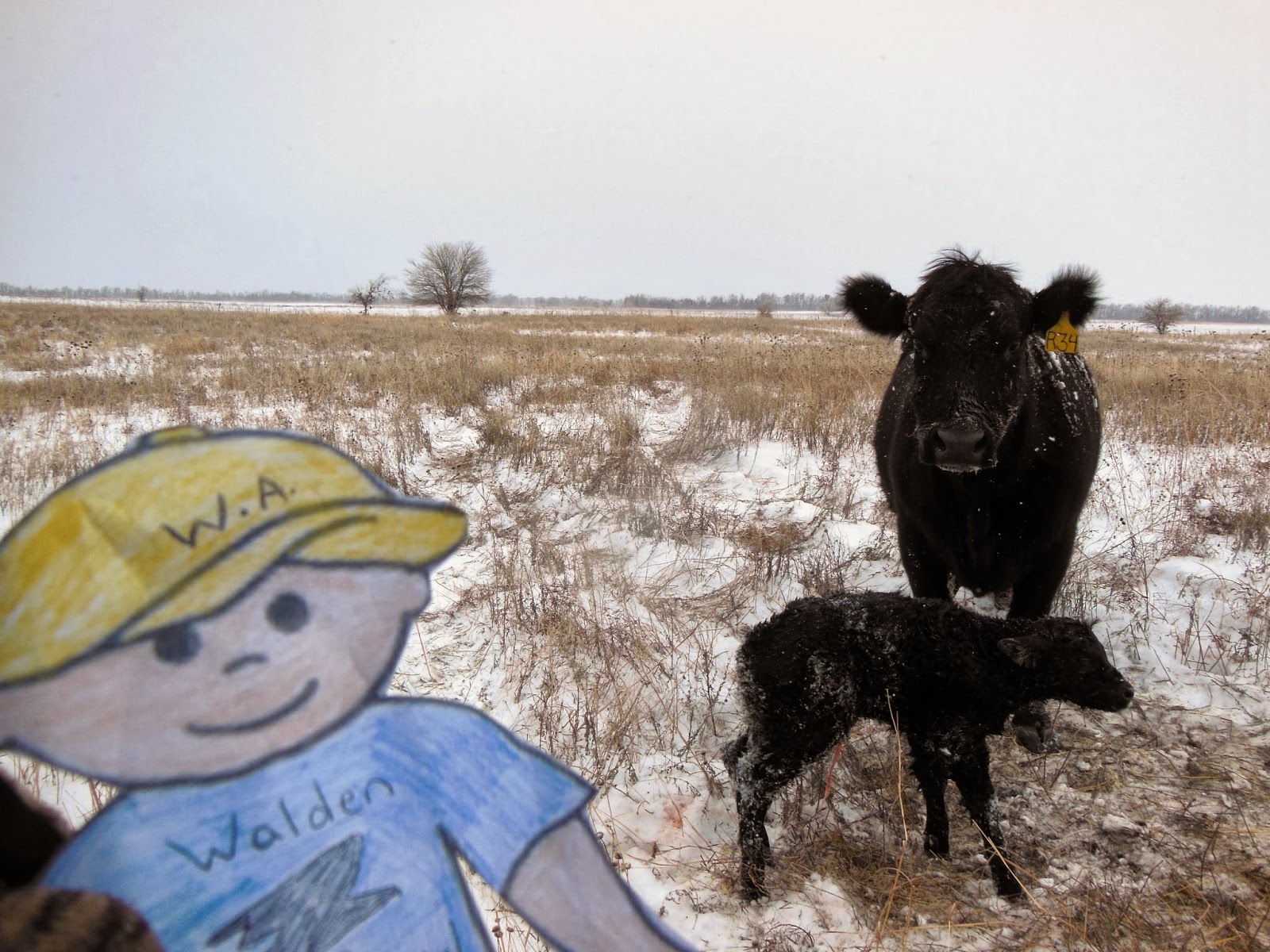 The mama was licking off the baby, like she's supposed to do. 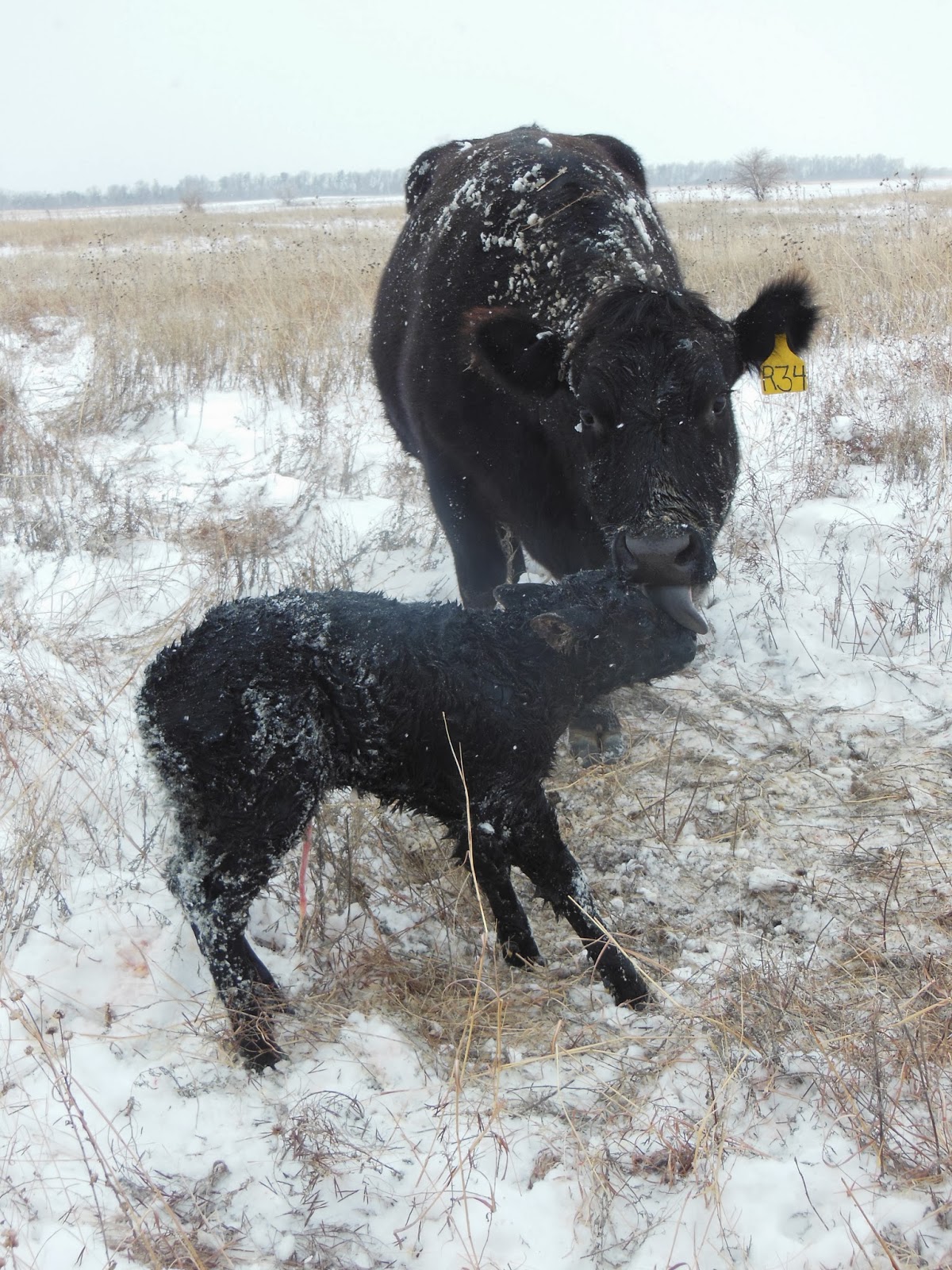 But the baby was obviously cold, so Randy got out one of the calf jackets we've been trying out this year and put it on under the watchful eye of the mama. 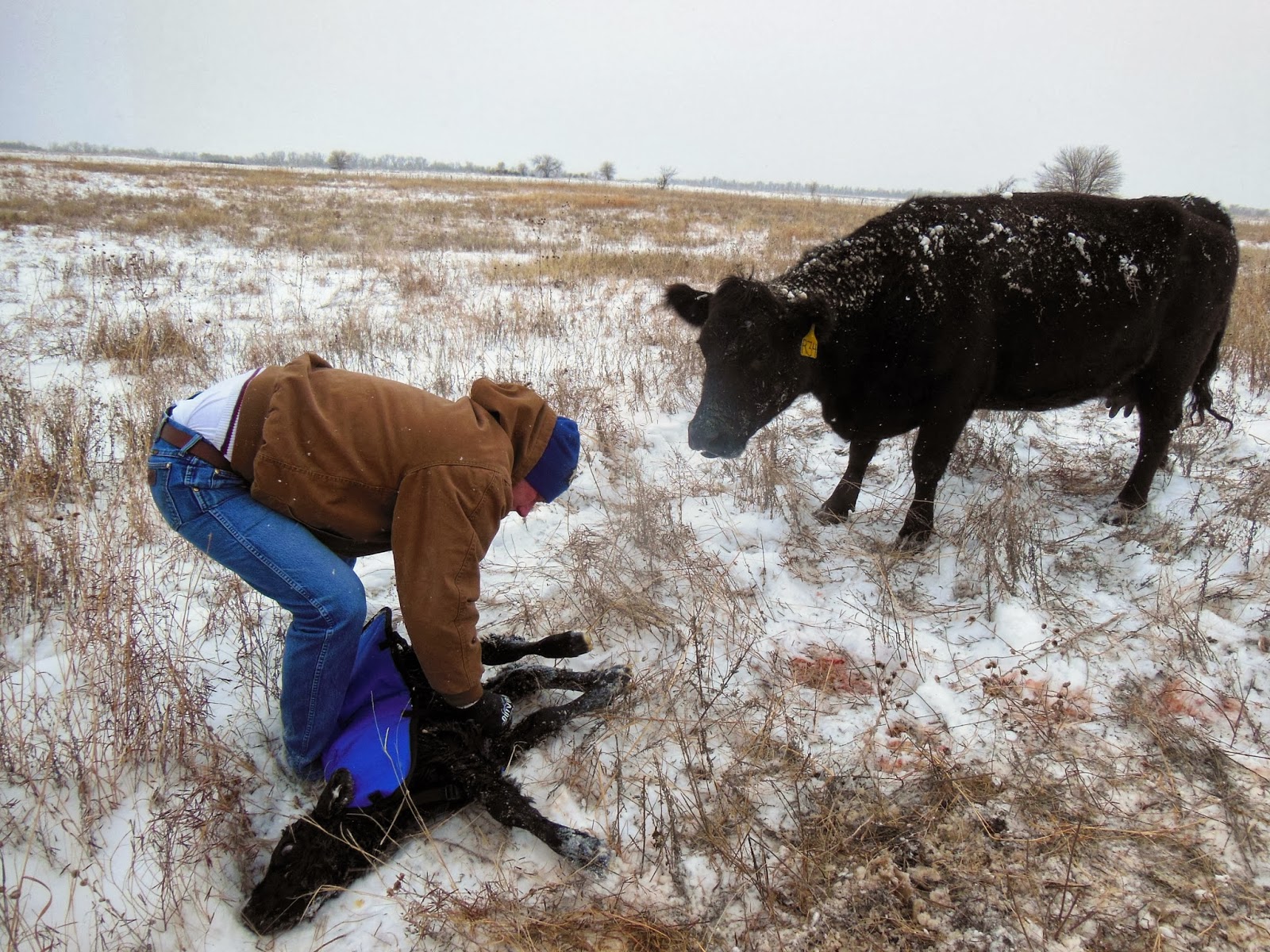 Then we put it in the pickup cab to try and warm it up and dry it off a bit. 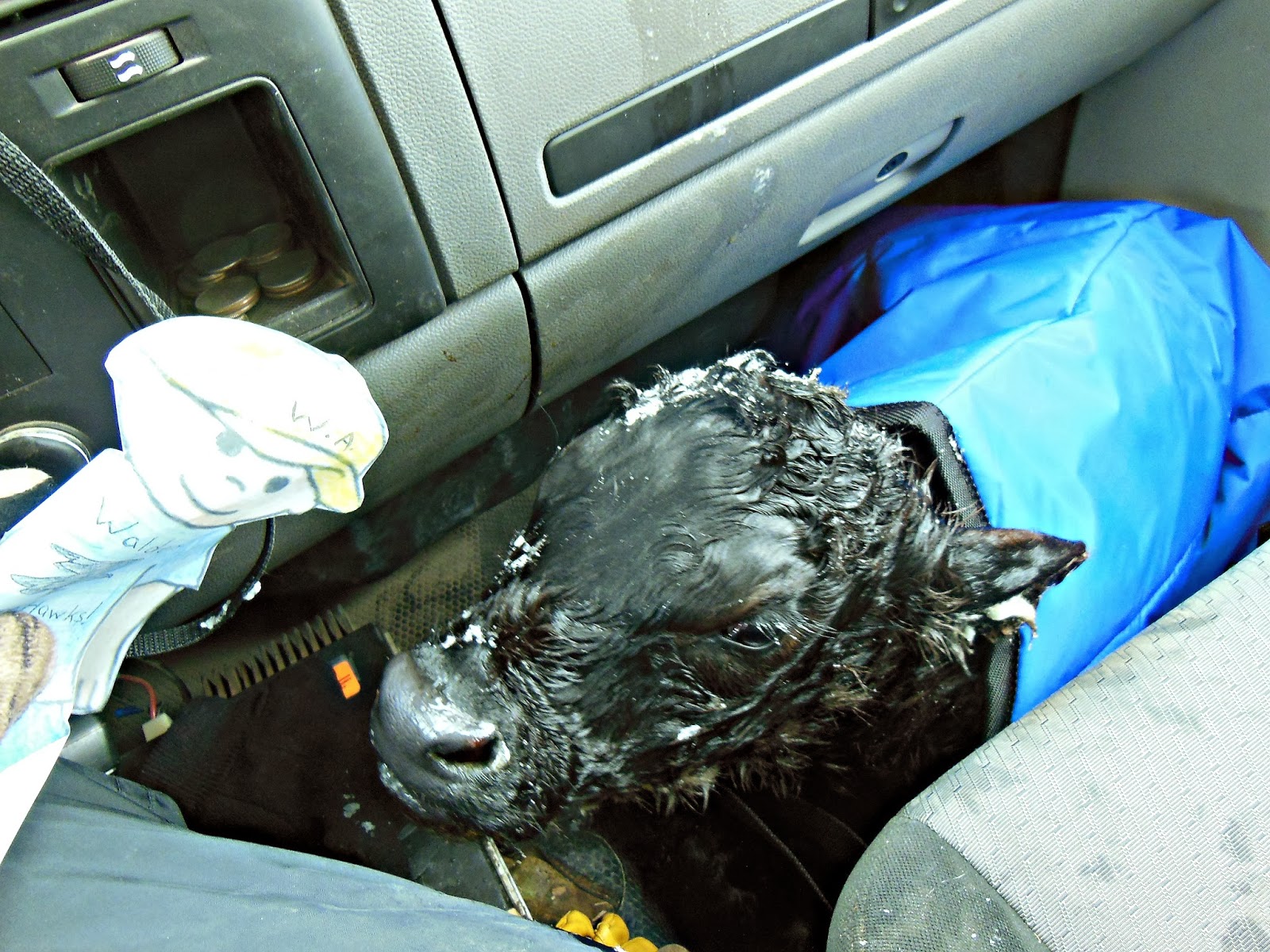 It was a tight fit with Randy, Aggie, the calf and me all scrunched into the cab.  It's good Aggie didn't take up much room. The rest of us were getting warm, that's for sure. 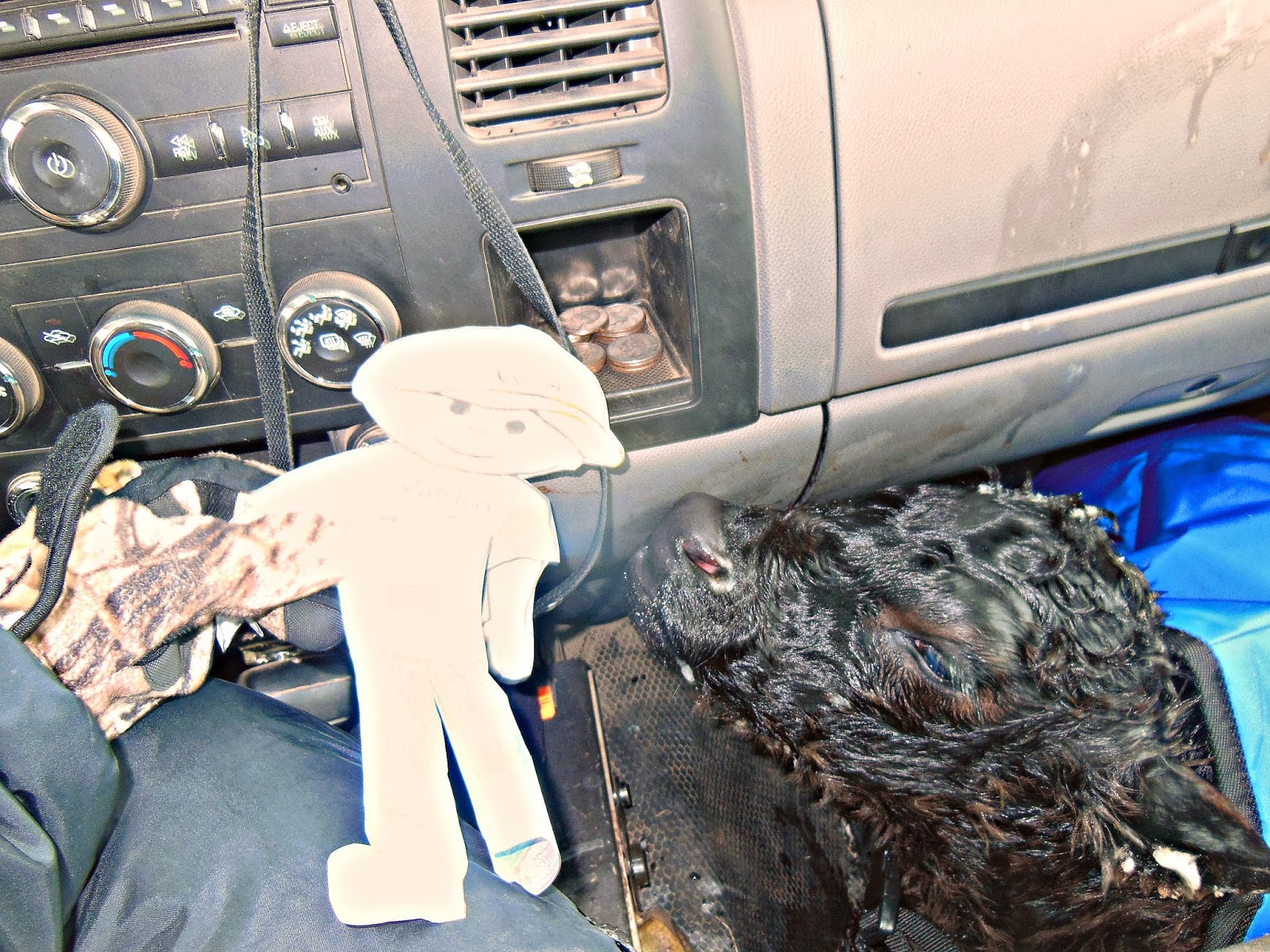 With the calf in the cab, we tried to get the mama to follow up to the windbreak. She'd follow for a few feet, then she'd turn back around and go to the spot where she'd given birth, smelling the ground there.

We tried putting the calf in the bed of the truck so that she'd see the calf and follow. She still wouldn't budge from the middle of the pasture. 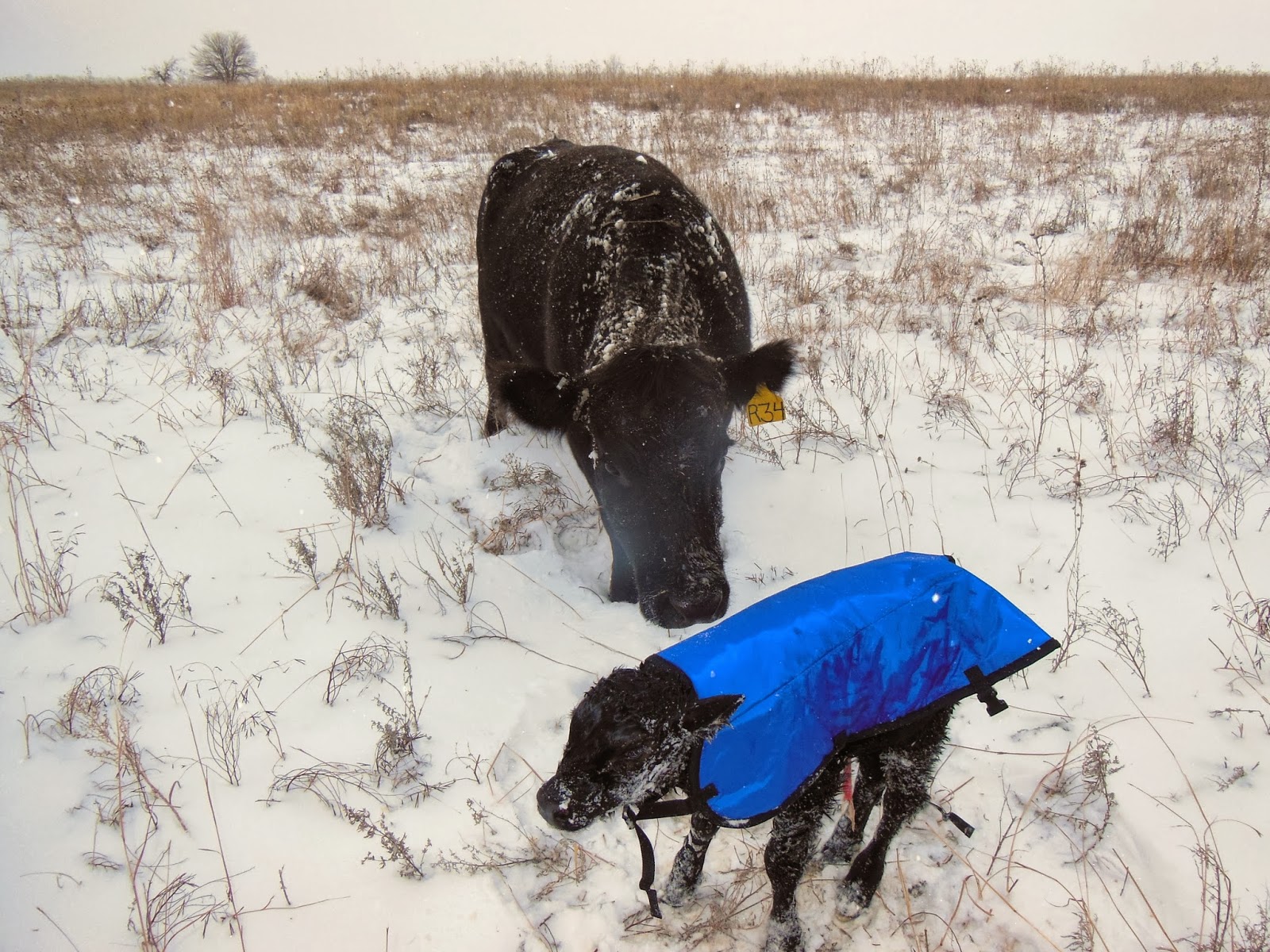 Finally, we put the calf back out with the mom and decided we'd come back and check in another hour. (Of course, the calf in all its newborn wobbliness immediately fell down in the snow.)

When we returned to the pasture, we brought a bottle to try to warm it up from the inside out. 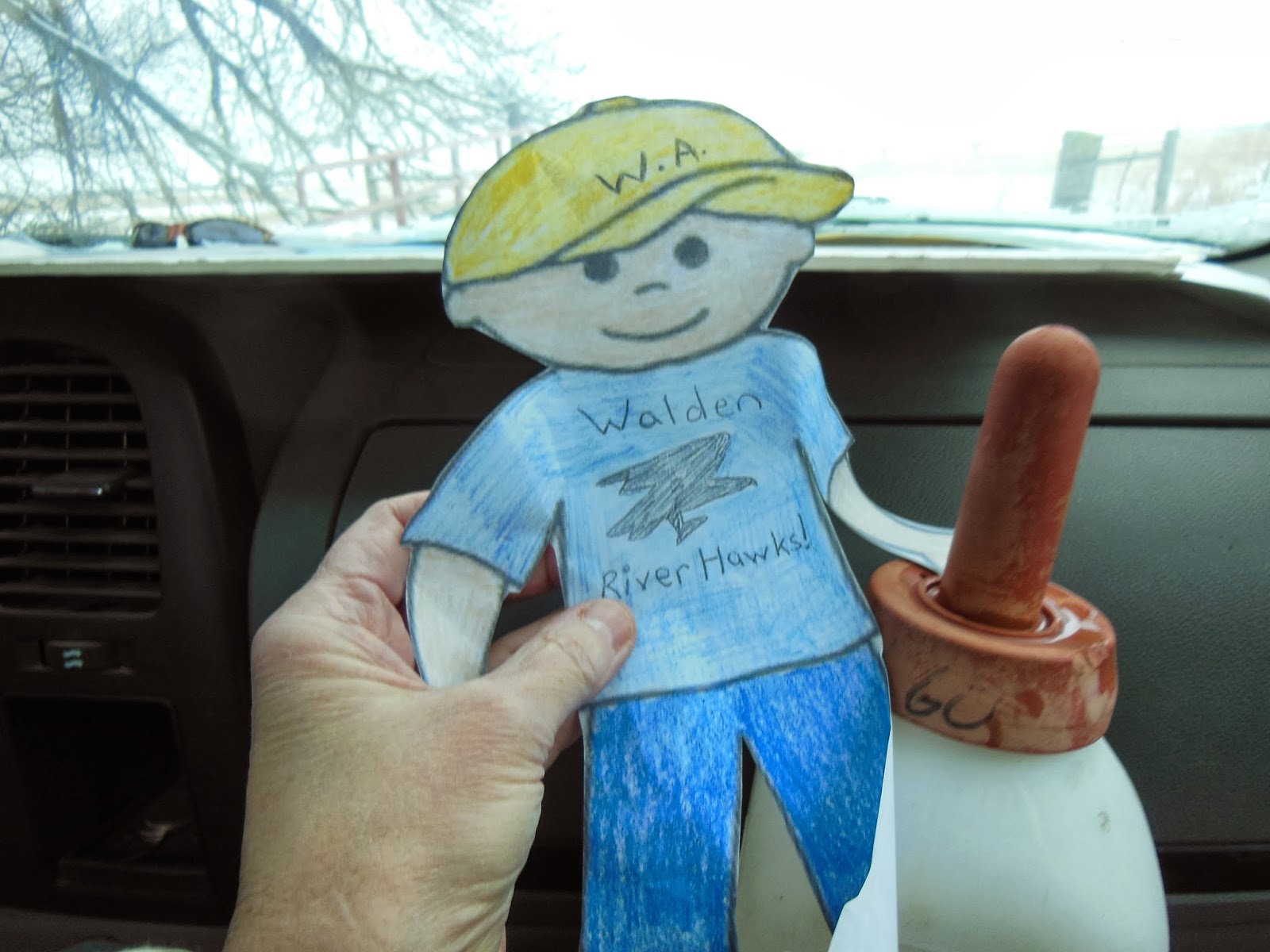 The mama again watched as Randy fed the baby calf some warm milk. 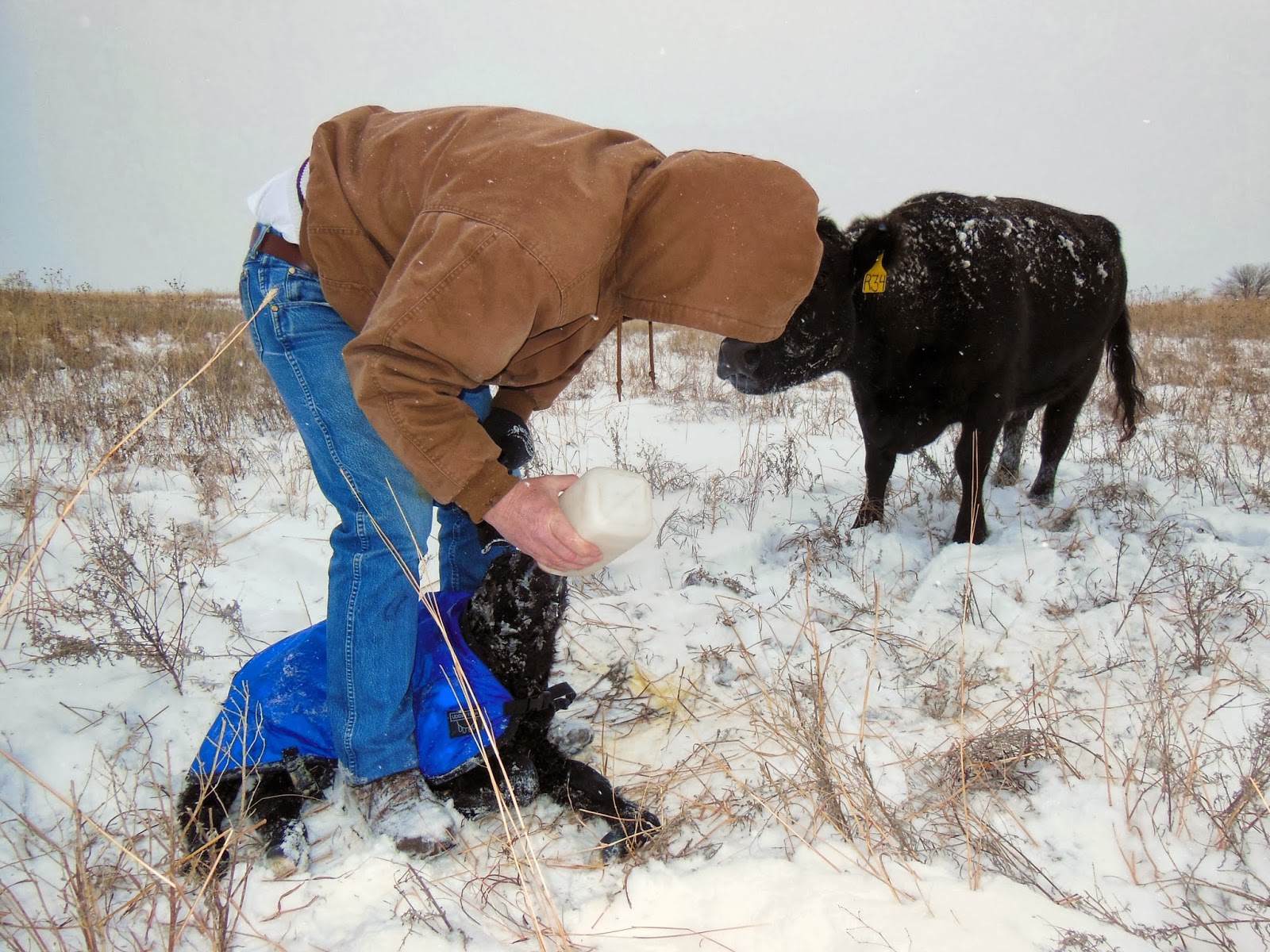 Again, we tried to get the mama cow to follow us to shelter. But she wasn't interested, so Randy put a blue blanket down on the snow-covered ground and we left it there. 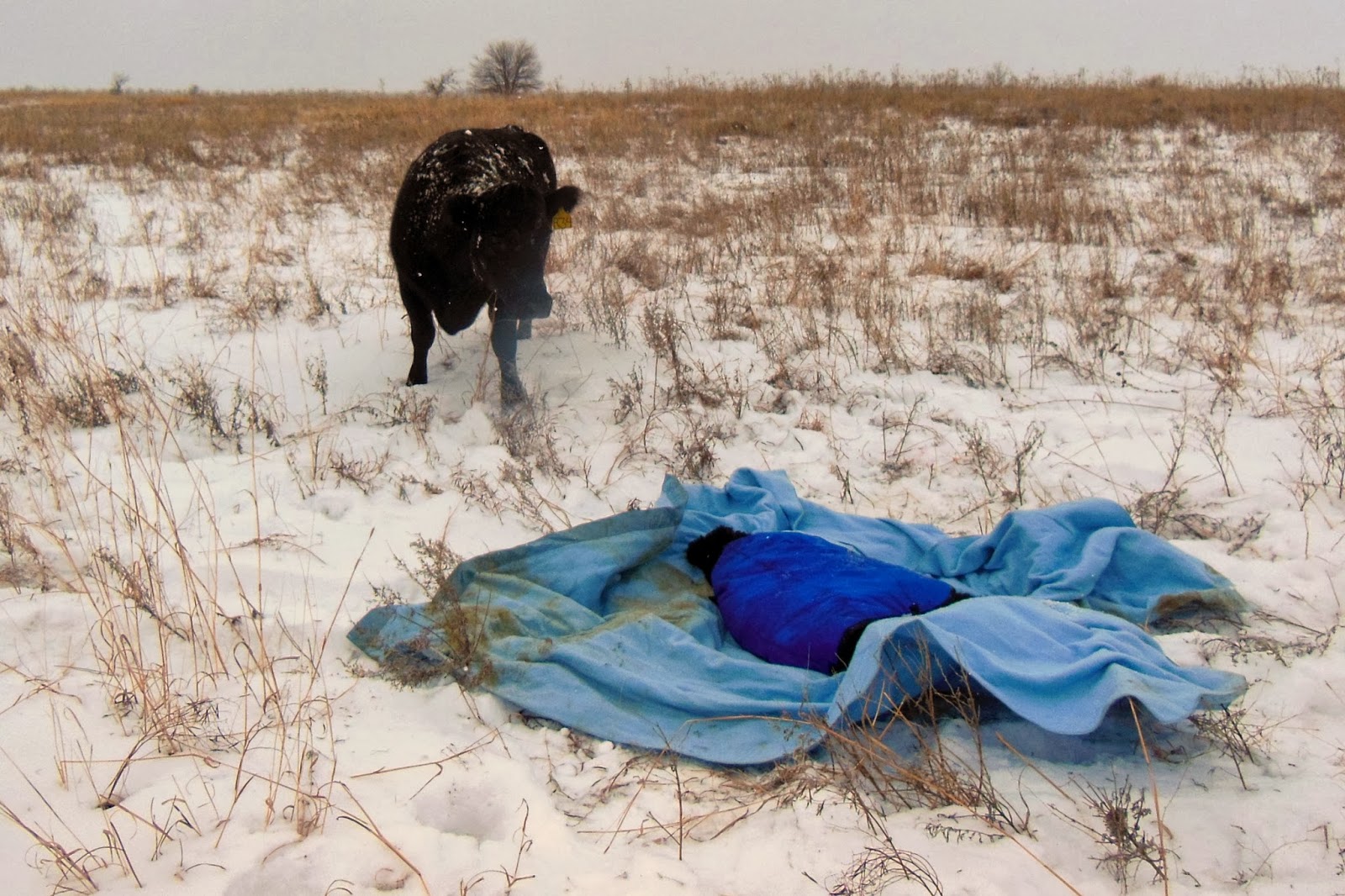 Aggie, Randy and I watched as the mama cow again tried to get the baby to get up. When Randy checked them at  6 PM, then at 11 Sunday night, the baby was still alive. 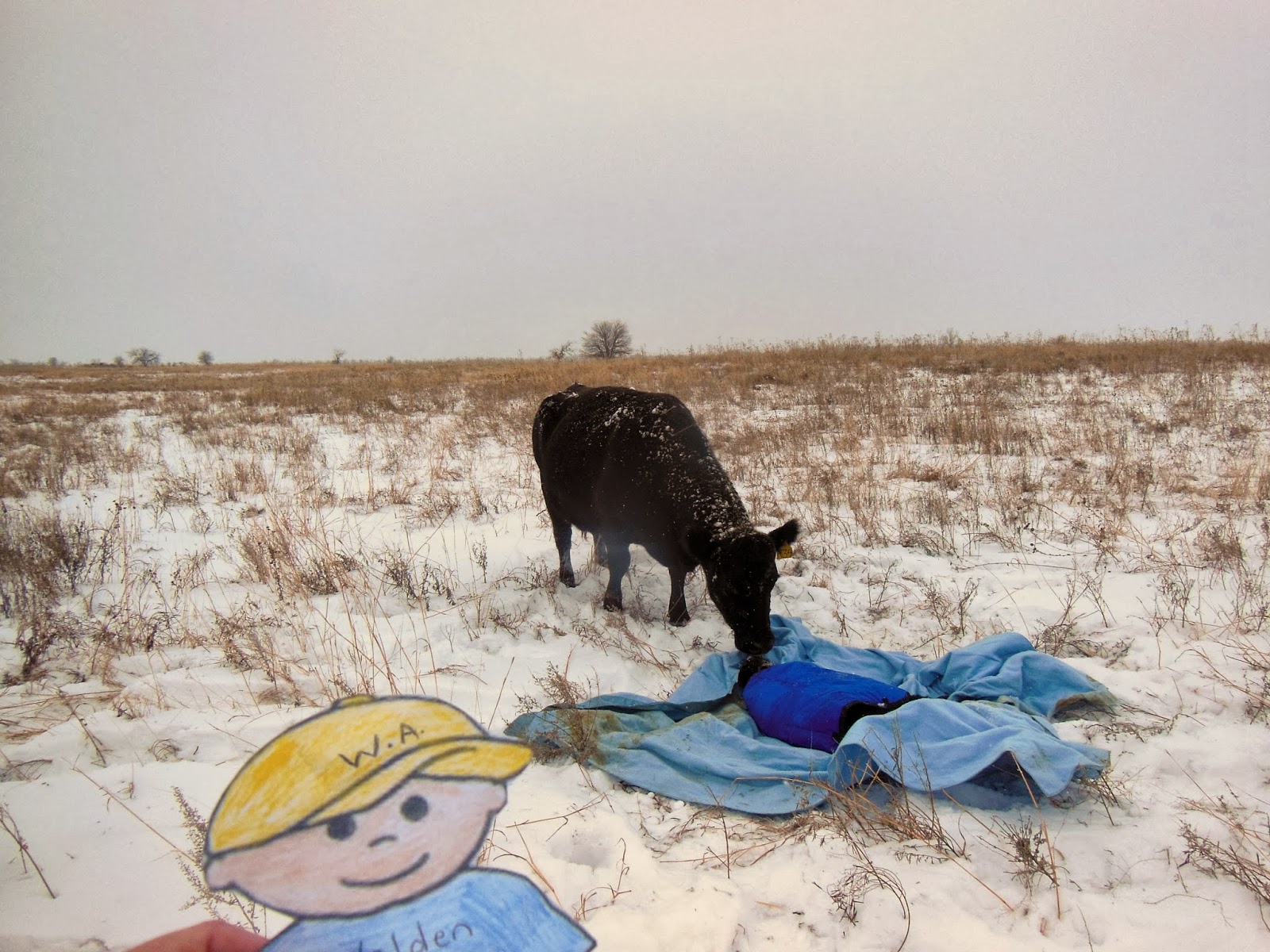 I was hoping that Aggie could report a happy ending to the classroom in California. I was already planning photos of the baby calf romping in the snow and and nursing its mama.

However, Monday morning, the baby calf was dead. Wind chills below 0 were too much for the baby to survive. So, I have a dilemma. Aggie is supposed to share what life is all about on a Kansas farm. The death happened, regardless of our best efforts. (It was actually the second death of a baby calf this past weekend in the cold, sleet and snow).

But, I am reluctant to share this much truth with a grade school class. We've been taking Aggie plenty of other places, too, so it's not as though this is the only story. However, it is part of our story. We've had more calf loss this winter than ever before. Besides being heart-wrenching, it's a blow to the pocketbook, too. At the cattle sale last week, baby calves were selling for $400.

So, what's your opinion? Tell the whole truth and nothing but the truth? Or only tell about the baby calf who did survive after getting similar treatment? I'd love your opinion. Let me know via the blog comments or weigh in on Facebook.
Posted by Kim at 8:01 AM