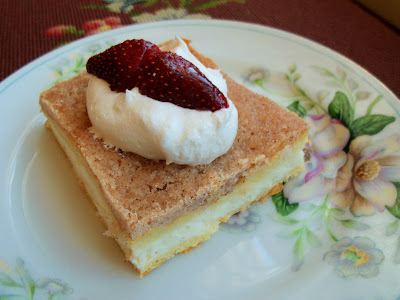 The only thing Mexican about this dessert is its name: Sopapilla Cheesecake. But on this Cinco de Mayo, that's what this Kansas farm wife of English and Scottish descent has to offer. There's not much in the way of authentic Mexican fare around here, though we do enjoy eating tamer versions of spicy entrees.
But I've made this dessert for three different occasions lately, and Cinco de Mayo seemed the perfect day to celebrate sopapillas and this recipe. Surely it's easier than making the actual thing, though I can't say I've ever tried making the authentic Hispanic dessert.

I served this cheesecake variation for a Nu Lambda meeting at my house, then made it for dessert for a joint meeting of Stafford and St. John's Beta Sigma Phi groups. Then I made two more for our family Easter celebration.

Press 1 can of crescent rolls into bottom of a prepared 13- by 9-inch pan. Mix cream cheese, 1 cup sugar and vanilla until creamy. Spread over rolls in pan. Cover with other can of rolls. Melt butter and stir in the rest of the sugar and cinnamon. Pour over top. Bake at 350 degrees for 30 minutes. Cut into pieces and serve. I topped each with a dollop of whipped cream, then decorated with a fresh strawberry.

This is from the cookbook, Journey Toward Excellence, a celebration of Skyline Schools' 40th anniversary.

And here's the step-by-step pictorial version of the recipe.

Step-By-Step Sopapilla Cheesecake
Press 1 can of crescent rolls into bottom of a prepared 13- by 9-inch pan. (I didn't get a photo before I started putting the cream cheese mixture on. Sorry!)

Mix cream cheese, 1 cup sugar and vanilla until creamy. Spread over rolls in pan. As I've said before, I don't know how I got along before without this little metal spatula. I use it all the time to get fillings even and smooth. 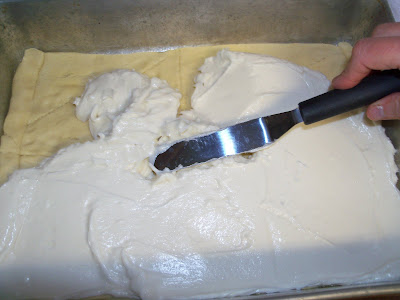 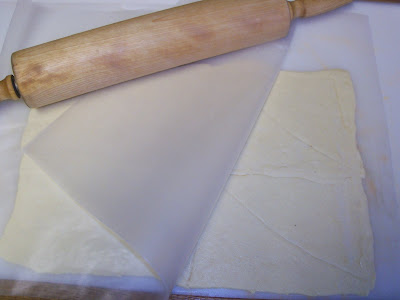 The hardest part is definitely getting the top crust on. I took off one of the waxed paper layers and placed that side down on the cream cheese filling. But it's still tough to get it on without it coming apart at the seams, so to speak. After you have it in position, peel off the other layer of waxed paper. 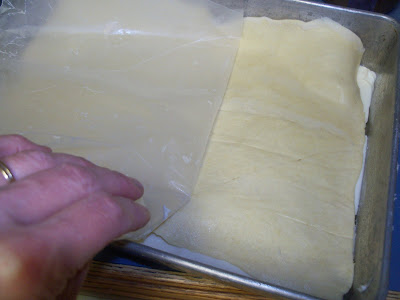 Then just use your fingers to piece the rolls back together and stretch it to cover the entire surface. 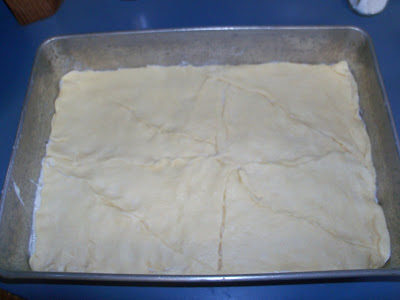 Melt butter and stir in the rest of the sugar and cinnamon. Pour over top. 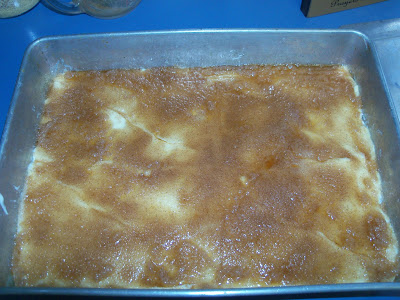 Bake at 350 degrees for 30 minutes. Let cool. Put in the refrigerator until ready to serve. Refrigerate any leftovers. 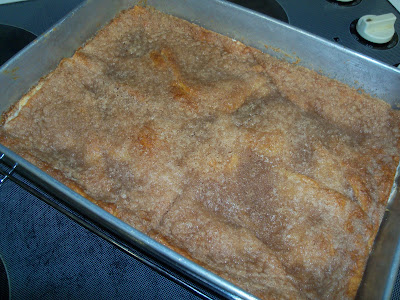 For a salsa recipe on this Cinco de Mayo, check out my sister's blog post from last year at Bauer Banter. And though my daughter isn't actively blogging anymore, check out her recipe for Chimichangas at Ladditude and Longitude. (Maybe she'll start blogging again ... hint hint!)
Posted by Kim at 6:45 AM