Injury update: Yes, indeed, I have a broken big toe. It has now been confirmed by an orthopedist, who said it will take at least six weeks to heal. I am now wearing a rigid-soled black shoe on my left foot after my encounter with the gate. After people see it, I'm sure the doctor's office will be flooded with requests for this stylish new footwear for spring. Though it is a pain - both literally and figuratively - I am thankful it wasn't worse. Thanks to everyone for your concerns. I feel loved!

So, after a momentary delay, here's the rest of the story:

The mama cows and babies have spent the winter closer to home. In Central Kansas, there's no vegetation in pastures during the winter, so they had "catered" meals pretty much every day as the guys fed them silage and hay. Plus, the guys are better able to check on the "maternity ward" when the cows and heifers are close by.

But during the past week or so, we've been gathering the cows and calves from various winter locations and transporting them to summer pastures.

The process varies by location. At the location we call the roundtop, we herd mamas and babies into a corral. 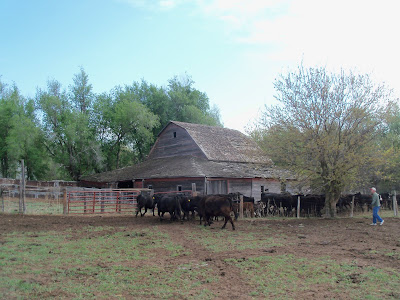 First, we had to sort off a couple of cows who didn't have babies and were going to another location. 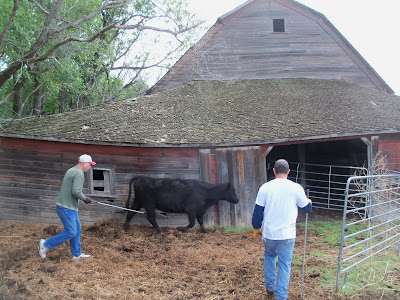 Then we separate the mamas and the babies. We do this because it's safer to transport the babies in a separate trailer so they aren't trampled by the moms.

But the cows and calves don't know that we're doing it for their own good. The mamas are very verbal in their displeasure that their babies are on the other side of the fence. 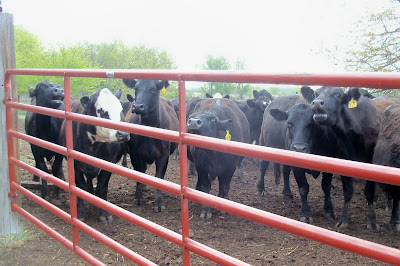 The calves don't seem nearly as concerned. Of course, if it was lunchtime, they might protest a little more. They do seem curious about why they are on one side of the gate and their own personal milk machines are on the other. 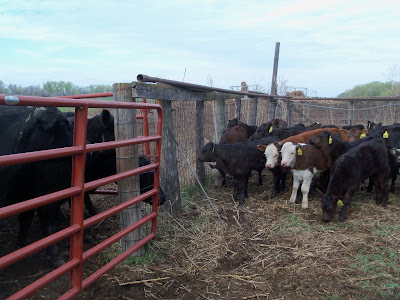 After the calves are in the trailers, Randy applies a fly deterrent to the babies. Again, it's to keep them more comfortable during the summer season. And yes, I asked why the mamas don't get the same four-star treatment (We mamas have to stick together, you know.) But as the calves nurse, the mamas have some of the mixture rub off onto them. As you can see, he follows a highly scientific process to assure that each calf gets the same amount of fly ointment ... or not. 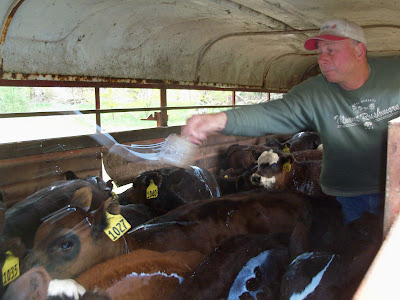 Sometimes, we have to add a step to the process and drive the pairs to the farmstead, so we have a place to sort and load the cattle. 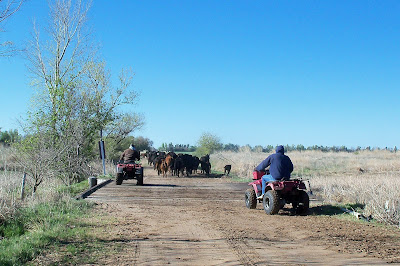 After a trailer ride, the pairs are reunited in the pastures. It takes several trips to get all the moms and babies transported. 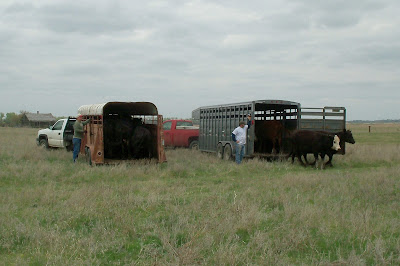 And there's a great mother and child reunion. 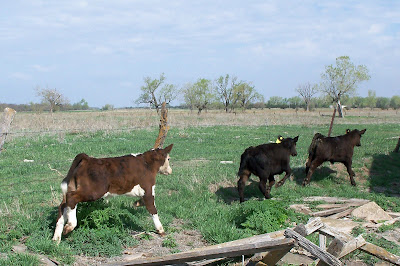 We need some rain to assure plenty of vegetation for summertime snacking. I wouldn't want anyone to go hungry. Not even F91, 397 or No Name.
Posted by Kim at 7:45 AM