What Makes A House a Home?

I have some new wind chimes hanging at my kitchen window. They are a bit tarnished and worn, but they are golden to me.

I gave those wind chimes to my Grandma Neelly for a long-ago birthday. She hung them between the living room and dining room at their two-story farm home, and they often tinkled a greeting when someone brushed against them at this busy traffic way in their home.

When I selected "treasures" from the house, I didn't initially take them. In fact, my Dad rescued them on the morning the excavator arrived. He had the wind chimes and a few other trinkets in his pickup.

I left the ugly orange vase. But this time, I couldn't resist the wind chimes. But the impact that she and my Grandpa had on my life was more precious than things. As the walls of their home crashed down, I remembered: 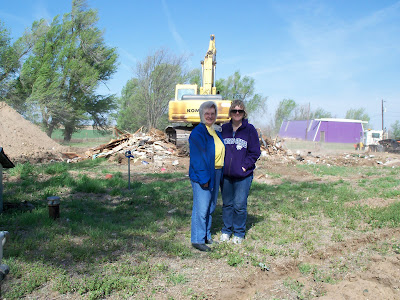 ** The candy dish. I'm not sure who took the candy dish. It was a black and silver plastic dish that sat on their kitchen counter for as long as I can remember. It certainly wasn't valuable ... except to kids who didn't have a candy dish at home. When my sisters, my brother and I would race in the back door, the candy dish was one of the very first stops. M&Ms were often the candy of choice. We left Grandpa's horehound candies alone. We weren't fans.

** My Grandma's kitchen window. Grandma spent a lot of time in the kitchen. And so I figure the things she had on the nearby shelves were special. One of the first things I selected as we were cleaning out the house was this little piano, which sat on a window shelf, and the spoon rest that sat on her stove. 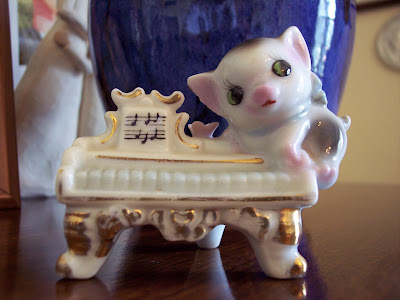 ** The chickens. My Mom grew up having to do chores related to chickens. She didn't choose to have chickens at our house. For us, it was a treat to take our buckets, go out the back door ... 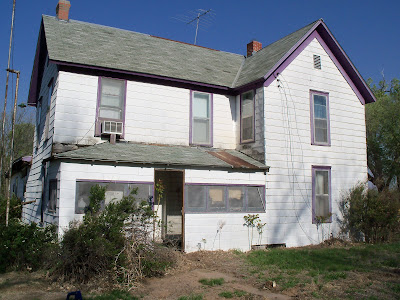 ... run to the chicken house and collect the eggs, though we were a little wary of some of the temperamental old hens. 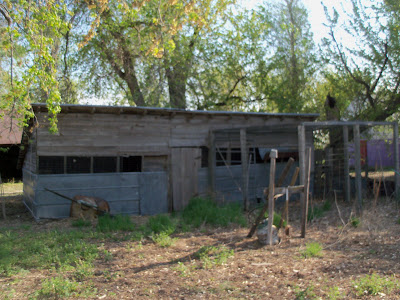 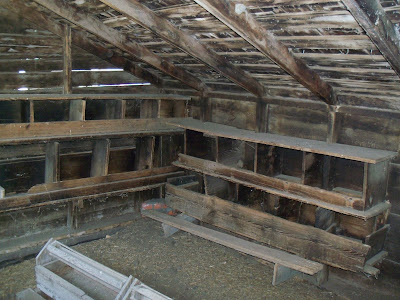 We also "helped" when my grandparents and mom would harvest the chickens. My Grandma was a small woman, but she was mighty when it came to wringing the chickens' necks with the flick of her skilled wrist.

My grandparents had a stove in the garage where they would process the chickens. As I stood at the door into the garage, just before the walls came crashing down, I could almost smell the wet chicken feathers and feel the heat of a summer day as my siblings and I plucked feathers (albeit not as swiftly or as well as my Mom and Grandma).

** Those chickens made the best chicken and noodles I've ever tasted. My Grandma made homemade noodles. I remember walking into her kitchen after church and seeing the noodles drying on clean tea towels. I still love chicken and noodles, though I have never been able to duplicate the taste.

** My grandma made the best angel food cakes from scratch. That is a skill that missed my generation, too. Jill and I attempted an angel food cake for a 4-H foods project once. We turned it upside down on a pop bottle, just like my Grandma used to do. Ours fell out onto the kitchen counter. Hers never did. Angel food cake was my cake of choice for birthdays. ** And while we're fixated on food, I loved her green apple pie. There always seemed to be a layer of sugary goodness between the crust and the green apples. Those green apple trees also provided plenty of fruit for the simple cooked apples she made on her stovetop, adding butter and brown sugar to the quartered fruit. On good years, we'd gather brown grocery sacks full of the green fruit. It wasn't as perfect as the fruit from the grocery store's produce section, but it was far tastier.

** Grandma's Pear Honey: One reason we planted pear and apple trees south of our house was because of my childhood memories. Grandma made pear honey from the fruit gathered from the trees at their farmstead. I made it once. I don't usually can or make jelly, but I sure enjoy eating the pears (if I can get them before the varmints do)!

** Homemade ice cream. For years at Grandma's and Grandpa's, we used a hand-cranked ice cream freezer. We'd all take our turn cranking the handle and anticipating the creamy goodness for a special occasion. Somebody finally got smart and got them an electric freezer. Homemade ice cream for birthdays is a tradition my mom continued with us and then I continued with my own family. And for the record: We rarely make vanilla. Probably my favorite of my Grandma's varieties was banana.

** Grandma would be appalled to know that one of my food memories was having frozen pot pies. We'd get to choose our flavor of pot pie and then instead of eating at the table, we'd get to eat on TV trays in the living room and watch "The Wonderful World of Disney" or "Lassie." I think Grandpa Neelly was just as concerned about what was going to happen to Lassie that week as we were ... hence the TV trays!

** Living only seven miles away, my grandparents often babysat when my parents went out or had meetings out of town. Grandma would make Jiffy Pop popcorn on the top of the stove. We'd watch the foil packet expand and then would eat the tasty snack in brightly colored metal bowls. I had to bring those bowls home, too. (And a sidenote: Randy's Grandma Ava had the same bowls and tumblers, so they are a memory for him, too.) 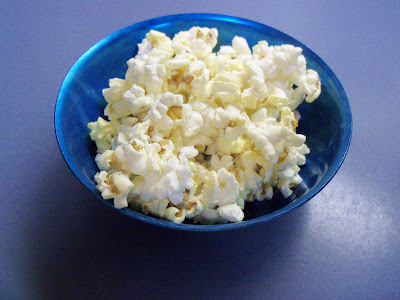 ** Those metal bowls also held Party Mix on New Year's Eve. It was quite an event to get to stay up late and have snacks way after our usual bedtime.

** Breakfast was different at Grandma's house, too. She would make poached eggs, bacon and toast. And we'd get to have coffee! Granted, there was probably more milk than coffee in those cups, but we were so grownup to be sipping that very adult beverage in the morning ... even if Grandpa would gravely intone, "It'll stunt your growth."

** With all those food memories, you'd think that's the smell of Grandma's house that I remember. But ... hold on a minute. Even the best food can't hold a candle to the aroma of Cramergesic ointment. Grandpa Neelly believed it cured everything. (He probably would have told me to put it on my broken toe.) He was a coach and an athlete, and he used it to cure all sorts of aches and pains. He was also good at self-diagnosis. It's a running joke in the family: When someone makes proclamations about what is ailing them, we call them "Dr. Neelly."

** My Grandma had a green thumb. I didn't inherit it. But I can't see purple iris without thinking of her. She also enjoyed planting roses in her front yard and often chose new varieties to try out. 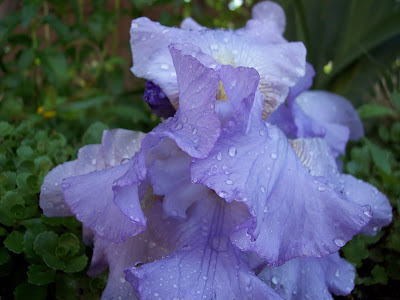 **PURPLE: The irises definitely weren't the only purple things on the farmstead. Take a look at that photo of my mom and me again. See the purple shed in the background? Grandpa, a K-State football player back in the 1920s and '30s, loved K-State. He literally painted the farmstead purple. Our family addiction to all things purple comes quite naturally.

** My grandparents had a large vegetable garden. I am lucky to raise a few tomatoes and peppers. Strawberries - plucked from the plant and popped directly into my mouth - were my favorite. But yellow pear tomatoes were a close second. My grandpa was highly opinionated about his planting schedule. Potatoes were to be in the ground on St. Patrick's Day. The Farmers' Almanac was the gardener's gospel.

** My grandma was a tireless worker in the WSCS, the women's church group which eventually became United Methodist Women. She not only served locally, but she also held state offices. She was always typing up one report or another on her manual typewriter set up in the front bedroom. And she rolled sheet after sheet of paper into the typewriter so I could write, too. Who would have thought all that plucking around on the typewriter would lead to a writing career?

** Family celebrations. There was lots of history recorded in the walls of that old farm house. Lots of babies sat in that old pink high chair. 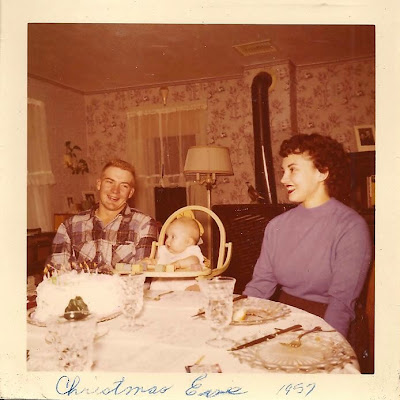 ** Life lessons. I remember one time telling my mother that Grandma had served us milk for our noon meal, so we wouldn't need it at suppertime. My sister informed Mom that we had not had milk at dinnertime. My mother called my grandma to find out. Let's just say it was a valuable lesson in truth telling. (I was the one who lied, by the way.)

It's definitely not the only life lesson I learned at Grandma and Grandpa's house. What life lessons did you learn at your grandparents' house?