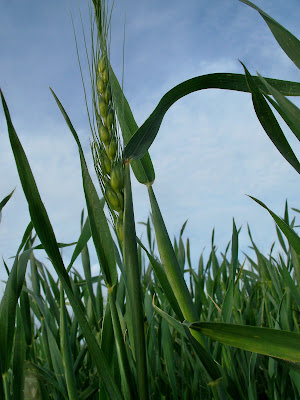 Photo taken on the Stafford/Reno County Line, May 2, 2011
When the wheat begins to head, it usually signals a time for producers to look forward to the upcoming harvest.

My farmer is a known optimist, a good quality to have for someone whose livelihood depends on weather and a myriad of other uncontrollable factors. But even he is backpedaling on predictions for the 2011 wheat crop.

Simply put? The crop needs rain. In Central Kansas, a good soaking rain as the wheat head fills could still give us a good crop, though not a bin buster by any means.

But for many in Western Kansas, it's too late for this crop. Still, nobody would turn down a rain to help bolster spring-planted crops and create lush grasslands for summer pastures.

When weather forecasters start using terms like "Dust Bowl," it's not good for farm country. Three weeks ago, AccuWeather reported:

"Following what has been the driest four-month period since before the 1930s Dust Bowl, hope is dwindling, if not already lost, for wheat farmers of Oklahoma and Texas who desperately need rain. The forecast is not looking promising."

The news isn't any better from western Kansas. 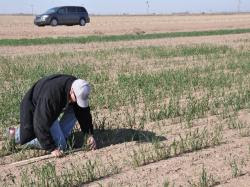 The image above is from DTN reporter Katie Micik, who was on the Wheat Quality Council's annual Hard Red Winter Wheat Tour May 2-5. The photo is from a wheat field near Sublette in Haskell County.

While our wheat crop here in Central Kansas is much better than that found in Western Kansas, it's definitely gone backwards in the past three weeks. Three weeks ago, Randy used a formula to determine our crop's potential at 40 to 50 bushels per acre.

But, with no rain on the crop, it stunted the growth. Now, he estimates the yields at half that amount. The wheat plants are fairly short, which will make it more difficult to harvest. 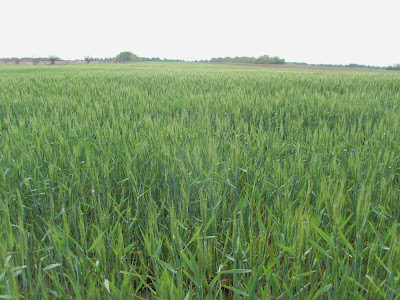 And if we don't get a rain as the heads fill, the wheat will shrivel in the head, lowering both yield and test weight.

As the Wheat Quality Council tour came to an end last week, participants estimated the 2011 Kansas wheat crop to have an average yield of 37.4 bushels per acre.

The average of participants' crop estimates puts Kansas wheat production at 256.7 million bushels. The tour's estimate is lower than last year, when the state produced 360 million bushels, with an average yield of 45 bushels per acre, according to the U.S. Department of Agriculture.

But there's still a lot of days between now and harvest in mid- to late June. And the seven-day weather forecast doesn't look promising for this part of the world. I know some of our friends to the east in the Corn Belt would gladly share the rain that is flooding fields and preventing their spring planting.

Here's praying for the rain we need and for dry, blue skies for the producers who wish they could turn off the spigot. We're not picky, are we?
Posted by Kim at 6:00 AM