The Good Stuff? I Beg to Differ 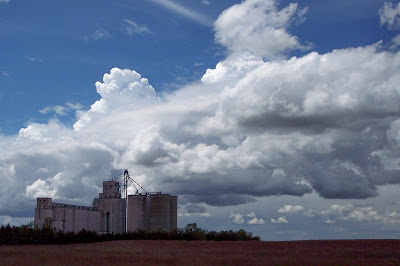 Every day, I feel blessed to live where I can see God's creation evolving with the shifting seasons. Too often, people see Kansas as a flat, uninteresting place that just provides miles to go before you get to the mountains of Colorado or the lakes of Missouri.

I'm all for tourism in Kansas and helping others see the beauty and complexity of the beautiful place we call home.

But I just can't understand one popular form of tourism in Kansas these days. I suppose that storm chasing brings an infusion of some cash to gas stations, restaurants and motels in the Central Plains. But, to me, storm chasing just capitalizes on the pain and tragedy of others.

I don't want some adventure-seeking tourist hoping for that big storm that will give him a thrill for a few minutes.

Those storms take people's lives and property. I was heartbroken to learn that Tuesday night's storms took the lives of two members of a fellow Stafford County 4-H family and seriously injured another. Linda Gleason and her son, Jeffrey, were killed when a cottonwood tree, 4 feet in diameter, was toppled onto their vehicle by a tornado. The St. John family had pulled into a driveway to try to weather the storm. Kristin, who just graduated from K-State, was seriously hurt. I keep praying for her and for her dad, Jim, who now have to pick up the pieces of their lives.

The Stafford County Fair just won't be the same. The Gleasons and I had a contest for whose face could get the hottest and reddest first in the unairconditioned confines of the fair's 4-H building. They were superintendents of the 4-H arts and crafts department. I am across the way in the foods department.

Jeff (just like his sister Kristin before him) was a consummate baker and always had multiple entries in the 4-H foods division. With a mom who was a former county extension agent, they were always meticulously prepared. Jeff also had a gorgeous voice. The judge at the Stafford County 4-H Club Days this spring told him that he could do anything he wanted with that voice. I guess he's using it to sing with heaven's angels today.

I realize that some of the storm chasers are meteorologists collecting data to try and keep us safer. That's different than the people who are leading tours and charging folks anywhere from $2,000 to $6,500 to catch a glimpse of a tornado.

I know that the tourists aren't to blame for the storms. But it still infuriates me to read things like this on an msnbc.com website:

"Well, it's a rush," explains tornado tourist Mark Reese, from England, who was interviewed in Pratt. "In the UK, we don't get the big storms or the severe weather you get over here. This was the place to come to get the good stuff."

The good stuff, huh? I beg to differ. Let's ask Jim & Kristin Gleason ... or the residents of Joplin, Mo. ... or the people of Reading, Kansas ... or people still rebuilding their lives in Greensburg ... or the people of Chapman ... Unfortunately, the list goes on and on and continues to grow this spring.
Posted by Kim at 6:45 AM